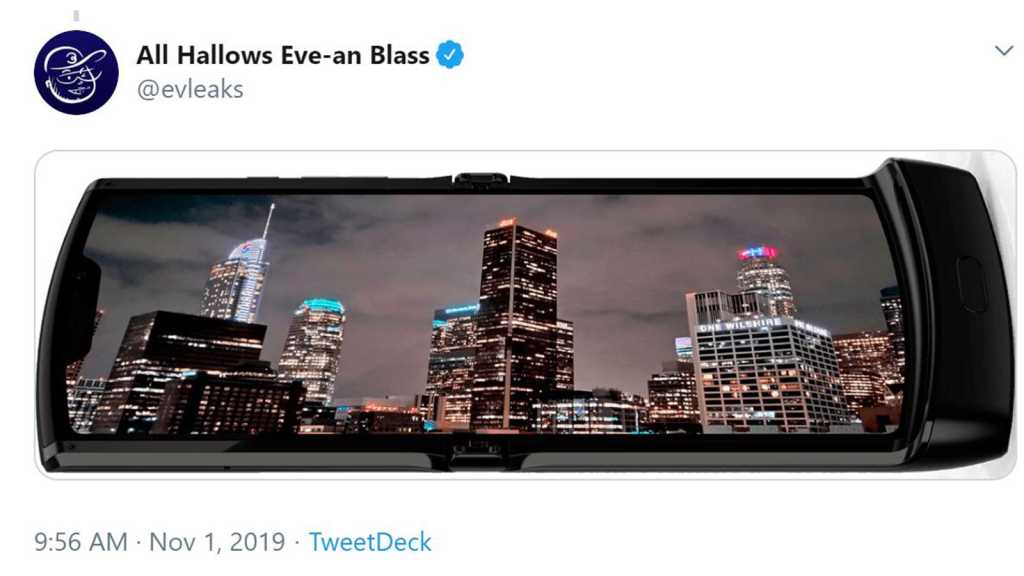 After a few months of concept images and sketchy details, full official looking renders of the Motorola razr foldable phone have leaked (courtesy of @evleaks). The images show a flip phone design with an internal folding full display instead of the numpad of a traditional flip phone:

Leaker Evan Blass backed up the images with the assertion that the branding will be ‘razr’ as opposed to ‘RAZR’.

Motorola, which is owned by Lenovo, had previously sent out invitations to a press event for 13 November in LA  where the device will be announced. It will ape the design of the iconic Razr flip phones that first hit shelves in 2004 and redefined mobile phones, making them expensive and, well, sexy.

When unfolded the phone will likely have a crease at the fold which is not shown in these renders. The images of the phone show a notch at the top that will likely house front facing cameras, and it seems like the display will lie flat rather than angled like a normal flip phone.

An image of the outside display of the phone may be touch sensitive, and is shown running the Android Messages app. There’s also a camera housed in this section.

Suffice to say – we all want one. We just hope it’s well built and not as fragile as the Galaxy Fold has proven to be. But we assume it will come with a mad price tag.