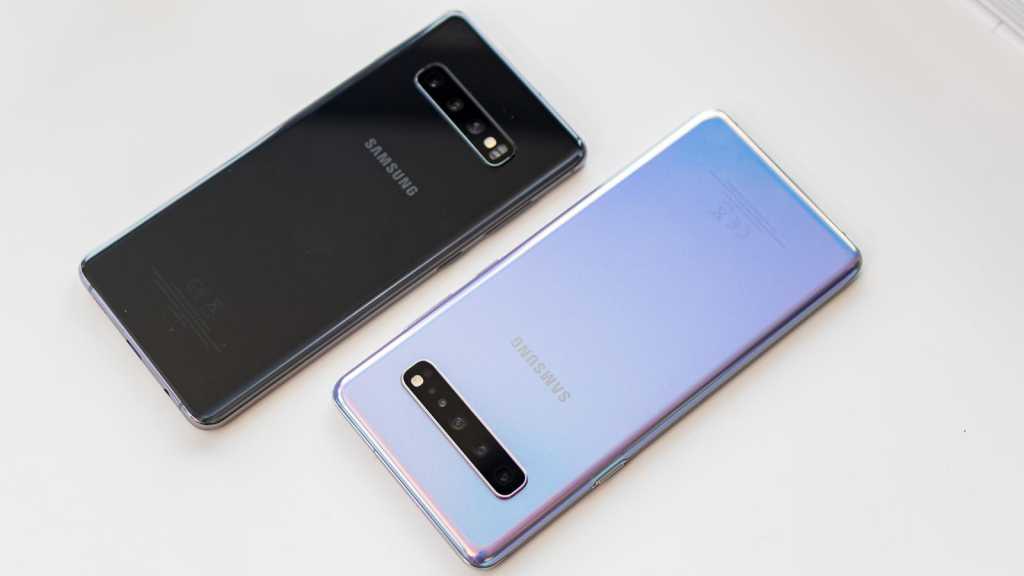 Samsung vs Apple is one of the oldest rivalries in tech, especially on the phone side of things with even insulting TV ads. Choosing between the smartphones can be tricky so here we compare Galaxy and iPhone to help you find the right model.

There are many many smartphones that come under the terms ‘Galaxy’ and ‘iPhone’, especially the former. So here we’re focussing mainly on the flagship level models, but we will include some more affordable options as well as mentioning whether it’s worth buying previous generations.

We’re sticking to the more mainstream models here but Samsung also has its Galaxy Fold, which is a dual-screen folding phone at £1,900/$1,980.

Generally then, Apple and Samsung have a wide range of options depending on your budget. There are far more Galaxy devices though, as we haven’t even mentioned the Galaxy A series which covers the budget and mid-ranges with many, many models to choose from. Check out our best Samsung Galaxy phone chart.

If you want a cheap iPhone, you’ll need to opt for an older generation. Directly from Apple, this means getting the iPhone XR or even older iPhone 8 (and Plus) – the latter we wouldn’t recommend even at £479/$449.

View the iPhone range at Apple.

View the Galaxy range at Samsung.

On the whole, many design features of the Galaxy and iPhone ranges are the same or similar. They all use a combination of metal and glass and all have IP68 waterproofing.

Of course, there are a range of sizes available depending on how big you like the screen – we’ll talk about that more below – but the key differences here lie in the small details.

The humble headphone jack is only available on the Galaxy S10 range, so if you get a Galaxy Note 10 or iPhone 11, you’ll need to use an adapter or a pair of headphones which fit the port. Both Apple and Samsung supply compatible headphones in the box.

It’s also worth noting that the iPhone’s all have a traditional notch which is quite wide, while Samsung opts for what’s known as a ‘punch-hole’ method which involves the screen going all the way around the camera.

There’s no objectively correct way to make the best smartphone screen. It really comes down to how big you need it and what you like to use a smartphone for the most. Here’s what’s on offer from Apple and Samsung in the display department.

The main things to point out about the iPhone 11 range, apart from the notch, is that the iPhone 11 Pro models have brighter screens than the regular model along with OLED tech, a higher pixel density (458ppi) and support for HDR10 and Dolby Vision. They all have a 19.5:9 aspect ratio, wide colour gamut and 120Hz touch-sensing.

They offer always on features and a key thing, apart from the S10e is having curved edges at the sides. They not only feel nice to the touch but also add value with features like Edge Panels and lighting.

As mentioned earlier, Samsung embeds the front facing camera in the screen on all the S10 and Note 10 models. It’s really up to you whether you prefer this or Apple’s regular notch.

There’s plenty of choice, whether you go for Apple or Samsung.

We don’t want to go into performance too much, largely as depends what you’re doing with the phone and the bottom line is really that all flagship phones these days offer slick day-to-day usage.

We could give you a load of benchmark results, but a few frames here or there in GFX Bench shouldn’t affect your choice half as much as other elements.

What is likely more important to you is how much storage is available and whether you can add to it. We’ve already mentioned that you’ll need to go with Samsung to get a microSD card slot. It’s something Apple is unlikely to ever add to the iPhone.

You’ll also get more storage as standard with at least 128GB on the S10e and 256GB on the Note 10. You can even get 1TB on the Galaxy S10+. Higher capacities can be hard to find, though.

When it comes to cameras, Apple and Samsung are on a very similar approach this year with the cheapest models (S10e and iPhone 11) offering a dual camera setup at the rear. That’s regular and ultrawide.

The rest of the flagship range has an additional telephoto camera making a trio of options. There are loads of camera specs to dig into but you’ll get optical image stabilisation (OIS) on the cameras that aren’t ultrawide and 4K (2160p) video recording.

Apple’s iPhone 11 range offers an innovative way of recording video where it actually records on multiple cameras at the same time, allowing you to switch between views like a film director.

At the front things are also pretty similar with a 12Mp on the iPhone 11 range and 10Mp on Samsung. The only phone to have two front cameras is the Galaxy S10 Plus which has a secondary 8Mp depth sensor to help with portrait mode.

While we could drown you in megapixels and apertures, here’s what’s important.

In terms of image quality, the iPhone 11s stand at the top of the pile. Images are super sharp, portray accurate colors, and capture pleasing exposures in both photos and videos.

Between the two Samsung Galaxy lines, the Note 10 is a marginal improvement over the S10, mainly when it comes to properly exposing subjects. Quality still lags a bit behind the iPhone line, but the default camera app experience is faster and more feature rich on all of the Samsung phones compared to Apple’s camera app.

We could look at battery capacities but this is an unfair comparison due to the way iOS and Android use juice differently. Higher capacities in Plus/Max models are going to last you longer, of course.

It will also depend on how you use a phone. Loads of gaming means you’re unlikely to last a full day.

Our testing has shown that the Samsung Galaxy S10 range has somewhat disappointing battery life, while the Note 10 range is better – especially the Note 10+. Apple’s battery life on the iPhone 11 range is impressive.

These days, charging is almost as important as the battery life and it’s no surprise that all the iPhone 11, S10 and Note 10 models come with fast charging and wireless charging.

Samsung does pip it overall here with 15W wired on the S10 phones and 25- or 45W on the Note 10 (although you’ll need to buy at 45W adapter separately). Wireless charging is also faster at 15W across the board apart from the regular Note 10 which is 12W.

Some of the things that might swing it for you are features that you simply can’t get if you opt for one or the other. We’re not talking about the obvious difference here, which is iOS or Android although see below for some highlights.

For example, the Galaxy S10 range all support microSD cards so you can add more storage. The Galaxy Note 10+ does, too, but not the smaller model which is unusual for Samsung.

You might also want to consider the fact that the Galaxy Note 10 range support the S Pen stylus. Depending on your usage, this could be a real boon, especially if you want to do a lot of writing on your phone.

DeX is another Samsung exclusive on flagships (apart from the S10e) and is short for desktop experience. It means you can plug the phone into a monitor and use it in a similar way to Windows 10.

Samsung is the only brand here to offer 5G if you want to make use of the latest generation of cellular network. You’ll need to live somewhere with coverage but even if you don’t, you’ll be future proofing if you plan to keep your phone for a few years.

As mentioned in previous sections, some Samsung devices have headphone jacks and/or curved displays.

Choosing which operating system to use is a huge part of the Apple vs Samsung debate. Although we could write thousands of words comparing all the minute differences, here are the key things to consider along with highlights for each.

In Apple’s favour, iOS has long been known for its easy of use as well as excellent app support. Many apps and games will come out on iPhone first before Android or are exclusive. Apple Arcade is a decent reason to opt for Apple, especially if you have other i devices to play the games on.

You’ll also get quicker software updates on iOS and likely for more years than Samsung. Plus you’ll be able to choose between various smartwatches since it’s not just the Apple Watch that’s compatible.

Some exclusive features of iOS include Animoji, Memoji and Screen Time. Oh, and Siri of course.

Samsung runs its own One UI version of Android which comes with a bunch of different features which the firm has added. This means you get the Bixby digital assistant, although we prefer the Google Assistant over both. Android is also considerably more flexible and customisable compared to iOS.

You’ll also get things like Edge Panels which use the curved sides of Samsung’s displays (apart from the S10e) and various bits of software which use the S Pen if you get a Galaxy Note. As mentioned earlier, DeX might also come in useful for some people.

As mentioned previously, they all include Wireless PowerShare to reverse wireless charge other devices.

For the iPhone 11 range, you’ll get 18W wired charging but the adapter is only included with Pro models. The regular edition has a measly 5W plug. On the wireless side, they phones are lagging behind at just 7.5W.

Although we’ve been focussing on the current flagship ranges, you might also be considering older generations. Especially since Apple keeps some of them on sale at lower prices.

On the iPhone front we’d say the XR is still a decent choice. It’s only a year old and the iPhone 11 – effectively its replacement – doesn’t add a huge amount. We’d avoid the iPhone 8 series which arrived in 2017 unless you really can’t stretch your budget.

In contrast, Samsung phones drop in price without new models arriving on the scene so you can often pick up a current-gen model at a lower cost to the RRP. This also means older phones are even cheaper.

Going for a one year old Galaxy S9 or Note 9 model could mean getting a bargain and like the iPhone XR, they’re still excellent phones with not all that much missing in comparison with their newer siblings.

In some cases, you might even be better off with the Note 9, for example, having and headphone jack.

We’d avoid going any older than previous generation if you can. In Samsung’s case, you’re better off spending a similar amount of money on a Galaxy A phone instead.

There are so many factors involved when comparing these phones, that there’s no easy way of saying one is the best. As usual, it depends on what’s important to you and how much money you have to spend.

A key decision between the two companies is whether you prefer iOS or Android.

If that doesn’t decide it for you then Apple offers slick, easy to use experience with a wealth of top (often exclusive) apps and lures like Apple Arcade. You’ll pay a little more in general, especially if you’re upgrading to higher storage capacities but you get slightly better cameras and, in general, more reliable battery life.

Samsung, if you like Android, offers better value on the whole and has a number of features which you won’t find on iPhone. These include a fingerprint scanner, Wireless PowerShare, DeX, expandable storage and 5G.