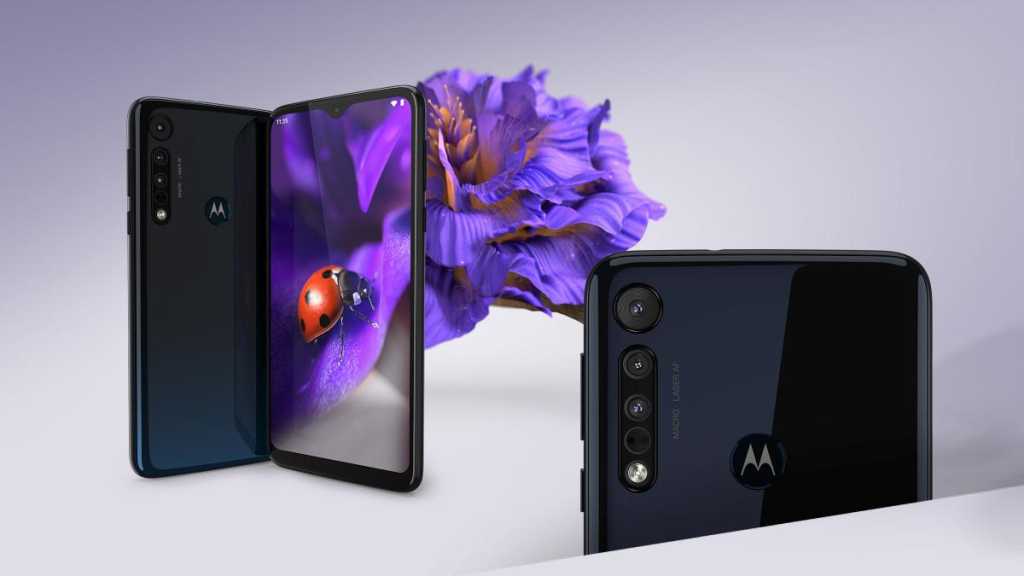 Motorola has just announced that the affordable Moto E6 Play, Moto G8 Plus and the Motorola One Macro are all launching globally today.

The Lenovo subsidiary has been working hard to turn its profits around in recent years and with numbers finally on the up, it’s now doubling down on its run of affordable Android smartphones, all of which pull in premium features. This latest batch of phones spans three tiers of the company’s current target audiences, with the Moto E6 Play falling in at under £99, the One Macro at £179 and the Moto G8 Plus also landing at an affordable £239.

Here’s what each of these three phones brings to the table.

Joining the Moto E6 Plus, which arrived back September, the E6 Play sports similar makeup, wrapped up in a more compact package. The phone’s form is dictated by a 5.5in 18:9 HD+ ‘Max Vision’ display. It features a notched front camera, 32GB of internal storage with microSD expandability, optional dual SIM functionality and a, for the hardware at work, a sizeable 3000mAh battery.

Flip the phone over and you’ll find a fingerprint sensor and a 13MP primary camera that offers intelligent shooting modes like single-lens bokeh, when shooting portraits and HDR capture.

While the company is keeping schtum on the rest of the latest generation of its incredibly popular Moto G line for the time being, the most prominent member of the lineup, the Moto G8 Plus, is now out in the open.

Like Motorola’s One series devices, the highlight here is the G8 Plus’ Quad Pixel camera setup, which combines four sensors for an enhanced photography experience versus its predecessors.

The 48MP sensor that’s been utilised by all manner of Android smartphones over the past year, including the likes of Motorola’s own One Vision, and it fronts the setup on the G8 Plus too. It’s accompanied by a depth-sensing module and a laser autofocus module, as well as a separate 170-degree ultrawide-angle ‘action cam’ sensor – a trait pulled directly from the aptly named Motorola One Action.

Motorola’s also placed a focus on the phone’s audio chops, with Dolby-tuned stereo speakers that the company claims are twice as loud and deliver double the bass of the phone’s predecessor, the G7 Plus.

To round out the experience, the phone possesses a new octa-core Snapdragon 665 chipset – the most powerful of Qualcomm’s mid-range 600 series processors, 4GB of RAM and 64GB of internal storage with microSD up to a further 512GB.

A large 4000mAh battery also resides inside the G8 Plus, complete with 18W TurboPower charging, which on paper delivers eight hours use from just 15 minutes charge time.

To round out this new trio, the Motorola One Macro, which previously enjoyed launch exclusivity in India earlier in October, is now available globally.

As the name implied, the focus is the phone’s 2MP macro camera, which is capable of capturing up closeup subjects up to five times closer than the competition. This comes supported by a more conventional 13MP sensor, alongside laser autofocus and a depth sensor – as on the Moto G8 Plus.

The phone also boasts AI-automated composition suggestion and editing by way of its MediaTek Helio P70 chipset and 4GB of RAM. Storage again mirrors the G8, with an expandable 64GB, as well as a 4000mAh battery, however, fast-charging drops to 10W here.

For a full rundown of the features and capabilities of Motorola’s three newest entries, stay tuned for our full reviews. In the meantime, if you’re already tempted by what’s on offer, the Moto E6 Play launches at £89/€109, the Moto G8 Plus at £239/€269 and the Motorola One Macro at £179/€199.

US pricing and availability is coming but hasn’t yet been formally announced, we’ll update this piece once the information is released by Motorola.