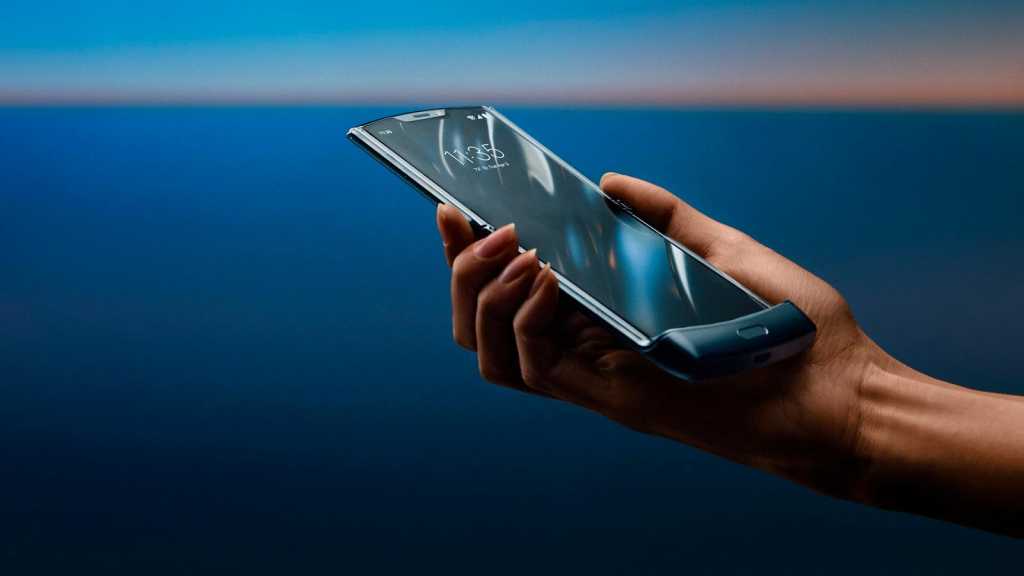 The Motorola Razr is arguably the most iconic flip-phone of all time, and just like Nokia with the 3310, the phone is back with a new incarnation. The new Razr is the folding phone everyone is going to want, so here’s what you need to know.

It was back in 2004 that Motorola first launched the very popular Razr V3 so it’s great to see it back years later in this modern form.

When will the Motorola Razr be released?

This new edition might be known as the ‘Razr 2019’ but it wasn’t actually available in 2019. It was originally meant to be available to pre-order in December 2019, but the company delayed the launch citing high demand.

Then, on 22 January 2020, Motorola officially made the Razr available for pre-order in the UK, it’s exclusively available via EE, with the headline contract offering 60GB of data along with unlimited calls and texts for an eye-watering £99 per month with a £50 upfront fee.

There’s no actual shipping date in place in the UK just yet, but the EE site states that it’ll be made available within 28 days, so we don’t have long to wait now!

In the US, you’ll could pre-order the Motorola Razr from 26 January 2019, with shipping beginning a little over a week later on 6 February 2019.

How much does the Motorola Razr cost?

Foldable phones aren’t cheap so it’s perhaps no surprise that the Razr 2019 is set at $1,499. We’re waiting for a UK price but expect it to be around the same figure.

While the Galaxy Fold and Huawei Mate X open and close along a vertical fold, the Razr sticks with that classic horizontal design which the original was so well known for. Motorola said it developed and tested over 20 different prototypes with the clamshell being the perfect solution.

So instead of a screen above the hinge and a set of buttons below, the Razr 2019 is all screen. It also has a smaller display on the outside. 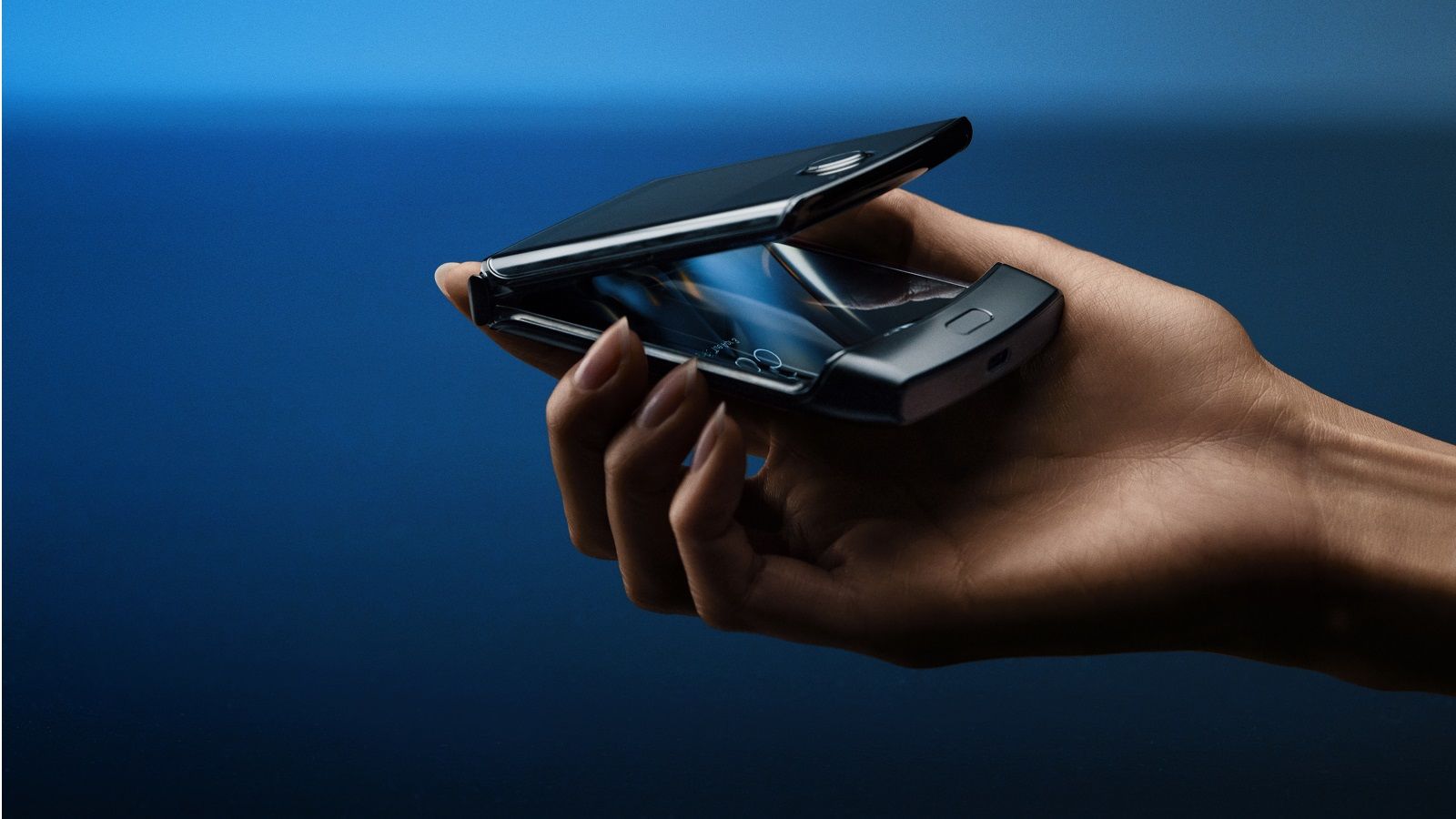 This new Razr is made from stainless steel and Gorilla Glass and the zero-gap hinge is patent-protected. Motorola says both sides of the custom polymer display sit perfectly flush when the phone is closed, protecting the screen from any dust or dirt.

CNET ran the Razr through its FoldBot folding test, and had to call it quits after 27,000 cycles, which would suggest it would not last the average user would not survive a year or two of normal use. It had hoped to reach 100,000 cycles, and has previously managed 120,000 on the Galaxy Fold. However, it admits that its machine may not have been properly calibrated.

Motorola has also engineered antenna to fit into a space half the size of most modern phones and there’s a water-resistant coating, too.

We’ve recently seen images of the new Razr in gold as well as the black version that’s available to preorder, and it looks stunning: 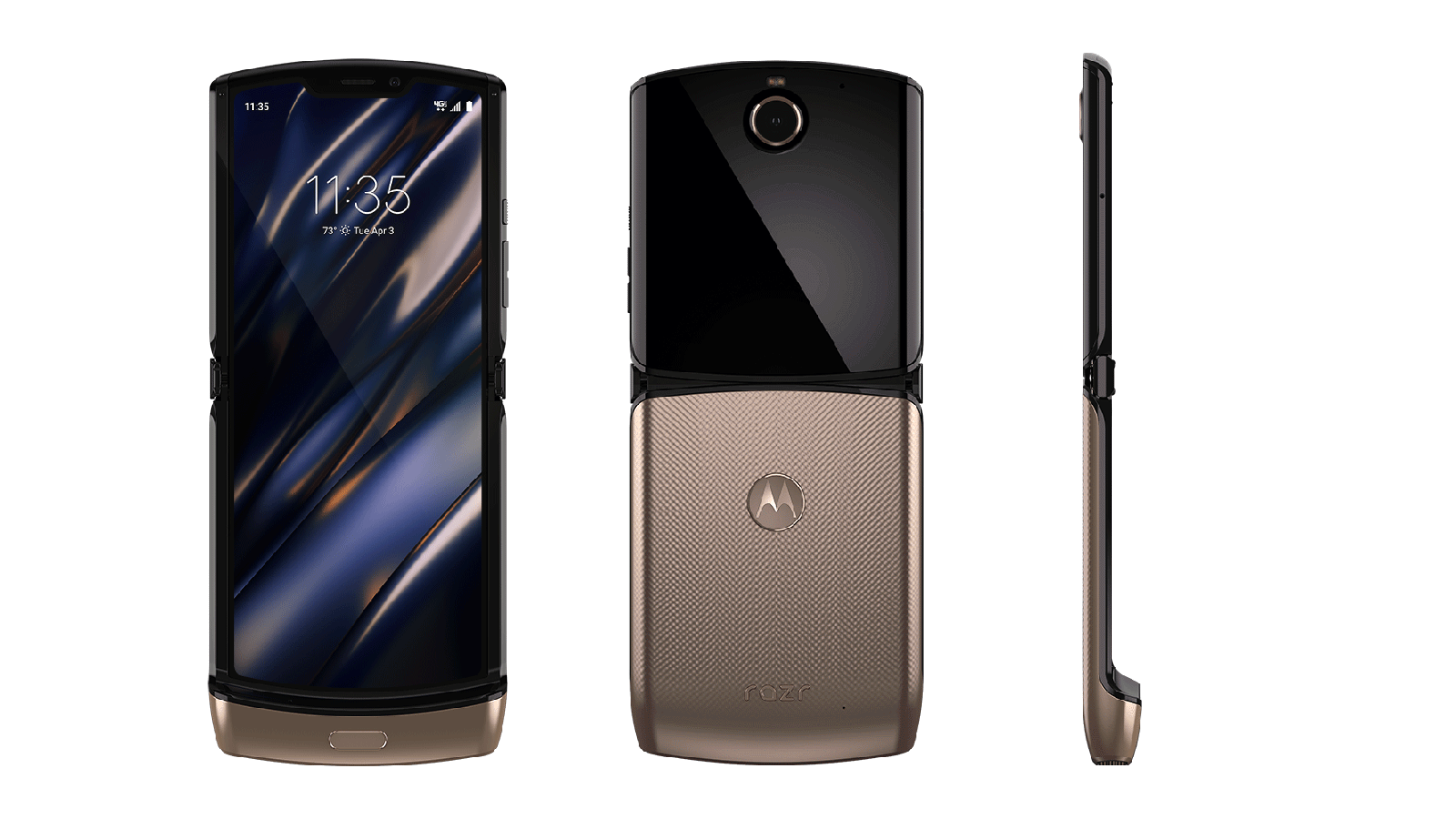 Originally eaked by Evan Blass, this ‘Blush Gold’ model has now been confirmed by Motorola and will be available in the Spring. Pricing has not been confirmed.

Let’s start with the displays so the main display is 6.2in with Motorola calling it the Flex View. It used OLED technology and has a tall 21:9 aspect ratio with a 2142 x 876 resolution.

And yes, you can hang up a phone call by closing the phone just like the old days.

On the outside is a 2.7in Quick View display so you can still get info and get things done without opening the Razr up. You can do things like make calls, reply to messages, control music and take selfies. 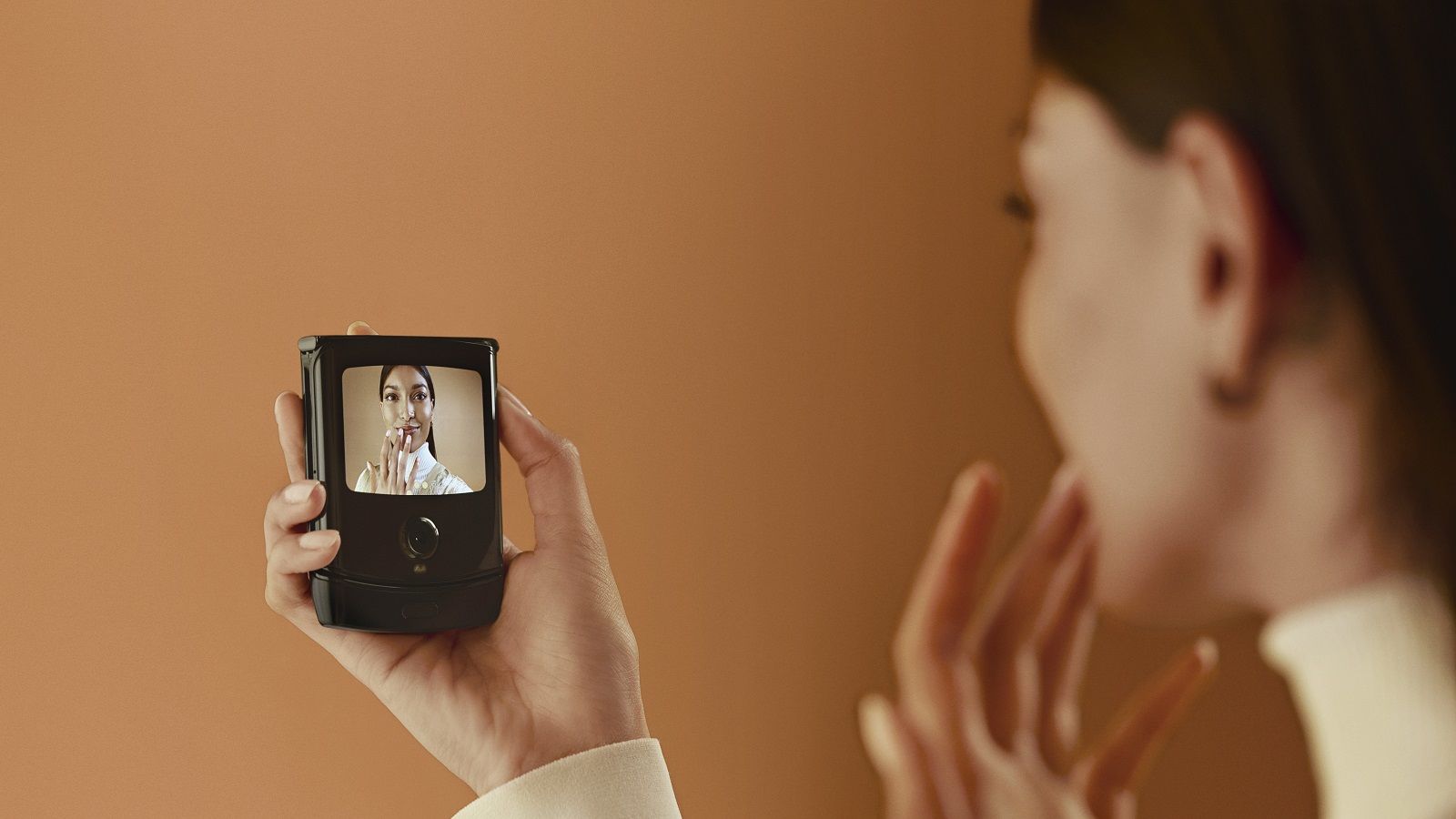 Elsewhere, the Razr is powered by a Qualcomm Snapdragon 710, not one of the firm’s higher-end processors so users might be disappointed to get a mid-range chip at this price. There’s 6GB of RAM and 128GB of storage, but no microSD card slot.

With the folding design, the front-facing camera is the main one and is 16Mp with an f/1.7 aperture and a Night Vision mode. It sits below the Quick View screen. Open up the Razr and there’s a 5Mp camera you can use.

A modern USB-C port and you’ll get a 15W TurboPower charger in the box. There’s no headphone jack here so USB-C headphones are included as well as an adapter.

There’s a battery on either side of the hinge combining for a total of 2510mAh so there’s a question mark over battery life here with most smartphones coming with at least 3000mAh.

Other specs include a fingerprint scanner below the larger screen, eSIM, NFC, Bluetooth and Wi-Fi. Oddly, the Razr doesn’t come with the latest Android 10 software, instead shipping with Android 9 Pie.