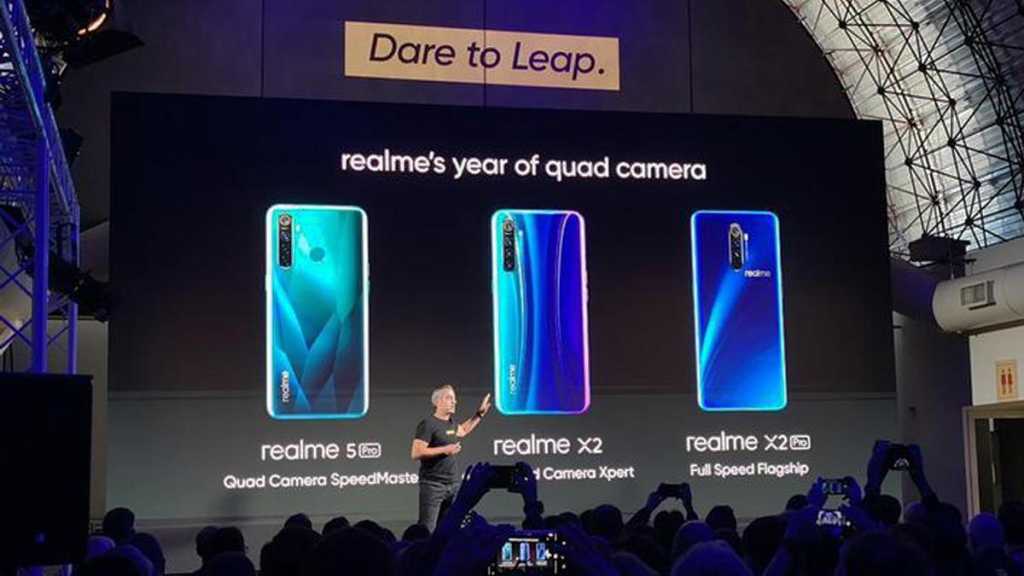 Realme has just pulled the wraps off three new smartphone models: the Realme 5 Pro, the Realme X2 and the Realme X2 Pro. Despite the Realme 3 Pro’s launch earlier this year, Tuesday’s event signals the company’s formal arrival in the European market, establishing its headquarters in Spain for its operations in the continent.

While the Realme 5 Pro and Realme X2 were already out in the open (save for their international pricing), the launch of the Realme X2 Pro model served both Europe and Asia simultaneously.

In this article, we are going to cover the highlights of each of these three models; all of which sport powerful hardware, modern design and high-quality details at affordable prices. Let’s not forget that Realme is the subsidiary of Chinese tech behemoth Oppo, after all.

Despite their presence in other markets, the Madrid launch finally granted us region-specific pricing for all three models unveiled today by Realme. The first of them, the Realme 5 Pro, comes to the market starting at €199 for the 4GB RAM/128GB storage variant.

There’s also a more potent model with 8GB RAM (and again 128GB of storage) for €249. Both SKUs will be available starting October 18 from Realme’s online store, as well as online retailers, including Amazon.

Again, depending on the market you plan on picking the phone up in, it’ll be available from Realme’s online store, as well as the likes of PC Components, AliExpress and Amazon.

Performance: What’s new about each model?

The Realme 5 Pro arrives on the market with a Snapdragon 712 processor, along with 4GB or 8GB of RAM and 128GB of internal storage. It features a 6.3in IPS LCD with Full HD+ resolution.

Like the other two models paraded on stage, a quad-camera system is the name of the game here; in addition to a physical fingerprint reader located in the rear.

For connectivity, there’s a USB-C port at its base, as well as a good-old-fashioned headphone jack. To ensure Realme’s promise of all-day use the 5 Pro also comes with a large 4035mAh battery and decently-snappy 20W VOOC 3.0 Flash Charge fast charging.

Based on the aggressive price/performance balance being struck with the 5 Pro here, it’s clear that Realme has set its sights on competing with the likes of the Redmi Note 8 Pro, the Samsung Galaxy M20 and the Lenovo Moto G7.

The emerging smartphone brand highlighted the X2’s use of premium components at a tighter price point than the competition.

The Realme X2 stands out for having a 6.4-inch Super AMOLED screen and a four-camera system, with the main sensor boasting a 64-megapixel resolution. The Snapdragon 730G processor with its 8 cores at 2.2GHz is accompanied by either 6GB or 8GB of RAM.

The screen features Corning Gorilla Glass 5 protection and, unlike the 5 Pro, the phone’s fingerprint sensor comes integrated under the display. Its rear features a curved 3D design and there’s speedier 30W VOOC 4.0 Flash Charge onboard.

There are a few key differences between the X2 and the X2 Pro, but some changes are more notable than others. Namely, this is Realme’s first device with a 90Hz refresh-rate display – joining the likes of the OnePlus 7 Pro and OnePlus 7T series.

The screen here is a 6.5in Super AMOLED panel with 402ppi. As far as the camera setup is concerned, it has the same main 64MP Isocell GW1 sensor as the standard X2, a 13MP wide-angle sensor, an 8MP telephoto snapper and a 2MP depth sensor.

There’s a flagship-class Qualcomm Snapdragon 855+ chipset at its heart, stereo speakers with Dolby Atmos support and rapid 50W SuperVOOC charging, which Realme says can refill the phone’s 4000mAh battery back up to full in just 35 minutes.

Here are the specs for each device, in case you want to dive deeper into what each of these phones possesses under the hood.