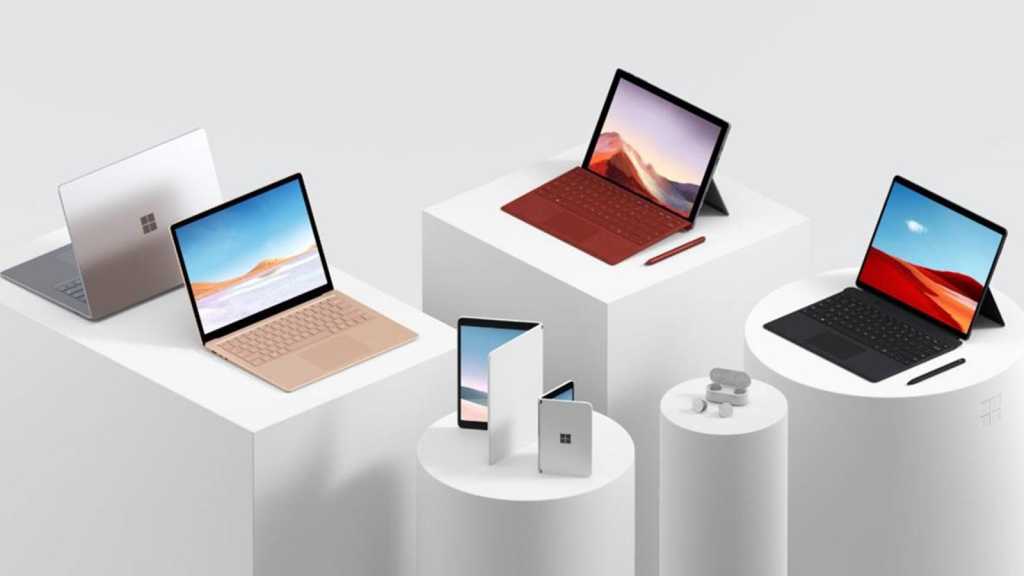 Microsoft held a Surface hardware event in New York on 2 October and unleashed a slew of new products, some familiar, some new, and one completely unexpected. Each product announced was a Surface-branded computer of some sort, but we did not expect the company to reveal what is essentially a Surface phone in the Surface Duo.

As well as that there were some more conventional Surface products announced and updated but it marks an important decision by Microsoft to not only press ahead and innovate with hardware form factors but to also release an Android tablet that is practically a phone – only two years after it officially declared Windows Mobile dead.

It’s notable that the company did not announce the Surface Book 3, perhaps a sign that it’ll quietly discontinue one of its computers to make way for this new line up.

Despite this, the event might end up being remembered for fully launching Microsoft back into the hardware game. Here’s everything it announced.

This is the long-awaited dual screen Surface device. Not on sale until 2020 and with no pricing yet, it is a folding tablet design but with a hinge, so the display itself doesn’t fold.

The Surface Neo runs Windows 10X, a new and unfinished version of Mircosoft’s famous software. The dual displays are 9in each and there’s a hardware keyboard add-on to go with the stylus.

The Surface Duo was a huge surprise from Microsoft, as it is practically the Surface Phone we never thought we’d see. Microsoft was careful not to call it a phone though, and the Duo is essentially a smaller Surface Neo – but it can make phone calls.

It’ll also run on Android with a new Microsoft skin over the top. Journalists have not been allowed to use the device, so the specifics of its operation are still uncertain, and it’ll also go on sale in 2020 along with the Neo.

Onto devices that are available soon, the Surface Laptop 3 updates the design of the first two generations by offering either the soft Alcantara fabric or a new aluminium finish. With the black screen bezels the Laptop 3 closer resembles the MacBook Air – a computer Microsoft claims the Laptop is five times faster than.

There are two screen sizes for the first time, 13.5in and 15in, both of which are touchscreens. Interestingly, the 13.5in uses Intel chips while the 15in is powered by AMD Ryzen.

Not as big a surprise as the Duo but still an unexpected announcement was the Surface Pro X, a sleeker 2-in-1 than the Surface Pro 7. It shrinks the bezels and exclusively uses ARM architecture and launches on 5 November from $999.

A 13in display on the tablet connects to a redesigned TypeCover with a section to store the new Surface Slim Pen. Like Apple’s latest iPad Pro and Pencil, the Slim Pen charges wirelessly. But the killer feature here could be the 4G LTE connectivity – hopefully it will have the battery life to be an all day, always connected device.

Microsoft kept it simple with its update to the longstanding Surface Pro. 7 replaces 6, and prices range from $749 up to $2299 depending on the specs you pick out. The necessary keyboard is optional still, frustratingly.

The biggest changes are 10th-gen Intel processors and, finally, a USB-C port on a Surface Pro for the first time.

Following on from its Surface Headphones Microsoft also unveiled the Surface Earbuds. Let’s get it out the way – they look really weird with circular protrusions. The design is to allow touch gestures for close integration with Microsoft Office, a feature you never knew you wanted from ear buds.

They will go on sale later this year for $249, but the best thing about them could be the 24-hour battery life you get with a fully charged charging case.