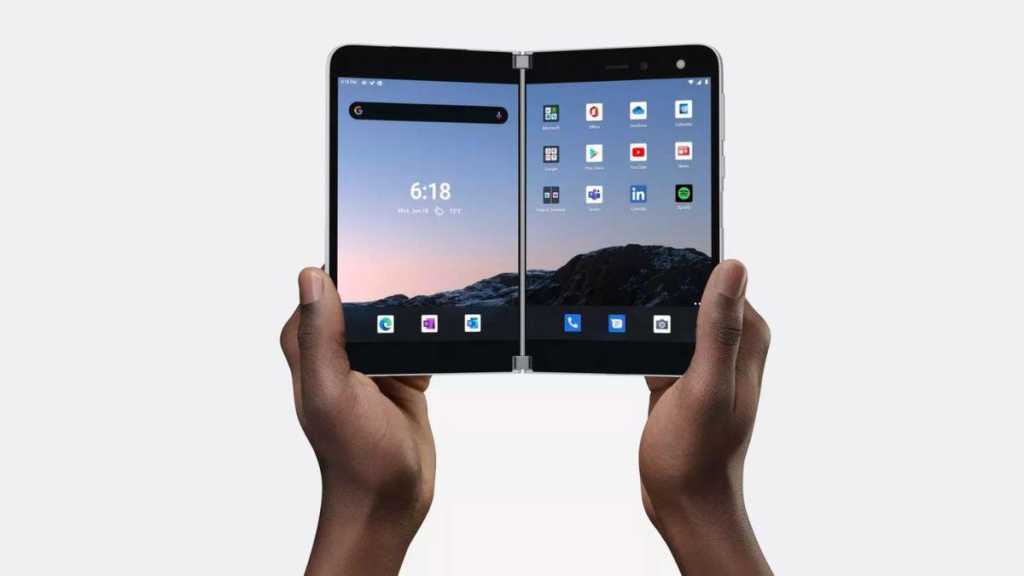 After months of teasing and a steady stream of leaks, the Surface Duo finally went on sale in the US in September 2020. We had to wait until February 2021 for the device to arrive in the UK, but it’s now available to buy in a total of 14 countries.

Microsoft’s very first Surface phone sports a radically different design to most handsets, with dual 5.6in screens that fold in on each other. It also runs Android, representing a big departure from Microsoft’s now-discontinued Windows Phone OS.

However, this was only Android 10 out of the box, despite Android 11 launching around the same time. It wasn’t until January 2022 that the Duo got the Android 11 update, months after Android 12 was released. This very patchy software support may have put lots of people off the Surface Duo – it remains to be seen whether the Duo 2 will fare any better.

When was the Surface Duo released?

The Surface Duo was initially unveiled at Microsoft’s hardware event in October 2019, alongside a ‘Holiday 2020’ release date. That was subsequently brought forward to 10 September 2020, although for five months it was exclusively available in the US.

An expanded release was made official on 18 February 2021, with customers in the UK, Canada, France and Germany all able to purchase the device. That was extended on 14 April 2021, with a further nine European countries selling the Surface Duo to business customers:

How much does the Surface Duo cost?

As has been the case with nearly all foldables so far, the Surface Duo doesn’t come cheap. Here’s a breakdown of the current pricing:

As you can see, the device is much more affordable in the US and Canada. To coincide with its expanded release, both models of the Duo dropped in price by US$400/CA$550.

See more information in our dedicated article on where to buy the Surface Duo.

Alongside the official announcement of the Surface Duo’s price and release date, a number of rumoured specs were confirmed.

These include those leaked back in May by Windows Central‘s Zac Bowden:

Other key specs are as follows:

The use of a chipset from 2018 may come as a surprise to some, but the 865 requires a separate 5G chip and was unveiled after the Duo was first announced. It may also have allowed Microsoft to keep costs down slightly.

However, as Windows Latest is reporting, the latest Geekbench 5 benchmarks suggest the Duo is a solid performer.

On the software side, the Duo runs Android 10 out of the box. A free upgrade to Android 11 only began rolling out in January 2022 for users in Europe and North America, a full 16 months after the device first became available. As Microsoft’s support page explains, customers on the AT&T network will be waiting even longer.

After Android 11 arrives on all devices, it looks like Microsoft will shift its attention to getting the Duo (and Duo 2, presumably) updated to Android 12L. The Android 12 spin-off is expected to arrive at some point in 2022, bringing features specifically designed with tablets and foldables in mind.

As Windows Latest first reported, there are plenty of apps that come pre-installed on the Surface Duo. As an Android phone, the 35 apps include 20 from Google and 15 from Microsoft.

App compatibility on the Duo has been a topic of discussion ever since the device was announced, and Windows Central has now published a list of the apps that are optimised to run across the dual-screen design:

TikTok has also now been updated to natively support the Duo, as was confirmed in a Windows blog post. It’s unclear when other social media apps might be updated.

Moving forward, it might be easier for developers to optimise their apps to work on the device. As Windows Central reports, Microsoft recently updated the Surface Duo emulator to include new samples and tools for quickly adapting their apps to work across both screens. This move should make developers more willing to optimise software to run on a device with a relatively small percentage of the market.

Sticking with software, Microsoft has confirmed to Android Authority that the Surface Duo will receive three years of Android updates. This should take it right up to the release of Android 14, and is similar to commitments made by Google and Samsung in recent months.

Microsoft will be hoping the design of the Surface Duo means it’s able to overcome problems more efficiently. As Windows Central reports, the device will come with a custom UEFI (formerly BIOS) that allows the company to respond directly to any software-related threats. However, this additional layer of security may also mean it takes Android patches longer to be approved for the Duo.

If you’d like to see the Duo in action for yourself, Microsoft has published a 35-minute deep-dive video, featuring Chief Product Officer Panos Panay. This was initially only available to select members of the press, before being released publicly on 13 August 2020.

We discussed the Surface Duo in episode 28 of Fast Charge, Tech Advisor’s weekly phone show. Discussion of the Duo starts at 22 minutes in:

The Surface Duo shipped with Android 10, but an update to Android 11 is still in the pipeline. Back in June, Windows Central gave us our first look at how stock apps will run on the Duo. Pictured below is Outlook:

All Microsoft’s apps will be built to work across both screens, often using one side as an overview and the other to dive into something specific.

Via an emulator build of the Surface Duo’s software, Windows Central has also gave an in-depth look at how multiple functions on the device will work. The video confirmed what was long suspected – on the Surface Duo there is the option to choose between traditional on-screen buttons or gestures for navigation.

However, all these demos are shown using Microsoft’s apps. We don’t know how many third-party developers are updating their apps to take advantage of both screens, or whether they’ll be ready in time for the Surface Duo’s release.

In addition to having full Surface Pen support, Windows Latest unearthed some exciting functionality for creatives. Via an API known as ‘ Hinge Angle Sensor‘, developers will now be able to build functionality into their apps to allow a smooth transition when the Surface Duo unfolds.

The same article also hints at Microsoft working on gesture support for the Duo. Among those mooted is a double-tap of the pen to take a screenshot. The above video also confirms what the same article suggested, with the option to choose between

Below is the information we found out when the Surface Duo was unveiled in October 2019:

The Duo is essentially a smaller version of the Surface Neo. They’re both dual-screen folding devices, but the Duo is a smartphone running Android.

It has a pair of 5.6in 1800×1350 OLED displays separated by a 360-degree hinge, so this isn’t a single folding screen like the Galaxy Fold. On the back is Gorilla Glass and the design means you can bend it into different forms like a convertible 2-in-1 laptop.

You may also be interested in our coverage of the Duo 2, its successor. On the site, you’ll find both a full review of the Surface Duo 2 and a guide to the best Surface Duo 2 deals.