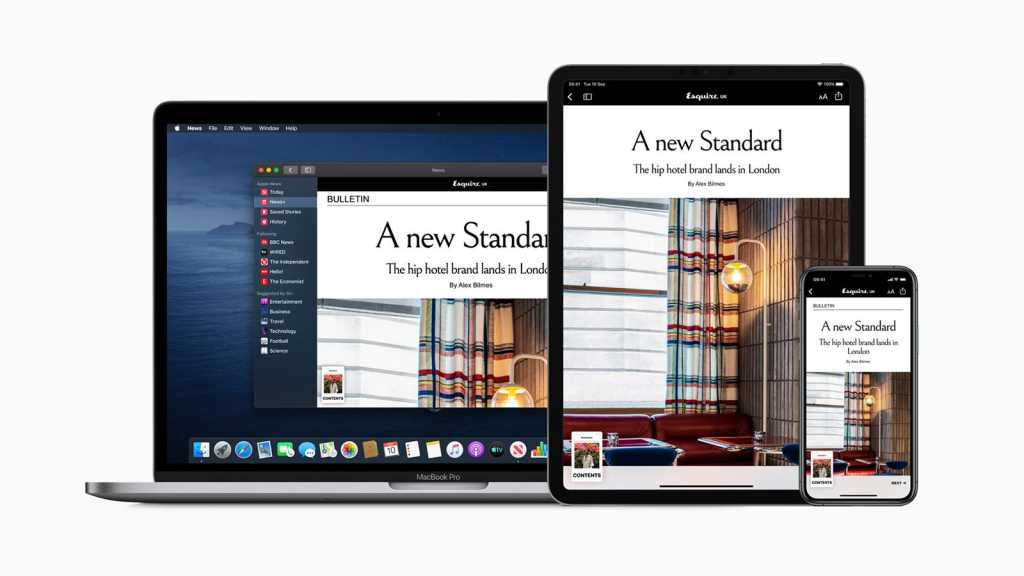 Apple News Plus, Apple’s paid version of its curated News app, is now available for UK customers. The service, which has been available in the US since March, offers unlimited access to content from over 150 magazines and newspapers for £9.99 per month.

Apple News has been a free app since iOS 9 in 2015 but has often been a difficult user experience with an unintuitive UI making it hard for people to find relevant content, with not many major subscriber-based publications offering their content for free.

With News Plus this is still the case, with titles like The New York Times and The Telegraph nowhere to be seen. But it does include The Washington Post, The Times, Empire, Esquire, Bloomberg Businessweek and Rolling Stone on its roster to entice you into paying Apple a tenner a month to access a breadth of content rather than pay for several different subscriptions.

A subscription works across iPhone, iPad and Mac, with Apple pushing its interactive magazine formats on the iPad’s similar-to-print layouts and attractive animations.

“Apple News+ offers hundreds of the world’s most popular publications, all discoverable through personalised and curated recommendations,” said Lauren Kern, editor-in-chief of Apple News. “The quality of the journalism, the beautiful photography, the stunning live covers and custom-designed articles in this collection are second to none. We think readers in the UK will be delighted with the offering, and we are proud to support the work of our newest publisher partners.”

There is a definite preference for magazine content in the marketing of Apple News Plus, and you’re able to access whole issues. This is down to the fact Apple has been unable to sign up the majority of UK and US newspapers. This is likely strategic on the newspapers’ part, as Apple News posts articles without advertising and also takes a large cut of the revenue from subscriptions. Publications signed up to Apple News are doing so to get their content read, because they won’t be making a lot of money from it.

This makes the ‘News’ moniker misleading. The app shines when it comes to magazines, but the actual variety and abundance of newspapers is low. If you want to access a lot of high-end magazines for the monthly cost of one or two print magazines, then it’s worth it. Otherwise, you should probably seek your news fix elsewhere.