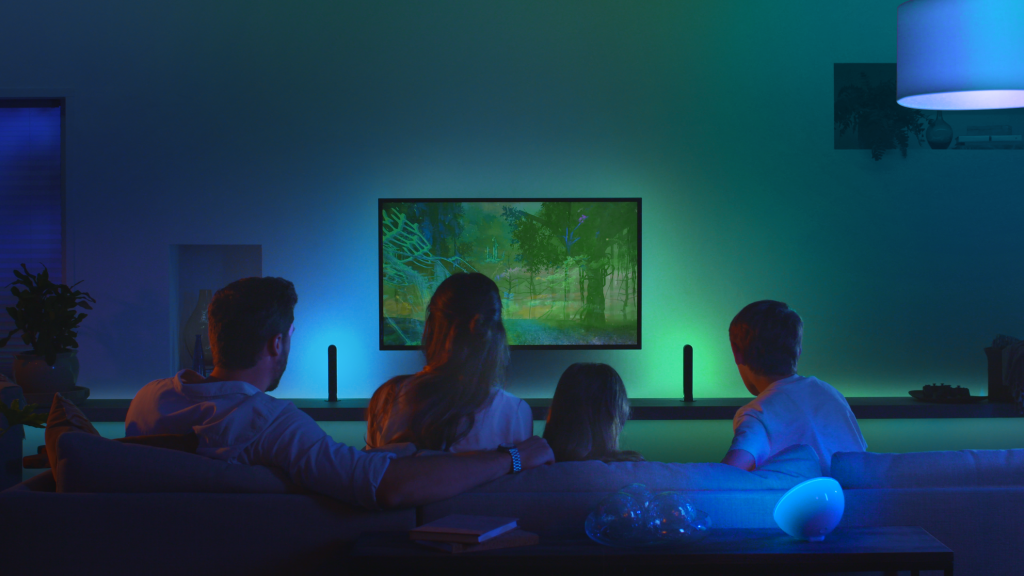 Signify, the company behind the popular Philips Hue range, has revealed a new product that connects your TV to your Hue-powered smart lighting system for a more immersive, cinema-like viewing experience. It’s called Philips Hue Play, it acts as the middle-man between your TV and your various HDMI-enabled devices, and it’s due out in the UK in January 2020.

The Philips Hue Play Sync Box offers four HDMI inputs and in a basic sense acts like a HDMI splitter, but there’s much more to it than that.

The Philips Hue Sync Box is smart enough to be able to analyse every frame of video that passes through to your TV, decode the most prominent colours and then send that information to the various Hue lights you’ve got dotted around the room to create an immersive lighting setup that’s synced perfectly with what’s on-screen.

We went eyes-on at an event in London and it’s nothing short of a transformative experience when watching movies, and that immersive experience translates well to games too, with near-instant lighting effects.

The lighting is dynamic and can either intelligently adjust brightness and colour, or if you want, you can go into the app for iOS and Android and access granular lighting controls that can limit different aspects of the system.

It’s something that PC owners have had for quite some time via the Hue Sync app, but it’s the first time that Hue owners will be able to access the functionality.

The HDMI splitter feature of the box is smarter than most of the competition too; as well as being able to intelligently switch input based on what’s being used at that moment, you can also switch HDMI input manually via the smartphone app. It’s capable of analysing up to 4K@60fps footage, but offers passthrough capabilities for higher refresh rates or resolutions – perfect for 144Hz gaming.

The Philips Hue Sync Box is due out in the US and select countries in Europe on 15 October 2019, and will set consumers back $229.99 or €249.95 respectively. As mentioned above, Philips Hue fans in the UK will have to wait until January 2020 to get their hands on the Hue Play box, and while UK pricing isn’t official just yet, we imagine it’ll be close to the European pricing thanks to the weakness of GBP right now.

However much it costs, the Philips Hue Play is the perfect upgrade for those that want an unrivalled level of immersive lighting when watching movies and playing games.