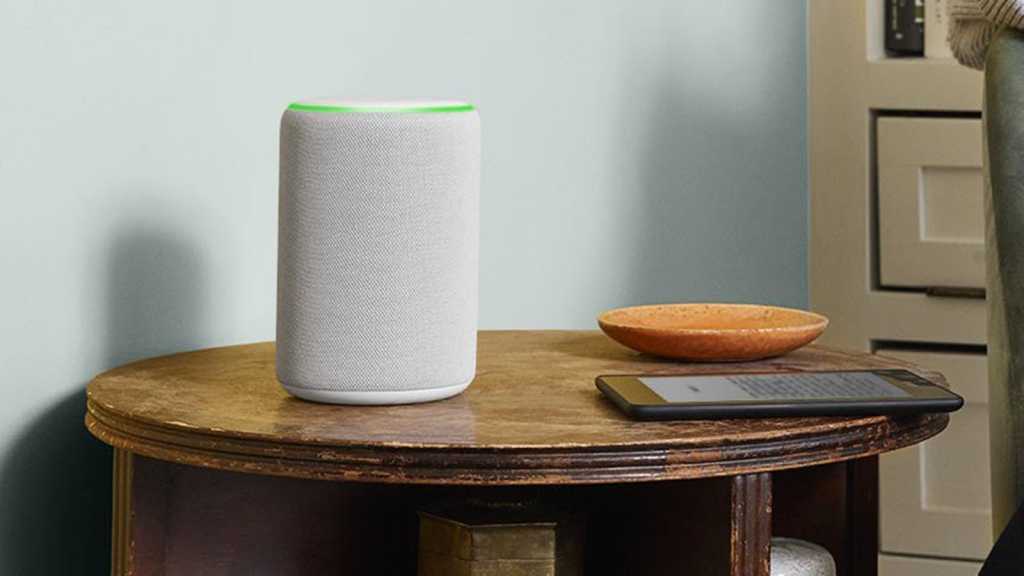 Amazon has just finished presenting its regular autumn hardware event in Seattle and it released a lot of stuff, even by its own standards. No fewer than fifteen new hardware products were announced by the tech giant, many of which are Echo branded Alexa smart assistant things.

There are also Ring and Eero products, the doorbell and Wi-Fi companies that Amazon acquired but kept the branding of, and some new product categories for Amazon. Just when you think it couldn’t make anything else, it has popped up with some pretty out-there stuff, and it’s redefining what first party hardware a tech company can turn out.

Then again money is no object for Amazon and Jeff Bezos. Some of the new Amazon hardware is invite only as part of its new ‘Day 1 Editions’ scheme, and some is only coming to the US. Either way, the relentless pace that it is forging ahead and updating its product line is startling.

Priced the same £89.99/$99.99 as the previous generation Echo, Amazon says its Echo flagship smart speaker (above image) has better sound to go along with its updated design.

The Echo Flex is Amazon’s attempt to put Alexa into a smart plug rather than buying an Echo Dot, for example. It means you can put voice command capabilities in other parts of your house to control smart home devices. It even has a tiny speaker if you need to ask it something, but you will absolutely not want to ply music through it. 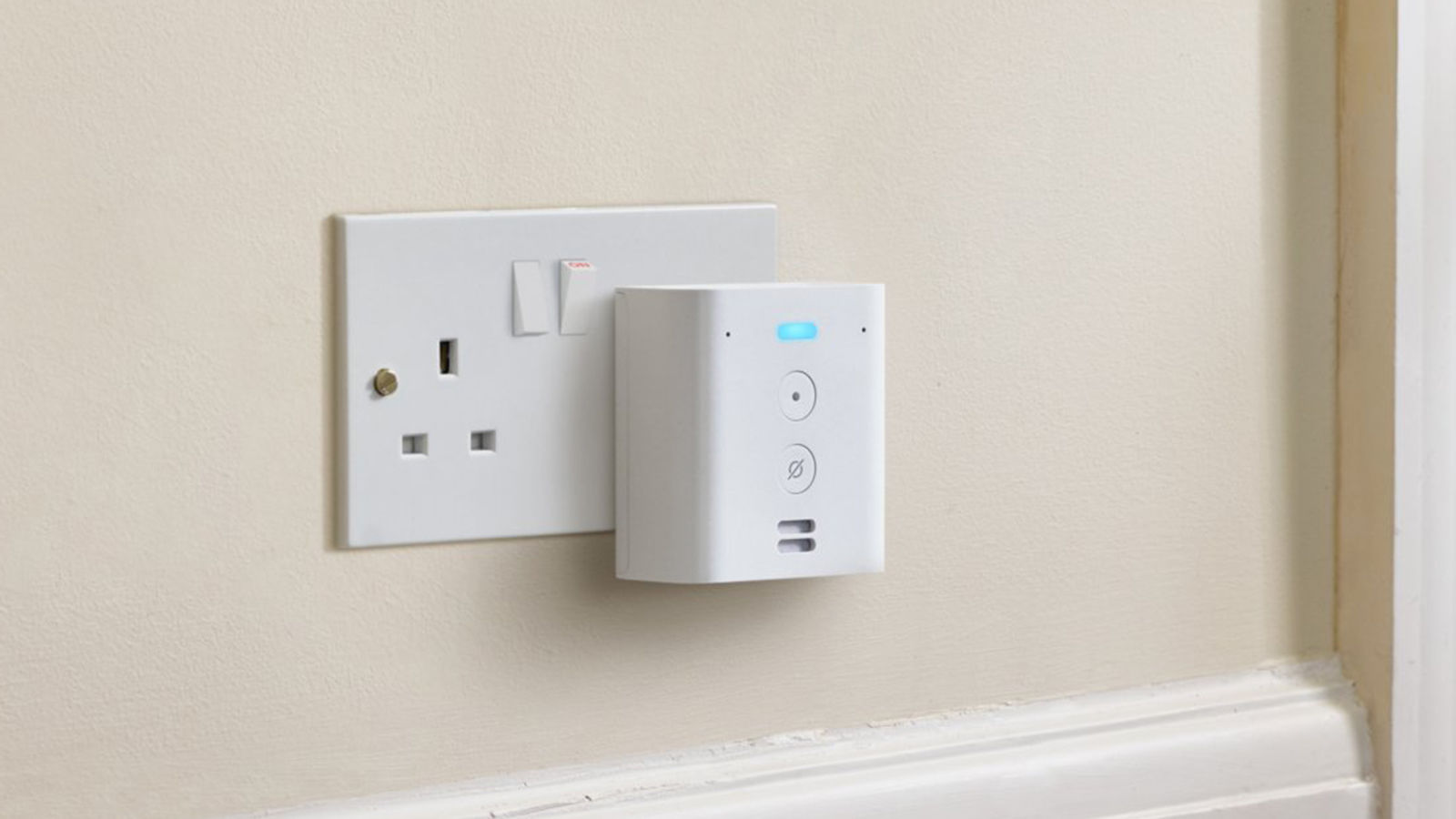 For an extra £10/$10 the Echo Dot now has an LED clock on the side to lure you into putting an Amazon microphone right next to where you sleep to use as an alarm clock, if you hadn’t already. 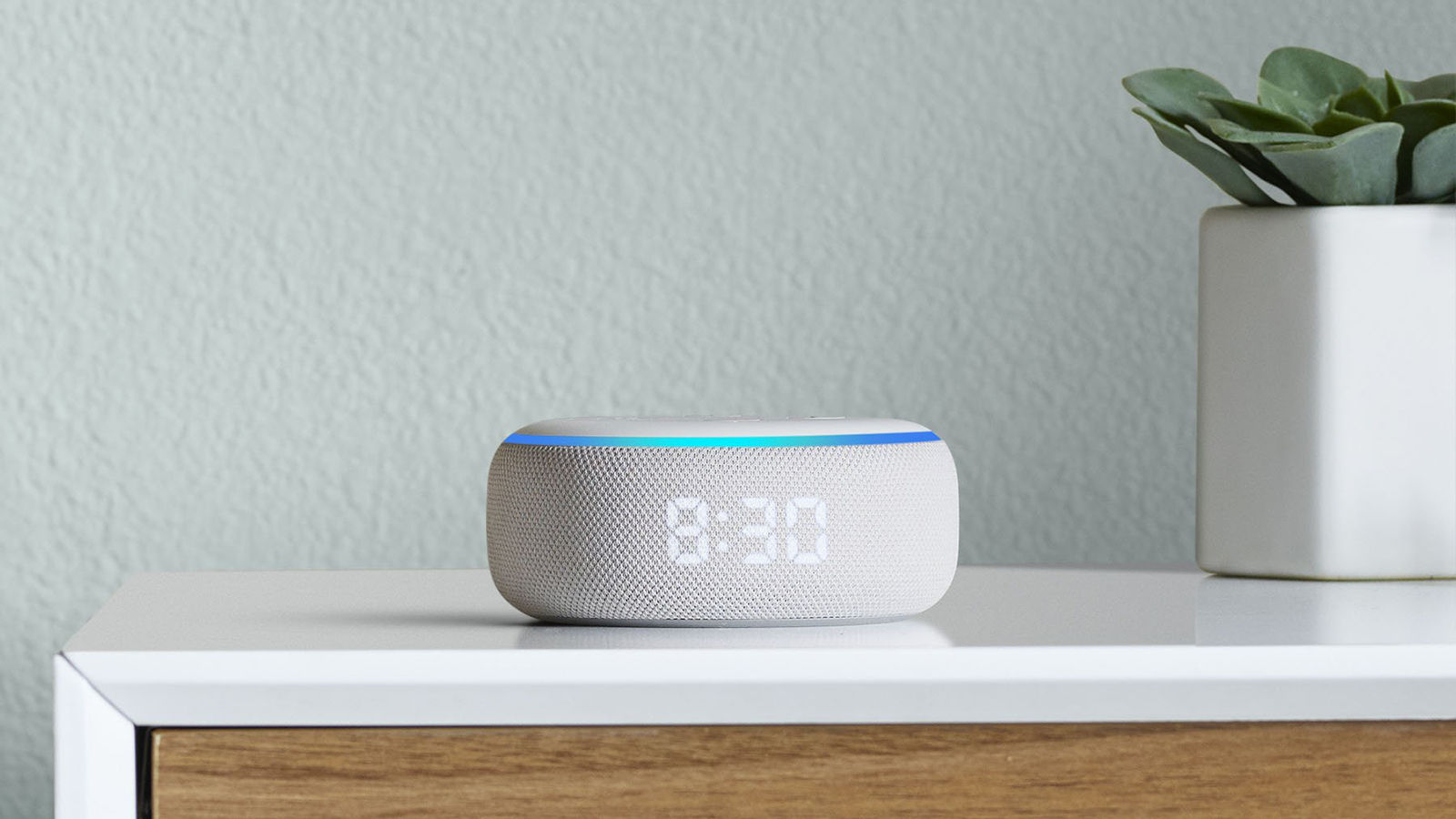 Amazon is pushing into competing with Sonos with the Echo Studio, a smart speaker with higher quality audio than the regular Echo. As well as stream music, it’ll pair to Fire TV devices to also upgrade your TV audio, which isn’t bad for the asking price of £189.99/$199.99 –cheaper than many soundbars.

Amazon will hope you decide to get one and pay for its Amazon Music HD lossless streaming service. 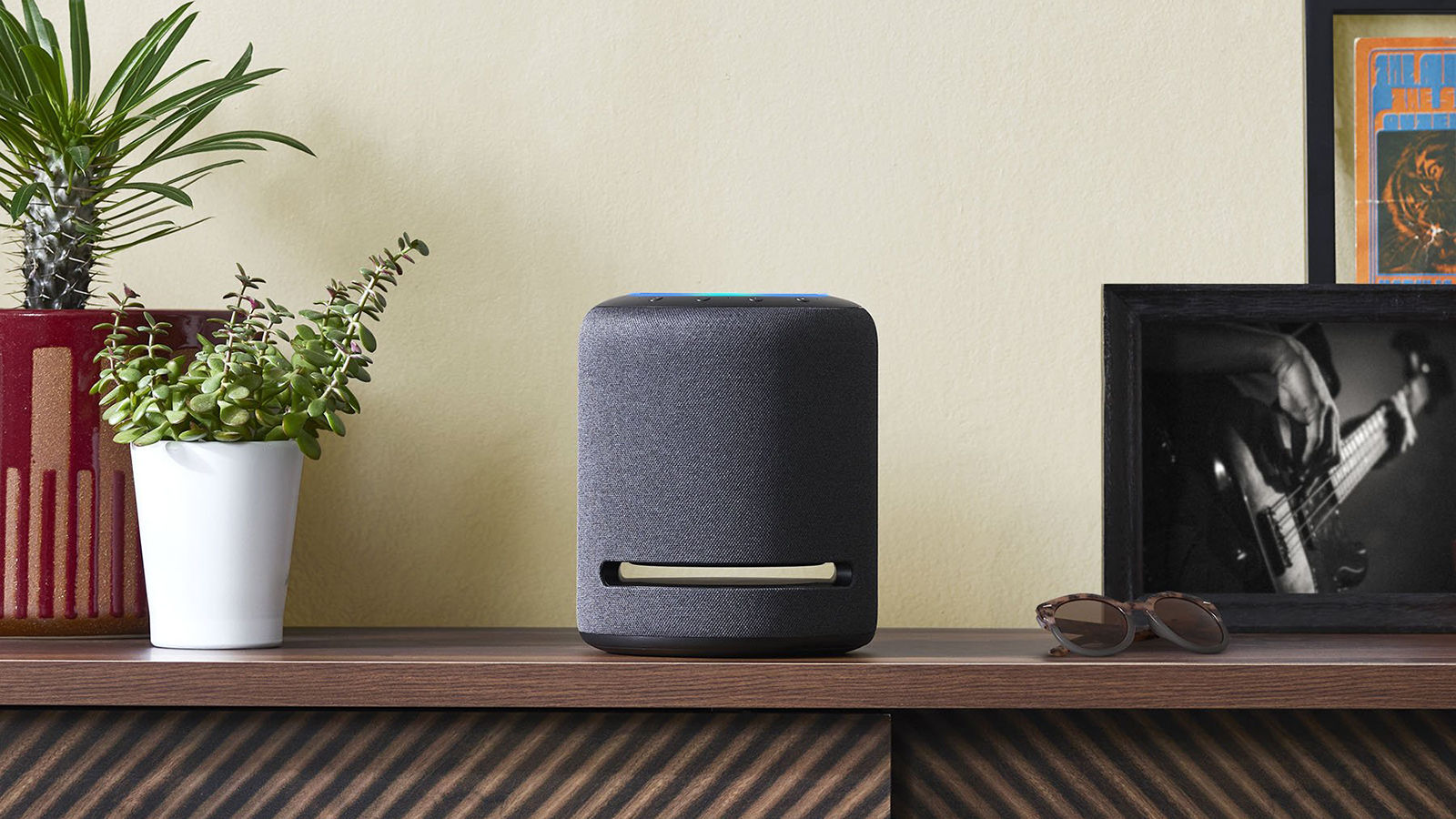 It was only a matter of time before Amazon decided to rival Apple AirPods, Samsung Galaxy Buds and every other wireless earbud on the block. The Echo Buds Amazon branded but have Bose powered noise reduction, which is not quite noise cancellation but it’s close and similar to what’s found on the J abra Elite 65t.

For £119.99/$129.99 they undercut some rivals and don’t even force you to always use Alexa – you can command Siri or Google Assistant from your phone too. But Alexa is there to give you quick access to weather, your calendar and more. But the case looks quite large and unfortunately charges over micro-USB. 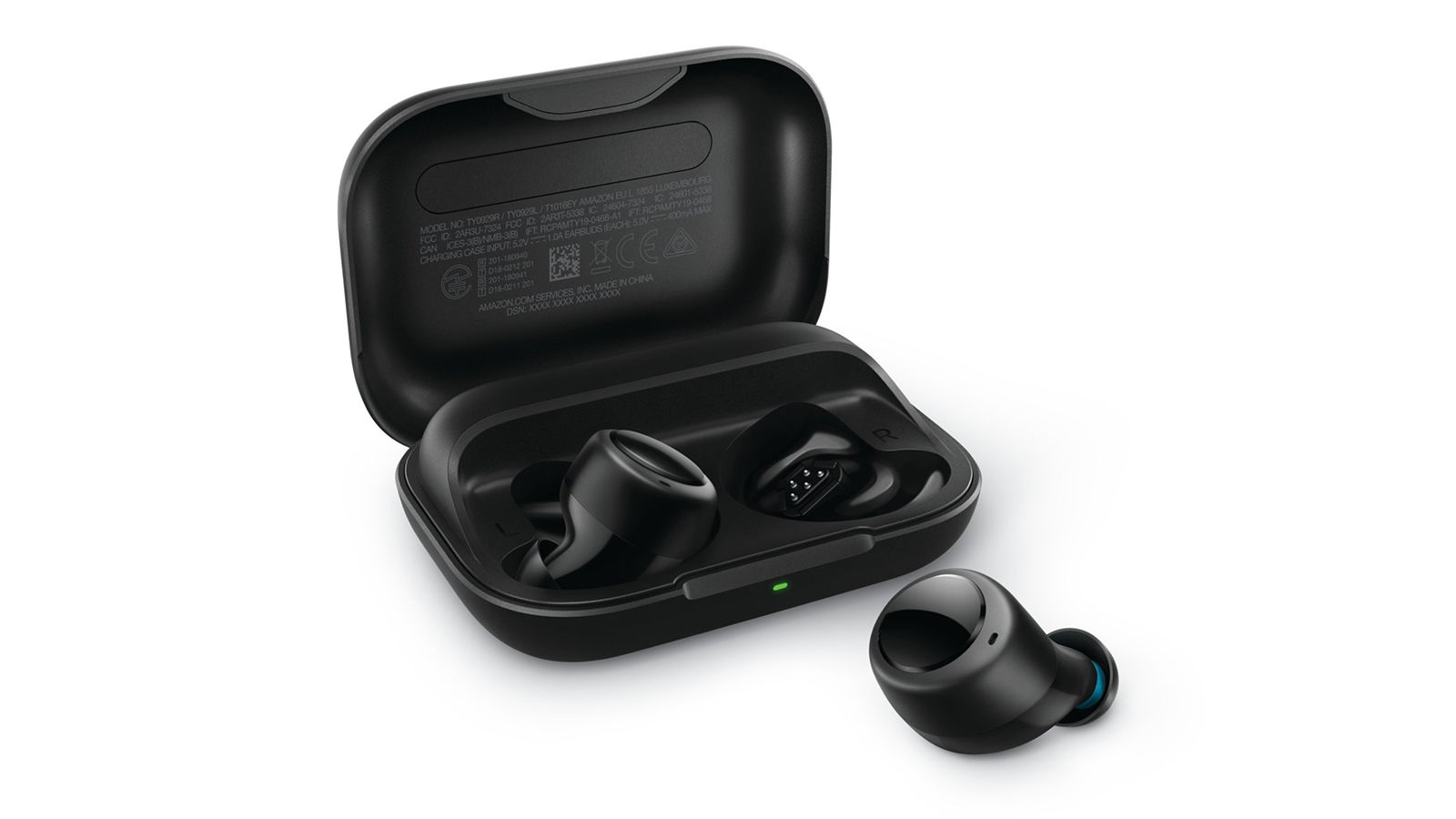 A US only Day 1 Editions product, the Echo Frames are a pair of smart glasses. They cost $179.99 through an invite system and will be $249.99 after that if they go on general sale. They’re fairly subtle but the thick arms of the glasses are the giveaway.

Inside are microphones and speakers that let you ask Alexa things that are played back to you – hopefully quietly enough so no one else can hear. It’s worth mentioning that they are only compatible with Android phones.

The other invite only product announced is this smart ring. It’s the weirdest one because it’s not something anyone really needs. The US only $129.99 price goes up to $179.99 after a short period and it’s an expensive way for you to talk to your hand via Alexa.

It comes in small, medium, large and extra large depending on your digits but the battery only lasts a day according to Amazon. It vibrates for notifications and has a mic for the Alexa functions. There’s a tiny speaker in there too, so you can listen back to requests.

This is an attempt at a subtler smartwatch with no screen.

This is not the eighth Echo Show but an Echo Show with an 8in display to sit with the 5in and 10in models. It’s a video calling device with Alexa that can also play video, music and give information such as the weather.

The £119.99/$129.99 Echo Show 8 doesn’t have any new features save for the introduction of FreeTime, a child-focused mode that lets kids watch appropriate videos and video call pre-selected contacts. 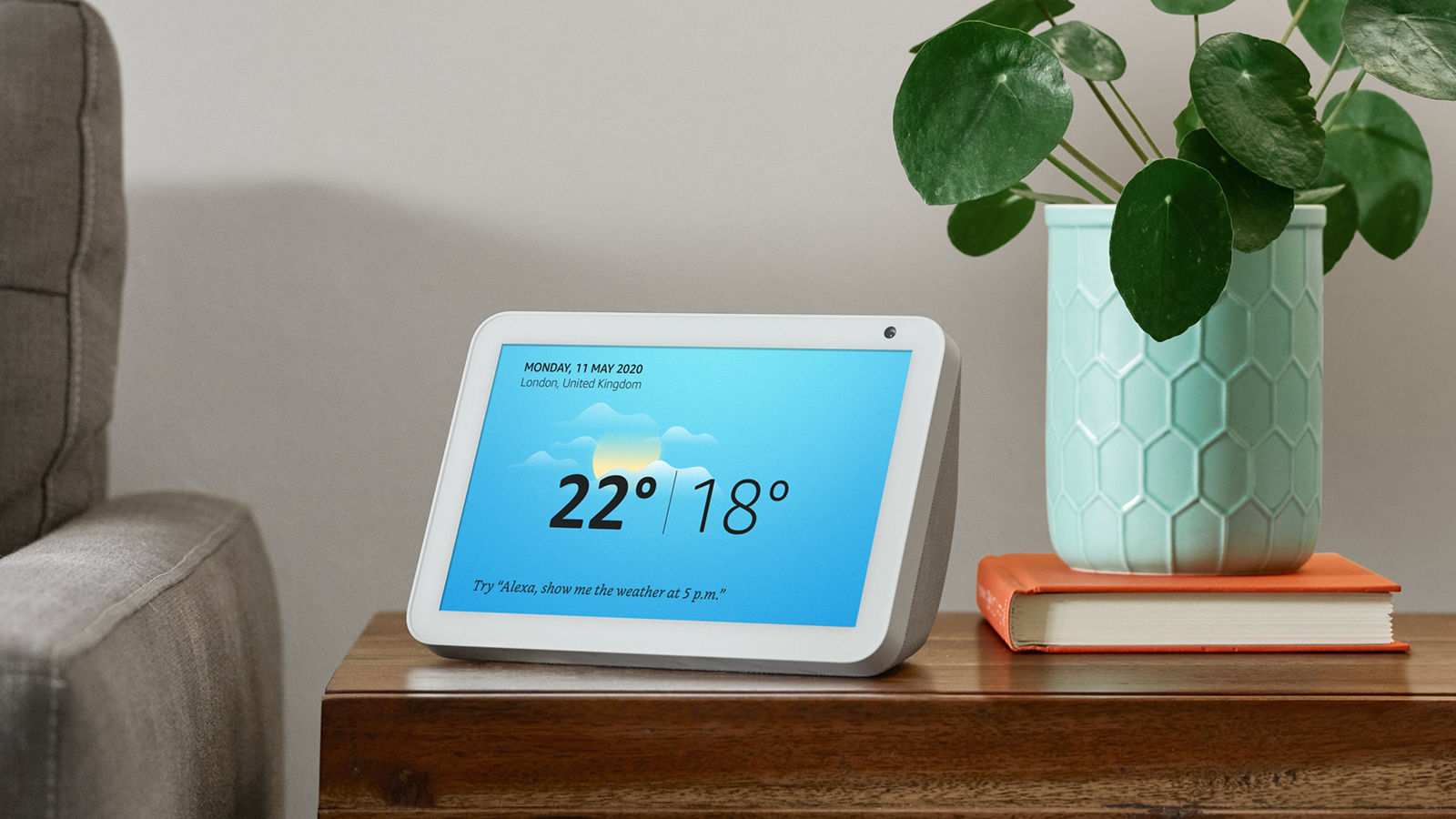 The cheapest new device at $29.99 is a US only smart light for children. It requires an Alexa device to control it and acts as a night light that can flicker like a fire or put on a dance mode. It’s mercifully simple and a nice take on the classic night light.

The very reasonably priced $99 Ring Stick Up Cam is easy to stick up, as it happens. It’s indoor or outdoor and comes in three versions: battery (£89), wire powered (£89) or solar powered (£129). It can record in 1080p HD and has motion detection. 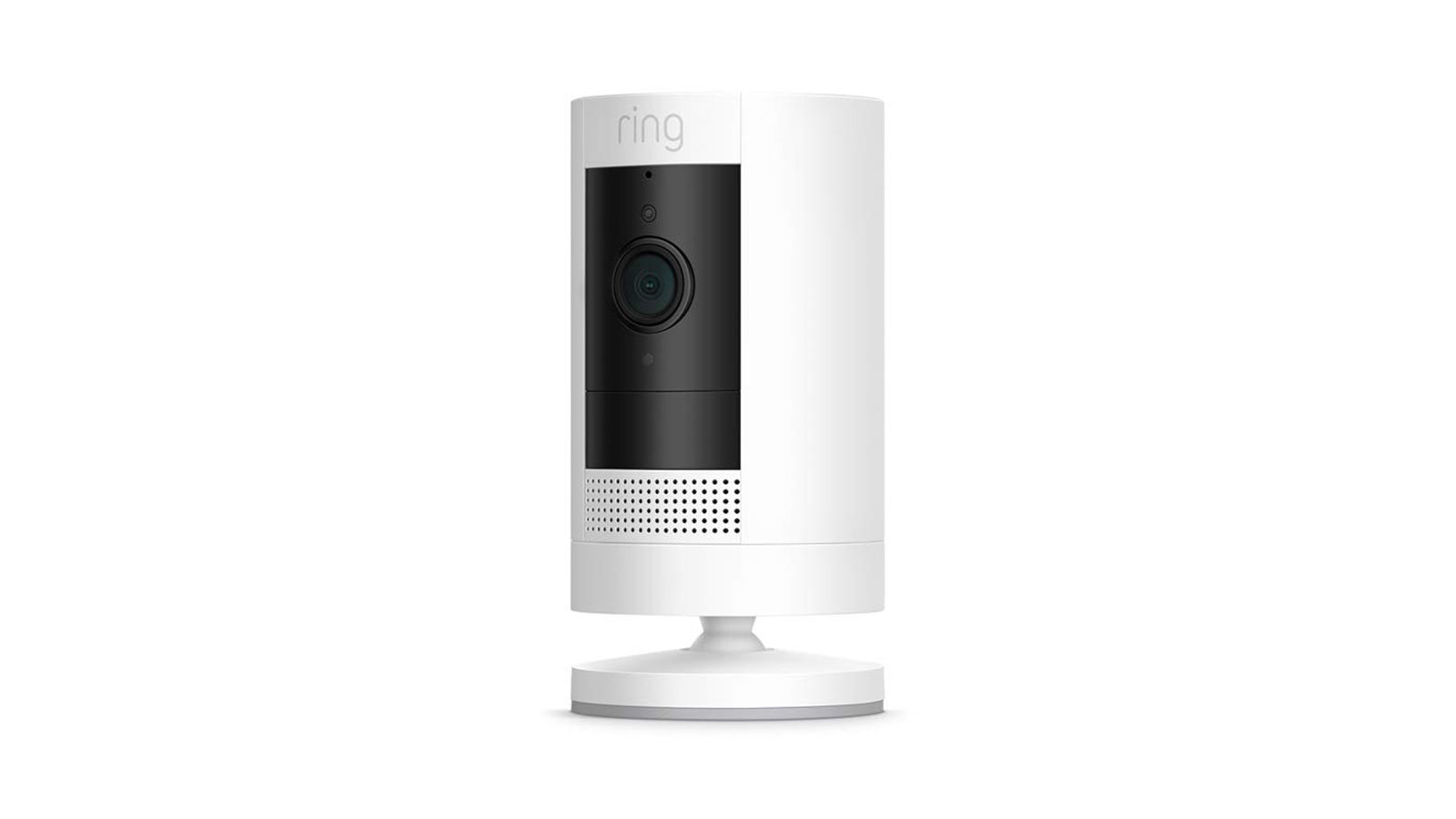 Ring Indoor Cam – does what it says on the tin. It’s only £49/$60 and has motion detection and night vision. You can turn these features off from the app, so it’ll be useful to use when on holiday for example to alert you to any unwanted home activity.

A smart tag for your dog, Ring Fetch clips onto your pooch’s collar and will track them if they leave your designated catchment area. Handy to track wayward hounds, though a price is to be announced.

This could be useful if you have an alarm system that you don’t want to change, but modernise. It lets you connect existing alarms into a Ring set up. It’ll cost $199 for the basic Alarm kit or $379 with a bundle of hardware.

Because you need an Amazon branded microwave convention oven. It can also act as a fryer and can, naturally, be controlled via Alexa devices. It is basically a microwave but can double up as an oven which could be handy for smaller homes or your pool house. It’s on US pre-order at $249.99.

Finally, the Amazon-owned Wi-Fi company Eero popped up to show its Amazon Eero Wi-Fi router. Available in the for £99/$100 or £249/$250 for a three-pack, it claims to bring faster multi-router Wi-FI to your home.