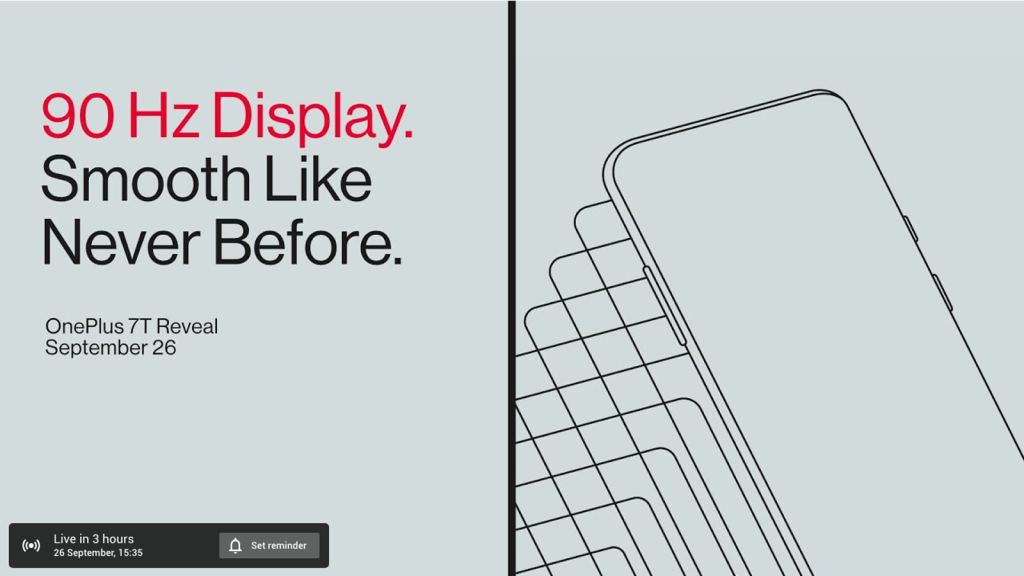 This live stream is solely for the OnePlus 7T. If you are also interested in the OnePlus TV that the company will additionally announce in India today then you should instead tune into the New Delhi stream at 2.30pm BST (9.30am EDT/7pm IST). Both will be live-streamed in English.

Here’s all you need to know about the OnePlus 7T launch, from timings to live stream details and a summary of what has been teased so far.

When is the OnePlus 7T launch taking place?

The OnePlus 7T launch is actually taking place in New Delhi, but we understand the company will spend the first hour talking about OnePlus TV before moving on to the phone. Since the TV is initially available only in India, there are two live streams: one in India, which starts at 2.30pm here in the UK (7pm IST), and the other in North America, which starts at 3.30pm BST (10.30am EDT).

The stream below is the North America stream. Click here to watch the New Delhi stream. Local times are as follows:

What will OnePlus announce at the event?

At this stage, it’s no secret that OnePlus will be officially showcasing the heavily teased OnePlus 7T at today’s event. The design has already been showcased by the company’s CEO, Pete Lau, and it teases more than a simple spec-bump.

The render seems to showcase a new matte-frosted glass design and, more notably, an upgraded triple-camera system in a large circular housing.

Renders aside, the company has also confirmed that the OnePlus 7T will feature the same speedy 90Hz refresh rate of the OnePlus 7 Pro, and that it’ll feature 30W fast charging tech that will apparently provide 50 percent charge in 30 minutes. Oh, and it has also confirmed that it’ll ship with Android 10 out of the box. Is there anything else left to announce at this point?