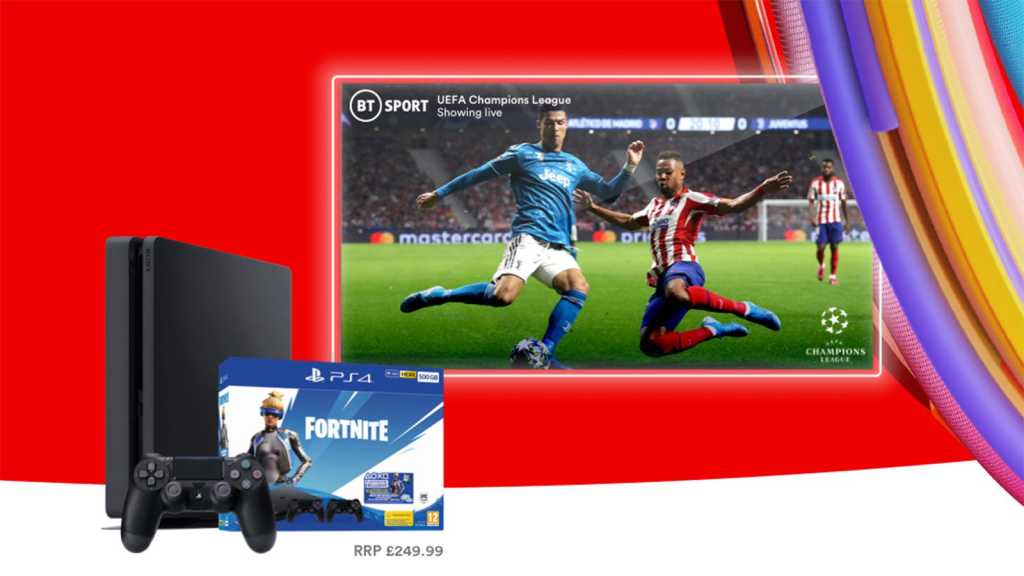 Virgin, no stranger to big-value bundles, is back with a Fortnite PS4 console and one-year PS Plus membership offer, worth £249 – this time on its broadband and TV plans. Rates start at £57 a month with a £35 set up fee for 108Mbps broadband speeds and over 230 channels, including BT Sport in 4K .

The last time we saw Virgin offer a similar bundle was on its Sony Xperia 10 contract plan. You can  head to Virgin now to see all its qualifying deals, but we’ll be going through each plan type in more detail below.

If you’re looking for faster broadband, Virgin remains a top choice as the provider of the fastest speeds in the UK. While the quickest speeds will cost more, there are cheaper options to choose from (all plans include a £35 set up fee):

Bigger Bundle: Includes Maxit TV with over 230 channels (with BT Sport in 4K), select Sky channels and 108Mbps broadband speeds. This option costs £57 per month for a year for 12 months then £78 per month.

Bigger Bundle + Sports: This is the same as the Bigger Bundle, but also includes Sky Sports HD and over 240 channels. This costs £72 per month for 12 months then £110 a month.

If you prefer a higher speed and mobile SIM options in the bundle, there are also the Bigger Oomph bundles which you’ll find on a separate tab beside the ‘Regular Bundle’ tab on Virgin’s site:

Bigger Oomph: This is the same as the Bigger Bundle option above but includes a faster 213Mbps broadband speed and a 2GB data SIM plan.

Bigger Oomph + Sports: This is identical to the Bigger Oomph plan, but includes Sky Sports HD and 240 channels.

Ultimate Oomph Bundle: The costliest of the bunch, this plan includes the premium channels Sky Sports HD, Sky Cinema HD, Kids Pick, an extra V6 set top box and a whopping 516Mbps broadband speed. You also get a SIM with unlimited data and minutes. This deal costs £99 per month for 12 months then £139 a month.

The PS4 bundle includes a 500GB Jet Black console, two Dualshock 4 controllers, a copy of Fortnite, a 12-month PS Plus subscription and a PlayStation Store voucher that will allow you to download add-ons like 2,000 V-Bucks.

You should receive the PS4 bundle after 28 days of installation. Customers can also choose a £150 credit instead.

Head to Virgin to see its PS4 bundle deals. You can also see our round up of the best broadband deals in our dedicated article.