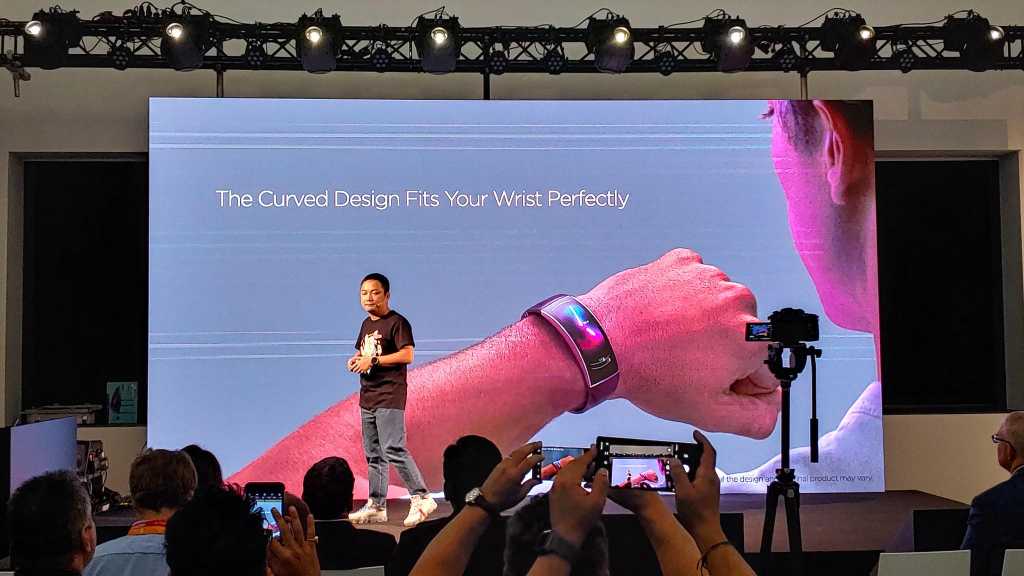 At IFA 2019 Huami unveiled the Amazfit X: a curved watch that wraps around your wrist.

The Amazfit X is billed as a concept watch, but that won’t stop Huami releasing it, with plans for the curved display to hit stores in the first half of 2020 – though there was no word on price, or any confirmation that the device will release outside of Europe.

Huami – a smartwatch giant that makes products within the Xiaomi family – revealed the Amazfit X at its IFA press conference, claiming that it takes 40 days to build each of the curved displays.

With 6% more screen area than the 40mm Apple Watch 4 – in a much slimmer panel – the Amazfit X has a pixel density of 326ppi and an impressive 430 nits max brightness. There are no visible buttons on the metal body, but instead there are pressure-sensitive points hidden away to avoid disrupting the design.

The 220mAh lithium battery had to be built in a curved shape itself to fit within the slim body and should offer seven days’ charge, and even the motherboard has been built in three pieces to accommodate the unusual design.

The Amazfit X isn’t the first curved smartwatch we’ve seen – that honour belongs to the Nubia Alpha – but the Huami watch looks significantly slimmer, lighter, and all-round prettier than Nubia’s clunky first attempt. Still, as a concept product the design specifics are liable to change before it ever hits the market.

Alongside the foldable tease, Huami confirmed that its recently-announced Amazfit GTS and Amazfit Stratos 3 and Stratos 3+ are all coming to Europe soon. The GTS is a joins the Amazfit GTR (one of the best smartwatches around right now) and sports an Apple Watch-esque design, AMOLED display, heart-rate sensor and GPS – along with a battery that should last for two weeks on normal use, but despite all that it will only set you back €129.

Meanwhile the Stratos 3 and Stratos 3+ are fitness-focussed sports watches that can deliver 70 hours of continuous GPS use – or six days normal use, and 15 days on an ultra-endurance battery mode. The Stratos 3 will cost €199, while the 3+ (which upgrades from steel to titanium for the body, and Gorilla Glass to crystal for the face) is a little more at €229.