A whitepaper by analyst firm Counterpoint Research has highlighted HMD Global’s impressive feat of getting its Nokia phones updated to or shipped with Android Pie – at the time of writing, the latest available version of Google’s mobile OS.

Languishing near the bottom of the pile was LG on a dismal 16%, while Oppo sat at a surprisingly low 34%.

While Nokia’s 96% is very good, it is a report that only covers a year, from July 2018 to June 2019. It will not include phones released any earlier, phones that some customers might have hoped would include a Pie update. 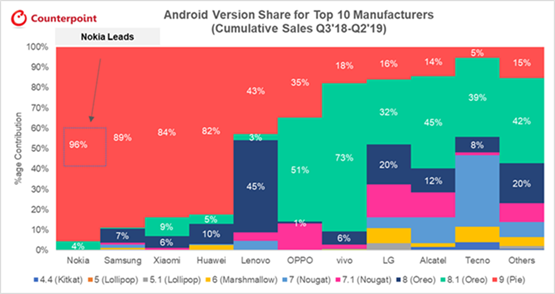 Nevertheless, for Nokia to be ahead of Samsung is notable. Samsung can often be surprisingly slow despite its marketing budget in pushing out the latest version of Android as its One UI skin is so heavy. It’s to HMD’s advantage that all Nokia phones run either a very plain version of Android or Android One, the easily updatable version of the operating system.

While these figures don’t guarantee that a Nokia phone will ever get an OS update, it shows that the company is at least shipping a number of its phones with up to date software and will offer updates to many handsets for at least one additional Android version.

We’ve broken down the best Nokia phones you can buy here.