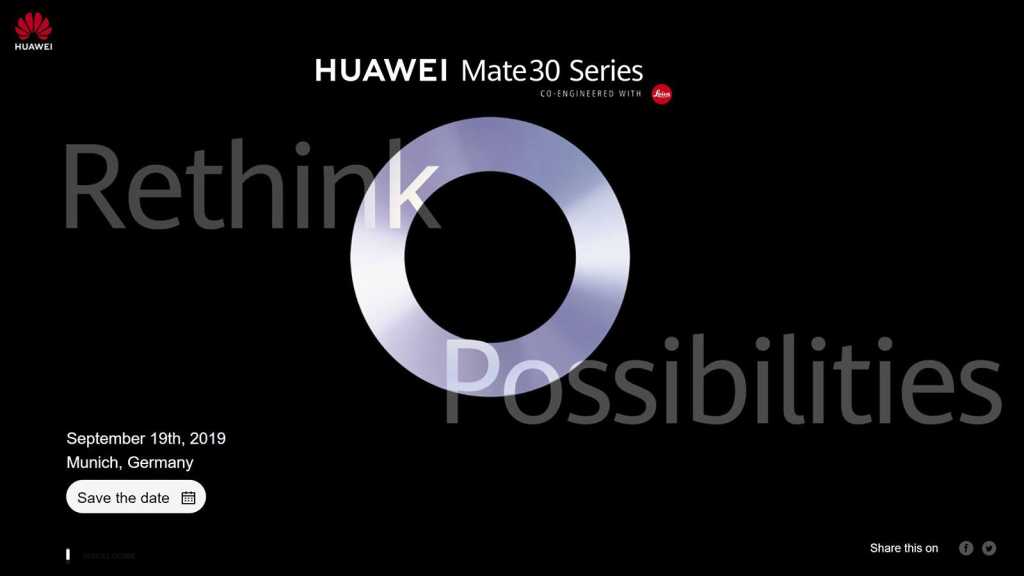 Huawei has officially confirmed that it will unveil its Mate 30 series of phones in Munich on 19 September. The launch will go ahead despite uncertainty as to whether the phones will be able to ship in the west with Google apps and services.

The ongoing US trade ban on the company means it cannot trade with US companies such as Google. The Mate 30 phones are the first to be affected by the ban, with Huawei not yet commenting on the situation.

This aside, the phones should be great, and we expect a Mate 30 Lite, Mate 30 and Mate 30 Pro with a mix of features and prices. The rumour of a circular camera module is pretty much confirmed in the below tweet with the “going full circle” reference.

Did you get it right? The countdown to #HuaweiMate30 starts now! We’re going full circle in Munich on 19.09.2019. Join us live: https://t.co/9ugi5gG9ci #RethinkPossibilities pic.twitter.com/etRYjrBVEC

Huawei’s release pattern is to bring out a Mate series roughly six months after its P series. Last year the Mate 20 Pro added a new camera set up, in screen fingerprint sensor and wireless charging over the P20 Pro.

The P30 Pro is an astonishingly good phone but the last that will definitely have Google support. It will be difficult for the Mate 30 Pro and its siblings to succeed outside of China if they cannot run Google apps and services.

It remains to be seen if it’d be possible to sideload the Play Store onto the Mate 30 but this fragmented, botched experience is not one for the mainstream. No one except enthusiasts should buy a phone with these compromises.

Tune in on 19 September to find out what the situation is with the Mate 30.