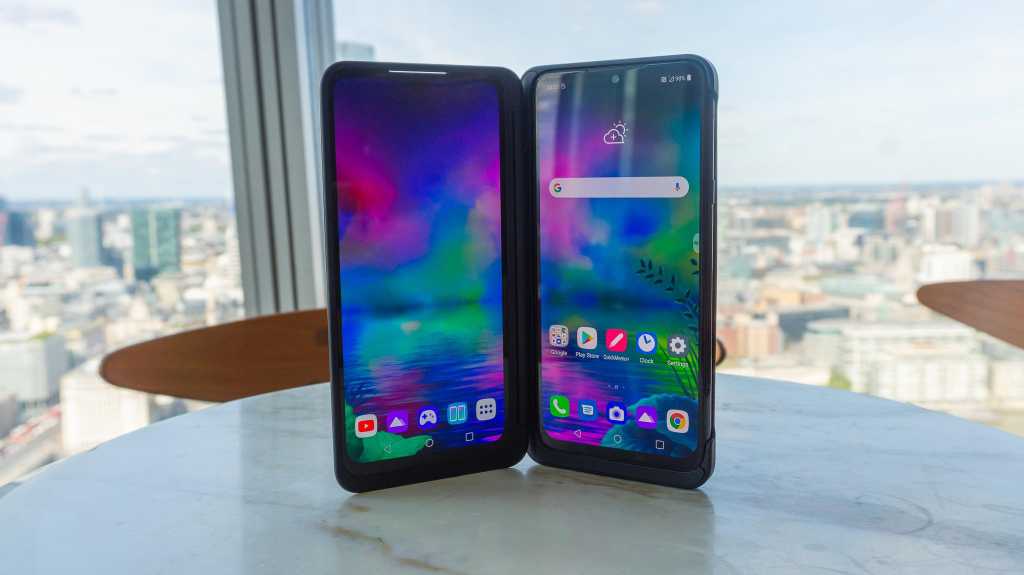 LG has announced the G8X ThinQ, a new flagship phone that sees the return of the Dual Screen concept the company introduced with the V50 ThinQ earlier this year.

Unveiling the G8X ThinQ at the IFA trade show in Berlin, LG claimed that the Dual Screen is the phone market’s only proven new form factor – a not-so-subtle dig at the faltering foldables from Samsung and Huawei – while revealing that the new model boasts a few design upgrades over the iteration seen alongside the 5G V50 handset – read our preview to find out what we think of the changes so far.

For one, the second screen has grown to 6.4in – up from 6.2 last time around – but more importantly the new 360-degree Freestop Hinge will let it rest at any angle, rather than locking into set positions, which should make it friendlier for watching content on one screen while browsing on the other, or for using the lower display as a game pad in compatible games.

Correcting the other pain point of the first model is an itty bitty 2.1in OLED display built into the outside of the Dual Screen to display the time, date, and notifications while the case is closed.

As for the phone itself, there’s a matching 6.4in FHD+ OLED panel featuring an in-display fingerprint sensor. The Snapdragon 855, 6GB of RAM, and 128GB storage round out the core specs, while a 4,000mAh battery should help compensate for the Dual Screen’s extra battery drain, and IP68 water and dust-resistance together with the MIL-STD-810G drop-testing standard mean it should be a sturdy little thing.

Unlike the regular G8 this has only a single selfie cam – though it’s 32Mp – which means there’s no time-of-flight camera and thus no support for the rather iffy Air Motion controls or Hand ID which that phone featured.

LG is also using the to launch LG UX 9.0 – the latest version of its proprietary Android skin – which fattens up the fonts and introduces a dark mode and one-handed operation options alongside a host of other minor tweaks.

There’s no release date or pricing on the G8X ThinQ yet, but expect it to come close to a grand – even without the Dual Screen add-on. A US release is likely, but the UK is less certain – while the V50 hit British shores the regular G8 never did, and this could well be the same.