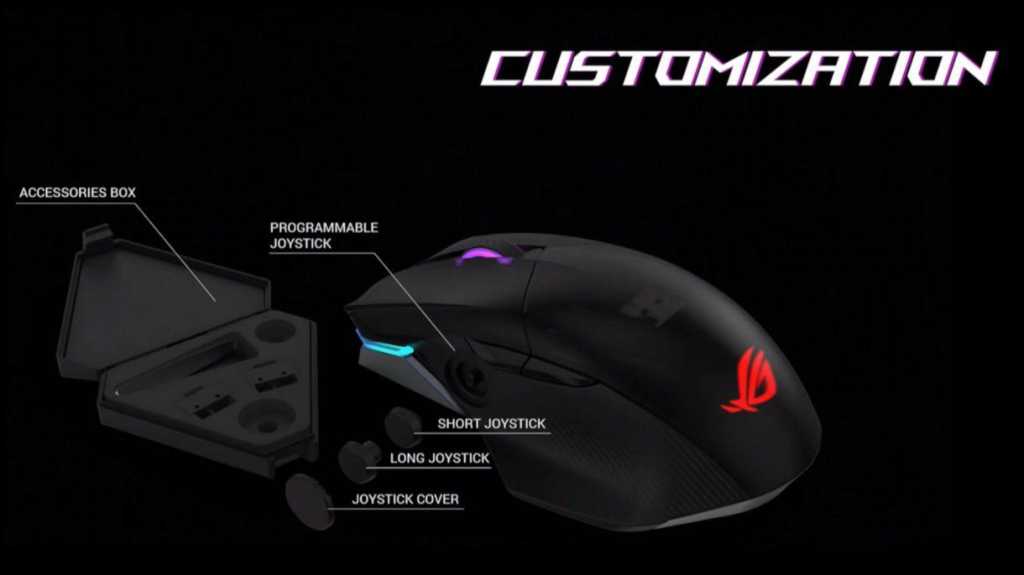 Asus Republic of Gamers (ROG) announced a lot of new products at its Gamescom press conference but one that caught our eye is the Chakram mouse. It packs in a lot of the baseline features you’d expect from a gaming mouse but adds a clever programmable joystick (well, it’s a thumbstick really) for even more granular control.

Asus also announced the ROG Strix Go 2.4 wireless headset that it claims is the first USB-C wireless gaming headset for the Nintendo Switch. You can rewatch the whole press conference here on YouTube.

At the time of writing the release date and price for the Chakram were unavailable.

It’s crazy what gaming companies are squeezing out of the humble mouse these days in order to give players better control over, in this case, sandbox games like PUBG, first person shooters and flying sims. The removable thumbstick has four movements, each programmable for specific in-game functions and will work analog or digitally.

In the ROG presentation it was mentioned that the thumbstick will come in two sizes that vary in length.

The Chakram has a 16,000 dpi, 400 IPS sensor that clicks along at 1000Hz, meaning it’s pinging its movement every millisecond. It works wired or wireless (2.4GHz Wi-Fi or Bluetooth) and in an uncommon move is also Qi charging compatible. Plug it in with a the fast wired charger though and you’ll get 12 hours play from 15 minutes of juice.

Its design is not unusual in classic gamer black with a few LED trims, but the detachable magnetic covers to suit hand size and grip preference seal the deal for us – this should be one hell of a gaming mouse, offering unprecedented customisation not only per player but per game for those players.