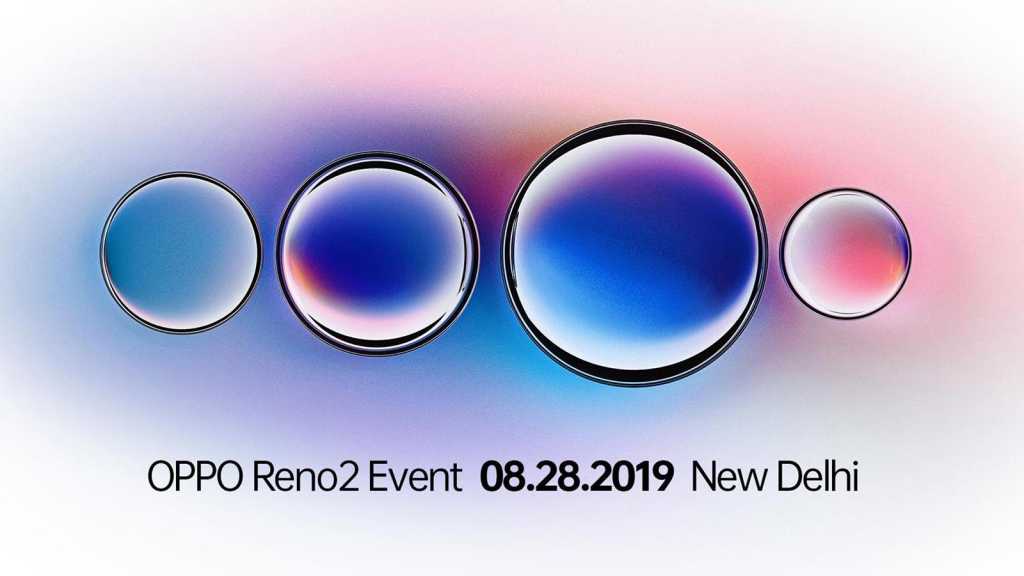 Oppo has confirmed that it will launch the Oppo Reno 2 series of phones in India on 28 August. A surprise announcement, it follows on from the very recent June launch of the Oppo Reno, Reno 5G and Reno 10x Zoom phones.

The company will bring the phones to the Indian market first as it will also do with its sub-brand of Realme phones this month. The Twitter post confirms one of the Reno 2 phones will have quad cameras, 20x zoom and the shark fin selfie camera of the previous Reno series.

The four camera sensors look to be different sizes, which will give the Reno 2 a standout look with their central position and the shark fin up top – the latter a sign that the display will again be near bezel-less without a notch or cut-out.

New details straight from the horse’s mouth reveal that the Reno 2 will feature the Snapdragon 730G gaming chipset, which offers a 15% improvement over the standard 730 chip with a ramped up clock speed. It integrates anti-cheat extensions, reduced in-game stutter via a “Jank Reducer”, a Wi-Fi latency manager and HDR gaming support. Oppo’s own Frame and Touch Boost technologies will also be included.

The Snapdragon 730G is paired with 8GB of RAM and 256GB storage, and we expect to see the pop-up selfie camera make an appearance given that Oppo is claiming a 6.55in OLED display with a 93.1% screen-to-body ratio. An in-display fingerprint sensor will also feature, along side a 4,000mAh battery and VOOC 3.0 fast charging.

The industry has become used to a manufacturer releasing more than one flagship phone per year, from OnePlus’ six-month upgrade cycle to Samsung’s Galaxy S and Note lines rotating releases half yearly.

A report suggests that the Reno 2 series won’t be flagship level though, with a Reno 2, Reno 2Z and Reno 2F making up a second tier of more affordable smartphones. This makes sense given the proximity to the first Reno launch.

If true, it makes more sense that Oppo would announce the Reno 2 just two months after the original Reno went on sale. But it still shows the relentless forward march of smartphone technology and the ambition of the company making the strides.

Oppo is huge in its home country of China but only officially launched its phones recently in the UK and Europe. While the rapidly developing Indian smartphone market will get the Reno 2 series first, we suspect it’ll make its way into all of Oppo’s sales territories before the end of the year.