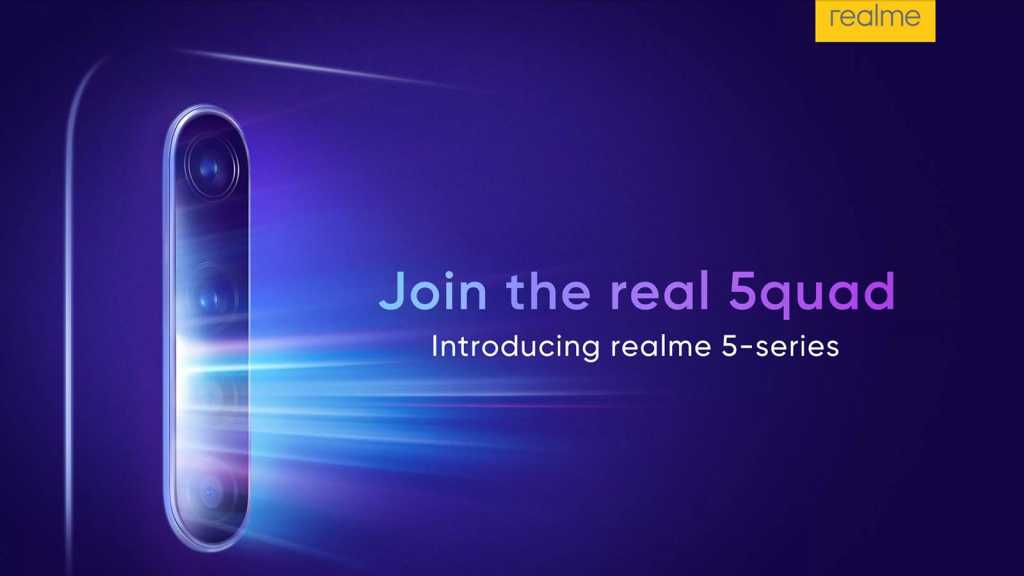 Realme, Oppo’s cheaper sub-brand of smartphones, is to launch the Realme 5 and 5 Pro on 20 August in India. The Indian market is currently amidst a tech phase where a large portion of the population don’t have broadband and instead rely on smartphones for their sole method of internet access.

This is one of the reasons why the Indian smartphone market is so competitive at the moment. It’s now confirmed by Realme CEO that the Realme 5 will be the first quad-camera smartphone in India under INR10,000, which at the time of writing is £115.

Realme tweeted a promo video for the phones’ launch which gives you a huge look at the design of the Realme 5:

Expand your perspective and see it all with the Ultra Wide Angle lens on #realme5series. Get ready to #JoinTheReal5quad and watch the launch live at 12:30 PM, 20th August. #LeapToQuadCamera Know more: https://t.co/IczXkhy4lB pic.twitter.com/VhsbMTnxIy

Further to this he added in a tweet that the Realme 5 Pro would become the India’s first 48Mp quad-camera smartphone. This 48Mp sensor was confirmed in another of the CEO’s tweets to be the popular Sony IMX586 used in such phones as the Honor View 20. It suggests another of the cameras will be a 119 degree wide angle lens:

#LeapToQuadCamera! 4+48+586+119 RT and tag 4 friends to make your #Quad5quad to guess what these numbers mean and win big! Stay tuned as we launch #realme5series live at 12:30 PM, 20th August! pic.twitter.com/LEISsFeNJB

GSMArena further confirmed the regular Realme 5 will have the Snapdragon 665 processor with 4GB RAM after it was spotted on the benchmark app Geekbench. It’ll run Android 9 Pie with Oppo’s latest ColorOS 6 skin over the top.

We recently reviewed the  Realme 3 Pro and were left very impressed, so you can bet the Realme 5 and 5 Pro will be excellent value for money. Hopefully they see a worldwide release.

Read next: Realme XT is official