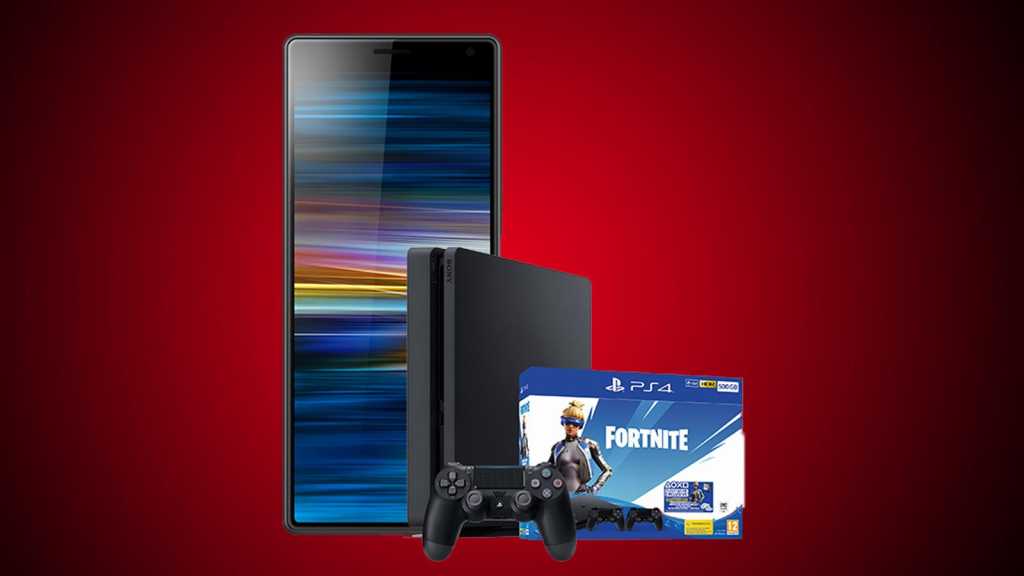 It’s an excellent season for bundle deals. BT’s giving away an Xbox One S (digital edition) or a Samsung Galaxy Tab A, worth up to £249.99, with its BT Sport and broadband deals, and Vodafone is pairing an Echo Plus worth £139.99 with its own broadband offers.

Now Virgin is throwing in a free 500GB Fortnite Neo Versa PS4 console with the Sony Xperia 10 for £24 per month. This offer gets you 100GB of data per month, and additionally, two Dualshock 4 controllers, and a 12-month PlayStation Plus subscription, worth £49.99.

If that doesn’t convince you, there aren’t any upfront costs either. Head over to Virgin now to pick up this unbelievable offer. The promotion lasts as long as supplies remain in stock.

In top of the PlayStation Plus membership, customers get a voucher code that allows downloads of Fortnite content, like the Epic Neo Versa Outfit, the Epic Neo Phrenzy Back Ring and 2,000 V-Bucks. You can see the full details of the offer over at Virgin.

The 100GB data plan, which includes 5000 minutes and unlimited texts, costs £24 per month – reduced from £39 per month. This rate would usually get you 50GB of data, so you effectively get double the data at roughly two-thirds of the original cost. The plans last for 36-months – but you can opt for a 24-month term if you prefer, though this raises the monthly cost, where the 100GB plan rises to £31 per month.

There are cheaper monthly plans as well, which start at £20 per month for 1GB of data over a 36-month term, or £29 per month over a 24-month term. Head to Virgin to see all qualifying plans.

The Sony Xperia 10 is a mid-range phone that typically retails at £299 from retailers like Carphone Warehouse and Argos. The phone may be on the cheaper side, but it did not boast an incredible performance in our review compared to similar mid-range phones.

Its greatest strengths are in its tall but bright 21:9 display and wired audio features, which allow you to adjust the audio output for higher quality listening. The Xperia 10’s battery also performed well, though it’s quite small at 2870mAh. We would recommend the Xperia 10 if you intend to mostly stream films on a low-cost device.

Despite its shortcomings, it’s hard to deny the strength of Virgin’s deal. The PS4 bundle along with the PS+ subscription amounts to a £300 saving. Head over to Virgin now to get the free PS4 Fortnite bundle now.