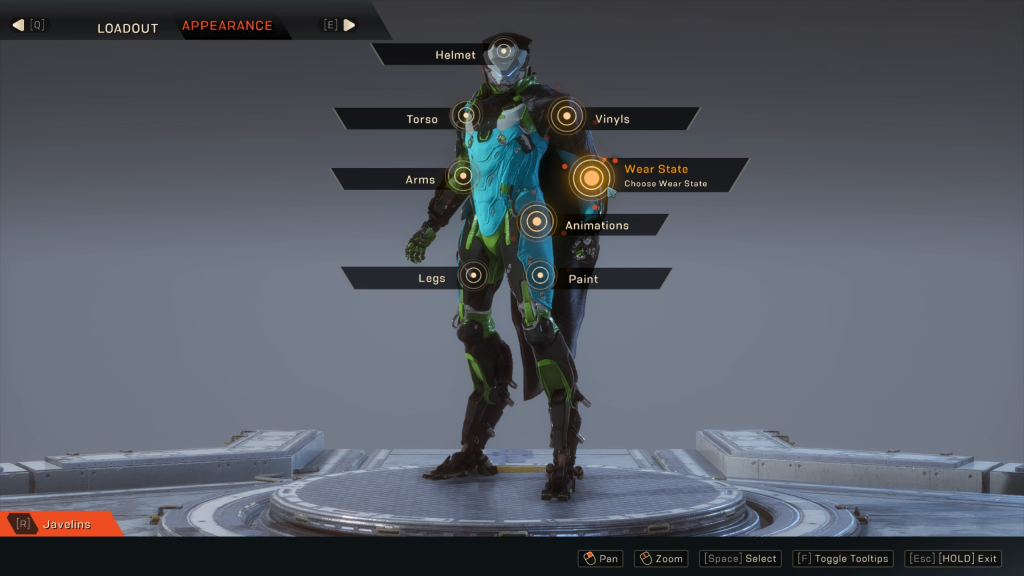 When you first get started in Anthem, you might assume that you’ll be given a shiny, new Javelin exosuit to blast your way through the game. While you do get your very own Javelin (it wouldn’t be a very good game if you didn’t!) it’s old and dirty, and it’s not initially clear how you can clean up your Javelin and make it look as epic as it does in your imagination.

That’s where we at Tech Advisor come in; we’ve been playing a lot of Anthem, and we’ve figured out how to clean your javelin and get new wear states. Here’s how.

Oh, and if you’re unsure of which Javelin to unlock next, take a look at what we think is the best Javelin in Anthem.

How do I get new wear states in Anthem?

The key to cleaning your Javelin lies in the Wear States menu, within the appearance section of the Forge. When you start the game, you’ll only have two to choose from – old and dirty. Spoilt for choice, right? Unlike with other cosmetic items, you can’t craft new wear states, and you don’t get them as mission rewards either.

The key to getting a clean Javelin and new wear states lies in building your Freelancer Reputation. Anthem has a handful of factions, and as you perform various tasks and undergo faction-specific contracts your reputation will rise.

You’re awarded a clean wear state once you hit Freelancer Reputation level one and while it isn’t mark-free, it’s a massive improvement over the initial condition of your Javelin. As you continue to build your reputation with Freelancers you’ll gain access to better wear states, all of which can be applied to your Javelin in the Forge.

It’s as simple as that!

How do I increase my Freelancer Reputation?

So, how does one go about increasing their Freelancer reputation? It’s pretty easy, actually. While not every task will improve your ranking with the Freelancers, there are a handful of actions that will. The first is completing World Events, found while exploring Bastion in Freeplay – specifically Dominion Incursions and Freelancer-in-Need events.

As well as completing world events in freeplay, you’ll gain a bit of reputation every time you discover a new area, as well as additional rep for finding hidden locations in the open world.

If you like more objective-based gameplay, find Yarrow in Fort Tarsis. The freelancer can be found in the basement, and will provide you with Freelancer contracts from time-to-time. You can also check the contract board next to him for other contracts, which are generated randomly. You can also get reputation points by playing through some story missions, but not all.

And finally, you can gain a bit of reputation by talking to NPCs in Fort Tarsis. While it’s admittedly the slowest way to gain Freelancer rep, it can add up over time. Not all NPCs will award Freelancer rep though, so be sure to keep an eye out for Sev, Max, Neeson Giles, Freelancer Jani, Freelancer Rythe, Faye, Yarrow, Prospero and Zoe.

What are you waiting for? Go and get that clean Javelin you’ve been looking for!