Samsung has announced a new tablet out of the blue ahead of it’s Unpacked event. Here’s what you need to know about the Galaxy Tab S5e including release date and specs.

We weren’t expecting a new tablet from Samsung any time soon, with all eyes on the Galaxy S10 and Galaxy X smartphones at Unpacked on 20 Feb. Nevertheless, the firm’s latest Android tablet is here. Read our Galaxy Tab S6 review and read about the  Galaxy Tab S7.

When is the Galaxy Tab S5e release date?

Samsung has confirmed the Galaxy Tab S5e will be available to pre-order starting in March 2019, and available in the UK from 2Q 2019.

So April at the earliest.

Where or not there will be a regular model (without the ‘e’) remains to be seen – in  fact, it looks like it will be the Galaxy Tab S6. Anyway, take a look at our  Galaxy Tab S5e review.

How much does the Galaxy Tab S5e cost?

There’s no official price yet but Samsung says this tablet is for “someone who wants the best Galaxy features at a unique price point”.

DJ Koh, president of Samsung Mobile said: “The Tab S5e is a top-tier tablet with a sleek design and powerful features, available at a new price point,”

We think this implies a cheaper price compared to the Galaxy Tab S4 which starts at £599 or $650.

That’s a lot of money for some people but consumers will want better specs than the Galaxy Tab A range. So we expect this Tab S5e to come in around £400 to better compete with the iPad (2018).

It being cheaper would be in line with the rumoured Galaxy S10e, which will be a cheaper ‘lite’ version of the phone. 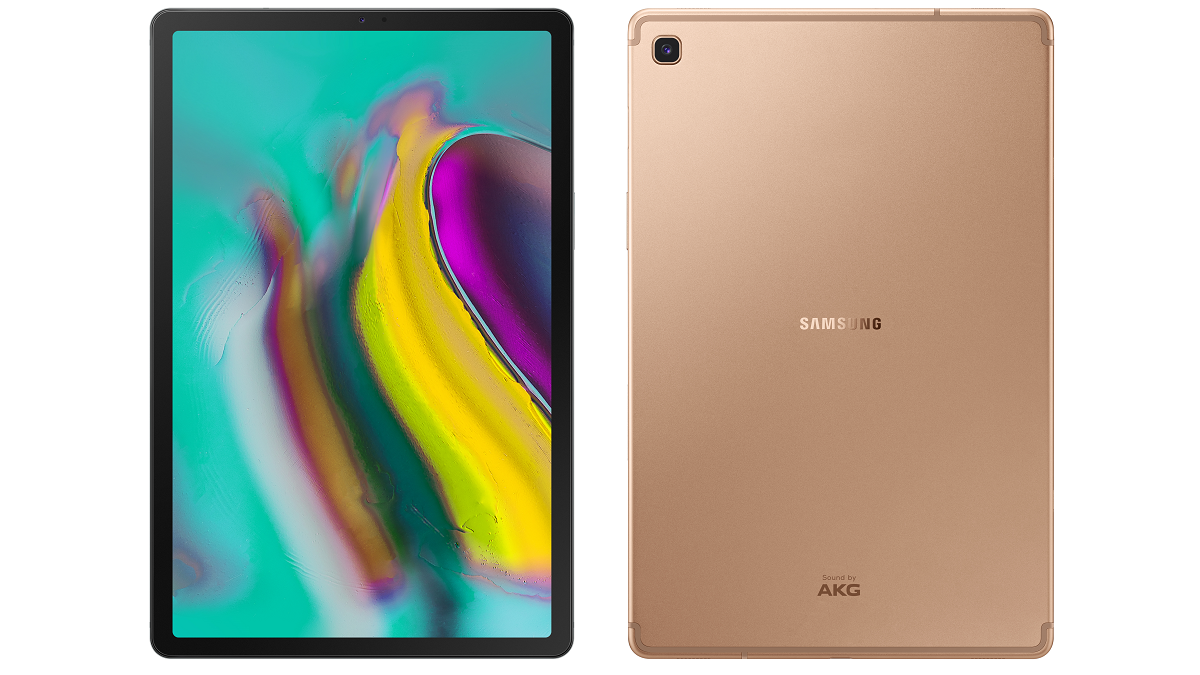 What are the Galaxy Tab S5e specs?

Like the Galaxy Tab S4, the Tab S5e has a 10.5in screen and it’s still Super AMOLED with the same 287ppi pixel density. The bezels are smaller though so the S5e has an impressive 82 percent screen-to-body ratio.

It also comes with 4GB of RAM and 64GB of storage but you can jump to 6/128GB if needs be, plus a microSD card to add up to 512GB more. There’s a lower grade processor though, with a Snapdragon 670.

It’s slimmer and lighter though, at just 5.5mm and 400g. That’s thinner than most smartphones.

Other specs include a fingerprint scanner mounted in the power button, quad speakers tuned by AKG with Dolby Atmos support, a 13Mp rear camera and 8Mp at the front.

A POGO connector means you can use the Tab S5e with accessories like the Book cover Keyboard, POGO Charging Dock. There’s USB-C, as well with fast charging.

Samsung says its the first to come with the new version of Bixby, the firm’s digital assistant similar to Alexa and Google Assistant.

“As the first Samsung tablet to feature new Bixby, the Tab S5e offers a smarter and more convenient way to interact with your device, and serves as an ideal hub to control your connected home devices,” says Samsung.

Lastly, Samsung says the tablet will last 14.5 hours for video playback. Oh, and it will come in three colours: Black, Silver and Gold.

Below is full run down of the Galaxy Tab S5e specs: