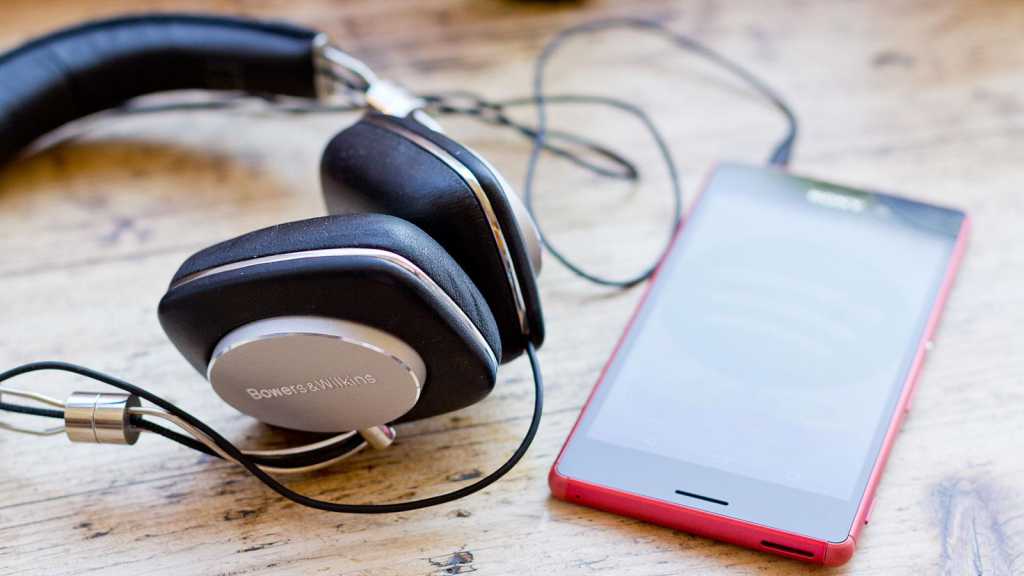 CDs have had a good run, but physical media is falling quickly out of favour. You may even want to get rid of your entire CD collection to free up a lot of shelf space, or you might simply want to listen to those albums on your phone or a smart speaker.

Ripping the music to FLAC is a good idea because this free format offers storage-saving compression but is ‘lossless’ which means you don’t lose any audio quality.

Is FLAC the best audio format?

If you own an iPhone, you might instead want to use Apple’s ALAC format which is the equivalent of FLAC. Your iPhone supports ALAC natively, so you can access and play these tracks in the Music app.

ALAC is convenient because iTunes can rip CDs to this lossless format, so you won’t even have to install any extra software. But you will need to change the rip format from AAC, which is the default. You’ll find it under Edit > Preferences > General > Import Settings. From the drop-down menu, choose Apple Lossless Encoder. 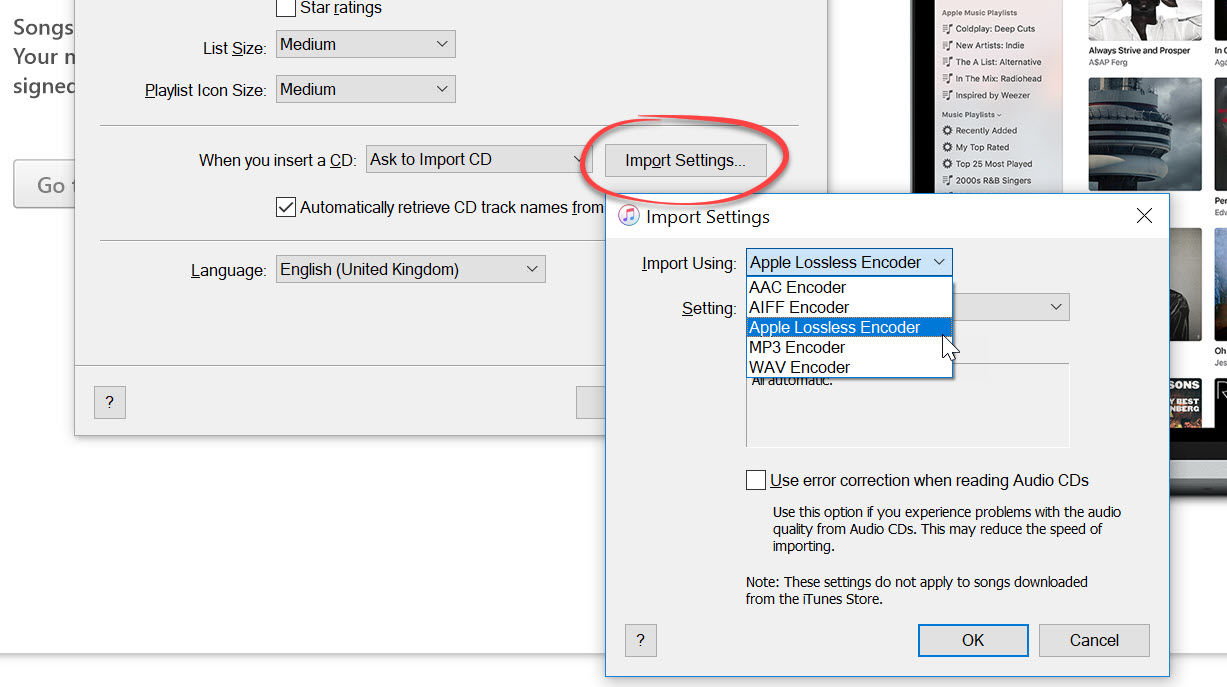 There are two other lossless audio formats: WAV and AIFF. WAV is used mainly by Windows, and AIFF by macOS. The reason you might not want to use either is because they are uncompressed, so music tracks stored in these formats take up a lot of space. FLAC – and ALAC – use around half as much space.

Note that converting to FLAC, or using any other lossless codec won’t magically turn your CD music into high-resolution audio. This is a common misconception. All you’re doing is copying at the same quality: 16-bit/44.1kHz.

It’s the same as thinking you can create HD video by digitising VHS tapes. All you can do is make the best-possible copy without losing any quality in the process.

Is it legal to rip CDs?

It depends upon where you live. In the UK, for example, it is illegal to rip CDs, even for personal use. But in Australia it’s legal so long as you don’t share the ripped music with anyone else.

For those in the US, it’s more of a grey area, but there’s no law that says you cannot rip a CD and move that music to your computer’s hard drive or your phone for personal listening.

What’s the best software to rip CDs to FLAC?

For those with a Mac, go for XLD. It stands for X Lossless Decoder and it offers similar options to EAC on Windows. As mentioned, you can use iTunes if you’re happy to rip to ALAC instead of FLAC.

We’re using Exact Audio Copy on Windows 10 for this guide. First,  download EAC and install it.

During installation, uncheck the GD3 Metadata Plugin unless you fancy paying $8 for the service. You shouldn’t need it, as there’s an alternative – the freedb plugin above it – which will scour the internet and get the track names and other metadata for free. 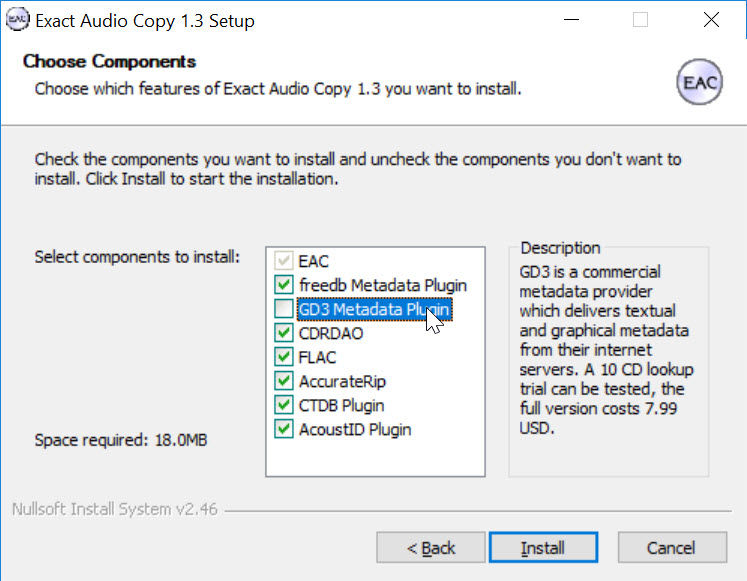 If the installer asks to download and install .NET Framework and you’re running Windows 10, click ‘Skip’ as a later version is already installed on your computer.

When EAC first runs it will walk you through the setup wizard. Don’t skip this as it will configure your CD drive(s) and other settings for the most accurate copy.

When asked to choose between ‘I prefer accurate results’ and ‘Only speed is important’, go for the former option.

Ensure you have inserted a perfect-condition music CD into the drive for the initial test. Any scratches will cause problems for this test.

Click through a few more screens and then select FLAC on the Encoder screen. 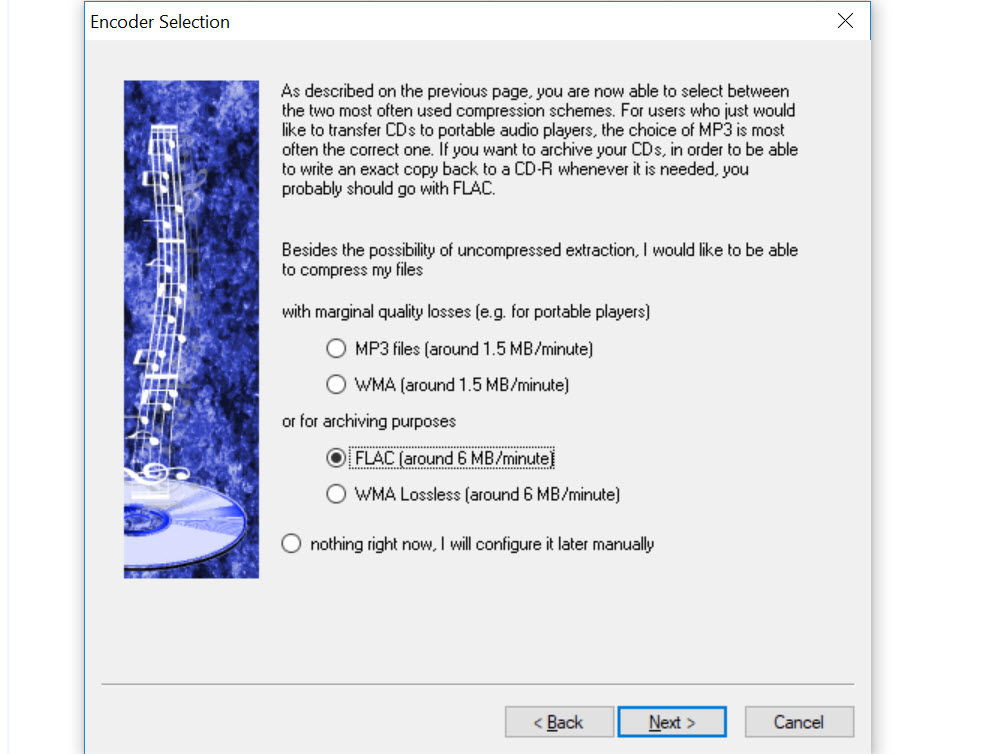 Next, enter an email address in order to use freedb. If you don’t enter one, album and track names won’t be found and entered automatically.

Finally, decide how you want tracks to be named from the drop-down menu.

On the next screen, leave the default setting so EAC operates in Beginner mode. After that you’ll see a pop-up for Accuraterip. This checks ripped files against other files online to ensure there are no differences. Click ‘Configure’ and wait for the confirmation a few seconds later.

At last you’re ready to rip your first CD to FLAC and you should see a list of tracks displayed. If the track names are set to Track01, Track02 and so on, then click Database > Get CD Information From > Remote Metadata Provider. 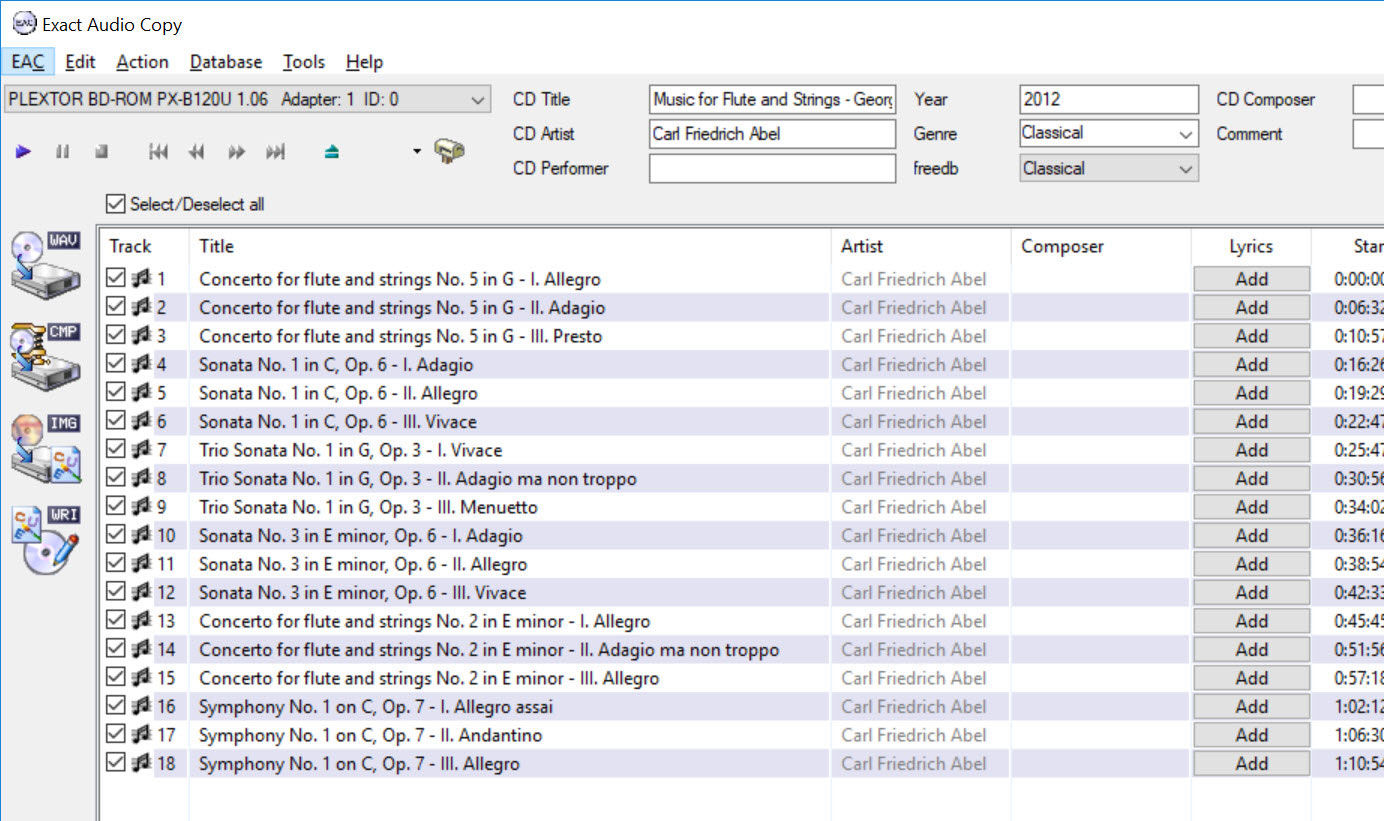 Hopefully, even if you have a particularly obscure CD, the track names will be found and added automatically, along with the album title, artist and year. Of course, you can enter this information manually or edit anything that isn’t correct.

If there’s a blank space below CD cover on the right-hand side, it’s worth adding album art at this point, as this will be displayed in music apps on your phone, media streamer or on your car’s infotainment screen.

The built-in freedb metadata provider doesn’t support album art, but you can click EAC > Metadata options… and use the drop-down menu to select the freedb plugin.

When you’re ready to rip, click the CMP icon on the left. It will ask where to save the files and the process will first rip the tracks to WAV files, then convert them to FLAC and delete the WAV files.

At the end you’ll get a report which explains if the copy went smoothly or if there were errors.

Naturally, you’ll want to play the files. And the good news is that Windows 10’s built-in Groove Music app (below) now supports FLAC as standard. But there are plenty of other apps which can also play FLAC files, including the ever-popular VLC. 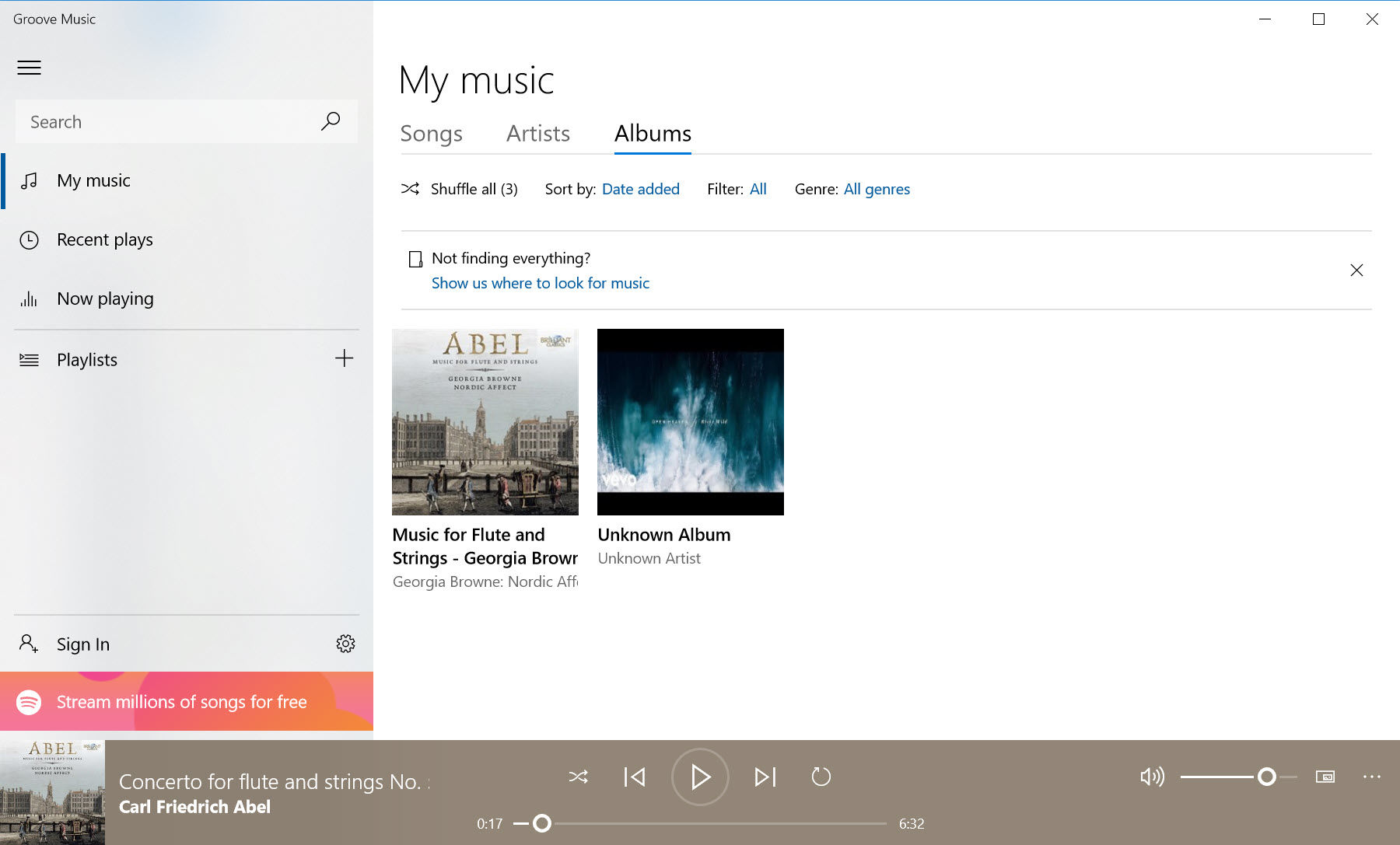 On an Android phone, VLC is again a good option but you can also try AIMP or  Poweramp.

Most in-car systems won’t support FLAC, but it’s worth a try before converting those FLAC files to WAV or a lossless format it will support. If your car has an Android-based infotainment system you might be able to install one of the Android apps mentioned above. If you do need WAV files, Exact Audio Copy can rip your CD to this format, but you can also use an audio converter app (such as AIMP for Windows) to save the existing FLAC files as WAV files, which will be a lot faster.

If you want to play FLAC files on your iPhone, you can install the VLC app. But in truth, it’s a lot easier to convert FLAC files to ALAC as the native Music app supports this lossless format.