Since that announcement it’s all been very quiet on the availability front, and only now – some five months later – is Huawei gearing up to actually sell the Mate 30 Pro in the UK. (Still no word on the standard Mate 30.)

You’ll be able to buy the Mate 30 Pro from Carphone Warehouse from 20 February, with pre-registration opening today. Available in Space Silver, it will retail at £899. While stocks last it will be bundled with a free Huawei Watch GT 2 (46mm Black Sport Edition) and Huawei’s FreeBuds 3 (White).

Having since got our hands on the phone we can also confirm that despite what you may have read  it is possible to install Google services and apps on the Mate 30 Pro.

In the UK the Mate 30 Pro will cost £899 via Carphone Warehouse, but come with a free smartwatch and wireless earbuds while stocks last.

As before, storage is expandable via Huawei’s proprietary Nano Memory Cards, so for many people the base models will be just fine. That second slot can alternatively be used for a second SIM card, and both slots support 5G.

Does the Mate 30 have Android and Google apps?

Unsurprisingly, Huawei was keener to talk about specs and features during the launch than Android and apps.

Since this is so important, let’s quickly deal with that. Yes, the Mate 30 & Pro runs Android. But it’s an open source version of Android 10, since Google cannot do business with Huawei due to the current ban.

That means the Mate 30 and Mate 30 Pro will ship without YouTube, Google Maps, Gmail and the Google Play Store.

We have managed to install these on our own sample phone, and you can read our guide which explains step by step  how to sideload Google apps on the Mate 30 Pro.

Since Huawei’s EMUI – now on version 10 – runs on top of Android, there’s no immediately obvious difference compared to previous models which were Google certified. EMUI has a few new features including an always-on screen (which is customisable and which can match your Watch GT 2), dark mode (for using your phone at night), AI gesture control (for contactless screen control) and HiCar for using the phone’s features in your car.

Design-wise, the new phones look good. They have a circular band surrounding their camera which Huawei says is designed to look like a DSLR lens. They’re available in Emerald Green, Space Silver, Cosmic Purple and Black. The gloss-to-matt finish glass finish is also new, and the matt portion is less slippery.

There are two extra options: Forest Green and Orange which have a ‘vegan leather’ rear cover, which is something new from Huawei.

Both phones share certain components, including the Kirin 990 processor. This system-on-chip includes a 5G modem and has a beefed-up NPU for improved AI. They also support Huawei’s M-pen, the stylus which comes with the Mate 20 X.

The Mate 30 Pro, of course, gets the lion’s share of features. Chief among these is the new Horizon screen. The front glass has 88-degree curves at the side and is much like the ‘waterfall’ screen on the Vivo Nex 3. There’s no cutout for a speaker, so you get the same under-screen tech as on the P30 Pro and that works just fine.

Huawei has also ditched the volume buttons as was rumoured, again like the Nex 3. Instead the side is touch-sensitive and you can customise where you want the volume buttons to be (you slide your finger up and down to adjust volume, not press) as well as allocate virtual buttons to gaming and camera setup. We’re not too keen on this idea, but time will tell whether it’s a backwards step or not.

Both phones have in-screen fingerprint sensors, but now come with 3D face unlock (as Apple has had for several years now) so you can choose which authentication method to use.

Unlike last year wireless charging is now on both the Mate 30 and 30 Pro, and it has been increased to 27W for quicker recharging.

Reverse wireless charging is available, and is now three times faster than before.

Charging via USB-C remains at 40W and Huawei is now offering a power bank that delivers SuperCharge speeds, plus an in-car wireless SuperCharger.

We’ve mentioned the top-level camera specs already, and while there’s nothing to write home about when it comes to the Mate 30’s setup, the Mate 30 Pro does depart from what we’ve seen before.

The rumours of twin 40Mp cameras were true, and the principle reason is to improve video recording and add new modes and features.

The Cine camera – as it’s called – has an ultra-wide lens and a 1/1.54 inch sensor and a maximum ISO of 51,200 that’s designed for capturing video at 4K/60 with extended dynamic range. It’s also capable of recording low-light timelapse video in 4K and shooting low-light photos. Plus, it’s also capable of recording video with real-time bokeh, so you can shoot more professional-looking video with blurred backgrounds.

The other 40Mp camera – the main camera for photography – uses the same 1/1.7 inch sensor as the P30 Pro with an RYYB sub-pixel arrangement, which is responsible for the “attracts 40% more light” claim.

The Mate 30 Pro also supports ultra-slo-mo up to 7680fps, which we are looking forward to testing out. 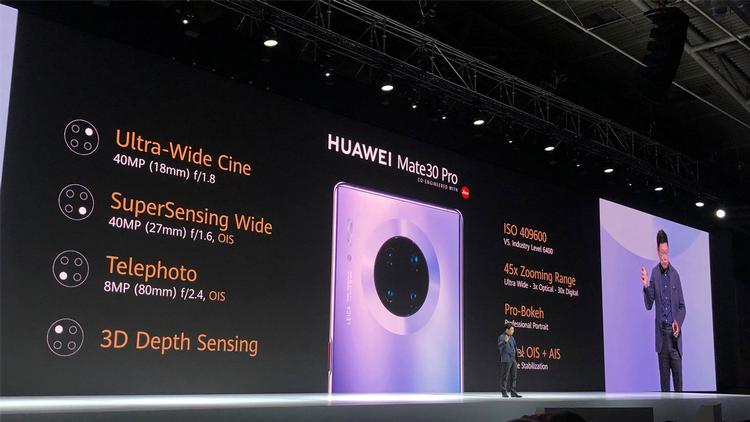 Read our in-depth hands-on Mate 30 Pro review for more information about the phone.