A teeny bit smaller than the 6.4in Galaxy Note 9 and Galaxy S10 Plus on paper, but actually feeling significantly smaller in the hand thanks to some seriously slimmed-down bezels, the standard Note 10 has a 6.3in screen. Samsung has dramatically increased the screen-to-body ratio by more than 10%, and by adding an Infinity-O panel with selfie camera cutout it has achieved a staggeringly high 94.7%. In real terms the Note 10 is more than 10mm shorter and 5mm narrower than Note 9. 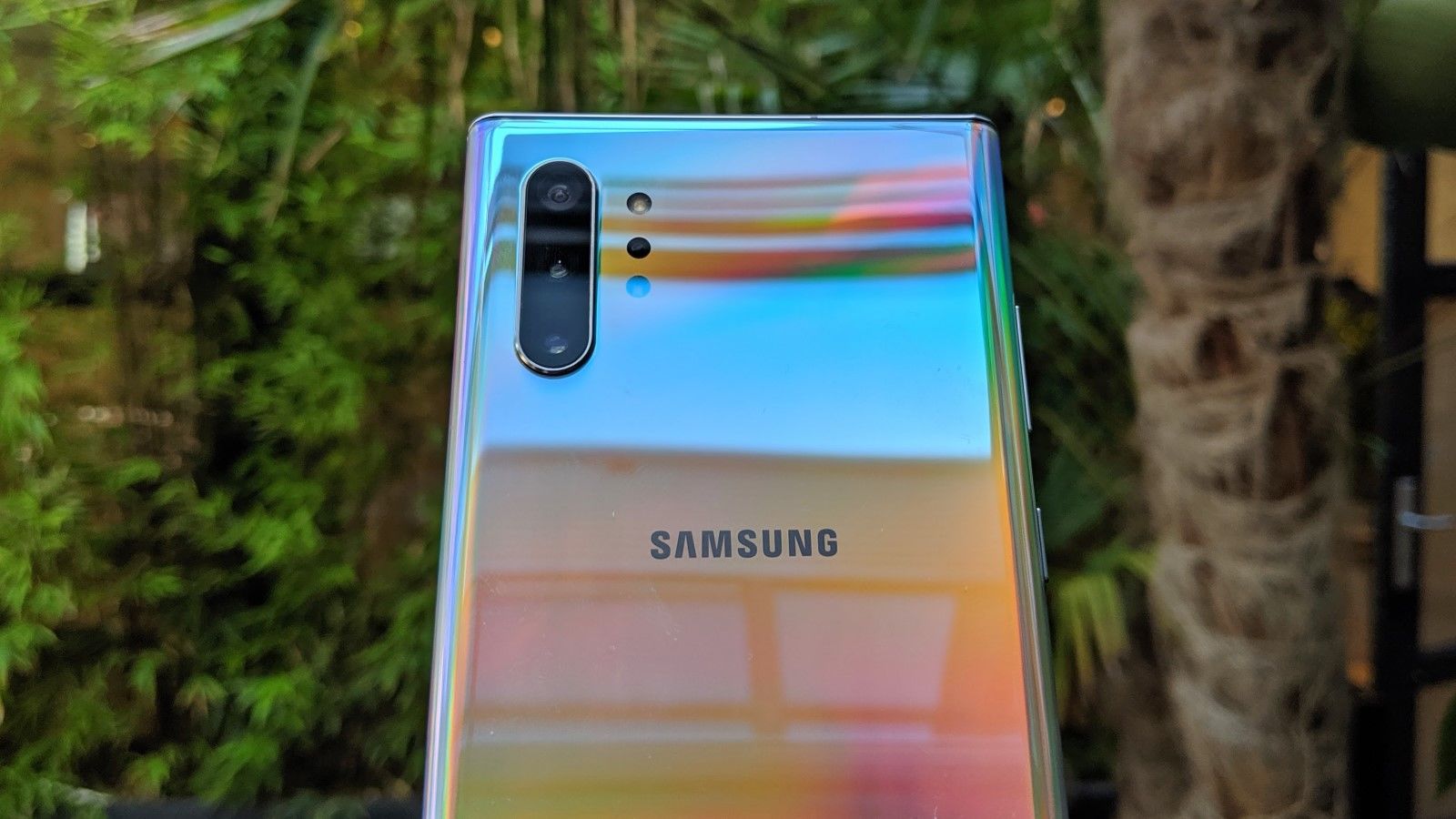 For the first time you have a choice in whether or not you want a larger handset, with the Note 10 Plus’ display coming in at 6.8in. Those with smaller hands will sacrifice some battery capacity (3,500mAh vs 4,300mAh) and microSD support for their crimes, while the screen resolution is also reduced from Quad-HD+ to just Full-HD+, which should help fill the gap in run time.

It’s possible you wouldn’t actually notice this, since Samsung flagships default to a Full-HD+ resolution in any case, and though the 401ppi density might be down from 516ppi in Note 9 it is still pretty high. The internal storage has also doubled from what we saw in its predecessor, and with 256GB as standard we can’t see too many users mourning the removable storage. You also get an option of 512GB internal storage with the Plus.

It’s worth pointing out that the display on both new Galaxy phones is absolutely stunning, pretty much all screen with an edge-to-edge design, support for HDR10+ and brand-new in-display fingerprint sensors. The Dynamic OLED tech is bang-on, producing vibrant colours and rich blacks, and complemented by the new mirror-finish colour options, particularly Aura Glow. 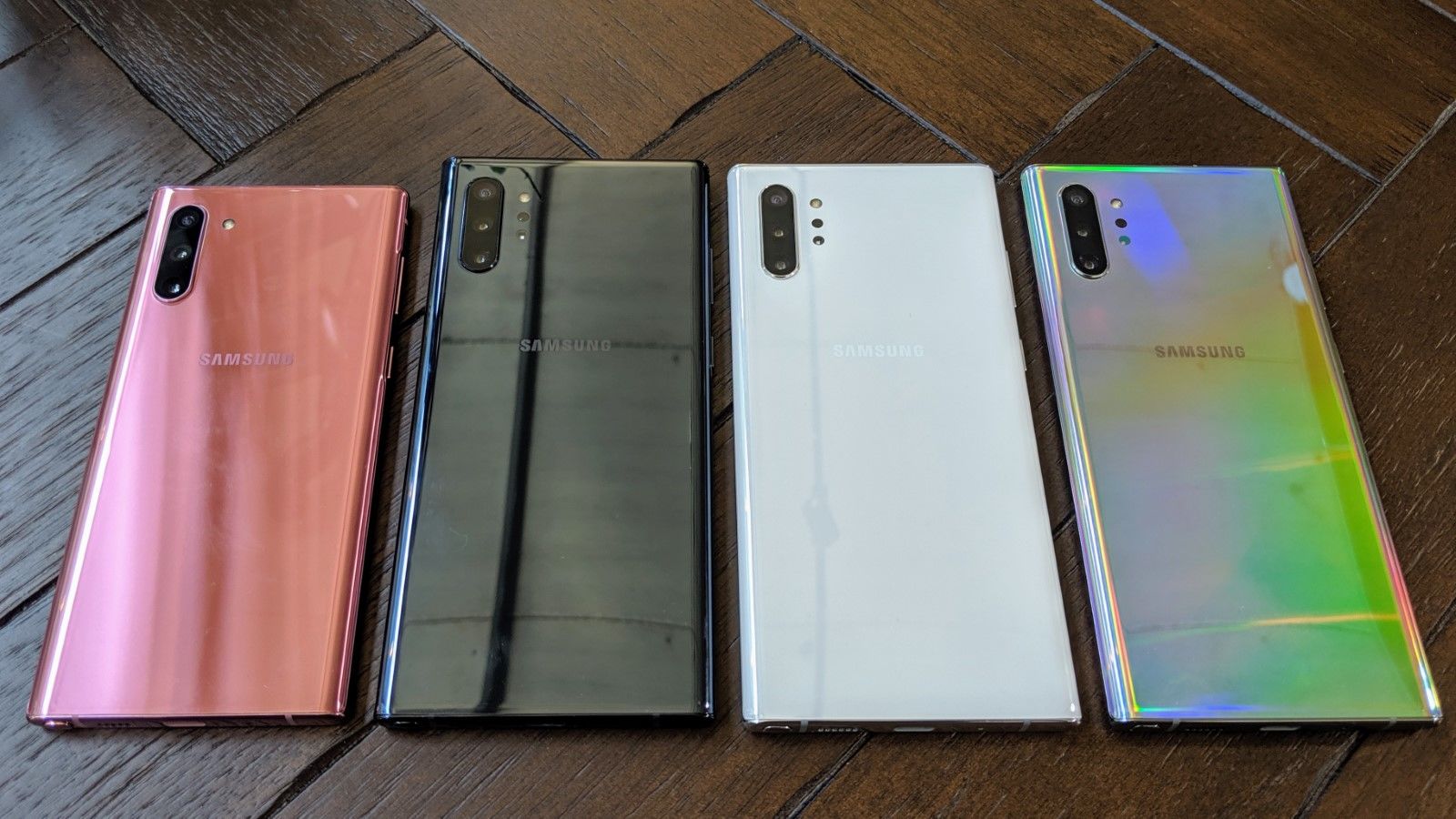 Both Note 10 and Note 10 Plus come in this new silvery shade that can only be described as a mash-up between a rainbow and an oil slick, as well as Aura Black. The Note 10 additionally comes in Aura Pink, while Aura White is reserved for the Note 10 Plus. They are IP68-certified for waterproofing, and coated in Gorilla Glass 6 for protection from drops.

On the down side the rumours were true and the headphone jack is a casualty, along with the Bixby button and heart-rate sensor, which we are admittedly much less bothered about, but there’s a lot here that is new to distract us from that pain point, including a bundled pair of AKG USB-C earbuds and faster (15W) wireless charging (including Wireless Powershare). Wired charging is even faster – now up to 45W on both models, though only a 25W charger is supplied in the box ( find out how to unlock faster charging). Samsung reckons you’ll get a day of power from a 30-minute charge. 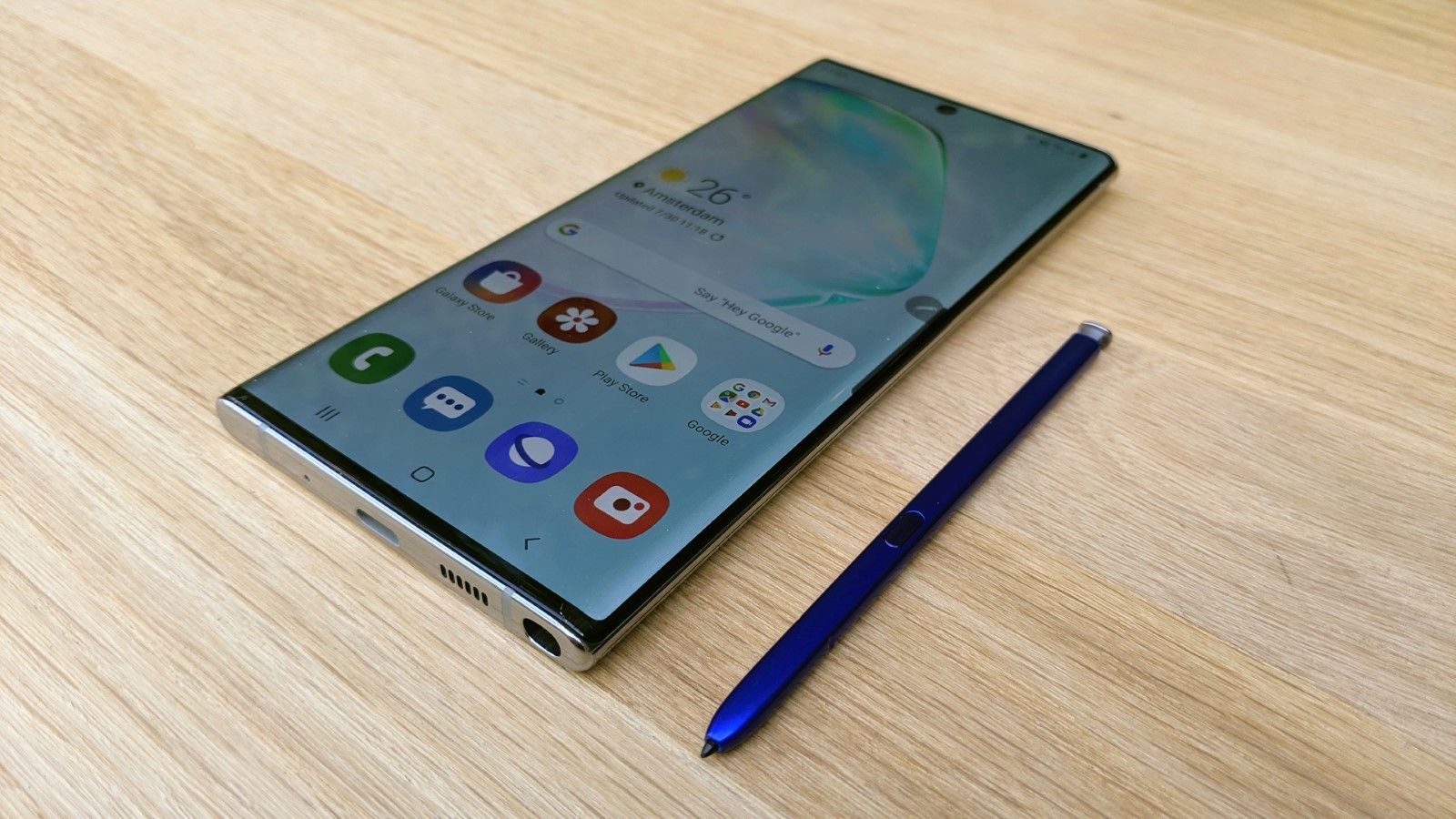 The S Pen, which is one of the key selling points of the Note 10 series, has had an upgrade. It’s got some brand-new ‘ Air Actions‘, enabling you to treat Samsung’s famous stylus as if it were a magic wand.

You can use it to trigger the camera, or make gestures in the air, without ever needing to touch the screen. Swiping left or right in the camera app changes the mode, and swiping up or down swaps between front and rear cameras. A circular motion lets you zoom in or out.

The new S Pen connects to Note 10 over Bluetooth 5.0 LE, and it can last up to 10 hours on standby. Other connectivity features of the new Galaxy phones include Wi-Fi 6, NFC and GPS. 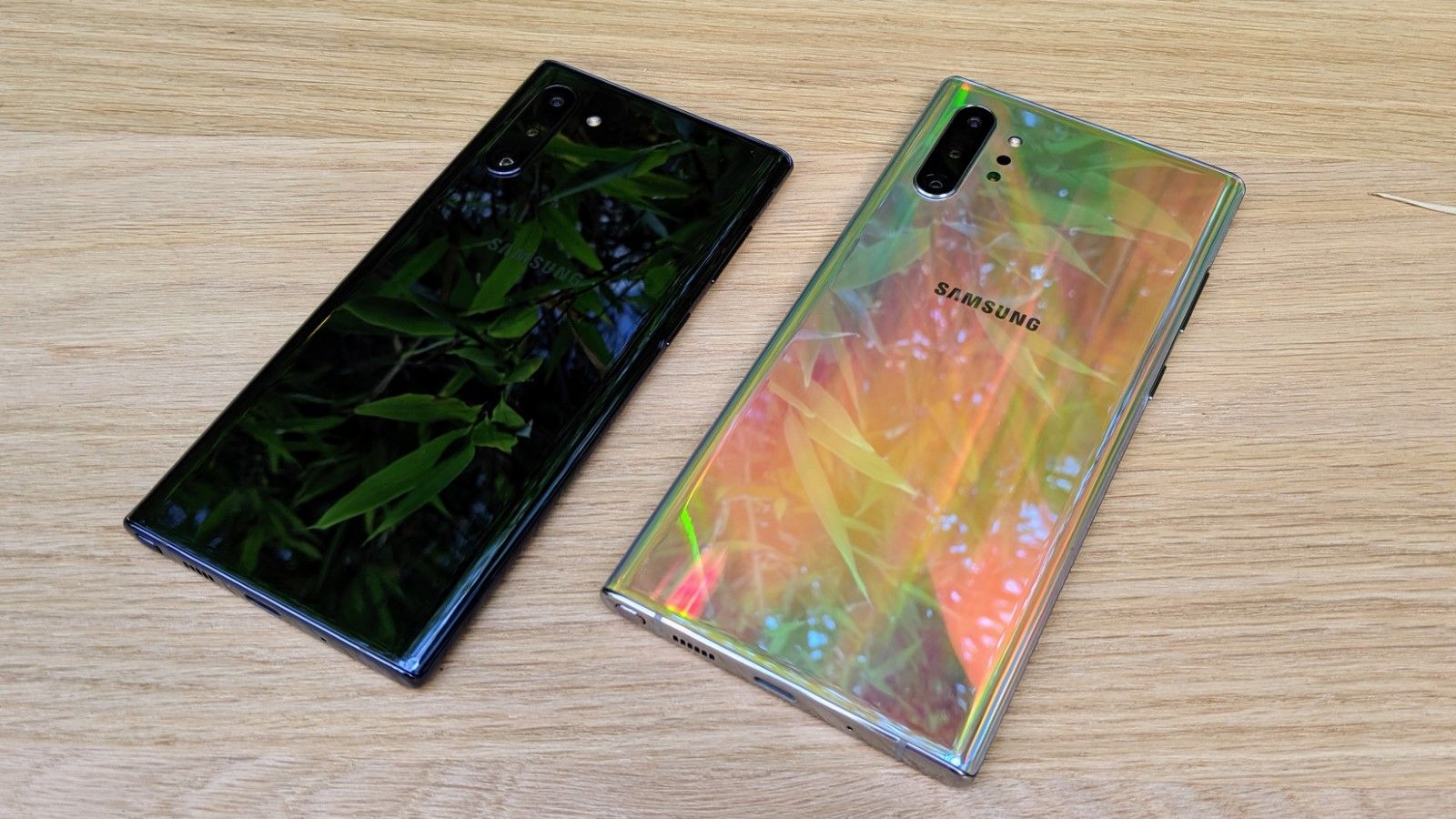 Also new in the Note 10 is a 7nm processor, paired with 8GB of RAM in the standard model and 12GB in the Plus. Samsung has been pretty vague about what actually is this chip, but ahead of the launch it was rumoured to be using the Snapdragon 855 Plus in the US and its latest Exynos 9825 elsewhere. This is Samsung’s first 7nm mobile chip, so should bring performance improvements over Galaxy S10.

The inclusion of the Snapdragon 855 Plus is also interesting because the GPU has been greater tuned for performance, and according to Qualcomm gives graphics a 15% boost. The Kryo 485 CPU has also seen a minor overclock (around 4%). 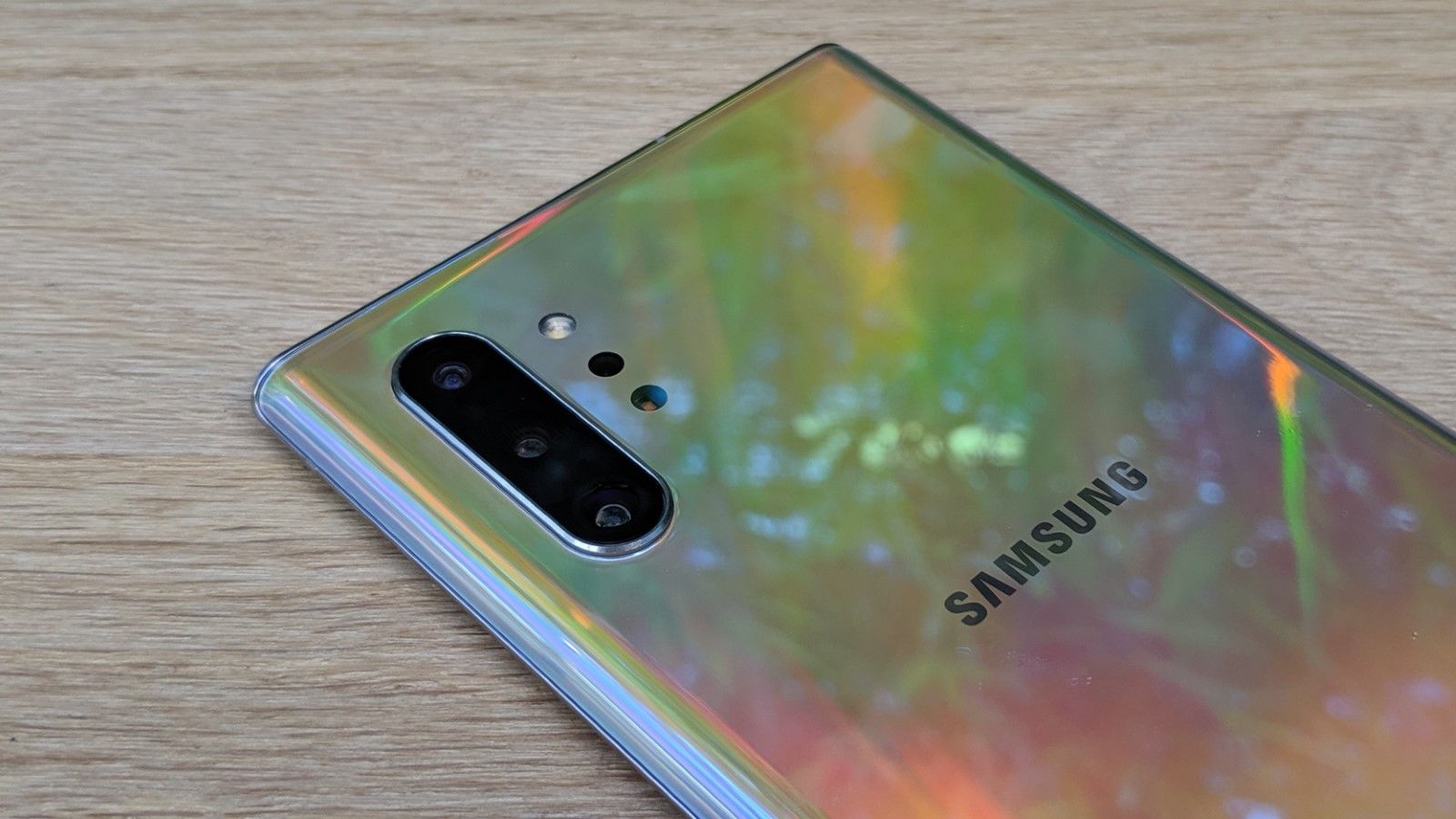 Both models get an upgrade in the camera department, rocking the same 10Mp selfie camera as Galaxy S10, but around the back the standard Note 10 has a triple-lens assembly while Note 10 Plus adds DepthVision and Time of Flight sensors. It’s the same 12Mp duo with OIS as found in Note 9, but with the addition of a 16Mp ultra-wide sensor.

When is the Galaxy Note 10 on sale?

Note 10 and Note 10 Plus were announced at Galaxy Unpacked on 7 August 2019. The phones were available to pre-order immediately, and went on sale on 23 August.

How much does the Galaxy Note 10 cost?

Read next: Best new phones coming in 2019 and  Looking ahead to Galaxy S11