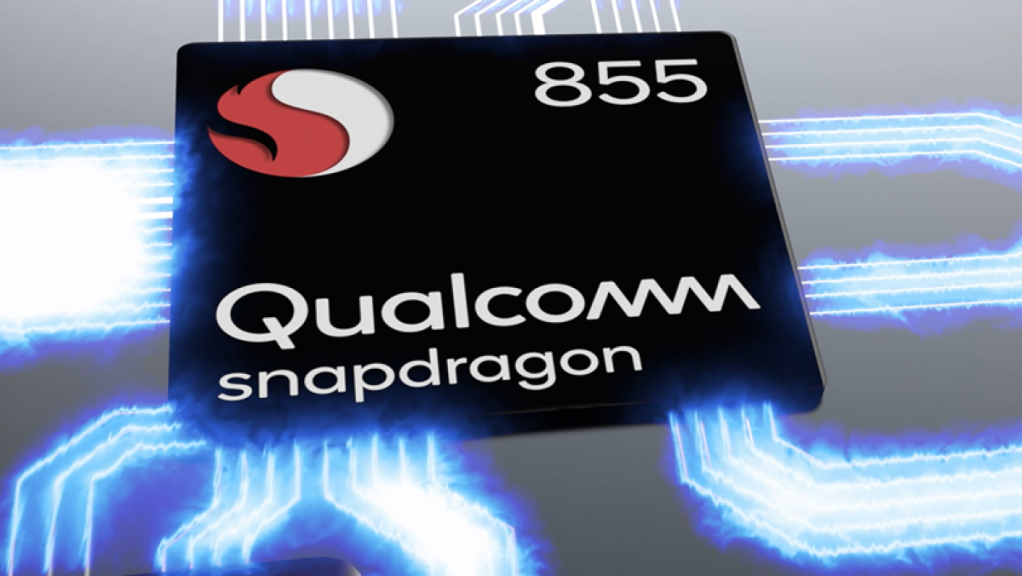 At its annual Tech Summit, this year held in Hawaii, Qualcomm unveiled its next-generation smartphone chip, the Snapdragon 855. It is the first to offer 5G and will be in many of the 2019 flagships from Samsung, OnePlus, Google and other phone manufacturers.

The CEO of OnePlus confirmed at the Summit that its next phone would be available in early 2019 and would support 5G. That means it’s likely to be the OnePlus 7 in February or March, which is when you’ll actually be able to get a Snapdragon 855-equipped phone in your hands.

A spokesperson for Samsung also took to the stage to confirm that the next major release would feature the 855, though presumably some markets (including the UK) will get Samsung’s on Exnyos processor instead.

It’s important to understand that, like previous Snapdragon chips (and the processors from rivals), the 855 isn’t just a CPU. It’s a system on a chip (SoC) and also includes a graphics chip, signal processors and more.

The 855 is Qualcomm’s first 7nm processor. It isn’t the first, with Apple and HiSilicon (Huawei) beating it to the punch. However, Qualcomm says that unlike its competitors, the Snapdragon 855 offers the best ‘sustained performance for gaming’ while others don’t perform as well, with one of these degrading as the minutes pass.

But how does the 855 compare to the 845? Well the CPU part is 45% faster, which is the biggest performance jump from a predecessor.

The CPU has a new ‘Prime’ core, a single core which runs at 2.84GHz. It then has a trio of 2.42GHz performance cores. As usual there are four low-power cores which now run at 1.8GHz.

The 845 also had the ability to boost a single core to a higher frequency, but it could only do so in single-core mode. As soon as the other three power cores were activated, the four had to run at the same speed.

Not so with the 855 which can run its Prime core at 2.84GHz even while the three power cores are operational.

But games won’t simply run faster. There are also enhancements to audio and other areas. That’s why the 855 has what Qualcomm is calling Elite Gaming.

In terms of audio the Snapdragon 855 supports aptX Adaptive and True Wireless Stereo Plus, which means there should be no lip sync problems even when you’re using Bluetooth headphones. 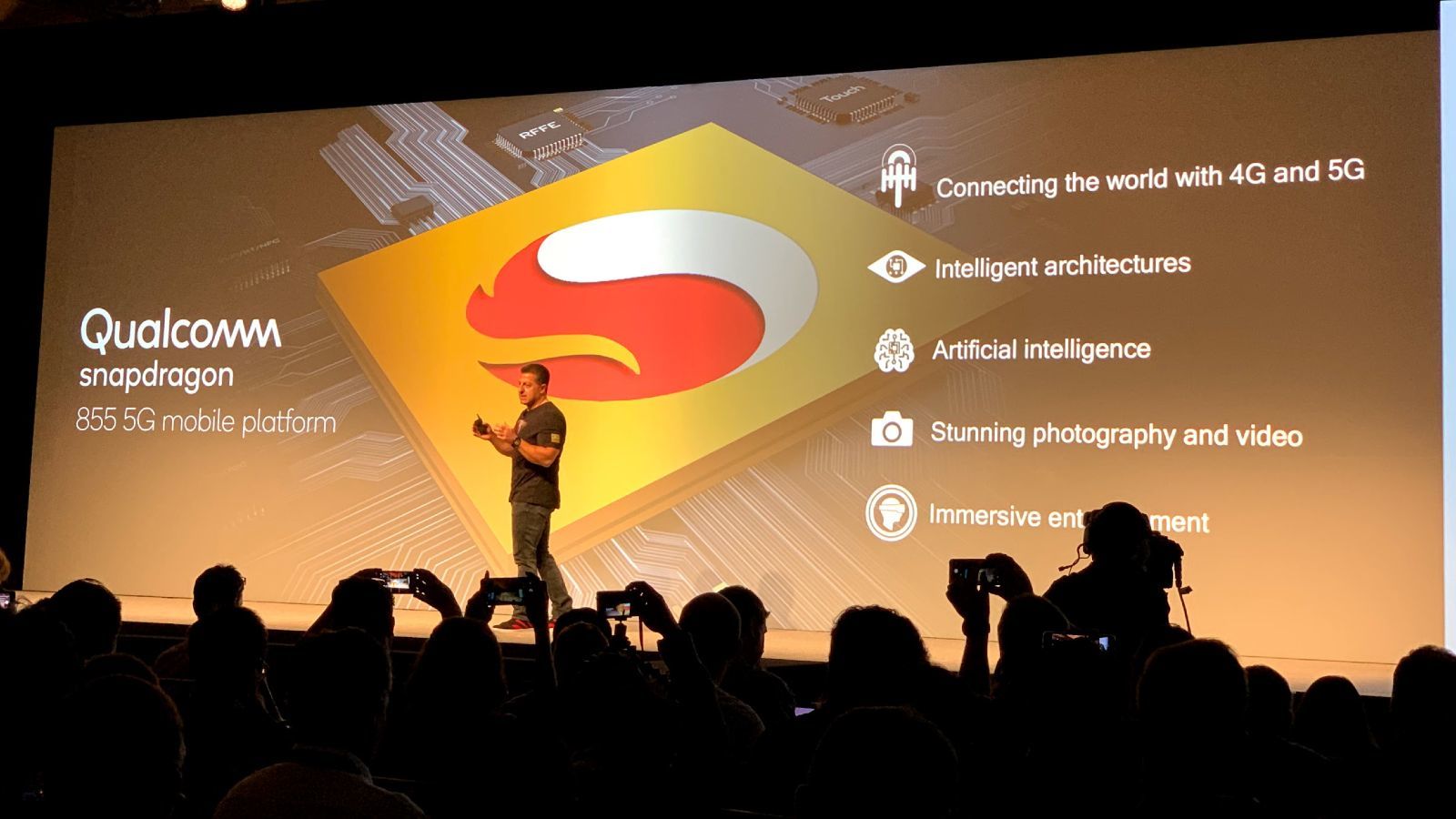 In terms of Wi-Fi, there’s support fo 802.11ax, also known as Wi-Fi 6. It supports better speed and coverage. It also supports 802.11ay, which operates at 60GHz and supports speeds of 10Gb/s. That’s hugely fast. This is good for future proofing, but until your home router or Wi-Fi hotspots support ay, you won’t benefit from these speeds. 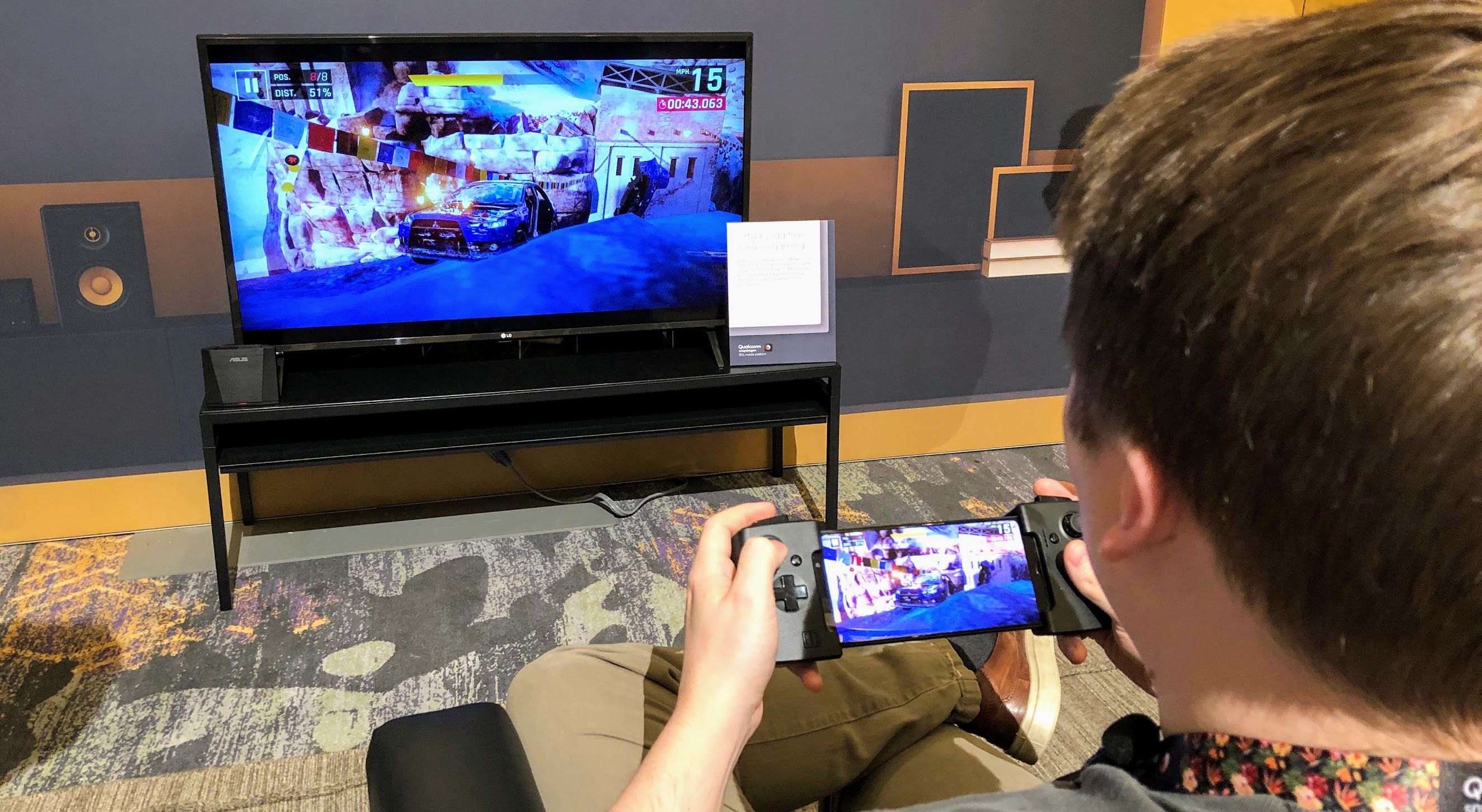 We tried a demo where 802.11ay was being used to show an almost lag-free gaming experience. In it, we played Asphalt 9 Legends on a phone equipped with the Snapdragon 855. The video was transmitted over 60GHz Wi-Fi to a TV and sure enough, there was no perceptible lag.

As you’d expect, AI is improved in the Snapdragon 855. The Hexagon 690 – a digital signal processor – is a lot faster, while using very low power. It works in conjunction with the GPU and CPU to offer ‘heterogenous’ compute: not simply one core, but an entire system.

Qualcomm says it can handle over 7 trillion operations per second, which is 3x more than the AI in the Snapdragon 845, and 2x as quick as the Huawei Kirin 980.

More importantly, it’s likely developers will write apps which support the 855, whereas there is still very little support for the Kirin 980.

Google’s Eddie Chung explained how this would improve Google Lens, saying that rather than relying on the cloud, much of the processing can now be handled locally.

Previously, text recognition and translation could be done locally, but with the Snapdragon 855, it’s around 3x faster.

When you factor in 5G, the computer vision can recognise what it sees, then download files, such as 3D models, much faster so you can use your phone to see how different furniture would look in your room, for example.

Tech specs aren’t too important here: it’s all about what the Snapdragon’s AI can do for you. One example offered was that your voice can be extracted from a noisy environment so the recipient of a Skype call can hear you clearly (even if you can’t clearly hear them!).

It will also let you see how, for example, your hair would look in different colour in real time as you use the selfie camera on your phone.

Finally, it will allow refocusing images after shooting even if your phone doesn’t have a second camera or a depth sensor. But more usefully, AI can help sharpen blurry images, and enhance clarity and detail in all photos.

The Snapdragon 855 will also support an in-screen fingerprint sensor called the 3D Sonic sensor. Instead of recording a 2D image of your finger, it uses an ultrasonic sensor to build up a 3D model. This is said to work even if your finger is wet or oily.

The sensor isn’t part of the 855, and you’ll only see it if phone manufacturers decide to use it. It won’t put an end to the current trend for screen notches, since that will still be necesary for the selfie camera at a minimum. 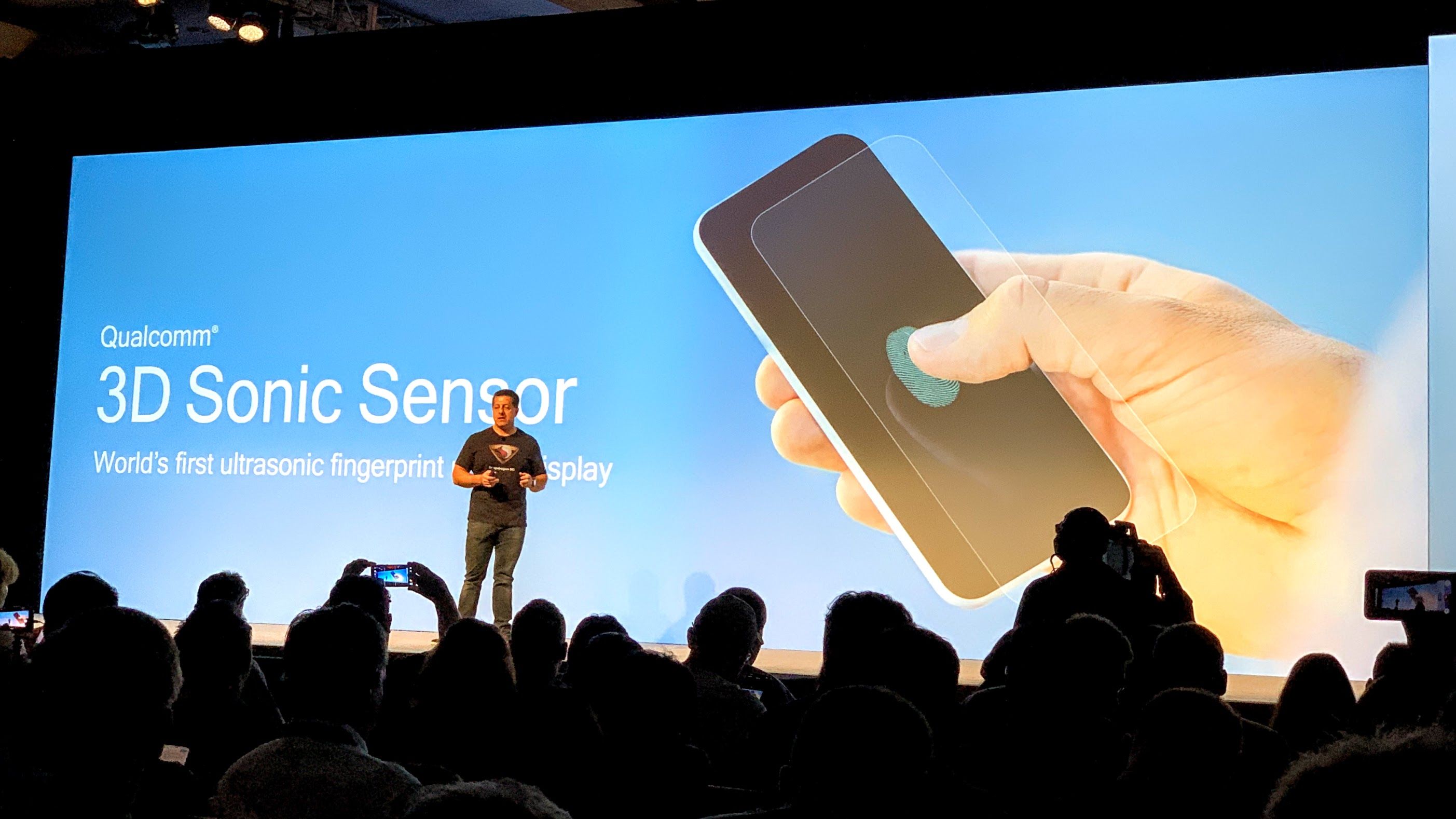 Part of the 855 platform is a brand new image signal processor called the Spectre 380. Like the NPU in the Kirin 980, this intelligently understands the scene when you point the camera and adjusts parameters to capture the best photos and videos.

The camera on any phone relies on the signal processor to deliver great-looking photos. It isn’t simply about the sensor and lens. With the Snapdragon 855, Qualcomm says it has put cores from the CPU, GPU and DSP inside the ISP for the first time, which is why it’s being called the world’s first computer vision ISP. It now handles everything from colour to depth sensing, all in hardware.

It means you can shoot 4K video at 60fps with depth sensing, so you can get the same kind of portrait-effect blurry background in video. 2019 flagship phones should be able to produce much more cinematic looking video.

You can also do other things, such as fading out the background or making it black and white while keeping your subject in focus and colour.

Another movie feature which the ISP enables is the ability to freeze a a person or object while the rest of the scene keeps moving.

The fact this is all done in hardware in the ISP means considerable power saving, so using these features shouldn’t drain your phone’s battery quickly.

Snapdragon 855 will support the HEIF image and video, just like on recent iPhones. But while Apple is using it mainly to reduce file size, Qualcomm is using the full set of features, including saving metadata including the depth map, burst photos, animated photos, plus photos from all the phone’s cameras in one HEIF file.

There’s also support for HDR10+ video capture and Qualcomm said that “One OEM will bring this to market in 2019.” 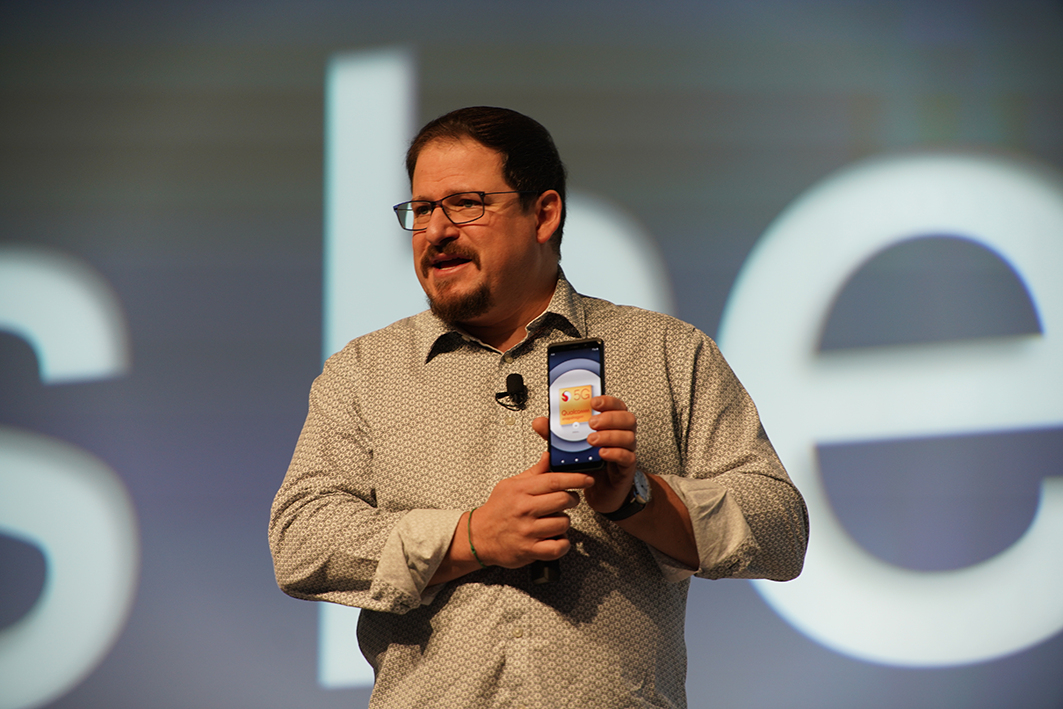 Despite what you may imagine, 5G isn’t built into the 855. It’s actually an optional extra – the X50 modem. What’s built into the 855, and what you’ll get with some phones is a next-gen 4G LTE modem. This is the Snapdragon X24, a Cat 20 model which supports 2Gb/s – twice the speed of current 4G modems – but until mobile operators offer this, you won’t see anywhere near these speeds.

Even if a phone offers 5G as well, it can seamlessly revert back to 4G when out of 5G coverage.

What will 5G do for you? It significantly increases the connection speed, which will change the way people use their phone. It means you can stream 4K or even 8K video. It means you can download videos for offline viewing in seconds and also enables mobile games which need very low latency, such as multiplayer titles which rely on all players being in sync with each other. That isn’t really possible with 4G.

It will also allow you to keep all your data in the cloud and use it as if it were local. That’s true today with small files such as documents, but 5G will allow you to access video in the same way.

You can read more about 5G and how it works.