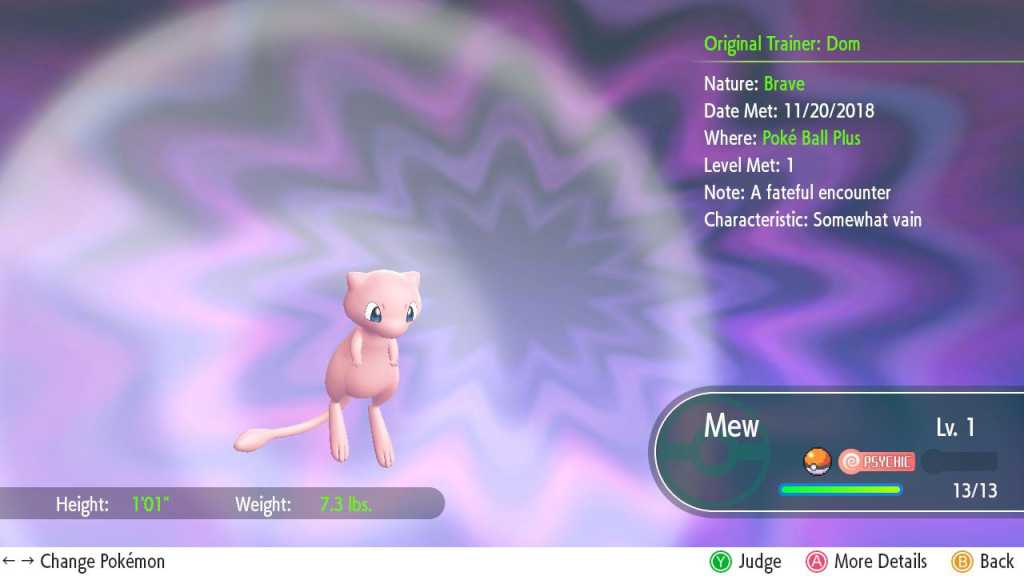 Pokémon Let’s Go is the reimagining of the original Pokémon Yellow, Red and Blue games, stripping the Pokédex back to just the original 151 Pokémon that a lot of us grew up with.

Yup, that’s right, 151 – the game’s Pokédex goes all the way up to Mew, the mythical Psychic-type Pokémon that has always been particularly tricky to get hold of.

Luckily, it’s arguably easier than ever before to get hold of Mew in Pokémon Let’s Go Pikachu and Eevee. Unluckily, it requires you to buy a Poké Ball Plus controller.

How to get Mew in Pokémon Let’s Go

First off, as we’ve said, you’ll need to own a Poké Ball Plus controller.

This is a special controller for the Switch game that costs £44.99/$49.99 (or you can buy it in a bundle with the game) and looks just like a mini Poké Ball, but with enough controls to let you play the whole game, and some extra features to let you transfer Pokémon to the ball to carry them around and trade with friends. 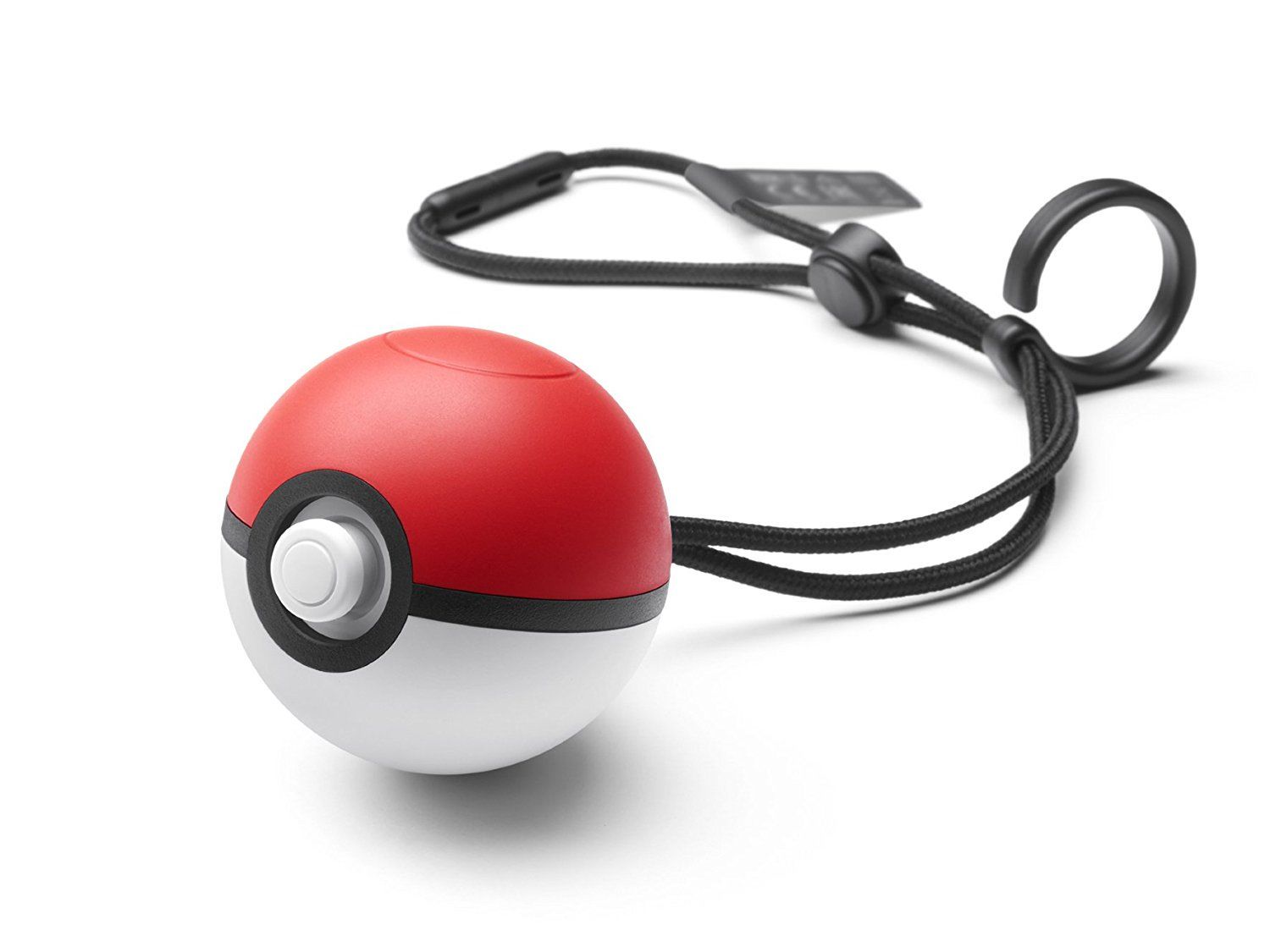 You also can’t borrow or share a Poké Ball Plus – Nintendo thought of that too. Each Plus only ‘contains’ one Mew, and once it’s gone, it’s gone. So don’t go buying a second-hand one hoping for a Mew, or thinking you can share with siblings or friends.

Once you have the Poké Ball Plus you’ll need to set it up as a controller in the game. You might need to first pair it with your Switch if you haven’t already – simply plug it in to charge a bit with the included USB-C cable.

Then open up Pokémon Let’s Go, pause the game, and go to ‘Options’ by pressing Y. There you’ll see controller settings – go in, and then press a button on the Poké Ball Plus to activate it. Hopefully you’ll see its icon turn red, which means you’ve got it up and running as the main controller. 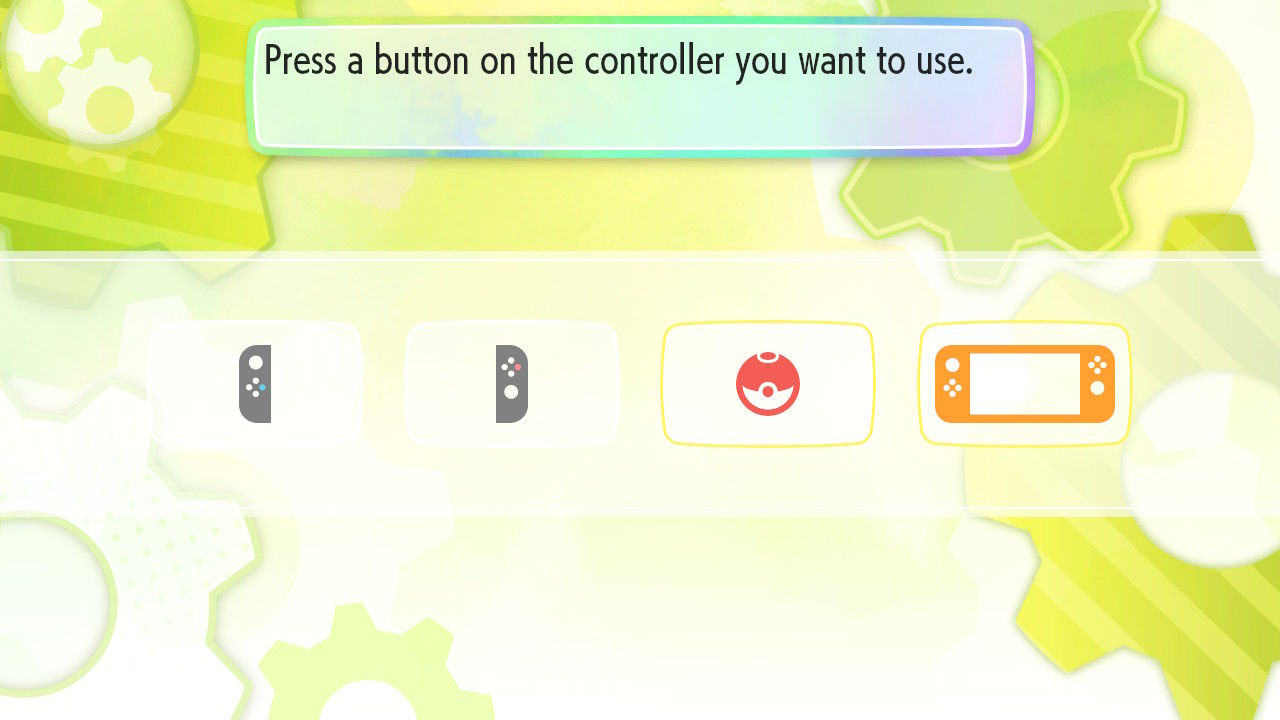 Using the Poké Ball as your controller now, go the main pause menu, then to ‘Communicate’, and then select ‘Mystery Gifts’. 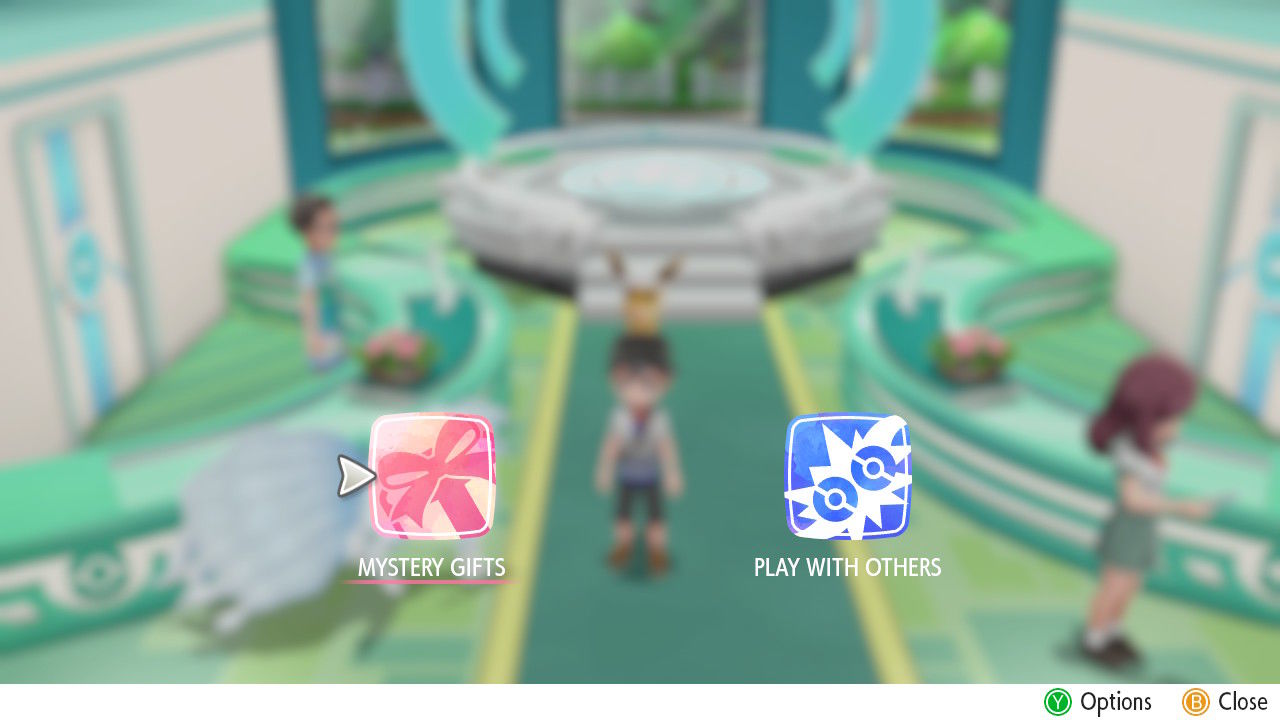 Select ‘Get with a Poké Ball Plus’, and then agree to the two prompts about receiving the gift and connecting to the internet. Stay connected and make sure not to turn off either the ball or your Switch, and you should pretty soon find yourself with your very own Mew! 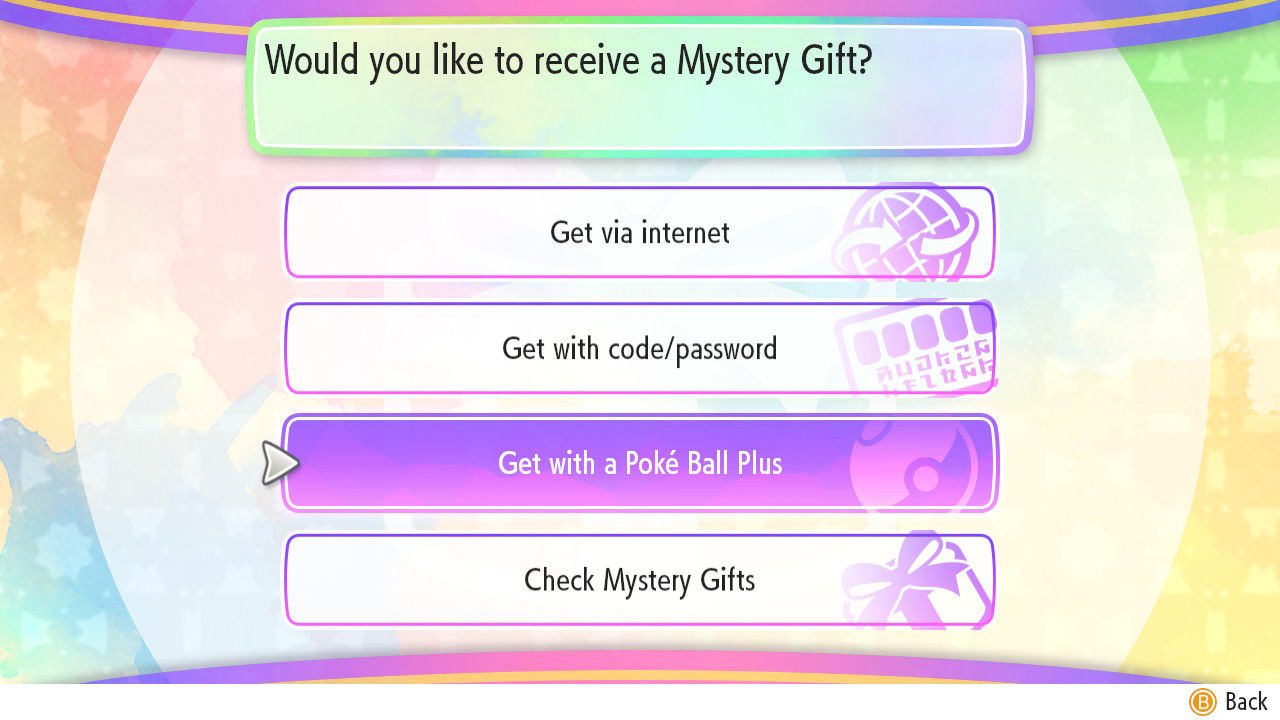 Can you transfer Mew from Pokémon Go?

No, we’re afraid not. As Mew is a Mythical Pokémon in Go it cannot be transferred, even to the Switch.

Is there any other way to get Mew?

Right now, sadly not – a Poké Ball Plus is your only option. That said, we wouldn’t be surprised if Nintendo added other options in the future, most likely through limited-time events or physical pop-ups. For now though, this is it.

The good news is that you’re guaranteed your Mew will be at least half-decent. It will always have ‘Great’ stats at a minimum, with three of its six stats guaranteed to be ‘Best’ – though it’s random which. 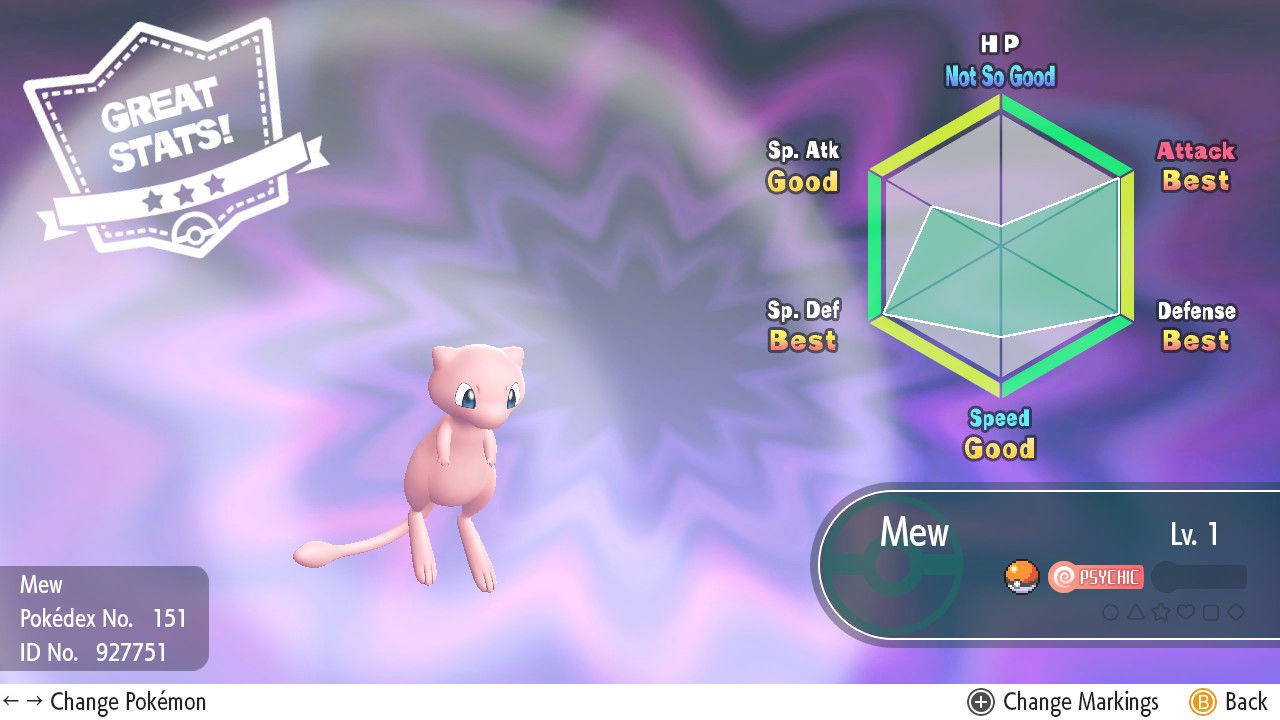 The other three stats will be at random levels, so this is where you might have less luck – ours has pretty poor potential for HP, for example. If you want to use it in battles, the main stats to worry about are probably Speed and Special Attack – if they’re good, your Mew should be a pretty capable attacking Pokémon. We didn’t get so lucky.

Finally, one thing to note – no matter where you are in the game when you get your Mew, it will be level 1, so you’ll probably need to put some time into levelling it up! You didn’t expect to get handed a level 100 Mew, did you?