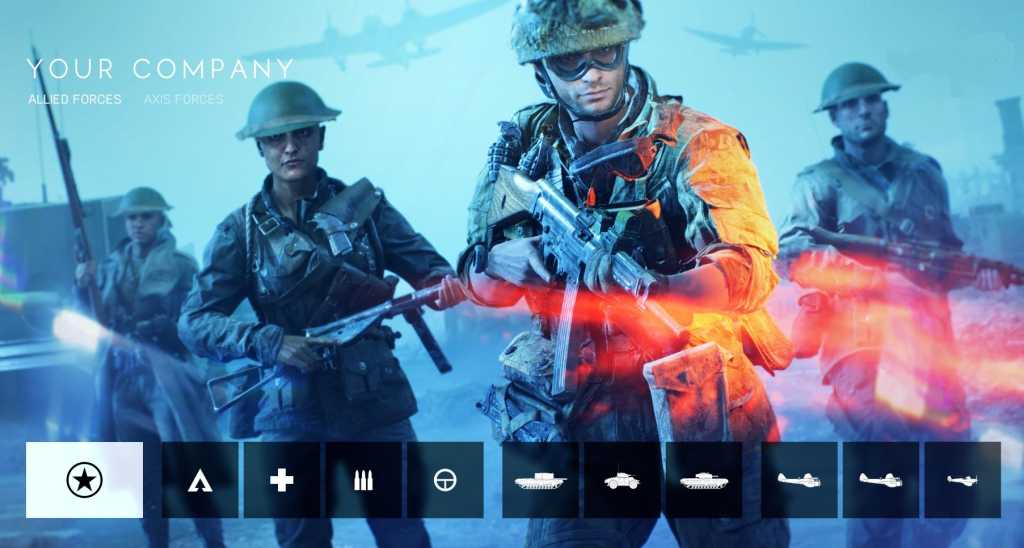 Battlefield 5 features a huge variety of weapons across its four infantry classes. From assault rifles and machine guns, to semi-automatic carbines and sub-machine guns there is a huge amount of choice for any play style.

However, all weapons are not made equal and we’ve been hard at work testing and investigating all of them to bring you the information on the best weapons in the game.

We’ve also got guides on how to spawn tanks and planes in Battlefield V, and how to customise your weapon loadout too.

The weapons you can wield in Battlefield V are dictated by the class you’re currently playing. Each class has access to certain styles of weapon that make them effective at different styles of game play and they are divided up as follows: 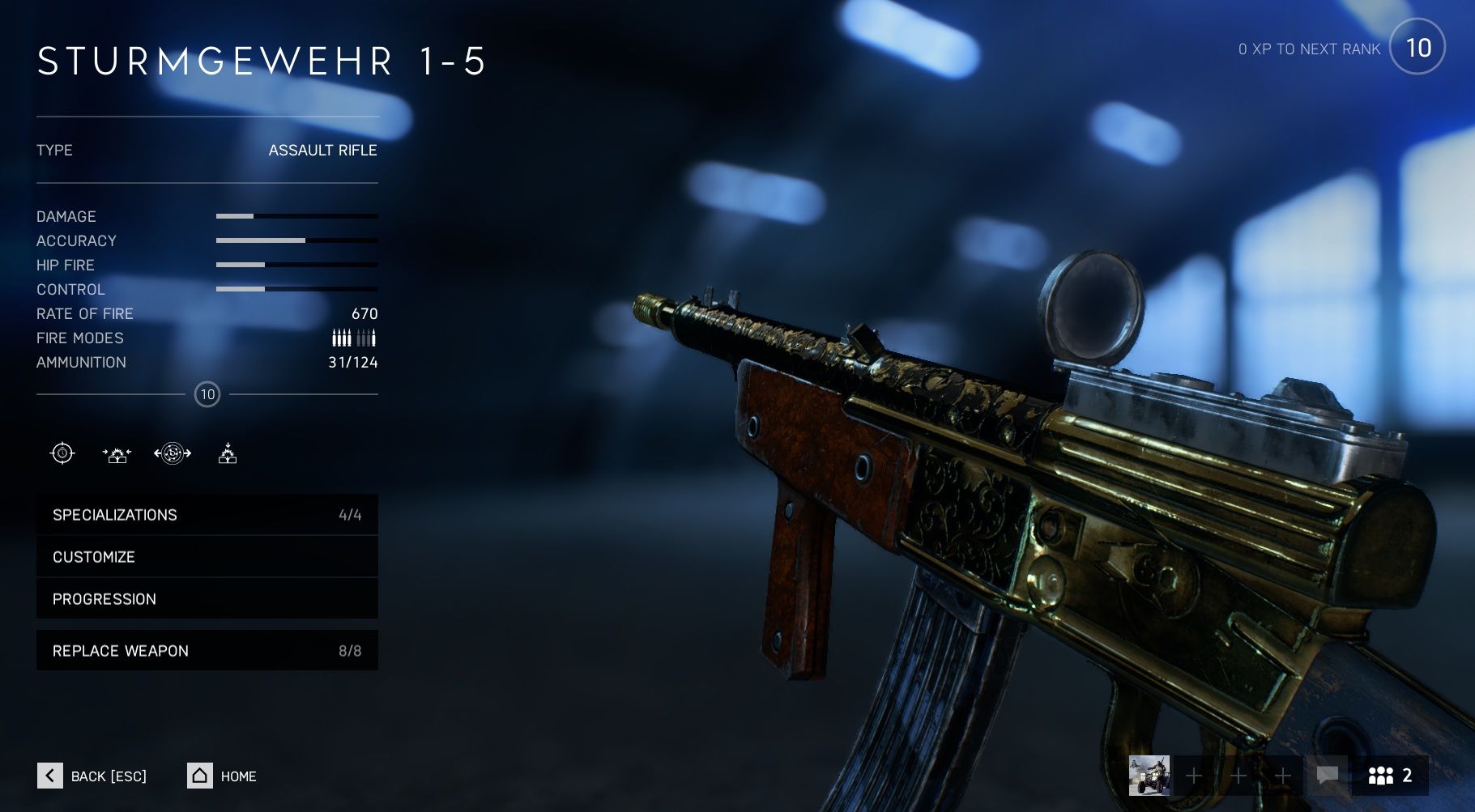 The Assault class is the backbone of any infantry push in Battlefield V, while also filling the anti-tank role at the same time.

Assault players excel in short to medium range combat and their weapons tend to be the most versatile as they can operate in very close quarters and out to reasonable distances fairly effectively. If you’re the type of player the favours running and gunning, then assault is the class for you.

We would recommend the Strumgewher 1-5 assault rifle as the best all-rounder, which is the weapon the class starts with. The STG 44 is more effective at longer rangers, but the slower fire rate can make it less effective up close. The M1907 is a lethally powerful assault rifle, but fires extremely fast with a lot of recoil – great for close range, but harder to control when firing at further targets.

The Strumgewher 1-5 is a great balance between both here and is the most versatile assault rifle, although the M1907 gets a special mention, as while it is hard to control it has a very fast TTK (time-to-kill).

For the semi-automatic weapons, the M1A1 Carbine stands out the most. Most effective when engaging targets with a 3x scope at medium range, this weapon can fire very rapidly with minimal recoil. The Gewehr 43 does the most damage per shot, but fires much slower – and the rank 20 Gewhr 1-5 is also a strong contender as it’s abillity to hip fire makes it nice and versatile. 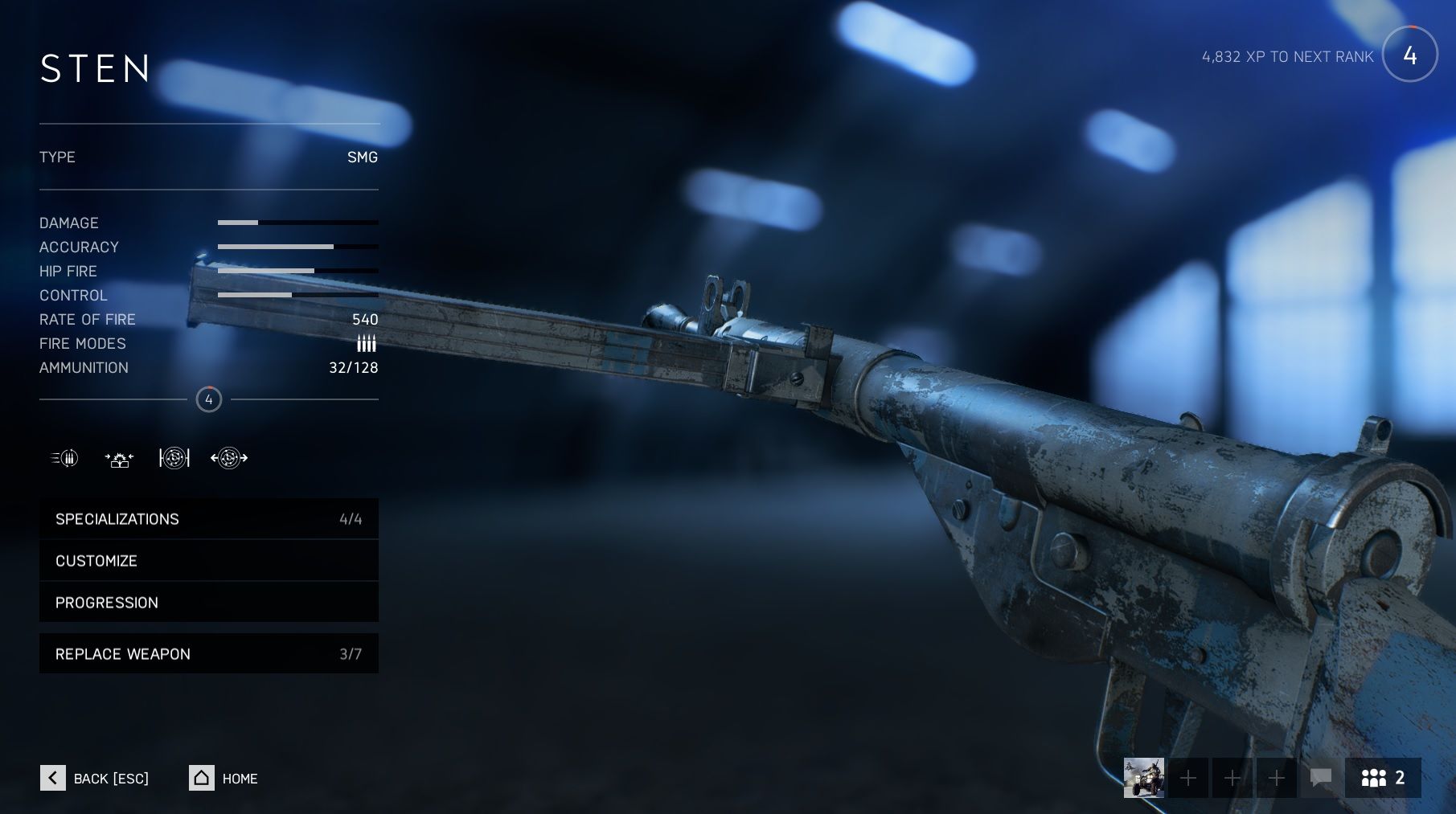 The Medic is responsible for keeping the rest of the squad alive. Smoke grenades are incredibly effective at hiding your advance from a tank or a nasty machine-gun nest, and being able to swiftly revive your squad usually makes the Medic the most effective team-mate and unsung hero.

However, despite its support focused role, don’t be fooled. The SMG’s the Medic carries are incredibly powerful at shorter ranges making them the kings of close-quarter combat.

When using the Medic weapons it’s important to remember not to engage Support or Assault classes at longer ranges, getting up close and personal where you can make use of your superior hip-fire and fire rate is essential.

The Sten is the gun the Medic class starts with and is a fantastic all rounder. A solid fire rate, great hip-fire and decent range make it nice and versatile.

The Thompson is the king of close range with a vicious fire rate and great hip-fire abillity, doubling down on what Medics are best at – getting in close and clearing out the enemy. 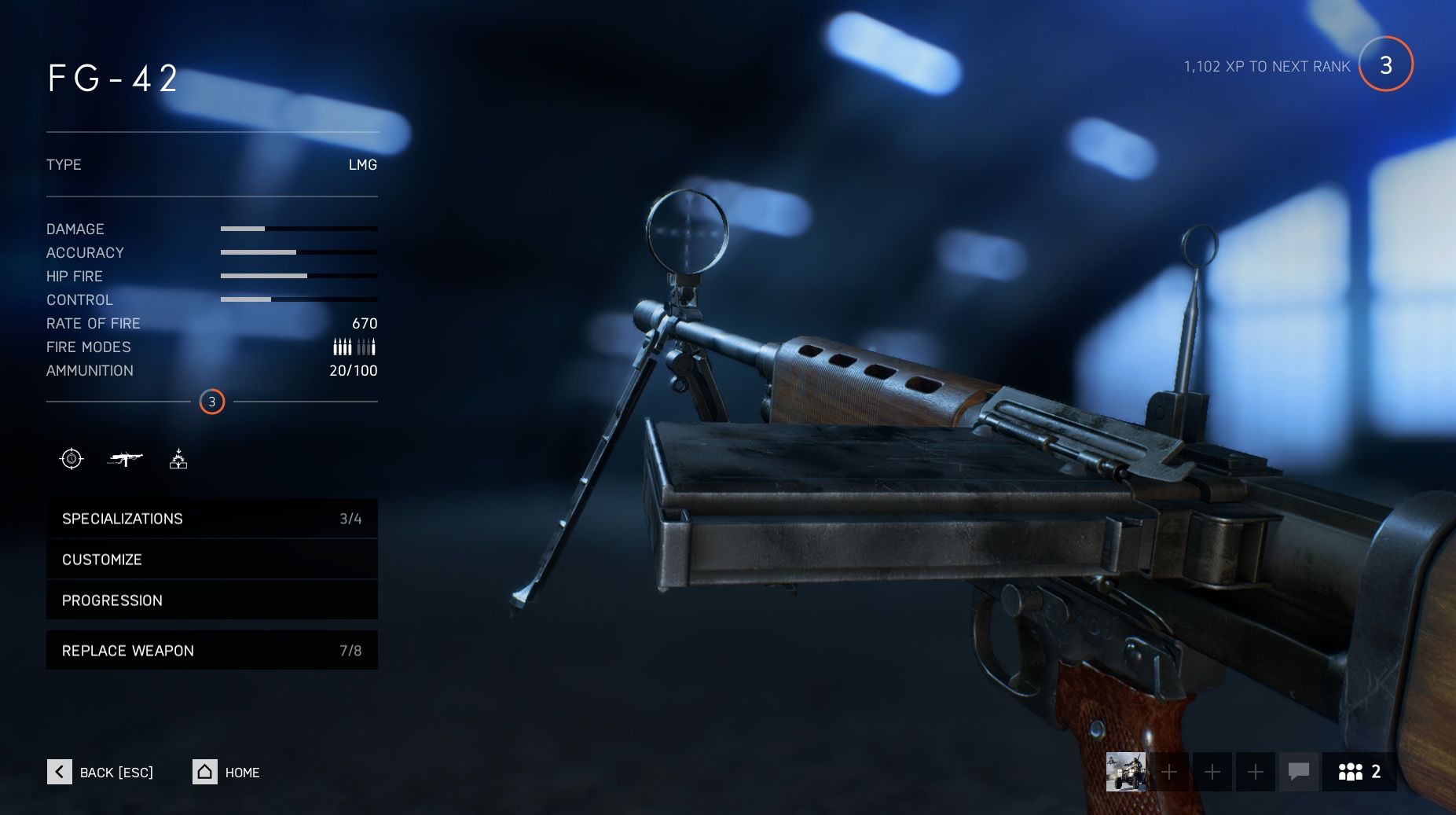 The Support class is a slightly deceptive name as they’re given access to the most devastating weapons in the game: machine guns. While also providing vital ammunition resupplies to you comrades, a well placed machine gunner can single-handedly stop an enemy advance with a hail of fire.

The support class excels at the medium range. While certain machine-guns are usable in closer quarters, they’re slower to wield and have very inaccurate hip-fire due to their weight. These weapons are best used when laying down or buy placing the bi-pod on a surface to make the weapon stable. This dramatically reduces the recoil to an almost undetectable level and allows the user to be incredibly accurate.

The KE7 is the most well rounded Machine-gun for the support class. Effective at closer ranges, and excelling when used at medium range too, this weapon is the most versatile that the class has to offer. Support to get access to Machine Guns that can ONLY be fired accurately when laying down or setup on a bi-pod. The MG34 and MG42 are lethal in these situations, with high damage rounds and extremely fast fire rates.

The Support also gets access to shotguns, the Drilling being incredibly effective. The double-barrelled shotgun has an incredibly effective range and will take just one shot to kill most infantry, allowing you to kill two people in the blink of an eye. However, missing is not recommended as it does take a while to reload and you only have two shots. 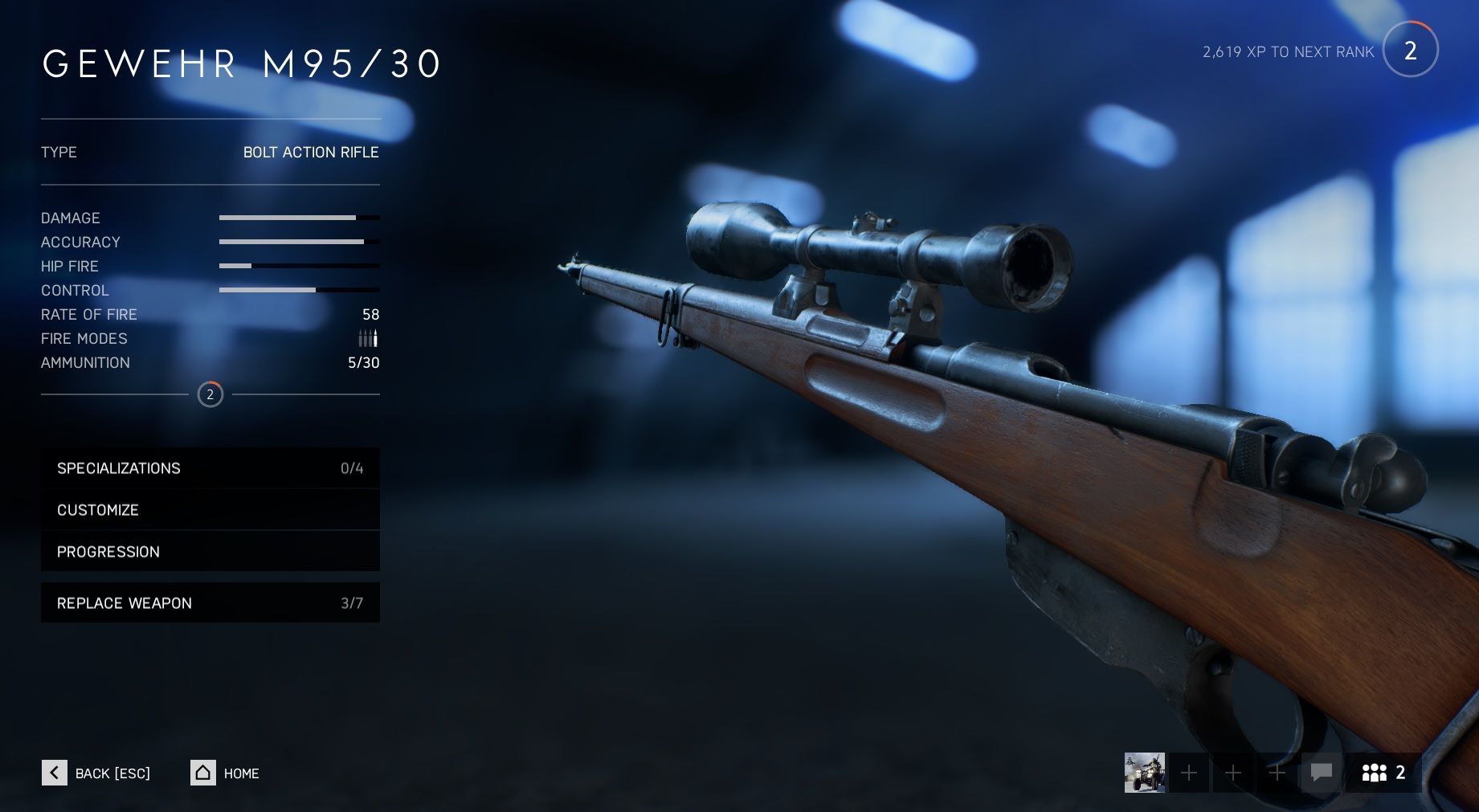 The Recon class gets access to semi-automatic and bolt-action rifles. Operating from the longest ranges is what this class is about, holding choke points and key areas, making the enemy think twice before pushing forward.

The Gewehr M95/30 offers the best option for people who love bolt-action rifles. It has a fantastic balance of control, accuracy and damage allowing the easiest time for longer range kills. The RSC is a semi-automatic rifle with 6 shots in the clip, which is better suited for medium range engagements allowing to to get off several shots in rapid succession with a fire rate of 180 rounds per minute.