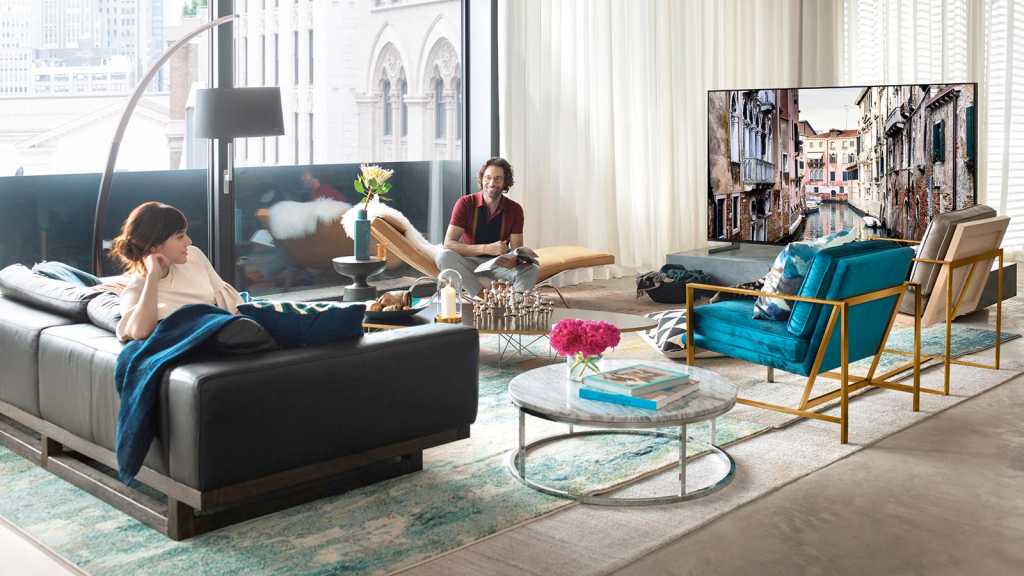 The evolution of TV displays continues at rapid pace. Only five years ago, the talk was still of Full HD 1920 x 1080 resolution displays, with LED backlighting. But then came the emergence of the OLED TVs promising the ultimate quality and, along with it, 4K TVs offering four times as many pixels than Full HD for sharper, more realistic images. However, as consumers are increasingly buying larger screen size TVs, the sharpness and details that 4K TVs provide are on the decline. After all, the same amount of pixels now has to cover a larger screen size. To address this issue, a new revolution is already on the horizon: 8K QLED.

QLED 8K TVs have a resolution of 7,680 x 4,320 pixels, four times more than 4K and 16 times more than Full HD. Given that some people are still holding off buying a 4K TV due to a perceived lack of content, it’s understandable that you’d think the same applies to QLED 8K TVs. However, the true benefit of QLED 8K TVs today is to make your current content look better on a bigger screen, due to the availability of a higher density of pixels.

Samsung uses cutting-edge ‘upscaling’ technology which uses built-in Artificial Intelligence to enhance the quality of any media to take full advantage of this much higher resolution. This means that you can watch old episodes of your favourite show and they’ll look better than ever. It also means you can continue to enjoy HD and 4K video and it will look even sharper than it does on a 4K TV.

Roughly 8,000 pixels are packed into each horizontal line of the screen and at this level of pixel density, even on a very large screen, the individual pixels making up the image become imperceptible to the human eye. Samsung’s new QLED 8K TVs have 33 million pixels in total, which adds not just detail but also depth and realism to content which generates a truly life-like image that you feel is more ‘real’.

It isn’t only extra pixels that help these latest QLED TVs to produce images which make objects and people on screen look as if they’re there in the room. Brightness is also key and the new QLED 8K range is significantly brighter than previous models, delivering up to 4,000 nits.

Even the best 4K TVs produce between 1,500 to 2,000 nits, but such a bright backlight won’t blind you. It’s there to allow for great HDR performance and also to ensure the picture faithfully reproduces colours even in direct sunlight.

With HDR video, again the aim is for more realistic looking video. A car driving towards you in the dark, for example, should have dazzling headlights even if the surroundings are deep black. Similarly, in nature documentaries, details should be precisely the right brightness and colours – especially grass and sky – must be spot on in order to make the picture more immersive.

The QLED 8K range handles this with ease as its brightness matches the standard that film and TV studios use for Blu-ray releases and the HDR10+ technology ensures that contrast is optimised for every scene to again faithfully represent the image as the filmmaker intended.

Resolution, colour and brightness needs to be controlled, and Samsung has developed a brand new processor which uses AI and machine learning to not only handle picture quality, but also sound.

Just as each scene is processed and optimised for contrast, colour and brightness, audio is analysed and enhanced so you hear everything.

The AI comes into play when upscaling lower-resolution video, such as HD TV and Blu-ray, intelligently adding detail and reducing noise so you see a better-quality, more realistic picture.

You don’t want a big TV to dominate your room when it’s off, but thanks to the QLED 8K TV Ambient Mode it can blend into the background.. almost literally. It can mimic the wallpaper behind it or display decorative art. If you prefer, you can tell it to display your photos or the news headlines and weather updates.

With so much content available on demand, it can be frustrating to search through thumbnails, and worse to use an on-screen keyboard to type. But thanks to the mic-enabled remote and built-in Voice assistant you don’t have to. Simply say what you’re looking for and it will be displayed on screen. There’s also a Smart Universal Guide which makes it simpler to see content you might actually want to watch through personalised recommendations.

Cable clutter is kept to an absolute minimum because QLED 8K TVs come with a One Connect box which attaches to the TV with a Near Invisible Cable which also provides power. The box houses all of the inputs and outputs and can be placed up to 15 metres from the TV itself, so all your set top boxes – including games consoles – can be hidden out of sight.