This fight will see the conclusion of a bitter rivalry between the two men, a rivalry that exploded at UFC 223 when Conor McGregor attacked a bus that Khabib was inside with a large gang of accomplices. This was in apparent in reply for Khabib slapping Artem Lobov, a teammate of Conor McGregor’s, over some words that were allegedly uttered. 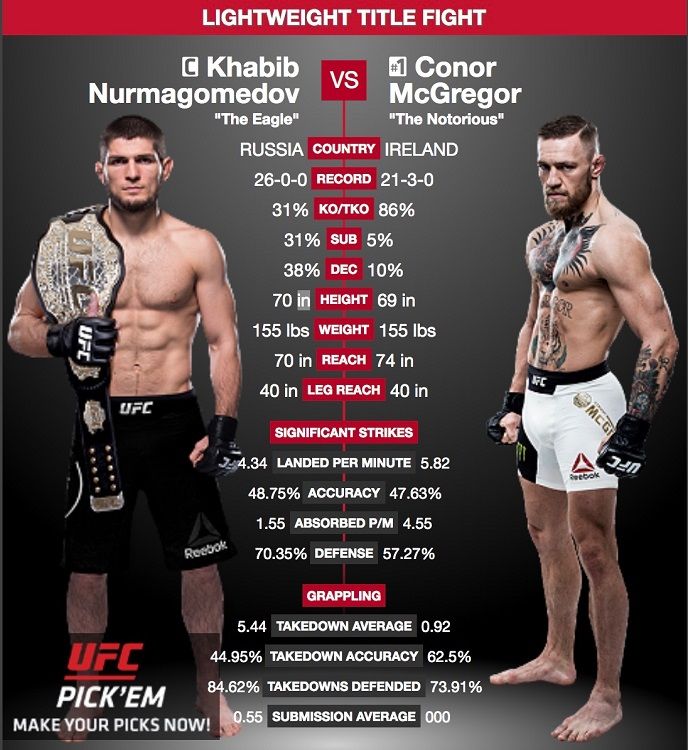 This is all sounding a little bit like a WWE storyline, but the fights are very real – regardless of the events that preceded the fight, Conor McGregor is the first UFC fighter in history to hold two belts in two separate weight divisions and Khabib is on a 26 fight undefeated winning streak. This fight will be an incredible display of emotion and skill, as two of the greatest lightweight fighters of our time square off.

The card will also feature a fight between Tony Ferguson and Anthony Pettis which will be an interesting indication of Ferguson’s form after he returns from injury. Ferguson is the other fierce contender for the lightweight title who, due to various unforeseen circumstances, hasn’t had a real chance at the belt. Many think this is long overdue, as one of the most dynamic fighters on the UFC roster he is always a joy to watch, and seeing him take on Pettis this weekend will be a real treat too.

What time does UFC 229: Conor McGregor vs Khabib Nurmagomedov start?

The McGregor vs Nurmagomedov fight will take place at roughly 3 am BST (7 pm east / 10 pm west) although this may vary depending on the length of the previous fights.

UFC 229 is being held at the T-Mobile Arena in Las Vegas, Nevada.

How can I watch UFC 229: McGregor vs Nurmagomedov?

If you’re in the UK you’ll be able to watch the full event live on BT Sport.

You’ll be able to purchase the UFC Fight Pass for the event here.

Do keep in mind that you’ll be able to get a cheaper deal if you use a VPN to alter your location to a country in South America, or the Philippines, then purchase the package through your browser via the altered location.

Take a look at our guide on how to use a VPN here, as well as our picks of the best VPN choices this month.