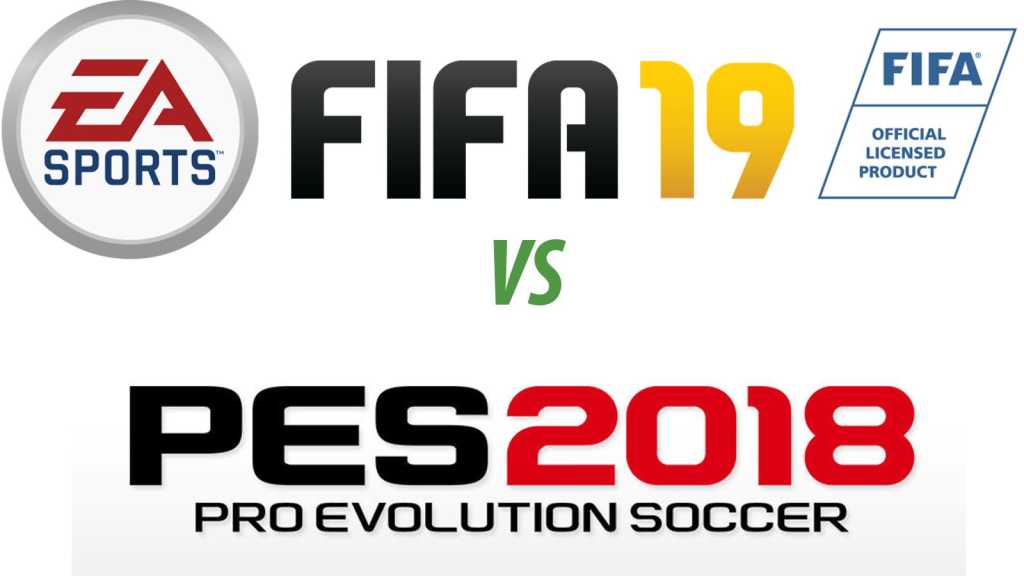 In the football gaming world only two names remain. Do you prefer FIFA or Pro Evolution Soccer (‘PES’ for short)?

FIFA has grown into a well-oiled money-making franchise where PES has become second fiddle – at least in terms of sales. But are the two soccer sims really that different?

Here, we compare FIFA 19 to PES 2019 to see what the differences are and help you decide which game you should buy. For more information on this year’s FIFA entry, take a look at our dedicated FIFA 19 review.

There’s also a Nintendo Switch version, but it’s not the full-fat one due to the Switch’s hardware constraints.

While they are similarly priced, FIFA 19 and PES 2019 are very different when it comes to licensing. Basically, FIFA wins this comparison.

EA Sports and FIFA have rights to practically every league in world football – this means team names, kits, stadia and player likenesses are all on FIFA 19. It’s branded well, just like the football you see on TV and at the matches.

Konami has less luck. It means that, for example you can’t play as Manchester United. On PES 2019, it’s Man Red. And you won’t have the official kits.

PES has Barcelona, Liverpool, Inter Milan and a few other teams licensed, but mostly it has to settle for unofficial kits and team names. Want to play an El Clasico? That’ll be Barcelona vs MD White. Yuck.

While you might not care, there’s no doubt that is more fun to have the real names, kits and players represented on FIFA 19.

This year PES has even lost its exclusive Champions League and Europa League branding rights. That’s a FIFA 19 exclusive now.

Licensing aside, there’s a fiercer debate to be had about which game has the better gameplay. This is of course subjective, and different people will go for different things. But this is what we think.

FIFA 19 is the more streamlined, accessible football game. It’s not easier per se, but it’s easier to get into and feel like you are improving, with a gentler learning curve.

There are intricate controls in there, but you don’t need to master them all in order to win difficult matches. FIFA 19 rewards silky stepovers and tactical flourishes, but it doesn’t demand you know them all during the first match.

By comparison PES 2019’s gameplay is truer to life – i.e., it’s a bit harder to master. The attention to detail is greater too, with passes in particular very polished. A player will play a different style of pass depending on the set up of the surrounding players and adds a surprising feeling of variety and lifelike feel to gameplay.

This isn’t to say FIFA 19 is unrealistic, it’s just a bit more box office. Players will often try to score overhead kicks from corners even when it’s not the best move. PES 2019 is a bit more grounded in realism.

FIFA 19 has improved passing too, though. Ground passes in particular are zippier, making the game feel faster than before. It’s a bit easier to dribble and make passes on FIFA, and with a bit of practice all players are actually quite good, no matter their player ratings.

On PES the gap between player ability is a bit greater and there’s also a more realistic feel to the ball. It doesn’t always do what you want depending on the player ability and weather, and adds a bit of realistic variety to the game.

But where PES is great on the pitch, presentation suffers. It’s not everything, but it makes a difference. Crowds are pretty bland and lifeless, and the commentary is terrible.

FIFA’s crowds are far more advanced rather than being a block of identical people in the same shirt. This added to the real-life stadia are a better illusion of a real match.

The Master League in PES 2019 is decent, but it’s a bit too easy sometimes to get world class players for quite little money. It goes against PES’s usual default of being harder than FIFA.

And while PES 2019’s online modes are as good as ever, FIFA 19’s online community is larger and has broader appeal. FIFA’s live player updates mean you can play online with the real-life current first team of any team in the world. For many fans of the modern game, it’s a no brainer against the unlicensed realm of PES 2019 – even if the gameplay is less realistic.

FIFA 19 has added some great multiplayer options for offline play too. Modes like survival (lose a player every time you score) and house rules (no fouls, no offsides) inject a fresh feel into multiplayer where often it’s more boring than going online.

FIFA Ultimate Team is also not for everyone, but those who want to invest time (and money) into building a fantasy team and taking on the best in the world online have the option.

Finally, it might not be everyone’s cup of tea but FIFA 19 has The Journey for the third year in a row, it’s single player story mode. You flit between Alex Hunter, Kim Hunter and Danny Williams as you progress through careers, training sessions and important matches, complete with cut scenes. No such mode exits on PES 2019.

Unfortunately, PES 2019 can’t hide behind the few teams it has licensed and put on the box and throughout its menus – FIFA 19 is simply a more rounded experience.

PES 2019 offers more intricate and in some way more rewarding gameplay but FIFA 19 gives you a better representation of the modern game with all the glitz, glamour, kits and team names. This is often the main reason people buy FIFA, and it now even has Champions League rights.

FIFA 19 also has a bigger online community and better one player options, plus some excellent new offline multiplayer modes. PES 2019 is fun, and a great game, but if you have £50/$50 to spend on a football game, we recommend FIFA 19.