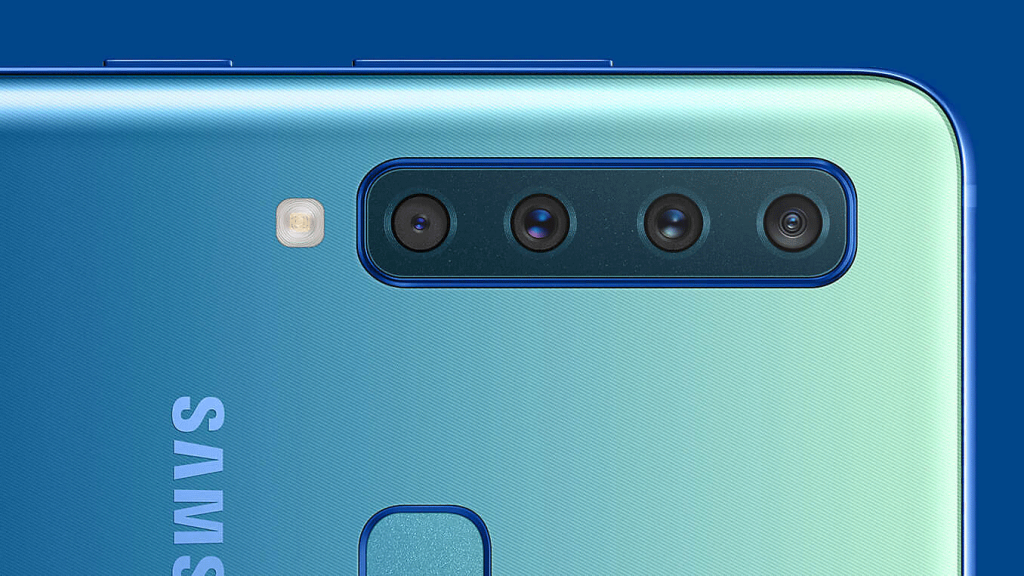 Samsung has announced its new Galaxy A9 smartphone, which features the world’s first quad-camera. Here’s everything you need to know about this innovative device and when you’ll be able to get hold of one.

To see our first-impressions also take a look at our Samsung Galaxy A9 hands-on review.

At the time of writing there’s no specific release date for the A9, but Samsung states that it will be available mid-November. The UK price is set at £549 for the solitary 128GB model, but how much US customers will have to pay is still to be revealed.

The price is a step up from the Galaxy A8, which was around £100 cheaper, but the new features could make this easily justifiable.

With a 6.3in Full HD+ Super AMOLED display dominating the front panel, the Galaxy A9 is a large device that measures 162.5x77x7.8mm and weighs in at 183g. The glass back does come with gently curved edges to make it more comfortable in the hand, but this should be thought of primarily as a two-handed device. 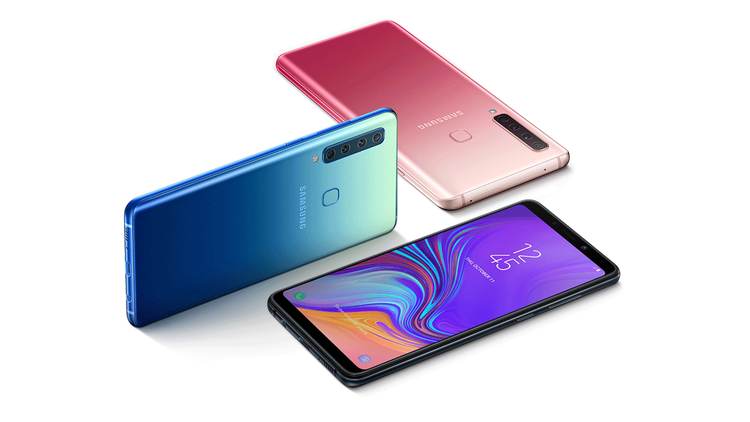 An all-glass body is standard fare for 2018, and the Galaxy A9 is available in three attractive colours which benefit from Samsung’s advanced anodising process. These are Caviar Black, Lemonade Blue, and Bubblegum Pink.

The rear is home to a fingerprint sensor and of course that all-important quad-camera unit, more of which we’ll explore below. A single speaker adorns the bottom edge, joined by a USB-C port and something of a rarity these days in a 3.5mm headphone jack.

The 3,800mAh battery supports fast charging, but sadly not wireless. There’s also no confirmation as yet on whether the A9 is waterproof

Before we get onto the cameras there a few other details worth mentioning. The Galaxy A9 comes with 128GB of storage as standard, which is excellent for a mid-range device. This can be expanded by a further 512GB via the microSD slot, making a grand total of 640GB! 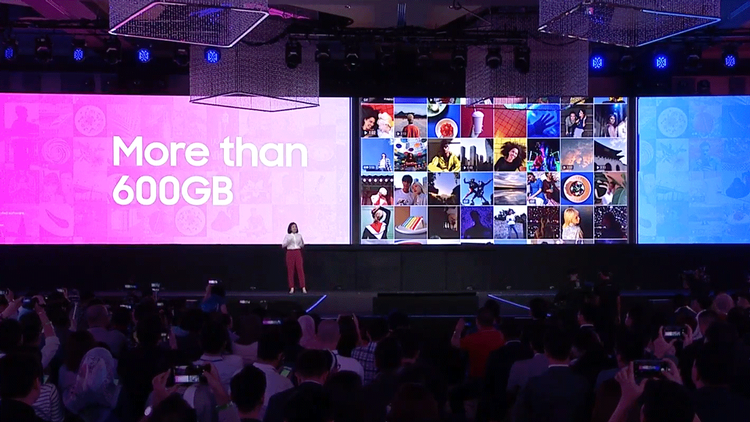 A Qualcomm Snapdragon 660 Octa-core processor is the brains inside the A9, which is a perfectly decent chip. Depending on your region, this will be accompanied by either 6GB or 8GB of RAM.

Here’s a breakdown of the full technical specification for the Samsung Galaxy A9;

Of course, the main selling point of the Galaxy A9 is its innovative camera configuration. Samsung has included four different styles of optics, which provides an enviable scope for smartphone photographers. 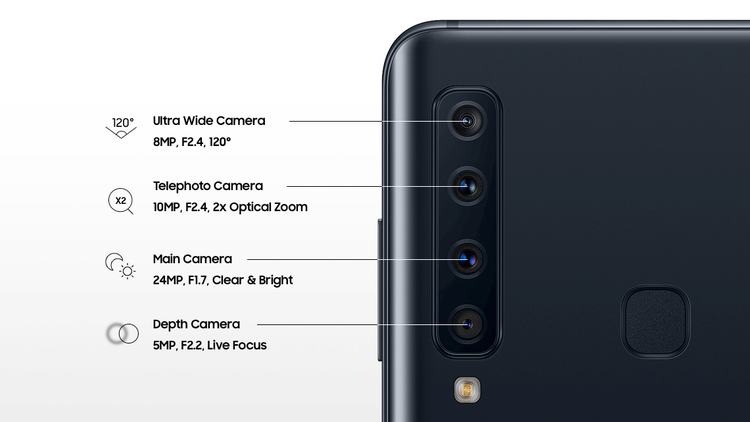 The primary camera is a 24MP f/1.7 lens that Samsung says uses software to automatically merge 4 pixels as light drops. This is to ‘soak in the light and create brighter images’.

There’s also a helpful Flaw Detection program that analyses shots and warns you immediately if things are out of focus or if someone blinked while you were taking the shot.

Next up there’s the 10MP f/2.4 Ultra-Wide camera that has a 120 degree viewing angle that’s meant to be the same as the human eye. This means you can capture a much large area than with the standard 77 degrees used by most lenses. At the launch event Samsung revealed some panorama shots taken with the Ultra-Wide camera and they did look very impressive.

A 5MP f/2.2 Depth-camera is there to enable bokeh effects (where the background is blurred out) and can be manually adjusted either before or after you take the shot. 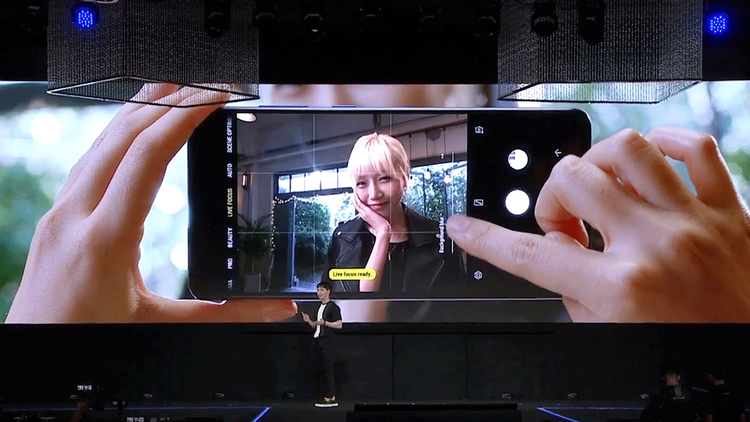 Finally there’s an 8MP telephoto lens with 2x optical zoom for making those distant subjects come a little closer without losing quality in the image.

While all of this does seem like a fantastic package, especially in this price band, we’ll have to put the lenses through our rigorous testing process before we can know how they behave in real-life. Keep an eye out for our full review to see how they do.

Oh, and we should mention the 24MP f/2.0 front camera that’s also included and doubles as a facial unlock security feature. By our count that makes five.

The Galaxy A9 will arrive with Android 8.0 Oreo as standard, adorned as always with the Samsung Experience skin. To be fair, this once annoying overlay has become a much nicer environment in recent iterations, shedding its garish colours and insane amount of options for something more refined.

Samsung has promised an Android 9 Pie update for the Galaxy A9, but there’s no details of when this might arrive.

Samsung also confirmed that its previously announced Galaxy A7 would now be available to order in select Asian and European markets. The A7 has a release date of 11 October and will cost £309 in the UK for the 64GB model. You can pre-order from Samsung, or check with the major carriers who are all likely to carry the device.

It’s unclear when the US models will be available, or the pricing, but we expect both to be announced very soon.

The Galaxy A7 is available in these four colours: 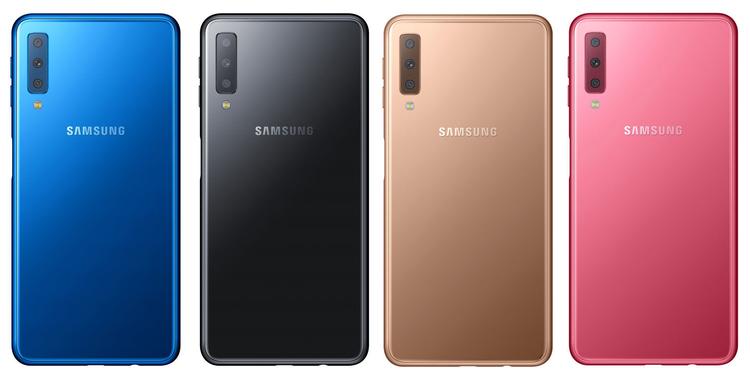 Cameras, though, are one of the main reasons to buy the A7. The main one has a 24Mp sensor and along with the ‘depth lens’ allows you to control depth of field. Basically, it’s a workaround for having a fixed aperture and lets you adjust the blurriness (bokeh) of the background.

The third lens is a 120° wide-angle attached to an 8Mp sensor. Around the front is another 24Mp camera for selfies. It has an adjustable flash and has ‘Selfie Focus’ which is a way to get blurry backgrounds with just one front camera. Selfies can also be shot with Pro Lighting Mode, and there’s support for AR emoji. 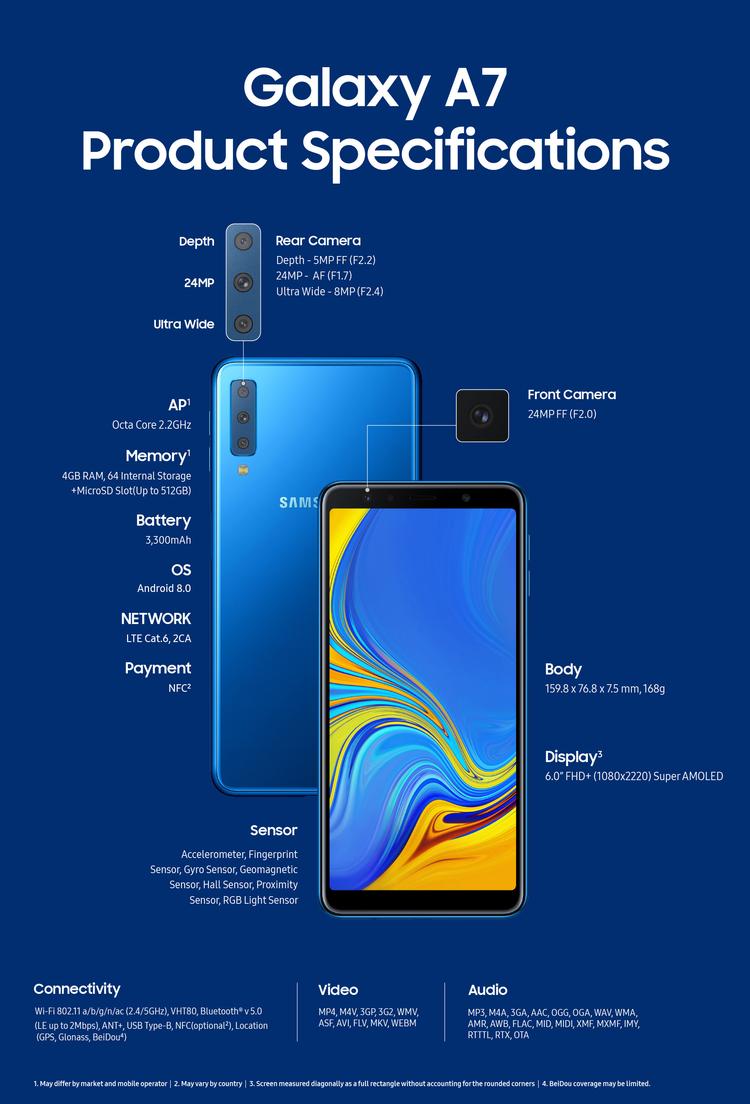