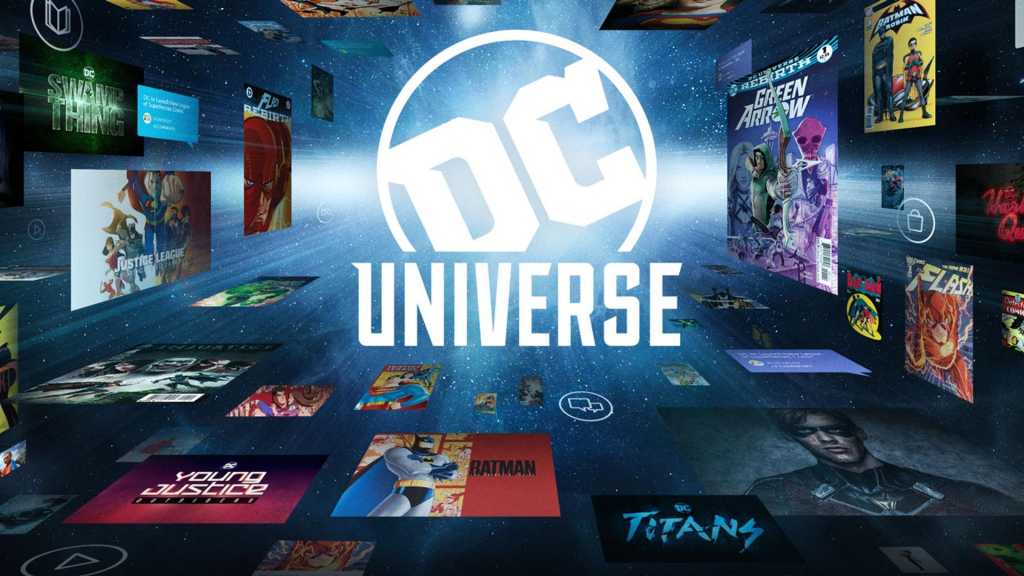 DC Universe is a streaming service dedicated entirely to the DC content. On the platform you can watch new and exclusive TV shows, old shows and movies, and read digital comics books.

The service launched in the US in September 2018, but unfortunately for the rest of the world it’s so far US-only – which is a bit of a problem if you’re hoping to watch the service’s exclusive shows. The first original show, Titans, came to Netflix outside the US, but there’s usually a large gap between when it first airs and when its syndicated, and we don’t know for sure which other shows will make it to Netflix.

Luckily there is a way round the company’s region-locking, so here’s how to watch Titans, Doom Patrol, and other DC Universe shows and films from anywhere in the world.

What is DC Universe?

DC Universe is essentially a rival to the likes of Netflix and Amazon Prime Video, but one that is exclusively limited to content involving DC’s roster of comic book characters: Batman, Superman, Wonder Woman, and the like.

That obviously means it has a narrower range of genres than most other streaming services, but DC hopes to make up for it by leaning heavily into dedicated content for its serious fans. That means an exhaustive back catalogue of animated TV shows and films, classic movies including from the original Superman films to Nolan’s Dark Knight trilogy, and newer shows that you won’t be able to watch anywhere else – like the aforementioned Titans.

There’s also more on hand than just stuff to watch. DC is throwing in access to a selection from its back catalogue of digital comics, along with exclusive merchandise offers, premium rewards and offers, and a community section that allows you to reach out to DC fans and creators alike.

All of that will cost you $7.99 per month – remember, this is US-only for now – with an annual subscription available for $74.99. However, you do get a seven-day free trial.

That’s a little higher than we maybe expected, making it comparable in price to Netflix and Amazon Prime – despite their broader catalogues – and means you’ll probably have to be a pretty serious DC fan to consider a long-term subscription.

Unfortunately, DC Universe will eventually no longer be the home of original shows. The Hollywood Reporter has reported that all DC Universe series like Titans, Doom Patrol, and Harley Quinn will all eventually move to HBO Max due to budget cuts within Warner Bros.

This news was then followed up with an announcement that DC Universe will rebrand to DC Universe Infinite – and will be a comic-only streaming service ( via io9). This change will happen on 21 January 2020.

HBO Max costs $14.99 per month and is also exclusive to the US. However, there is still a way to watch HBO Max from the UK.

How to watch from outside the US

While DC Universe has launched in the US, it’s not officially available anywhere else as of yet, presumably thanks to the complexities of international licensing. While we’re sure the company is planning to launch the service internationally (perhaps with a slightly different catalogue in some regions) there have been no official plans as of yet.

Visit the DC Universe website from outside the US and you’ll see the message: ‘Sorry, this service is only available in the US. We’ll announce when it is available in your region.’ That’s a problem for fans in the UK or elsewhere that want to use the service though, as there’s no official way to access it outside the US, even if you’re a US user on holiday who already has an account. Luckily, it should be possible – you’ll just need a VPN to pull it off.

We’ve reviewed loads of VPNs, and our usual recommendation is NordVPN, though take a look at our guide to the best VPNs for streaming video if you want to see some other options. You just need to sign up for an account, install the software, and set it to connect you to a US server. Once you do that you can visit the DC Universe website and it will believe you’re based in the US, allowing you to sign up – though you may need a spoof US address to get through the sign-up process.

For those based outside of the US, be sure to choose the option to pay via PayPal (your UK account will be fine for this). If you want to sign up with a credit/debit card, then you’ll need a payment card that’s tied to a US bank account, or you’ll be denied access. Of course this won’t be a problem if you’re a US user who has an account and just wants to watch while in another country – if that’s you, a VPN is all you need. 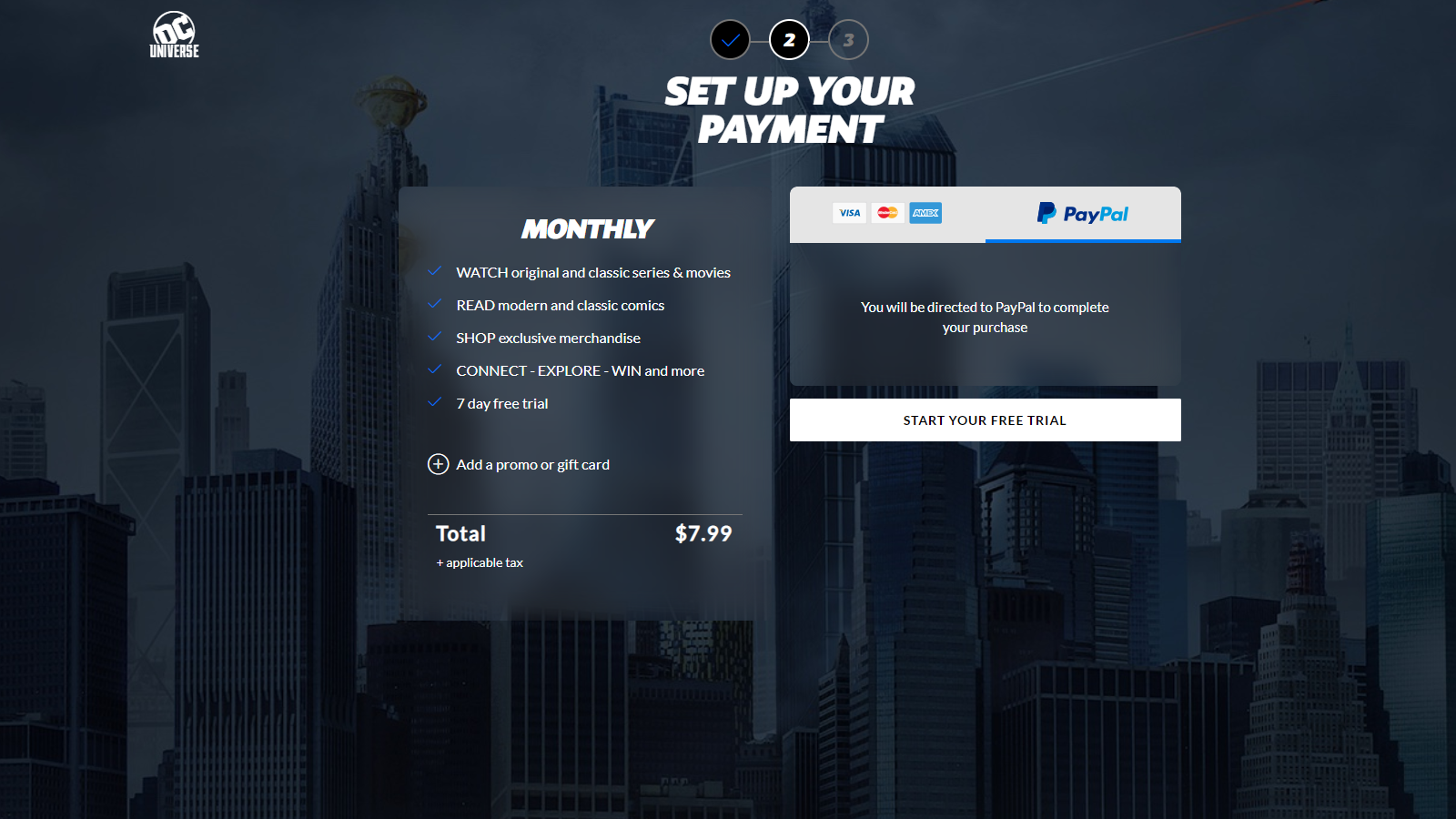 Remember that you’ll need to keep using the VPN every time that you want to use the service, and will need to make sure that you have it installed on whichever device you use to stream – so if you want to watch from the iOS app, you’ll need to install your chosen VPN on your iPad or iPhone too.

Finally, it’s worth noting that as with any attempt to get around geo-locking for a streaming service, this will be against DC Universe’s terms and conditions. It’s not illegal on your part, but the company would have the right to revoke your account, or could simply block your access if you get caught, so proceed with caution.

What are the exclusive shows?

If you’re going to pay $7.99 plus the cost of a VPN, you’ll want to make sure you’re getting your money’s worth. And while DC Universe has some great stuff from DC’s back catalogue of TV shows, movies, and comics, it’s probably the new exclusives that are the biggest draw, as those are the things that you absolutely need DC Universe in order to watch.

The first big show to launch on the service was Titans, a grim ‘n’ gritty take on the Teen Titans team, led by Batman sidekick Robin. That launched on 12 October, with new episodes arriving weekly for 12 weeks – rather than the all-at-once binge setup favoured by Netflix and Amazon.

Netflix released Titans globally outside the US and China, but there was a delay before it arrived in other regions. We also don’t yet know if Netflix will have the rights to other DC Universe content or not.

Swamp Thing aired a single season on the service before cancellation, which isn’t especially promising either, but Doom Patrol is confirmed for a season two – though it’ll be a co-production with HBO Max, and episodes will arrive on both streaming platforms simultaneously.

There’s also Young Justice: Outsiders, Stargirl and Harley Quinn. These are forming a new shared universe, with some characters from the later shows getting introduced during Titans and Doom Patrol.