There are a lot of big superhero movies this year, but one of the strangest is Venom: not only does it take a classic comic villain as its (anti)hero, but it’s also Sony’s first movie set in the Spider-Man universe that won’t actually feature Spider-Man.

We’ve rounded up everything we know about the film, so read on to find out the latest and watch the film’s trailers.

When is the Venom Blu-ray and DVD release date?

Venom is no longer in cinemas, but you might be able to watch it at home. The film is out now in the US in both  digital editions and  Blu-ray and DVD.

In the UK the film is now out in both  digital versions and  Blu-ray. There’s also a very extravagant £69.99 Funko Pop disc release, if you’re that way inclined.

What we do have is Sony’s ludicrous ‘rom-com’ trailer for the Blu-ray, which pitches Venom as the tale of two star-crossed lovers:

We also know what special features you can expect from the disc editions of the film – though bear in mind that these can vary between formats and regions, so double-check whichever version you buy!

• Venom Mode: When selecting this mode the film will engage informative pop-ups throughout the film to provide insight on the movie’s relationship to the comics, and to reveal hidden references that even a seasoned Venom-fan may have missed! • Deleted & Extended Scenes: These deleted and extended scenes will give fans even more of the Venom action they loved in theaters! • Ride to Hospital – Eddie and Venom take a ride to the hospital. • Car Alarm – Let’s just say that Venom is not fond of car alarms. • San Quentin – Extended post-credits scene at San Quentin. • From Symbiote to Screen: A mini documentary about the history of Venom in comics and his journey to the big screen. • Interviews with Avi Arad, Matt Tolmach, Ruben Fleischer, Oliver Scholl, and Director and Comic Fanboy Kevin Smith. • The Lethal Protector in Action: Go behind the scenes with the production crew and learn the secrets behind the awesome Motorcycle stunts, wire stunts, and drones. • Venom Vision: A look at how Ruben Fleischer came to the project, gathered his team, and made Venom a reality. Utilizes interviews from cast, crew, and producers as well as Fleischer himself. • Designing Venom: Designing and creating Venom meant a huge challenge for VFX artists; follow the amazing journey. • Symbiote Secrets: Blink and you may have missed it! Enjoy the hidden references throughout the film. • 8 Select Scenes Pre-Vis sequences: See the progression of the visual effects, storyboards and fight chorography compared to the finished film. • “Venom” by Eminem – Music Video • “Sunflower” by Post Malone, Swae Lee (From Spider-Man: Into the Spider-Verse) • Spider-Man: Into the Spider-Verse Sneak Peek: Meanwhile in another universe…

Sony has released one teaser and two full trailers for Venom, each revealing a little more than the last about what to expect from the film. First up, here’s the teaser, but we’re going to warn you in advance: it’s a real tease of a teaser, and doesn’t actually feature any, y’know, Venom.

Thankfully the first full trailer gave us a bit more of the good stuff, showing off a few of Venom’s powers and our first look at the full… suit? Costume? Symbiote? Whatever it is.

And finally here’s trailer two, which shows a lot more of the full Venom look, along with a couple of other symbiotes that Venom is going to end up fighting over the course of the film:

Right now we have three official western posters for Venom, along with one unsurprisingly rad option from Japan. Check them all out in the slideshow here: 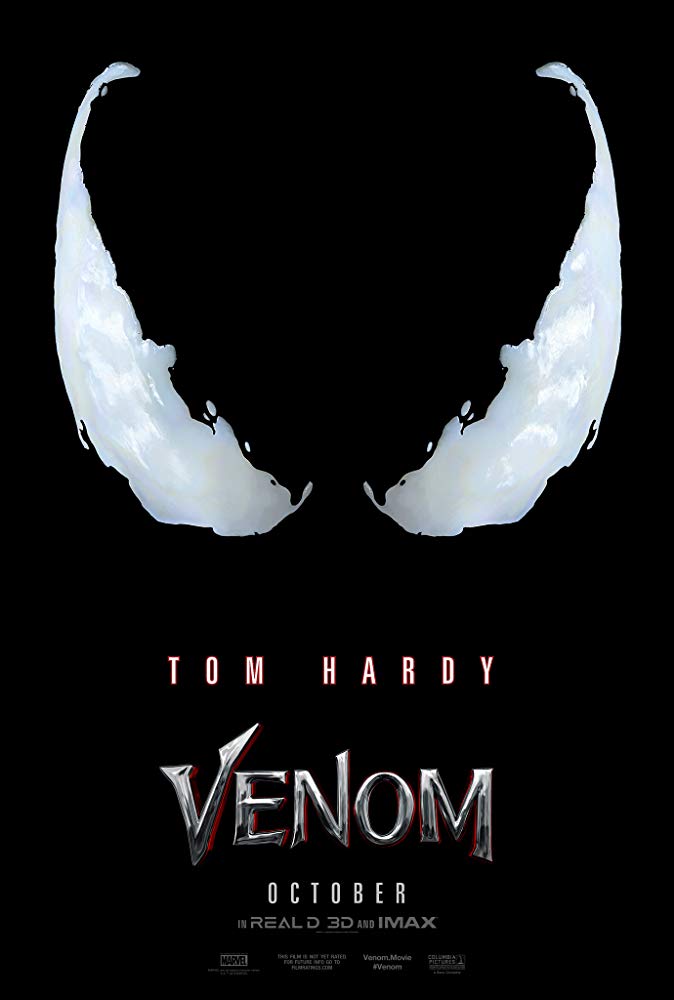 There aren’t many official stills from the movie, but there are some decent quality shots from the latest trailer which give you a good look at some of the biggest moments in the film: 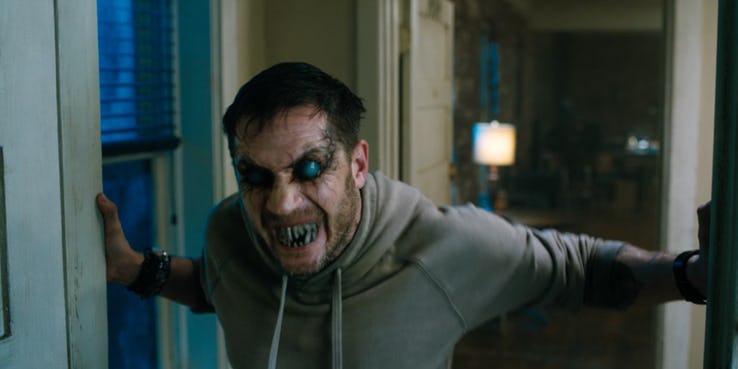 In case you haven’t guessed already, the star of the show here is Tom Hardy, who plays Eddie Brock, a journalist who is accidentally exposed to an aggressive alien symbiote which turns him into the ultra-violent Venom.

Hardy is a reassuringly capable actor, and he’s backed by an equally strong supporting cast. Michelle Williams is Anne Weying, the requisite love interest, while The Night Of’s Riz Ahmed will play Cartlon Drake, the villain of the piece, backed up by Michelle Lee as another symbiotic baddie.

Woody Harrelson is also appearing in what’s reportedly a small part – though read on below for our speculation on exactly who he’s playing.

Venom is directed by Ruben Fleischer, who you probably best know for Zombieland (and it’s upcoming sequel), though he’s also directed 30 Minutes or Less and Gangster Squad, along with a lot of TV work.

As for the script, that’s credited to four writers: Scott Rosenberg, Jeff Pinkner, Kelly Marcel, and Will Beall, who have a pretty diverse set of writing credits between them, including a few other superhero movies.

Between the three trailers and our knowledge Venom (and Spider-Man) lore we can glean a fair bit about what to expect. It looks like as per usual, the Venom symbiote is going to be discovered out in space and brought to Earth – in this case by Riz Ahmed’s Dr. Drake and his Life Foundation.

He uses the symbiote to experiment on people, trying to create the next step in human evolution, and Hardy’s Eddie Brock – an investigative journalist – is going to get caught up in it all when he pushes his investigation a little too far. Cue horrible experiments, gruesome superpowers, and a fight against Drake.

From the most recent trailer we can tell that Venom won’t be the only symbiote in town – he needs someone to fight after all. Not only is Drake going to become the giant symbiote Riot, but Michelle Lee’s character also looks to get some powers, likely as the comic’s Scream.

Thanks to Woody Harrelson teasing that he has a small role but will definitely be back for the (potential) sequel, it’s fairly likely that he’s playing the serial killer Cletus Kasady, and will return in the possible Venom 2 as the fearsome Carnage, the closest thing Venom has to an arch-nemesis other than Spider-Man.

Speaking of, we’re not expecting Spidey himself to make any sort of appearance here. Although the Venom movie is being produced by Sony, which has the rights to Spider-Man, the deal it made with Marvel to include Tom Holland’s Spider-Man in the main Marvel movies probably means that he can’t appear here. No doubt that’s part of why Venom has been relocated to San Francisco – conveniently far enough away to explain why Spider-Man isn’t here in case the company finds a way to bring him back in for future movies.

It sounds like that’s the plan, too. Reportedly Sony is very keen on keeping the door open for a Spidey sequel – so much so that they’ve kept Venom to a PG-13 rating in the US (the rough equivalent of a UK 12A), despite the recent success of R-rated comic book films like Logan and Deadpool, purely to keep the option of pitting Venom against Spider-Man down the line.

Director Ruben Fleischer says that was always the plan though. “I don’t feel like we compromise much,” Fleischer told  Polygon of the lower rating adding that there’d never been any indication the film was aiming for an R. “I’m not sure why [people thought that], other than maybe just a bloodthirst for Venom.”

He compared Venom to The Dark Knight, a PG-13 film that nonetheless maintained a dark, violent tone by shooting cleverly to work around MPAA guidelines, something he’s aimed to do by filming the most violent scenes in several different ways. That’s all with the aim of reaching as many Venom fans as possible.

“We didn’t want to make a movie that excluded any fans,” he said. “Venom fans actually are of all ages, and so we wanted to be inclusive to all the fans that were excited about the movie.”