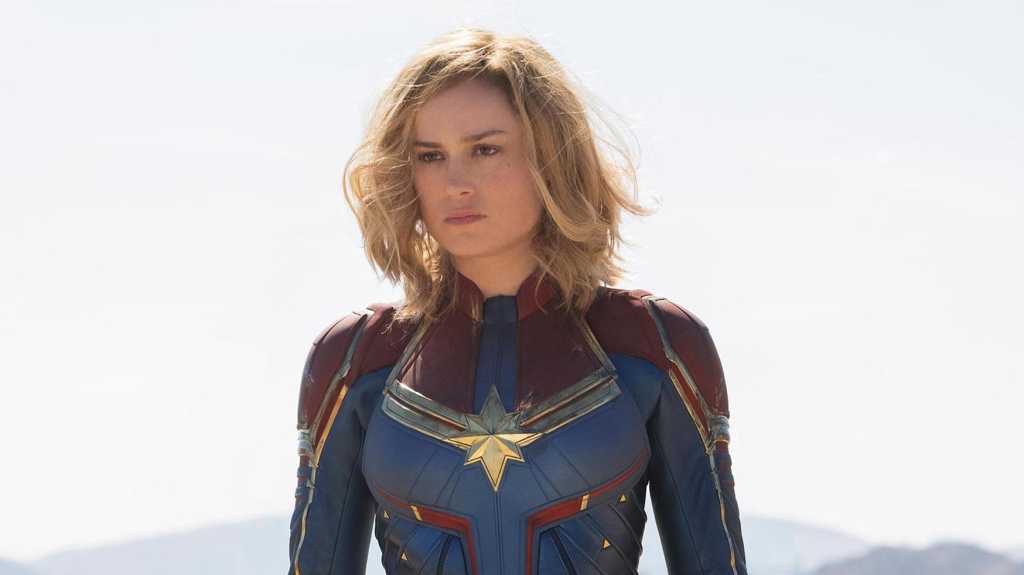 Captain Marvel is one of the most anticipated films of 2019, and for good reason. Not only is it the next Marvel movie, it’s also the one heavily teased by the Infinity War post-credit scene, the final film before Avengers: Endgame, and the first Marvel solo movie to boast a female lead.

Exciting stuff then – especially with renowned actress Brie Larson in the title role. Here’s everything we know about the film so far.

Also see: Does Captain Marvel have a post-credit scene?

First up, Captain Marvel comes out early next year, with a cinema release currently scheduled for 8 March 2019, just a couple of months before Avengers: Endgame hits screens in late April/early May (depending on which side of the Atlantic you’re on) to inevitably shake up the whole Marvel universe.

After hitting cinemas, the film will do something a little different. It’ll still come out on Blu-ray and digital as normal, but instead of eventually heading to the likes of Netflix, it will be the first major film to be exclusive to the new Disney+ streaming service, set to launch later this year.

Yup! It took Marvel a while, but it finally used Good Morning America to reveal the first teaser trailer for the film, which you can watch right here:

Then December brought us an early Christmas present: a second trailer for the movie, teasing more of Carol’s back story and showing off her powers at full force:

Marvel even saw fit to lift our January blues with yet another look at the film – this Special Look shows off a few of Carol’s powers and gives us a glimpse of Clark Gregg’s Agent Coulson back in action:

Then the Super Bowl came around to give us what’s probably our final proper look at the film: a 30-second spot that’s built around the ‘Higher. Further. Faster.’ tagline:

Here is that first official look at Larson in costume, from the cover of Entertainment Weekly: 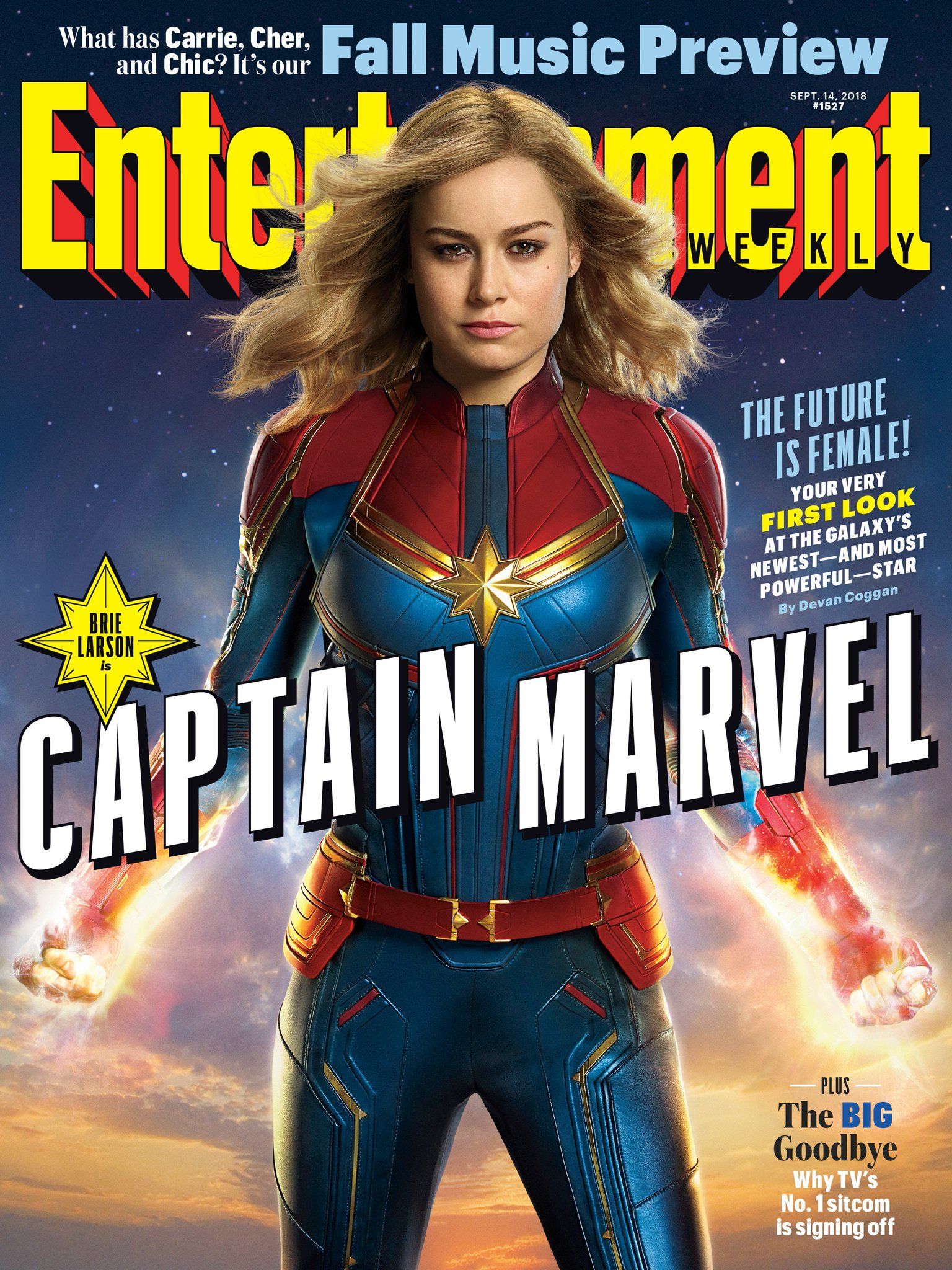 EW also released ten exclusive images from the film (a few of which are behind the scenes) showing off an even better look at the costume, along with a few of the films other characters – and the first big screen appearance of the iconic Marvel alien race the Skrulls: 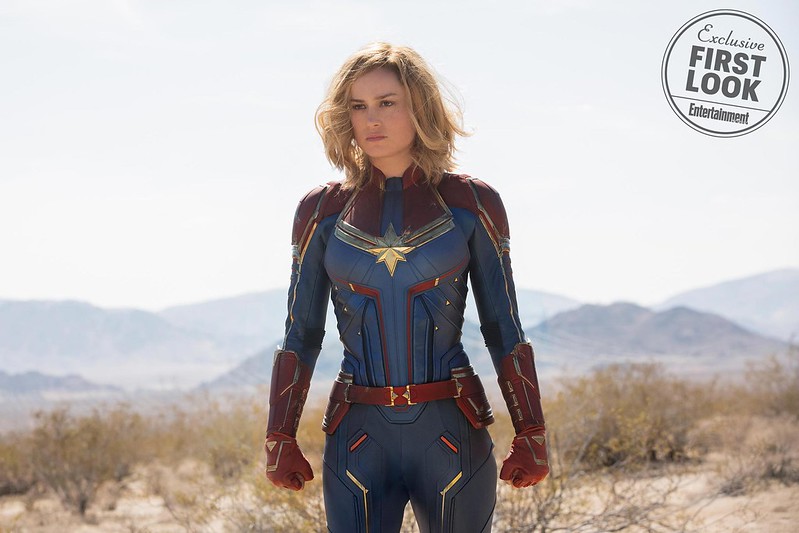 We also have a few official posters for the film: 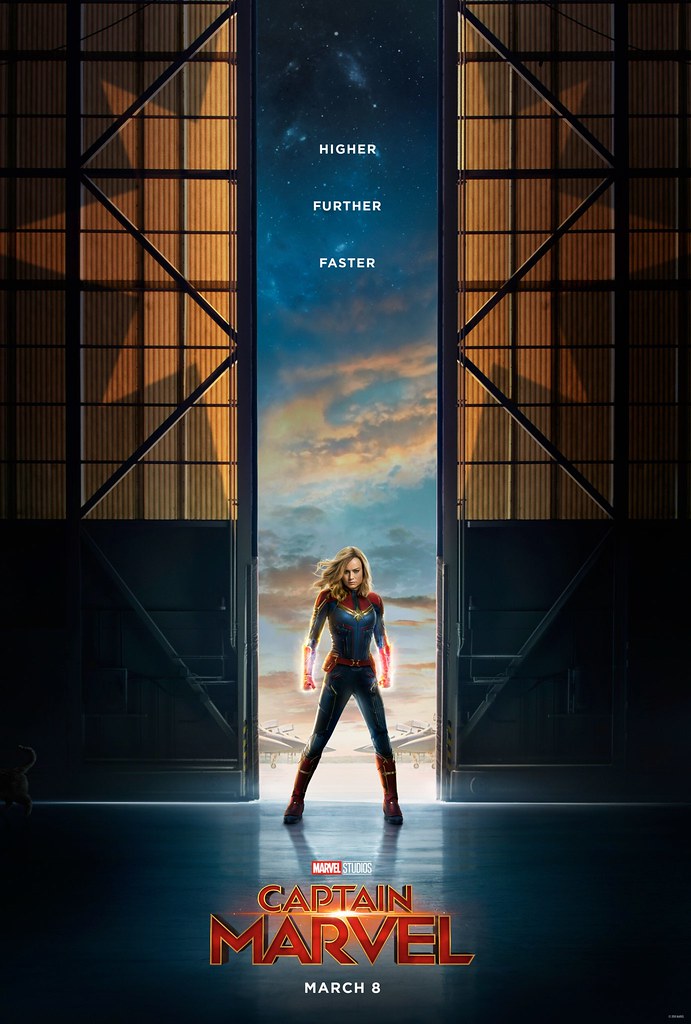 So, the headline news is that the movie’s star is Brie Larson, the latest in a long line of acclaimed actors that Marvel has lured over to put on the tights and cape. She plays Carol Danvers – aka Captain Marvel – with superhuman strength and flight, and a mess of other powers that honestly leave her a bit similar to Superman.

She’ll be joined by Samuel L. Jackson and Cobie Smulders as SHIELD agents Nick Fury and Maria Hill, respectively, in a story that’s meant to be mostly set in the ’90s (once again throwing off the whole muddled Marvel timeline) – meaning we’ll get a younger Fury, apparently even pre-eye patch. Even Clark Gregg’s Coulson is coming back (after a long run as the lead of the Agents of SHIELD TV show) as a younger version of himself.

The rest of the cast includes Lee Pace and Djimon Hounsou (both reprising their roles from Guardians of the Galaxy), along with new roles for Gemma Chan, Ben Mendelsohn, Jude Law, and Annette Bening.

Behind the camera, the film will be co-directed by Anna Boden and Ryan Fleck, both making their blockbuster debuts after a string of TV and indie film work. They also contributed to the screenplay, which includes a whopping five other writer credits.

So, what do we know about the film? Not a huge amount, in all honesty. We know it’s set in the ’90s – though the casting of Cobie Smulders suggests there may be some sort of present-day framing device at work – and we know it’s going to serve as an intro for Danvers, who in the comics got her powers after an accident fused her genetic structure with that of an alien (from a race called the Kree) by the name of Mar-Vell – we reckon that’s Jude Law in the movie.

We’re not actually getting an origin story though, as Entertainment Weekly reports that when the movie begins, Danvers will already have her powers, and that “she’s left her earthly life behind to join an elite Kree military team called Starforce, led by Jude Law’s enigmatic commander.”

The second trailer reveals more of the specifics. It looks like Danvers will be in some sort of accident during her Air Force days which will leave her in the hands of the Kree, where Annette Bening’s scientist rebuilds her as a Kree warrior – with no memory of her Earth life. Those memories are going to come flashing back to her from the looks of things though, and we’re guessing the film’s central mystery will be exactly how Danvers ended up with the Kree.

A Funko Pop reveal (now the staple of superhero movie leaks) also hints that she’ll go by a different name when among the Kree. The toys include both her costumes, but the green Kree one dubs her ‘Vers’ – clearly some sort of shortening of Danvers that might fit in a bit better with all of her buddies’ alien names.

One oddity is that the cast are dancing around whether or not Law is playing Mar-Vell – who was in fact the first Captain Marvel in the comics. We know his character is the leader of Starforce, and Law himself said that “he’s almost a devout warrior—unquestioning, conservative, but inspirational,” along with being a mentor to Danvers. All that fits Mar-Vell, but Marvel just won’t confirm the name for some reason.

The film will include both the Kree and another race called the Skrulls, showing the two of them at war with one another – another comics staple. We’ve already seen the Kree before of course – they were the baddies in the first Guardians, led by Lee Pace’s Ronan the Accuser, who’s conveniently returning here to help tie things together.

As for the Skrulls, they’re a shape-shifting alien race who have caused all sorts of havoc in the comics – including replacing most of earth’s heroes with Skrull duplicates in Secret Invasion, which has long been one of the popular fan theories about what plot Avengers: Endgame might follow. Here they’ll be led by Ben Mendelsohn’s Talos, who’s spearheading an invasion of Earth while disguised as a SHIELD agent, which is likely how Danvers finds herself back on her home planet.

And of course we also know that Captain Marvel will somehow make it to that Avengers movie, and likely prove crucial to the plot – Infinity War‘s post-credit sting saw agents Fury and Hill trigger some sort of signal on a device bearing the Captain Marvel insignia just before Thanos dusted them, clearly hoping Danvers would prove crucial to setting things right again – so somehow, some way, Marvel is going to tie it all together.

That might even tie directly into rumours of time travel featuring in Endgame, as Samuel L. Jackson let slip that Captain Marvel is “one of the few people in the Marvel universe that can time travel.” That could all be a big tease, but if not it could finally explain how the two films are going to link up.

Other things we expect to see include Fury losing his eye (c’mon, they’ve gotta show that), Jude Law’s Mar-Vell dying to inspire Danvers on, and something causing Danvers to leave earth for good – or at least until Avengers 4 – to explain why she hasn’t been around for all those other earth-threatening disasters over the last few years.