Fans have spent much of the last few years debating whether Nintendo’s next Switch console would be called the Switch Pro or the Switch 2, and of course the Kyoto company has managed to surprised us with the Switch (OLED model).

That’s to give the new console its slightly clunky official name, brackets included. That does at least give away the core new feature – a larger, 7in OLED screen – but Nintendo has packed a few other upgrades in, not to mention a swanky white colourway.

Those hoping for performance upgrades beyond the display might be disappointed though, with no CPU or GPU upgrades, no fix to Joy-Con drift, and no sign of the much-rumoured 4K graphics support.

Here’s everything we know about the Nintendo Switch OLED – or you can straight to reading our Switch OLED review if you want to know what we think of the new hardware. You can also watch our unboxing & review above, or check out our discussion of the console in our podcast Fast Charge right here:

Is the Nintendo Switch OLED available?

Nintendo launched the new OLED version of the Switch on 8 October – the same day the company released Metroid Dread, the new 2D installment in the fan-favourite sci-fi series – which itself has already made it into our best Switch games ranking.

That means the new release comes a little over four years after the original Switch, and almost exactly two years after the Switch Lite – both of which will remain on sale for now, giving fans three Switches to choose from.

How much does the new Switch cost?

That’s a modest increase from the regular model, which is remaining on sale at its standard price in the US, and a slightly reduced price in the UK and Europe: £259/$299/€269.

Check out our full guide to where to buy the OLED Switch for our latest, up-to-date guide to stock and deals. Also see where you can get one for free with a phone contract. 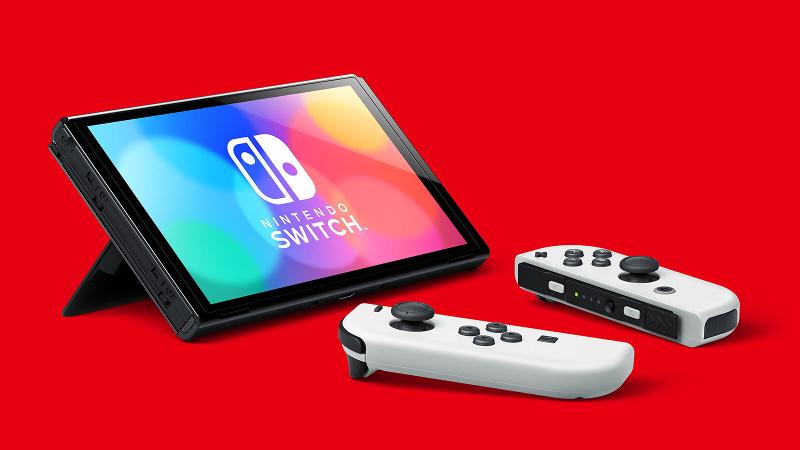 What’s new in the OLED Switch?

While fans had hoped for a serious upgrade to the Switch – to justify that rumoured Pro name – instead the Switch (OLED) is a more conservative step forward.

“Nintendo Switch (OLED model) does not have a new CPU, or more RAM, from previous Nintendo Switch models,” the company told The Verge, dashing any hopes for under-the-hood improvements. 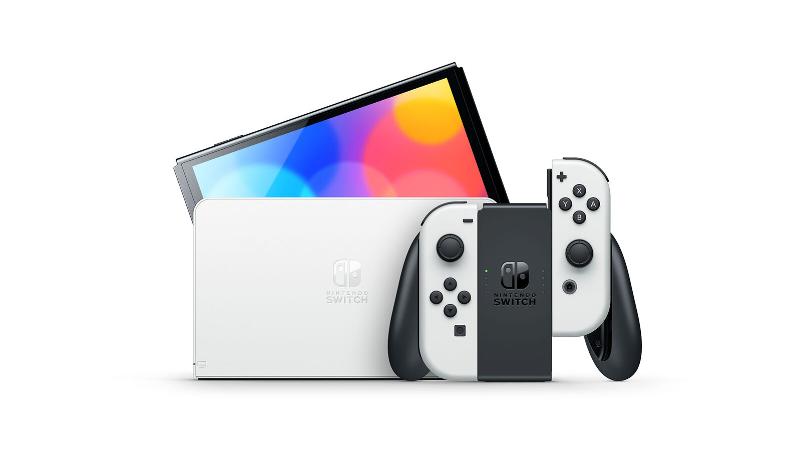 Still, there’s plenty that is new, so here’s what’s changed – or take a look at our Switch vs OLED model comparison for a more specific breakdown of how the new Switch and the standard model compare.

The first big change is in the name.

The Switch (OLED) features – you guessed it – an OLED screen. Nintendo says that the new screen is more vibrant, with “vivid colours and high contrast.”

It’s also larger, at 7in – compared to a 6.2in display on the original Switch. The console itself is only fractionally larger – it’s about 0.1in longer – so the larger screen has instead been achieved by shrinking the bezel, so there are much smaller black bars around the console’s display.

The handheld display is still capped at 720p, with TV output limited to 1080p – if you want 4K you’ll have to keep on waiting.

Before you spot the OLED screen, you might spot the slick new white finish of the Switch OLED.

Not only are the console’s two Joy-Con now white, but so is the new dock – more on that in a bit. 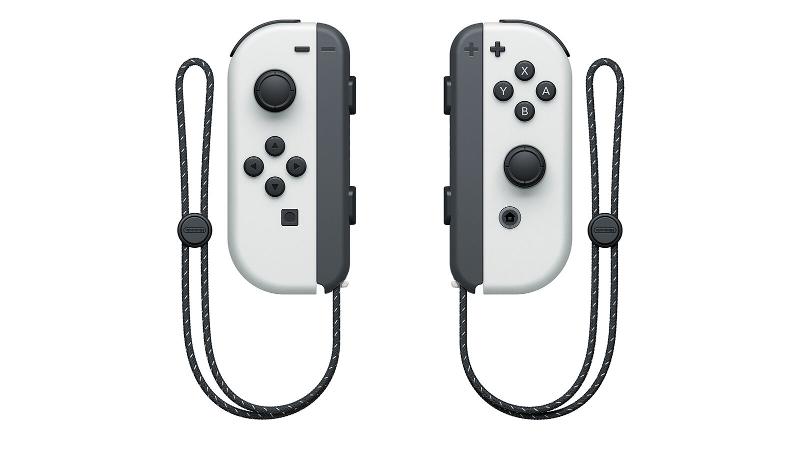 If you prefer the classic colourway, the Switch OLED will also be available with a black dock and Neon Red and Neon Blue Joy-Cons – just like the original Switch.

Thanks to Nintendo keeping the size consistent, any existing Switch Joy-Con will work with the new hardware, so you won’t be limited to the default colours if you’re not a fan.

The downside is that this is because Nintendo hasn’t changed the Joy-Con at all for this release – including not doing anything to fix the notorious Joy-Con Drift problem, where the controllers recognise directional input even when the analogue sticks are in the neutral position.

The situation is better than it sounds though. In a Q&A published to the Nintendo site the company’s Toru Yamashita has since confirmed that the Joy-Con analogue sticks have “continuously been improved” over the last few years, and while he doesn’t claim that the drift issue has been fixed, it certainly sounds like any recently purchased Joy-Cons – including those used here – should suffer from it less than older models.

Another small hardware tweak is an improvement to the plastic kickstand on the rear of the console. 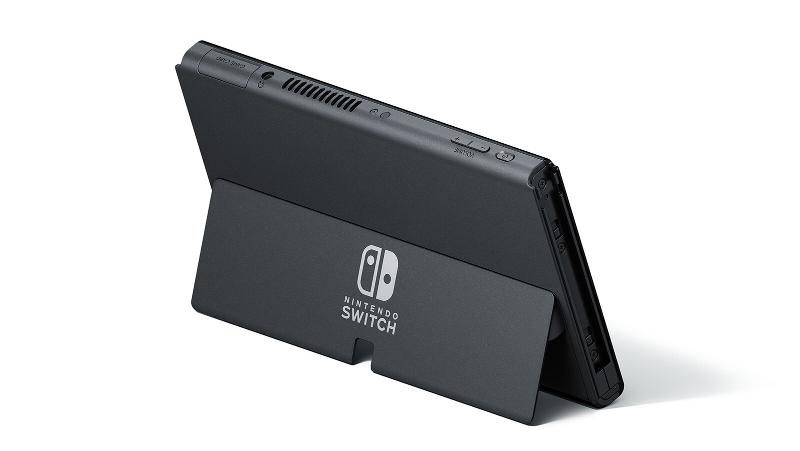 Firstly, it’s now much wider – almost the full length of the console. This should make it much more stable than the smaller kickstand on the original, which sat on one side and left the console a little unbalanced.

Just as importantly, the kickstand is now adjustable, letting you pick from a few specific angles to sit the console at for tabletop play – a welcome bit of extra flexibility.

We’ve already mentioned the new white version of the dock. but that’s not its only surprise. Whichever colour you opt for, the new Switch OLED comes with a dock that includes a LAN port, allowing you to hook the console up to wired internet for faster speeds and improved stability. 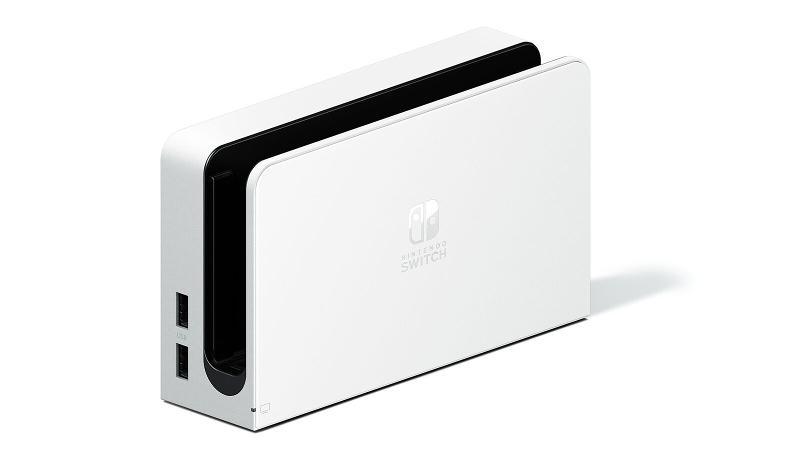 It’s worth noting that you can still use the OLED Switch with existing docks, and you can use the regular Switch in the new dock – and the LAN port will work with the older hardware too.

Nintendo hasn’t given the Switch’s core specs a big upgrade, but there is one enhancement: internal storage has doubled from 32GB to 64GB.

Since much of that 32GB was actually reserved for the console operating system, this is actually more than a doubling of available storage space – you now get 54.9GB of usable space from the get-go.

The OLED Switch will remain compatible with microSD cards too, which will likely still be necessary for most people with serious digital game collections.

The final hardware upgrade is what Nintendo calls “enhanced audio” from the onboard stereo speakers, though the company hasn’t gone into the specifics on what’s changed.

While we’re on audio, when Nintendo first announced the Switch OLED we were frustrated that there was no mention of support for Bluetooth headphones, one of the most requested upgrades from the original hardware.

In September the company quietly added Bluetooth headphone support to every Switch in a firmware patch though – only the four years since the hardware launched – so technically the OLED model will be the first Switch to launch with Bluetooth audio support included.