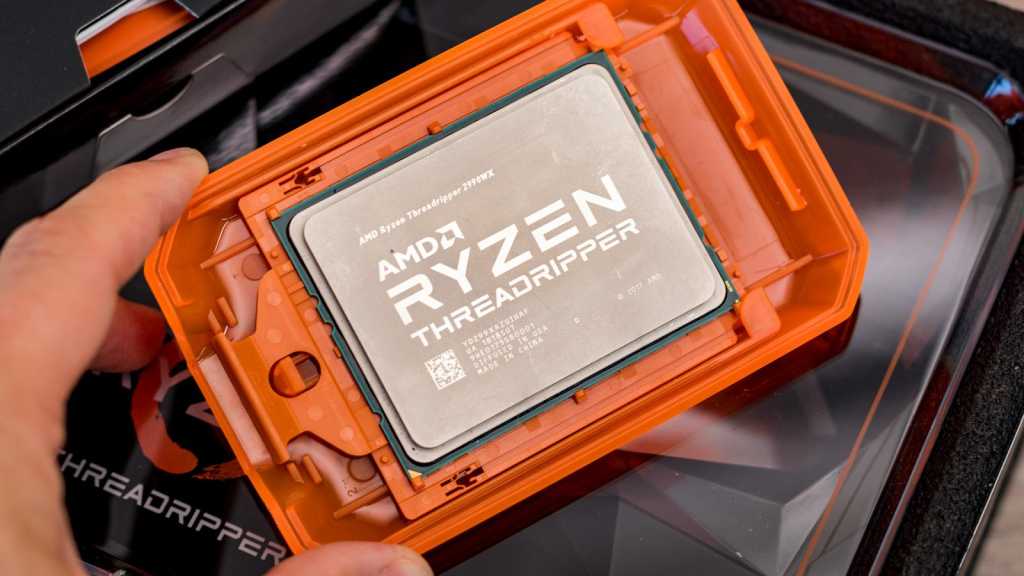 AMD’s recent release of its second generation Threadripper series has raised the bar for raw processing and computing power in the consumer space, featuring a massive 32 cores and 64 threads on its  flagship model. Intel’s direct competition for the Threadripper is its Core-i9 series, which features a similar core count for those workloads that require excessive processing power.

Comparing the two lines as they currently stand will inherently favour AMD as its most recent product has just released and Intel’s next i9 release looks to be around the October time this year, however if you’re looking for a big CPU to tackle those large workloads right now, we’ll talk you through your best choices.

Take a look at our review of the new flagship Threadripper 2990WX here, as well as our take on the 7900X.

The second generation Threadripper series has a very wide price band. The cheapest model (2920X) will set you back around $649 while the flagship (2990WX) sits at an eye watering $1799 ( £1640), so at this point it’s important to remember that these chips are not for your average consumer and are really aimed at the extreme enthusiast or professional that needs a huge amount of processing power for their work.

The most recent generation of Core-i9 processors follow a similar pattern with the cheapest model (7900X) being $989 and the flagship of the generation (7980XE) being $1999.

The price band for the Intel chips is a fair amount higher than it’s AMD counterpart, although perhaps if you’re in the market for a processor with this level of power then price may not be a primary concern. Regardless, as across its other lines, Intel remains the more expensive option on average. The question is if this additional cost is justified in the CPU’s performance which we will dive into next.

Below you will find a series of benchmarks which helps us glean an insight into the performance of the processors in comparison to each other. These figures were put together by our colleague Gordon Mah Ung over at PC World.

The primary conclusion to draw between the two competitors here is that they’re both exceptionally powerful CPUs and are excellent at taking on the task of multithreaded applications, and this is hardly a surprise.

However, both of these lines excel in slightly different areas.

This is why the 2990WX does so much better on the Cinebench Multithread, Blender CPU Render, Corona Renderer and V-Ray Render tests. The additional grunt that the CPU is able to provide the software, thanks to the increased amount of processing power produced by the larger amount of cores, allows it to pull far ahead of the Intel chips in these tests.

However, in programs that have a limitation on how many cores they can use such as Premiere Pro CC 2018 or Handbrake, the Intel chip starts to pull ahead.

This is in part due to the higher speeds that each individual Intel core is able to boost up to but even with that in mind, the additional boost in speed doesn’t explain the difference in processing time alone. It could be that the Intel cores are in general more efficient or that Premier Pro favours Intel CPU’s thanks to its long standing spot as the performance chip of choice for several years.

This means there is a point where if you know you’re planning to use software that requires a certain amount of cores, you can make an informed decision on which brand of processor of the current generation to buy. We can see this below. 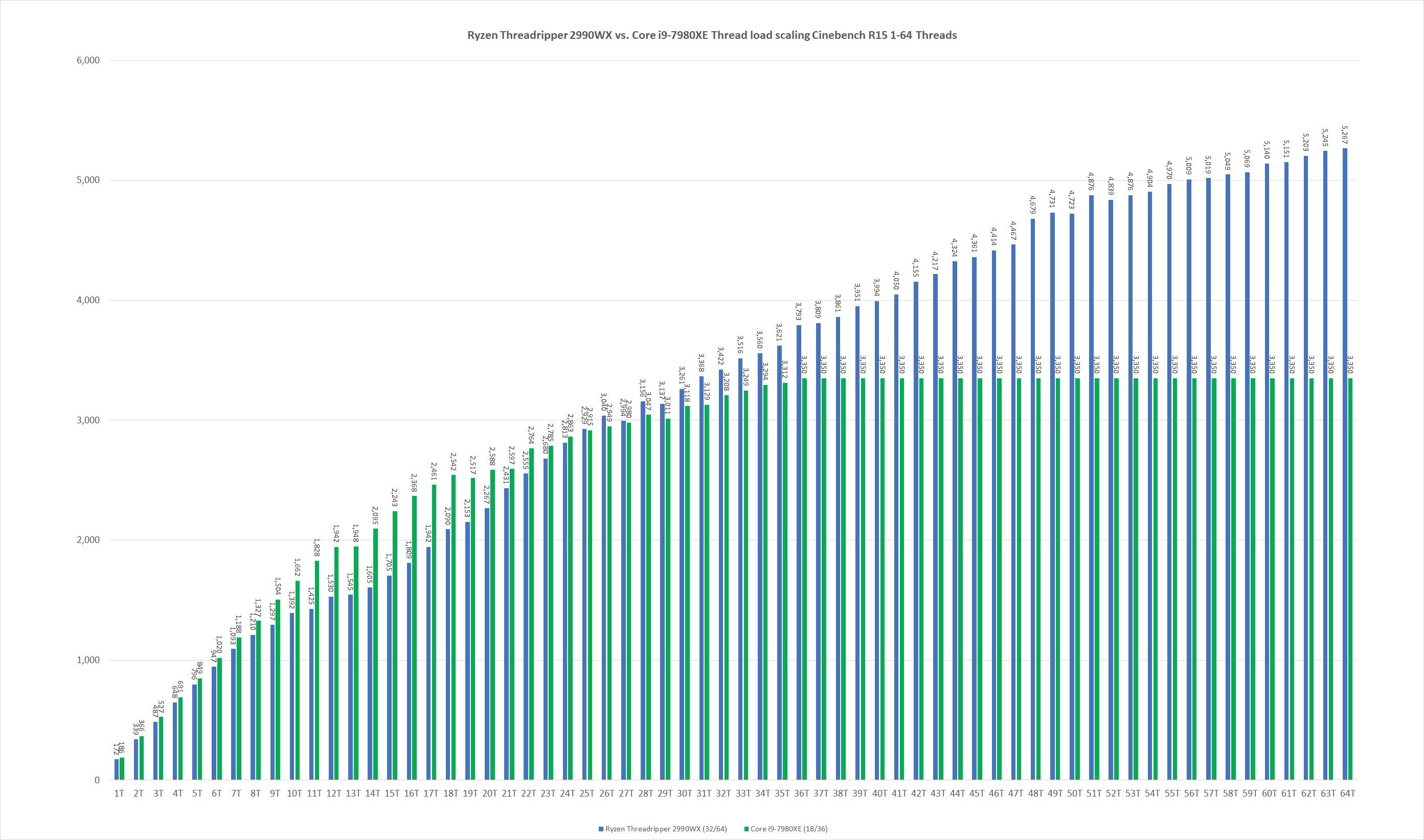 The above graphic, again from Gordon over at PC World, shows the performance of each CPU core by core. You can see the Intel chip providing a higher performance with a lower core count but the Threadripper pulls away once you get past the 14 core / 28 thread mark.

The very final benchmark test shows both Premier Pro and Blender running at the same time, and where can see the Threadripper is a whole 90 seconds faster at completing the tasks provided. This once again shows the performance bonus of the additional cores when running multiple multithreaded applications at the same time.

The second generation of Threadrippers pull a very large amount of power from the board, with the two smaller ones pulling 180W compared to the larger ones pulling a huge 250W from your PSU. This contrasts heavily with the Intel chips pulling 140W/165W respectively.

In terms of cooling some of the Intel chips suffer due to the decision to use thermal paste instead of solder between the CPU die and the metal head spreader. This is a far less efficient method for cooling which means you’re going to need an extremely impressive CPU cooler to keep the i9 at a reasonable temperature while overclocking.

Standard air coolers will struggle to keep the temperature at acceptable level even at stock speeds when the chip is under load.

This is not a problem that the Threadripper suffers luckily as the chip stays at a nice and reasonable temperature even with AMD’s own stock air cooler the ‘Wraith Ripper’.

While Intel still own the better single core performance, AMD’s ability to stack core after core on top of each other to crunch massive amounts of data is helping them win out at the true ‘pixel pusher’ end of the market. If you want a CPU to blast through a bunch of data and your software isn’t limited to a certain amount of cores, the Threadripper is going to be your chip of choice.

The Threadripper series also offers a very impressive value proposition down at between $27-28 per core, whereas Intel’s i9 series is closer to the $50 mark.

This could all be set to change as Intel’s next i9 is due to launch in a couple of months, and we’re all waiting to see how they tackle this particular area of the market. However, as it currently stands, the Threadripper provides better general performance at a lower price, unless you’re specifically using multithread programs that favour fewer cores.