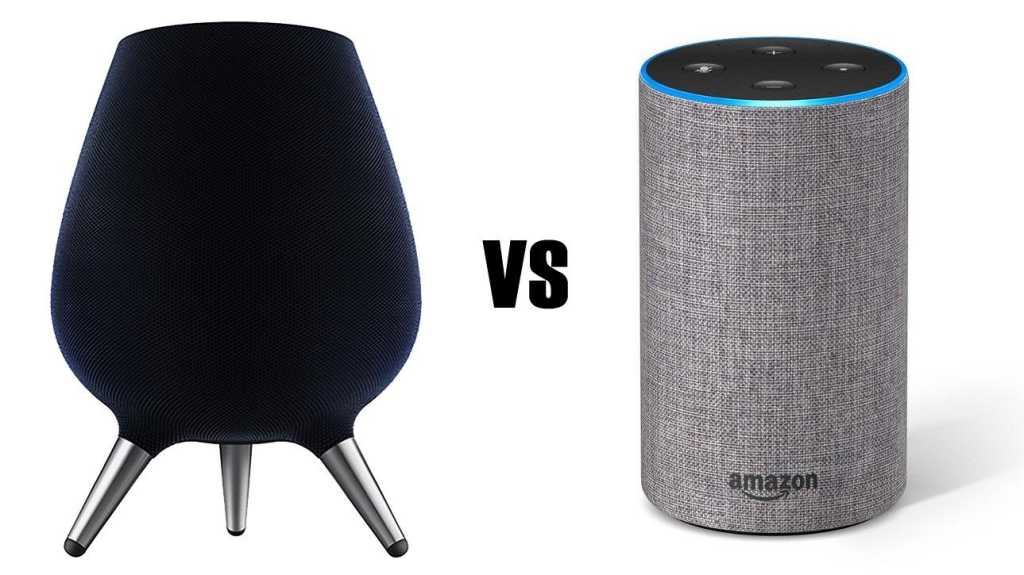 Smart speakers are, according to a recent survey, already actively in use in around 3m UK households.

Amazon’s Echo is by far the most popular choice, no doubt in part because of the affordability of the Echo Dot. Google launched a mini version of its Home to compete on price, and both devices are very handy indeed.

So can Samsung compete? When it announced Bixby 2.0 around a year ago, it said that a smart speaker would launch “soon”. And yet, although the Galaxy Home itself has been unveiled, there is still no word on when it will go on sale, nor how much it will cost.

The latter is a bit of a problem when comparing it to Amazon’s Echo range, but most experts reckon it will be considerably more expensive, with estimates ranging from £219/US$249 (Bloomberg) to US$300 (WSJ).

Amazon’s Echo, at least the second-generation model, has the option of a fabric cover as well as wood or metal finishes. This is an improvement upon the original plastic cylinder which didn’t exactly blend well into your living room.

The Galaxy Home’s design is a little more avant garde, with a bulbous body perched on top of three stainless steel legs.

We don’t know yet if it will be offered in any colour other than black, but it is larger than the Echo 2 and possibly bigger than Apple’s HomePod.

On top, the Home has a flat deck with physical buttons and a glowing white ring. Pretty similar to the Echo there.

Unusually for the company which has staunchly defended the headphone jack by incorporating it into all of its latest phones, the Home speaker doesn’t have an aux input. This makes it more like the HomePod than the Echo.

The same can be said for sound quality. With an array of six full-range drivers, a ‘subwoofer’ and tuning and technology by AKG and Harman (both brands owned by Samsung) the Galaxy Home should easily outclass the Echo 2 for music playback.

We haven’t yet heard it properly ourselves: although Samsung demonstrated quality with 160 Galaxy Homes all playing together, smart speakers need to be auditioned in a real home environment.

What we do know is that the speaker will have similar tech to the HomePod and be able to reflect ambient sounds off walls and even “sound steering” so audio can be directed to a specific point in the room.

If the estimated prices are correct, the Galaxy Home will need to sound a lot better than the Echo 2, which costs just £89.99/US$99.99.

A smart speaker is only as smart as its built-in assistant. And though you may complain that Alexa is dumb, she’s got quite the lead over Samsung’s Bixby.

Samsung demonstrated Bixby (on a Galaxy S9) ordering an Uber and reserving a table at a restaurant, but this isn’t really what people use their smart speakers for.

A primary reason to buy one is for music, and Samsung doesn’t have a streaming service like Apple, Google and Samsung. For this reason it has teamed up with Spotify in what it says is a long-term partnership.

So, we’re certain that Bixby will be able to serve up songs, albums and playlists easily enough.

When it comes to smart home control, Alexa has excellent compatibility with lots of hardware thanks to the library of Skills which has been gradually expanding since Alexa first launched.

Samsung has its own SmartThings platform for smart home control, but while you’ll be able to ask Bixby to turn on the lights, support for SmartThings isn’t quite on a par with Alexa. Whether things will change before the Galaxy Home launches remains to be seen.

Bixby can handle all the essentials, just like Alexa. So you can ask for a weather forecast, the news headlines or a timer for your boiled egg.

Bixby can also follow a conversation and remember context. Alexa still isn’t really able to do this, and we’re still waiting to be able to give her multiple commands in one go.

Should I wait for the Galaxy Home?

It’s too early to come to any conclusions about whether the Galaxy Home is a better buy than the Amazon Echo. Once we know how much it costs and what it sounds like we’ll update this article. However, if it does end up costing twice as much – or even more – than the Echo 2 then it’s likely Amazon’s speaker will remain the one to buy for most people.