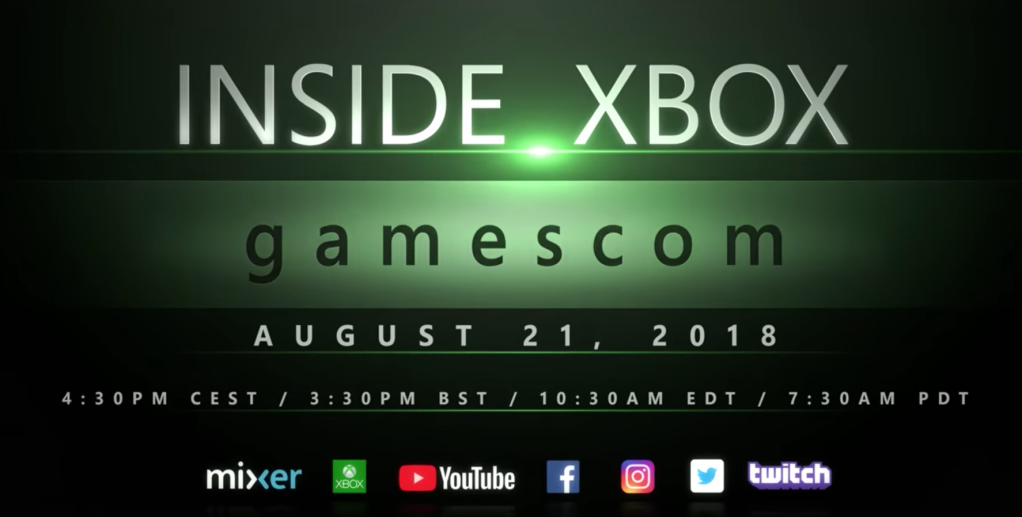 Microsoft has confirmed that it’ll be hosting a special episode of Inside Xbox at Gamescom 2018 later today where viewers will be amongst the first to see “breaking news, exclusive interviews, and never-before-seen content” from the likes of Forza Horizon 4, Sea of Thieves and more. It’s certainly set to be a packed show, and the good news is that you can watch it from the comfort of your own home if you’re not lucky enough to go along to the show in Cologne.

Here, we explain how to watch the Xbox Gamescom 2018 live stream and discuss the possible announcements to expect.

When is the Xbox Gamescom live stream taking place?

Microsoft’s Xbox-themed monthly live show Inside Xbox will be broadcast directly from Gamescom today, Tuesday 21 August 2018 at 3:30pm for those of us in the UK, or 10:30am ET for those in the US.

The stream takes place on the official opening day of Gamescom 2018, and will hopefully be one of the most exciting episodes of the show since E3 2018.

How can I watch the Xbox Gamescom stream?

Like previous episodes of Inside Xbox, the Gamescom-themed show will be available to watch live not only via the official Xbox Mixer page, but via YouTube too.

What should I expect to see?

With such a big presence at E3 2018 in June, what does Microsoft have left to announce? The Director of Programming at Xbox Live, Larry Hryb, took to his own personal blog to confirm the presence of several titles during the stream. As noted by Hryb, the highlight of the stream will be Forza Horizon 4,  and we expect to get a proper look at the open world gameplay ahead of release later this year.

If driving isn’t your thing, Hryb has also confirmed that we’ll also be getting our first look at Sea of Thieves’ “Forsaken Shores” DLC that extends the map and introduces new rowboats, along with a new game mode coming to State of Decay 2 soon.

But alongside the appearance of several big upcoming games, Microsoft has teased other content. The company has said that those who tune in live will be the first to see “breaking news, exclusive interviews, and never-before-seen content”, suggesting that we might see an Xbox Game Pass-themed announcement or the reveal of a second-generation Xbox Elite controller.

Whatever Microsoft has planned for the Inside Xbox stream, we’re sure it’ll be exciting.