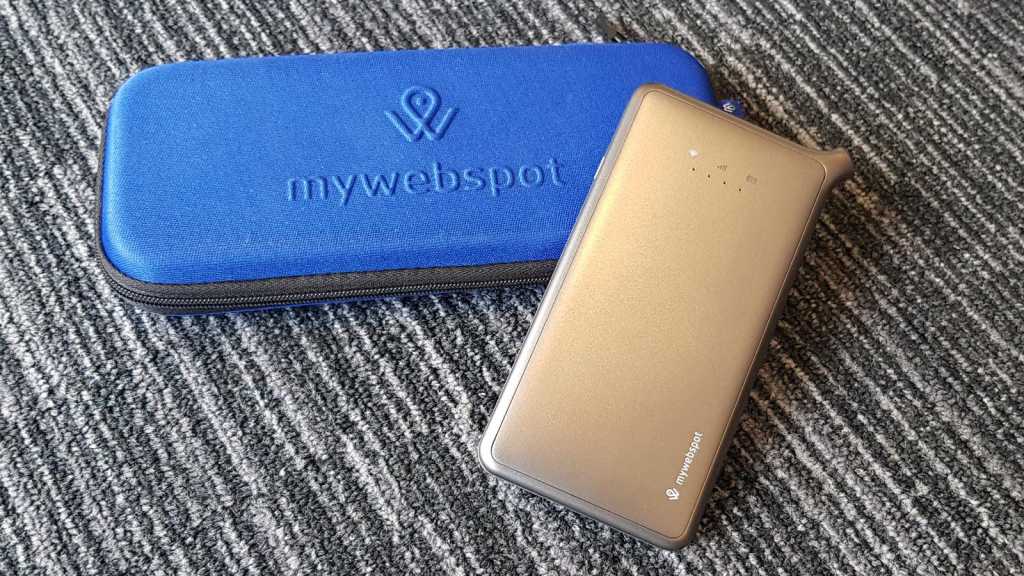 For now us Brits have the benefit of free data roaming within the EU, but it’s not always enough to take the sting out of our holiday Wi-Fi costs. If you’re holidaying outside Europe, you’ve already gone over your data allowance, or your party has tablets and laptops without data SIMs, many hotels and resorts still charge extortionate fees for what is usually slow- and time-limited Wi-Fi access.

MyWebspot is a 4G-rental service that has the power to change this. You pay a daily charge for a mobile Wi-Fi router that you can use in more than 100 countries, which can be shipped directly to your resort along with a pre-paid envelope into which you can simply pop the device and drop it in a post box on your way home.

The service offers ‘unlimited’ 4G LTE data, which can be shared with up to five users via the supplied mobile Wi-Fi hotspot. It has a daily fair-usage policy, which means once you go over the limit your bandwidth drops to an almost unusable 256kbps, but the allowances are generous in most parts of the world (as outlined in the table below).

At first glance this seems rather expensive, but take into account that once you have gone over your phone’s data limit the charges for extra data can be insane and quickly rack up – Vodafone, for example, charges £6.50 for each additional 250MB if you don’t amend your plan.

How to use MyWebspot

The idea of having a device shipped out to you at your holiday destination might seem offputting: what if you can’t figure out how to use it, what if it’s rubbish? How will you even know where to send it?

Fortunately, MyWebspot could not be simpler to use, and if necessary it can be delivered to your home address before you leave (the option we chose). It is the same device as that used by GlocalMe, a service that allows you to purchase data on a PAYG basis abroad ( reviewed here), which meant it was instantly familiar to us.

It is a mobile Wi-Fi router that comes completely ready to go, along with a carry case that includes a local Micro-USB charger and lanyard. Once fully charged (which can take up to 3.5 hours) the battery lasts eight hours, which is plenty of pool time, and it still works while charging when you’re back in your room.

We found the device could get rather warm (not too hot to touch) while charging, but there is a definite element of you’re only renting this thing so it’s not your responsibility. Don’t be too careless, however, because you’ll be charged €180 if you fail to return the device (€90 if you’ve added insurance for damage or loss).

You turn on the MyWebspot device using its power button, and it will automatically connect to a local 4G LTE network, offering theoretical download speeds up to 100Mbps and uploads up to 40Mbps (shared when more than one device is connected). In our tests south of Lake Garda we found an average download speed of 33.5Mbps, and upload speed of 26.8Mbps.

If this is the first time using it then it may take a couple of minutes to connect, but in general connection is fairly rapid – or at least that was our experience when testing in Italy last week.

There are three LED icons on the front: Wi-Fi, signal strength and Battery. As soon as the Wi-Fi icon is lit it’s ready to go, and you can pick up the 802.11b/g/n network it creates on your phone, tablet or laptop as you would any other Wi-Fi router. The SSID and password can be found printed on a label on the back.

We were surprised by just how easy the MyWebspot was to pick up and use. Indeed, we spent the first five minutes looking for some sort of companion app that we assumed would be necessary for tracking usage, but there is none. This is good and bad: ideal for simplicity, but being able to track usage would be useful when you have five people using the connection to stream YouTube videos and Netflix movies.

Of course, there are some steps you can take to reduce Wi-Fi usage abroad, such as turning off photo backup services such as Google Photos and iCloud, downloading Netflix or YouTube shows before you leave home, and using free local Wi-Fi where it is available.