Nintendo doesn’t support virtual reality on the Switch, or port its games to other companies’ VR platforms, but that doesn’t mean there’s no way at all to play Nintendo games in VR – it’s just limited to arcades.

That’s how you can strap yourself into your own kart in the VR version of Mario Kart, which combines classic Mario Kart gameplay with the HTC Vive headset and some custom karts complete with steering wheels, pedals, and force feedback. Here’s how you can play it for yourself.

Where can I play Mario Kart VR?

First launched in summer 2017, Mario Kart VR was exclusive to a single VR arcade in Tokyo for over a year, but that’s finally changed. As of August 2018 the arcade setup has launched in a second location: London.

The game launched exclusively at the VR Zone Portal located within the Hollywood Bowl in the O2 in London – its first appearance anywhere outside of Tokyo – with plans to expand to VR Zone Portal branches in Leeds and Tunbridge Wells later in 2018. Head to the official website to find out more about where you can play the game, and how to book a slot.

There’s no word yet on the game reaching the US, but we’ll update this article as soon as we hear more.

It’s also worth a reminder that this is an arcade exclusive. Even though it uses HTC Vive hardware, there’s no way to download a copy that you can play at home – this is strictly arcade-only, and that’s not likely to change any time soon.

How much does it cost to play?

We’re going to warn you straight away: this isn’t cheap. The current setup lets four people play the game at once, racing against each other. It costs £7.99 per person to take part, though a group of you can save money by paying £24.99 for all four machines at once – which works out around £6.25 per person. 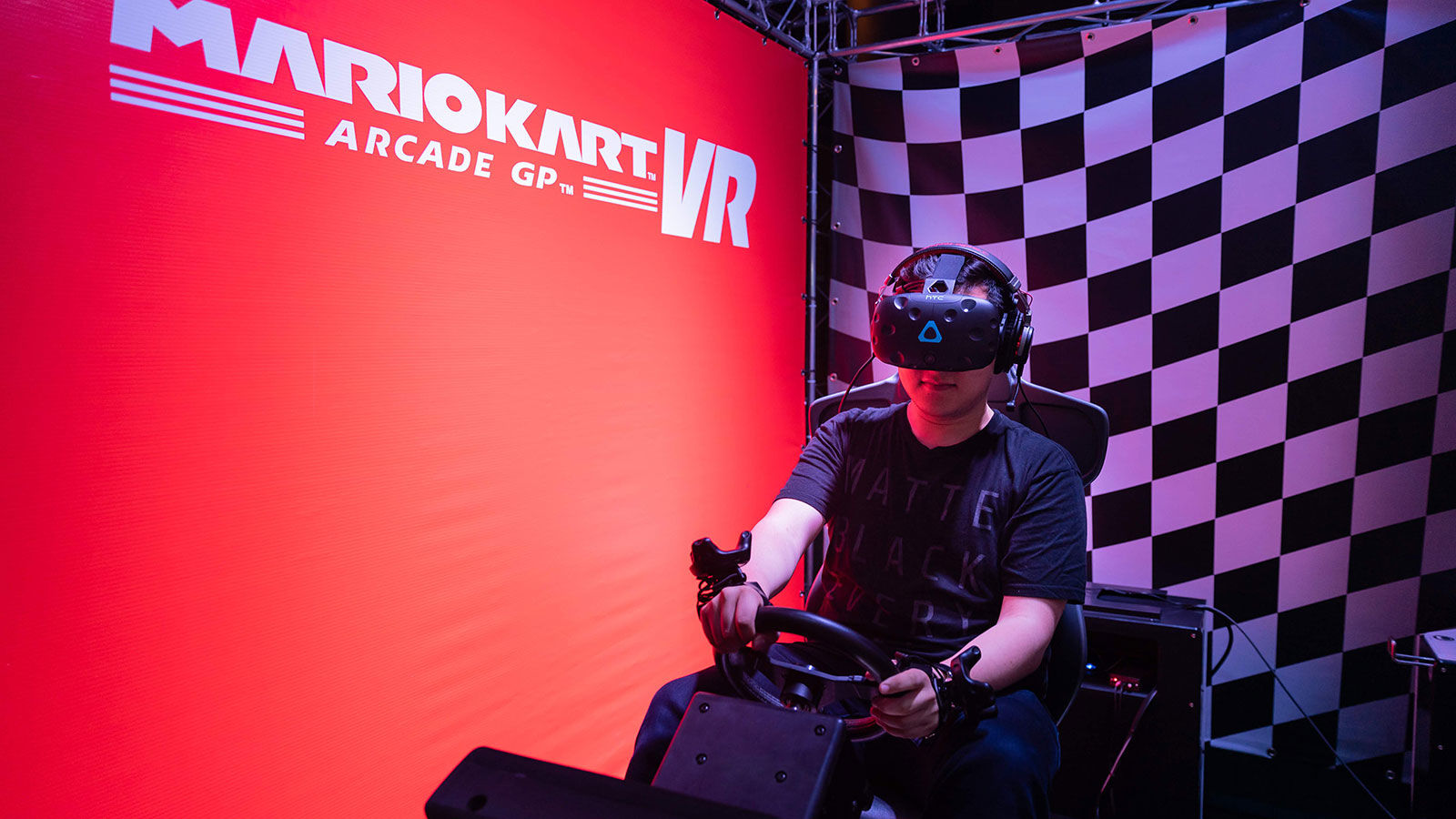 We were lucky enough to get some time playing the new Mario Kart VR – officially titled Mario Kart: Arcade GP VR – at the O2 before it opened to the public, and here’s what you can expect.

This follows in the tradition of existing Mario Kart arcade machines, which have for years been released on a different schedule to the main console games, and with slightly different features, courses, and characters – so don’t go in expecting a port of Mario Kart 8 Deluxe from the Switch.

You’ll sit in a physical kart setup with pedals for acceleration and braking, a steering wheel, a Vive headset (including two hand trackers – more on them in a minute), and a pair of headphones with a microphone so that you can trash talk the competition as you go.

You get the choice to play as one of Mario, Luigi, Peach, or Yoshi, in a six-person race which also features computer-controlled giant versions of Bowser and Wario. You race around one large course with takes 90 seconds or so to complete, diving between a few classic Mushroom Kingdom locales and negotiating speed boosts, jumps, piranha plants, thwomps and more along the way.

Those discrete race sections are one of Mario Kart VR’s smart concessions to the format: the screen actually fades to white between segments, which the game uses as a sneaky excuse to bring racers closer together. It’s the most blatant example yet of the series’ longstanding efforts to help lagging competitors catch up, but it’s genius here.

The last thing you want after paying £8 for a race is to spend the whole time driving about on your own, miles away from the other karts, and so while Mario Kart VR does somewhat eliminate the competitive aspect of things, it’s all in the name of keeping it fun for everyone throughout. Plus, it’s so sneakily done that there are good odds you won’t even notice it happen. 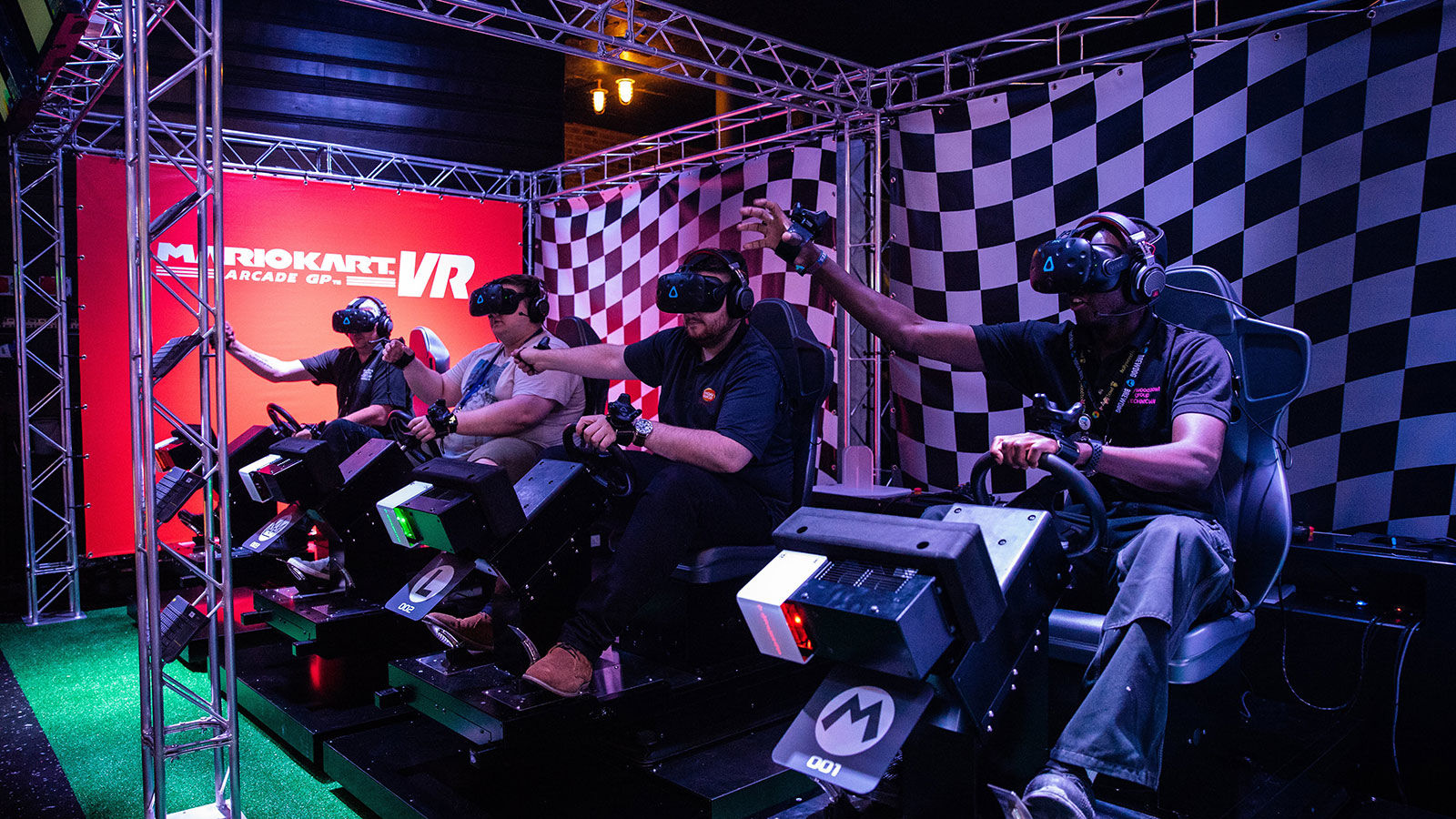 The other big switch for VR comes in the items. Rather than the usual random item boxes, in this version of the game items float across the course dangling from balloons, and you can see exactly what you’re going to get: a banana skin, a green shell, or a hammer. The only catch? You have to grab them first.

That’s where those hand trackers come in. Instead of simply driving through items you have to physically reach out to grab them from the air, which is also how you use them. This is one of the game’s absolute best touches, and it’s strangely thrilling hurling a green shell forwards with your own arm, lobbing a banana skin over your shoulder, or just wildly swinging a hammer around at any racer within reach.

And that really gets to the heart of what Mario Kart VR is all about: it’s a very silly, very immersive, very fun take on a series we’ve probably all played to death. This is Mario Kart stripped down to the basics to get at what really matters: sheer, unbridled chaos, with victory – or crushing defeat – only ever a single rogue shell away.