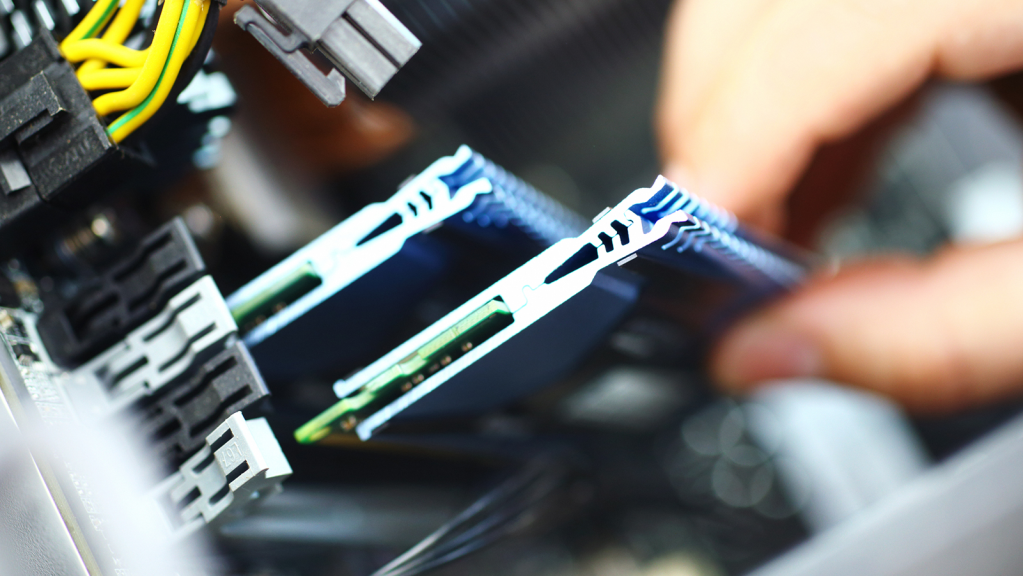 The Random Access Memory, or RAM, is crucial to the effective functioning of a PC. It acts as a short-term store of access data, allowing you to carry out a host of functions almost instantaneously.

Browsing the web, streaming video and gaming all wouldn’t be possible without RAM. However, this continues to get more efficient over time, so it’s worth upgrading.

However, you can’t always rely on the BIOS (or UEFI) to enable the highest speeds. Here’s how to optimise your RAM for maximum performance.

How to upgrade the RAM

The upgrading process itself isn’t difficult, and may even work on some laptops. Assuming you have decent access to the memory slots, it’s as simple as pushing the memory sticks into place. Just make sure the power is turned off, and battery removed if you’re working on a laptop. Ideally use an anti-static wrist strap, too.

Modern computers should automatically detect new memory next time you boot them up, but they won’t necessarily pick the correct speed and other settings. These days, a standard called SPD (Serial Presence Detect) is used which should make the process automatic. And while it works well most of the time for standard memory, if you’ve bought super-fast RAM you should check that it’s running at full speed. And here’s how to do exactly that.

How to check the speed of your RAM

Click on the Memory tab and it will tell you the current speed – next to DRAM Frequency – of your RAM. This will probably be around half the speed you were expecting to see, but that’s because it’s DDR memory. 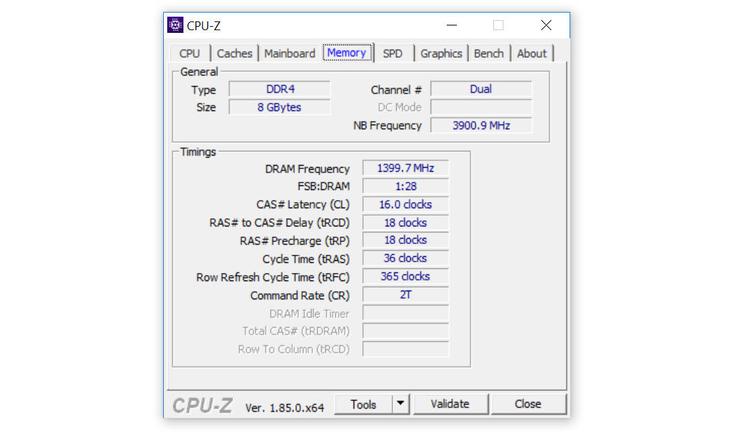 DDR stands for double data rate, so the effective speed is twice the frequency. In our case, that’s 1400MHz, which becomes an effective 2800MHz.

Click on the SPD tab and you’ll be able to see the details of each memory stick installed by selecting them from the drop-down menu. 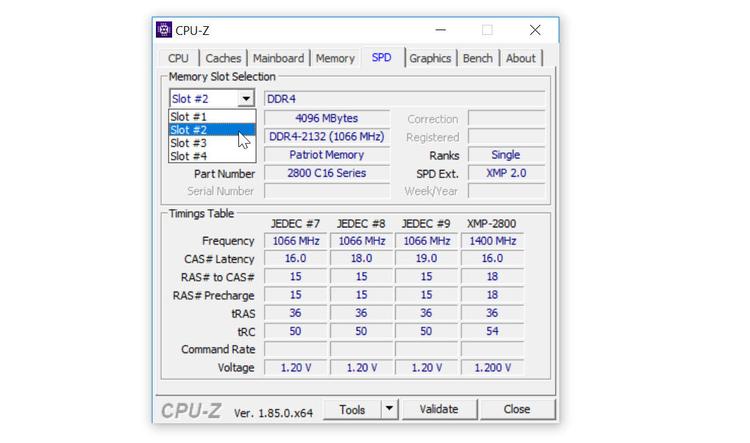 Our PC has two 4GB sticks of “Patriot 2800 C16” according to CPU-Z. This information can be useful if you don’t know what’s installed, and to check which slots are occupied.

However, to know is these are the optimal slots, you’ll need to refer to your motherboard manual. This will tell you which slots to install memory depending on the number of sticks you have. The typical setup is two sticks, and these should be installed so they’re on separate channels. That’s why the manual will usually tell you to install one stick in “A2” and the other stick in “B2”, such as in the middle example below, rather than next to each other.

This is because having one stick in each channel leads to better performance than having two sticks operating on the same channel. So check inside your PC and move the sticks around if they’re not in optimal locations. The advice doesn’t apply to laptops, which may have only one or two slots.

Using the manufacturer and part number provided by CPU-Z is often enough to be able to look up your RAM’s specs online and see what speed it should be running at. In our case, we had to check the physical sticks as the actual name is Patriot Viper Xtreme.

Fortunately, it was running at the correct 2800MHz speed. But if you find that your RAM is running slower than it should be, here’s what to do.

How to set the RAM speed in the BIOS

As we’ve said, all recent computers – recent being those from the last 4-5 years – should have a BIOS or UEFI which will set the memory timings according to a JEDEC-approved SPD table.

That’s a barrel-load of acronyms, but in essence, it means that the RAM can be automatically set by the motherboard to a ‘safe’ frequency that’s already been tested and known to work.

You can see these settings in CPU-Z as they have ‘JEDEC #5’ at the top. JEDEC, if you’re curious, is the Joint Electron Device Engineering Council which determines these standard speeds.

But if you have fancy-pants gaming RAM, it will be able to operate faster than those standard speeds. But unless you’ve enabled XMP in your BIOS, it won’t be.

XMP (which stands for Extreme Memory Profile) is an Intel technology which lets you quickly set multiple memory timings simply by selecting a profile.

You do need to do this in the BIOS, though, so restart your PC and press whichever key takes you there. Look out for instructions on-screen as your computer first starts to know which one it is. 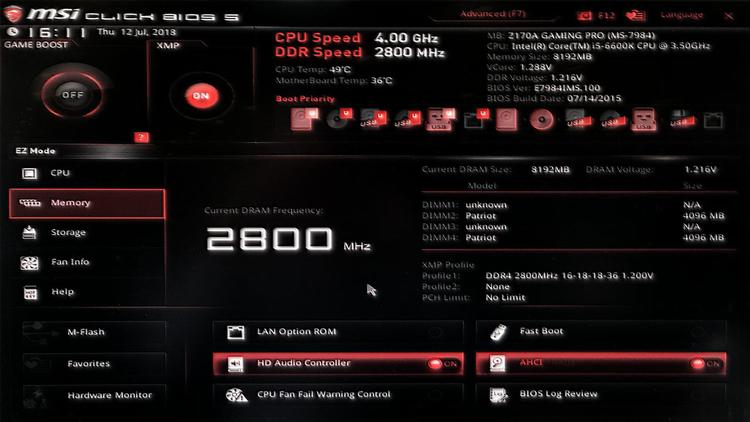 This MSI BIOS makes it extremely easy, because there’s a big XMP on/off button on the main menu, and in EX mode, it even displays the frequency in a huge font. But you may have to search around in the memory, or advanced settings in your BIOS to find it.

If your RAM has more than one XMP setting, then you can choose the fastest and see if your PC runs ok. If not, step down to the slower and try again.

Again, this MSI BIOS displays the changes you’ve made to highlight the before and after settings – you can see the RAM speed jumps from 2100MHz to 2800MHz when you enable XMP. 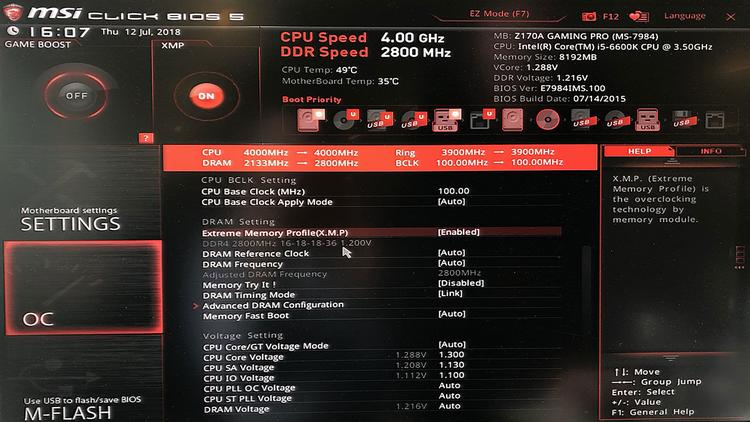 Unless you know what you’re doing, don’t change the individual timings of your RAM in the advanced memory settings.

When XMP is enabled, and the profile selected, save the changes in the BIOS and restart your PC. Check CPU-Z again when Windows is running and you should find that your RAM is now running at its optimal settings.