The Galaxy S10 marks the 10th revision to Samsung’s S-series of flagship smartphones, unveiled at Samsung’s Unpacked 2019 press conference. For 2019 it’s joined by a new sibling in the Galaxy S10e (a ‘Lite’ version), as well as the S10 Plus, and sees all-round upgrades to design, performance, photography and more.

This is the first in the line to include an ultrasonic in-display fingerprint sensor, and there are now three camera lenses at the rear. The S10 Plus even gains an extra camera at the front.

The new Infinity-O Dynamic AMOLED display is simply gorgeous, HDR10+ enabled with dynamic tone-mapping, and a punch-hole cutout for the selfie camera leaving masses of room for pure screen. It’s larger too, with the trio adopting 5.8-, 6.1- and 6.4in displays.

“Galaxy S10 builds on [an] incredible legacy, and delivers breakthrough display, camera, and performance innovations. With four premium devices, each built for a consumer in mind, Samsung is leveraging a decade of industry leadership to usher in a new era of smartphone technology,” said Samsung President DJ Koh.

You’ll also like:  Looking ahead to Samsung Galaxy S11 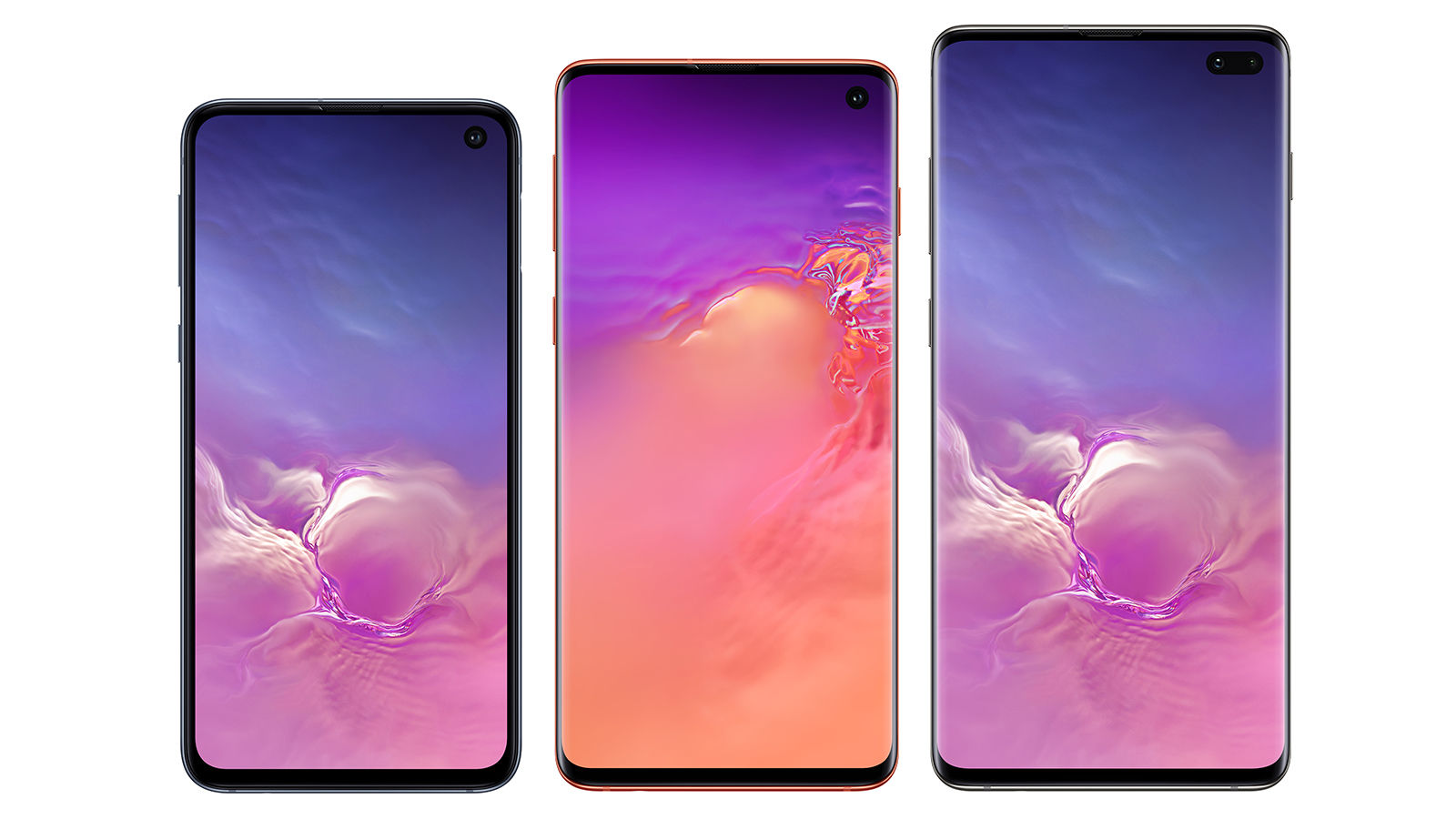 All three phones come in Prism White, Prism Black and Prism Green, with additional Ceramic Black and Ceramic White options for the Galaxy S10 Plus.

The new phones are available to buy now following the 8 March release date. If you didn’t pre-order to get some free  Galaxy Buds, you can still get a wireless charger thrown in while stocks last.

Click here to order direct from Samsung or via Carphone Warehouse.

Samsung says it’s been the most popular Samsung phone for pre-orders in UK history with the S10 Plus accounting for 57 percent of sales. 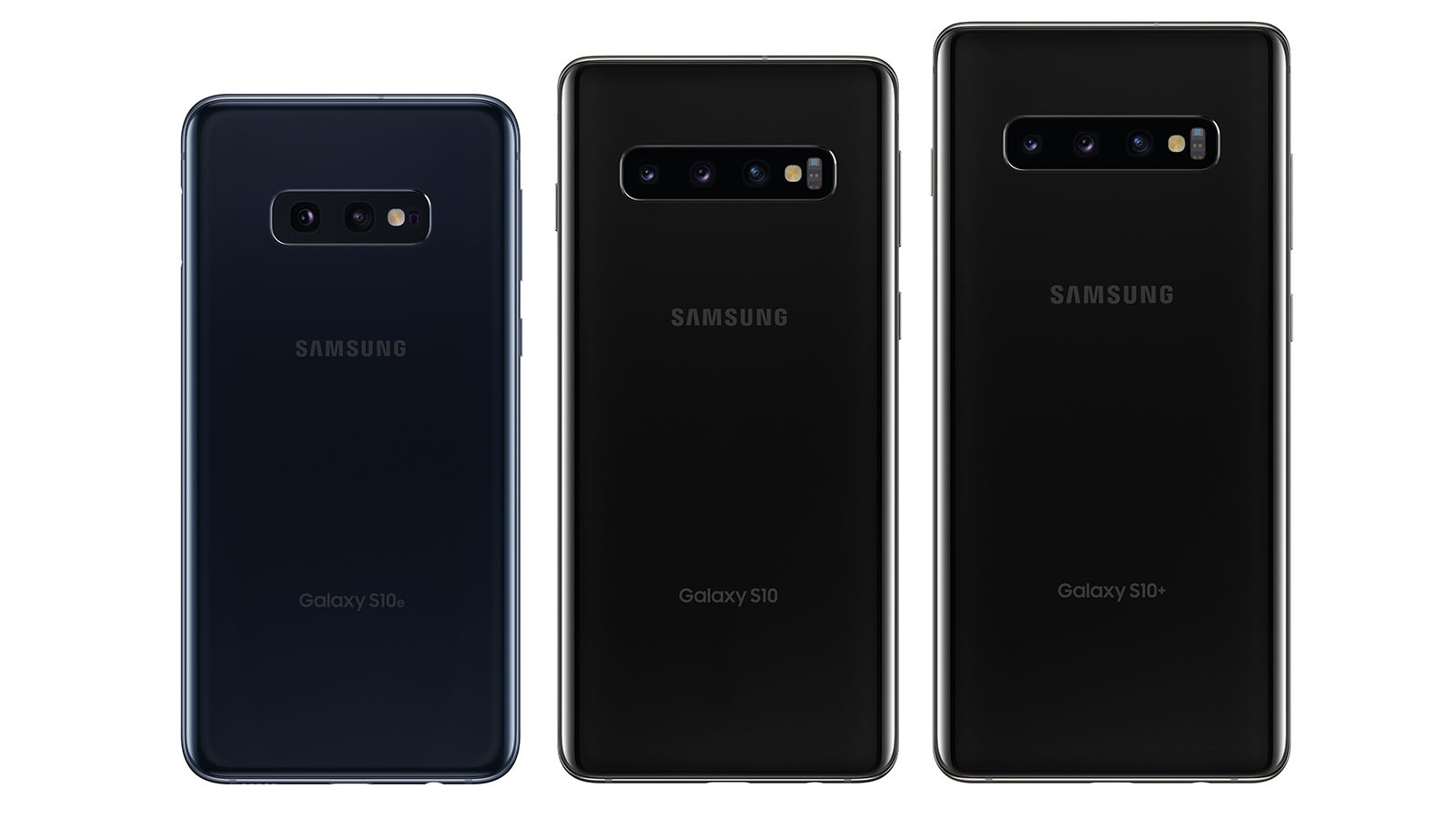 You can also get a feel for the Galaxy S10 at the new Galaxy Studios. 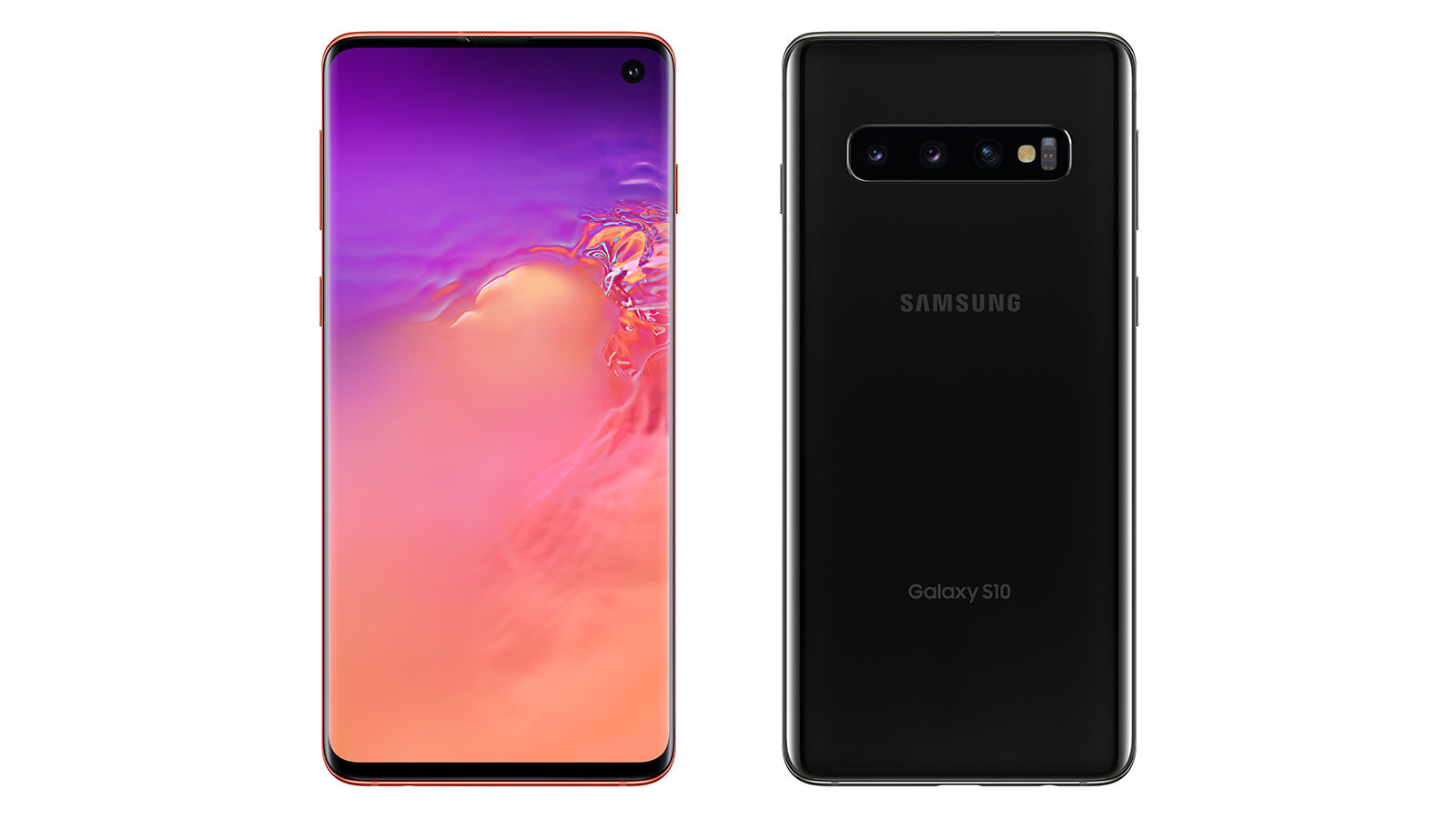 The standard Galaxy S10 is a huge improvement over the S9, and we think well worth the upgrade. It’s instantly recognisable as a S-series flagship, yet Samsung has managed to push the boundaries further and improve upon what was already a great-looking phone.

With a larger 6.1in screen it’s a bit bigger than its predecessor, but both thinner and lighter. Samsung has revamped the front of the device, with a new colour-soaked AMOLED Infinity-O panel devoting maximum surface area to usable screen space (now up to 93.1% screen-to-body ratio), and an integrated super-accurate ultrasonic fingerprint sensor. At the back it’s moved the camera module from a vertical to a horizontal position, and added two extra camera lenses.

The new triple-lens camera module comprises the existing 12Mp wide-angle lens with a variable aperture of f/1.5-2.4 with 16Mp, f/2.2 ultra-wide and 12Mp, f/2.4 telephoto lenses. The camera app has also been updated, and we’re looking forward to giving it a whirl.

You’ll be pleased to note the 3.5mm headphone jack remains in place, making Samsung one of the few phone makers who has not taken the plunge with USB-C audio. It also retains the IP68 waterproofing. The only casualty we’ve found on the hit list is the biometric iris-scanning tech, and the Galaxy S10 now supports only 2D face scanning.

Depending on where you buy the Galaxy S10 you’ll get either the 8nm Exynos 9820 (UK and Europe) or 7nm Snapdragon 855 (elsewhere) chip. Both are devilishly fast, with the latter promising a 45% processing- and 20% graphics boost over last year’s 845.

Battery life should also be better, with the S9’s 3,000mAh cell upgraded to a 3,400mAh battery that supports fast wired- and wireless charging over USB-C.

All three Galaxy S10 models support wireless power share, which allows them to wirelessly charge other compatible phones. It’s probably a gimmick, but we’ll reserve judgement for now – especially since it can also be used to power up the Galaxy Buds.

Storage and memory options have been bumped, with 8GB RAM and 128GB storage as standard, and 512GB optional. MicroSD support lets you add a further 512GB.

Also new to the Galaxy S10 is Samsung’s revamped One UI, a custom interface applied to Android 9 Pie. It’s massively simplified over previous interfaces, and makes one-handed use a cinch. 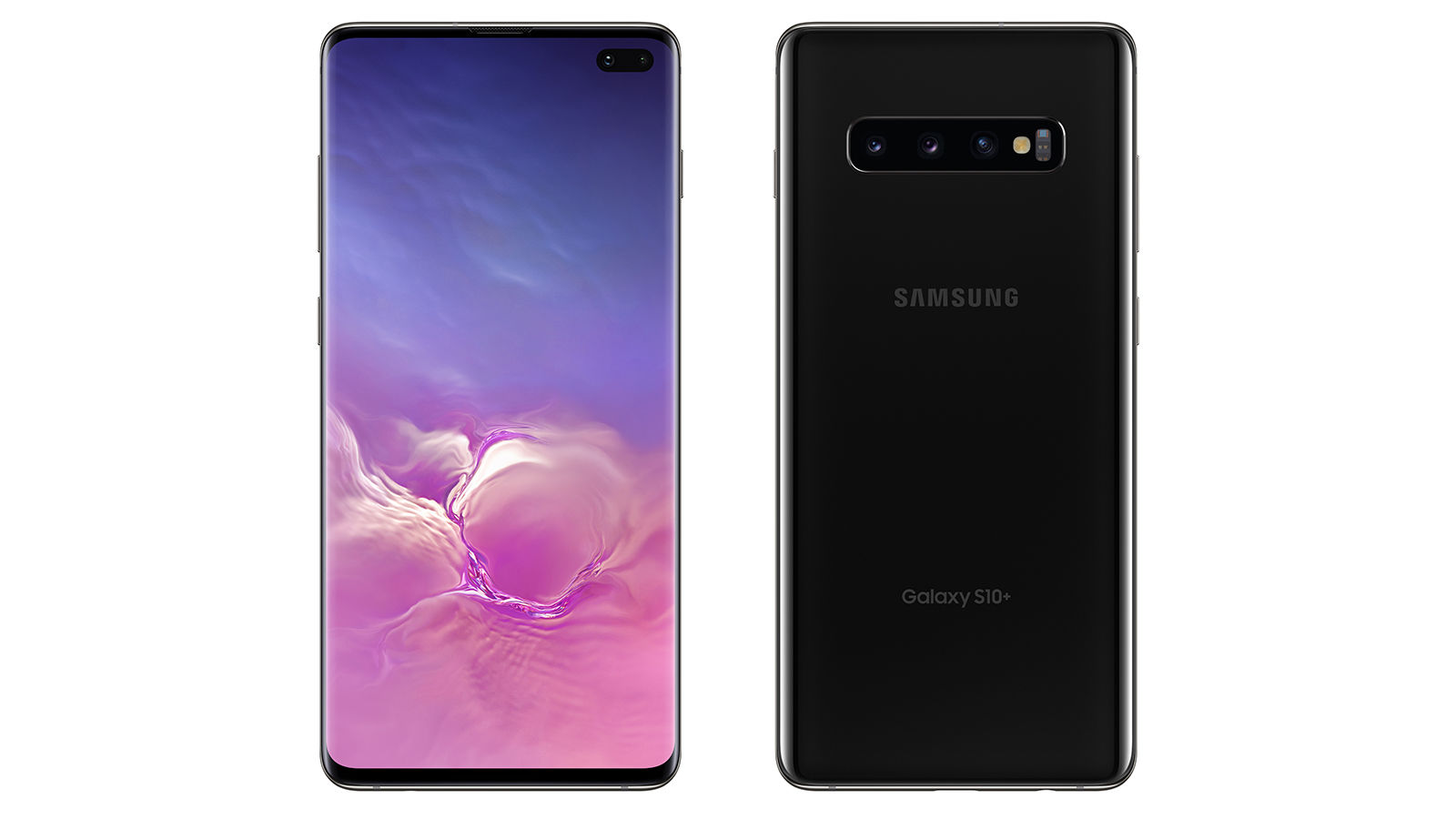 Ignoring for now the 5G Galaxy S10, this Plus model is the largest in the line-up. It has a 6.4in Quad-HD+ display, which means it has a slightly lower pixel density than the standard model with 438ppi against its 550ppi. It’s still incredibly clear, of course.

The panel is to all intents and purposes the same as that used by the standard S10, except you’ll notice it has a larger cutout for the selfie camera. This is because the S10 Plus adds a second camera to the front, complementing the existing 10Mp, f/1.9 lens with an 8Mp RGB sensor that enables depth sensing.

At the rear you get the same setup as on the standard S10, with the triple-lens camera and heart-rate sensor to the side. And it features the same ultrasonic in-display fingerprint sensor as its brother.

With a larger screen the S10 Plus is naturally larger and heavier than its siblings, but no chunkier at 7.8mm. If you opt for the Ceramic version it weighs in at 198g, but the standard colour options are a lighter 175g.

A bigger body means good things in terms of battery power, of course, and the S10 Plus is fitted with a 4,100mAh cell that’s 1,000mAh higher in capacity than that of the S10e and 700mAh higher than the S10. It, too, supports fast wired and wireless charging.

Whereas the standard S10 maxes out at 8GB of RAM, the Plus model is also available with a staggering 12GB of memory if you plump for the Ceramic model. It also goes all in on storage, adding to the 128GB and 512GB options with a massive 1TB available to that special edition. And you can boost this by up to 512GB using microSD. 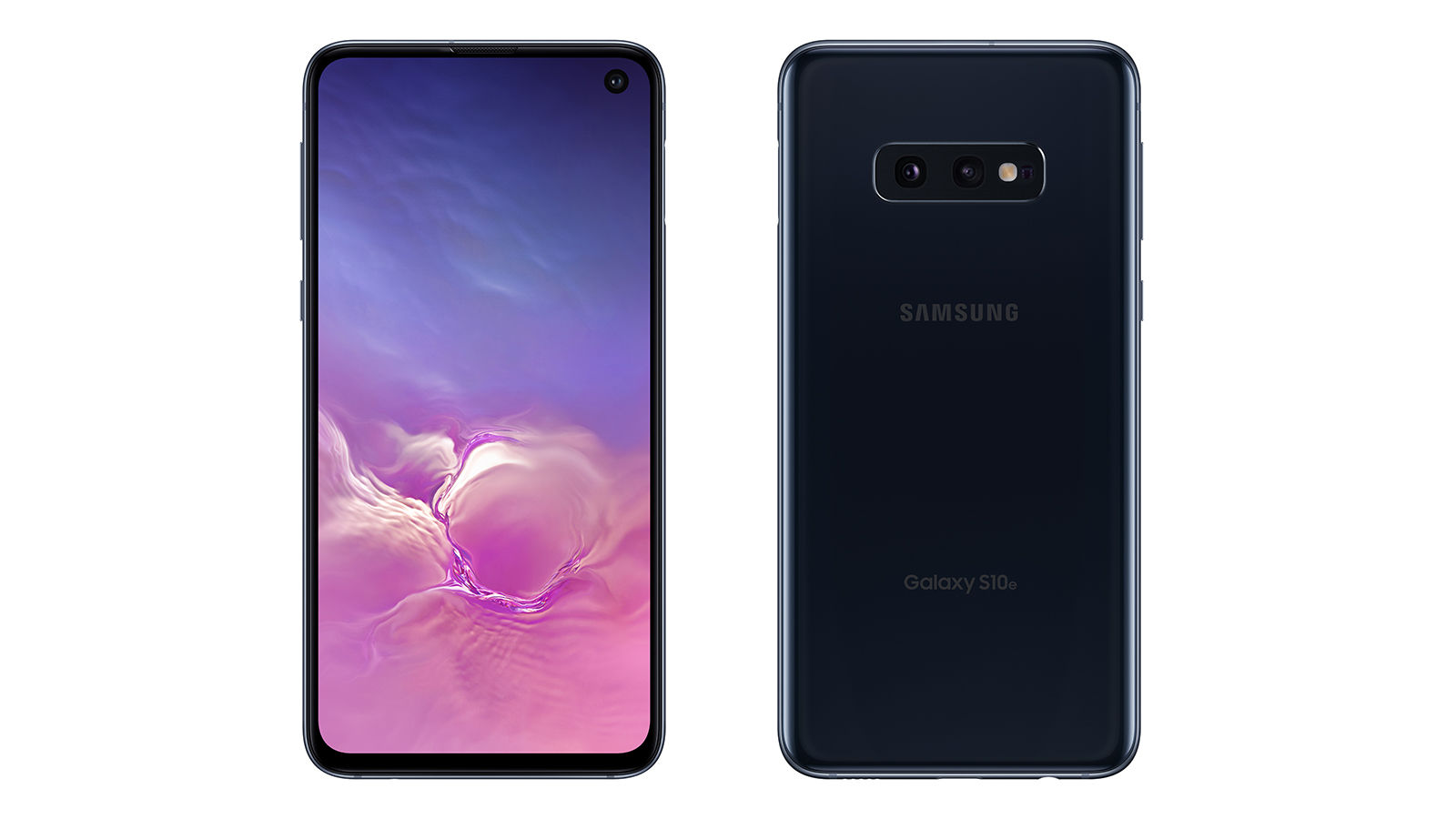 You’ll notice the Galaxy S10 has has something of a price hike from the £739 retail price of the Galaxy S9, so it makes sense that Samsung has also introduced the cheaper S10e to appeal to those on a tighter budget. But in exchange for the lower price you must make some compromises with this S10e.

It is the smallest of the trio, with a 5.8in display. It’s specified at Full-HD+ resolution, as are all Galaxy S10 models by default, but the others are able to go as high as Quad-HD+. This is a flat display, whereas the others are curved, and has somewhat chunkier screen bezels.

This also means it is the lightest, at 150g, but in order to cram in a 3,100mAh battery (300mAh down on the S10 and 1,000mAh down on the Plus) Samsung has needed to make it ever so slightly chunkier at a still-slim 7.9mm. In common with the rest of the range this battery is charged over USB-C and supports fast wired- and wireless charging.

Rather than the ultrasonic fingerprint sensor built into the display of its brothers, the S10e uses a capacitive model that’s embedded in the power button.

The S10e uses the same processor as its siblings, but it’s paired with 6GB LPDDR4X RAM as standard, with 8GB available as an option. Maximum storage options are also lower, with a choice of 128GB or 256GB. You can always add on more with microSD, and the S10e supports up to 512GB.