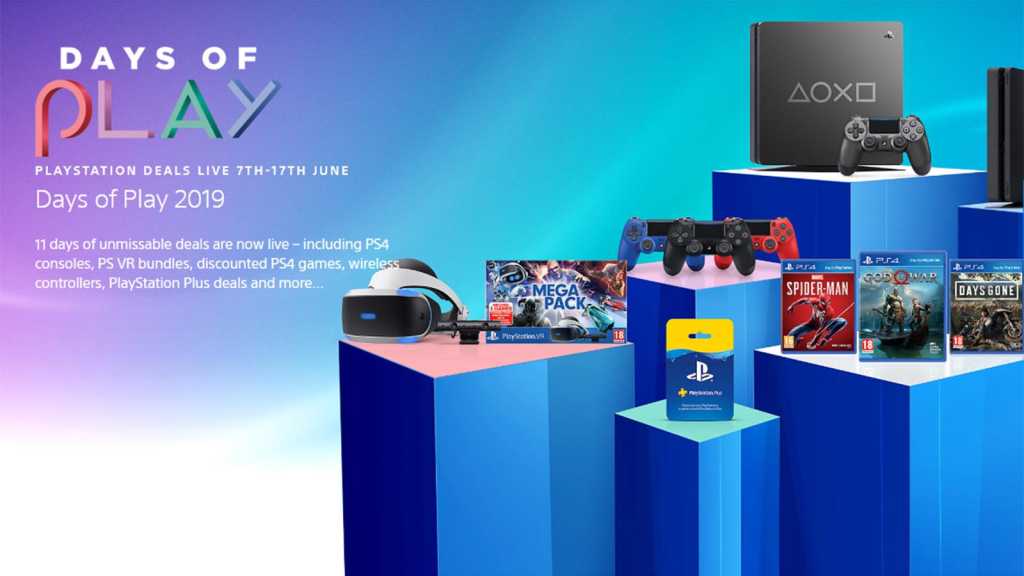 Sony’s Days of Play Sale is back for 2019, offering huge discounts across top PlayStation games and hardware. You can pick up hugely popular PS4 games at a discount, or pick up a cheap PlayStation VR deal to enhance your gaming experience. And even if you don’t want to spend your hard-earned cash, there’s a way for you to win a huge PlayStation bundle simply by playing your PS4.

We’ve got all the details about Sony’s Days of Play Sale, including dates, best deals and competition details.

When is the PlayStation Days of Play Sale?

Sony’s PlayStation Days of Play Sales are legendary amongst PS4 gamers, providing a great way to pick up games you might’ve missed the first time around with heavy discounts applied.

It’s not only for games on the PlayStation Store either; the Days of Play Sale provides discounts across hardware, with Sony offering cheaper PS4 and PSVR bundles than ever before.

What are the best Days of Play Sale deals?

Sony will be releasing a plethora of discounts across the Days of Play event, with many found on the Sony Days of Play website. We’re also seeing deals from retailers like  Amazon, Argos,  GAME,  ShopTo, VERY, Smyth, AO, and John Lewis.

But with so much on offer, it can be hard to find the best deals available.

Don’t worry, we at Tech Advisor have scoured the Days of Play site and other retailers, and have found some of the best deals for PS4 games, subscriptions, and hardware around. Here are some of the highlights:

Let’s start with PlayStation VR: since launching back in 2016, PSVR has steadily dropped in price, making high-quality VR more accessible to the millions of PlayStation 4 owners around the world.

Right now you can get the PS VR Starter Pack with Blood and Truth for £179.99, or the PS VR Mega Pack, for £209.99 (see all retailers offering this deal). The Mega Pack also includes Blood and Truth along with five other full games: Astro Bot Rescue Mission, DOOM VFR, The Elder Scrolls Skyrim VR, WipEout Omega Collection, PS VR Worlds.

For those unaware, the Starter Pack comes with the PlayStation Camera alongside the headset, a required component for VR use.

Considering the PSVR headset launched at £349 without any games or even the PlayStation Camera, it’s the perfect time for interested gamers to jump into the world of VR without blowing the bank.

But what about games? The Days of Play site has linked to all retailers carrying its PS4 games on offer – apart from just the PlayStation Store that is. We’ve browsed through options to find the the best prices and availability below:

Right now Days Gone is available for £34.99 from Argos and £39.99 from Amazon (which is bundling a Limited Edition SteelBook as well). You can pick up the game from these retailers as well.

You can also pick up PlayStation Hits from £11.99 from the following retailers.

You’ll need to sign up to PlayStation FC with your name, email and date of birth. Good luck!