Following an hours-long livestream of nothing but a Fallout-themed Standby message, Bethesda finally announced Fallout 76 in early 2018. But while fans of the RPG series were hoping for the next instalment in the open-world single-player game, Bethesda revealed that the game is something else entirely.

Here’s everything we know about Fallout 76, from release date and beta details to the latest gameplay news and trailers.

While no release date was provided alongside the initial announcement of Fallout 76, Bethesda took to the stage at E3 2018 to announce more details about the game – including the release date. Fallout 76 will be released on 14 November 2018, and will be available on PS4, Xbox One and PC.

If you’re eager, there will be a chance to play the game before that, however. Bethesda has announced that the game will have an open beta starting on 23 October, accessible to all players who pre-order the game.

Xbox One players will get access first, on 23 October, followed by those on PC and PS4 a week later, on 30 October. The servers won’t be live 24/7 as the devs troubleshoot issues, stress-test the servers and optimise performance, with specific details to be announced closer to the time.

The good news is that your progress from the beta will cross over to the full game at release. It’s not very often that this happens, and it’s possible because unlike other beta tests, the game you’ll be playing is the finished product due for release in November. How handy.

The latest trailer gives us a look at the first steps that vault dwellers will take upon leaving Vault 76 and venturing out into Appalachia.

Vault 76 has been referred to in both Fallout 3 and Fallout 4, but we never got to see the famed vault. Most importantly, Vault 76 was one of the ‘control vaults’ (i.e. a vault with no human experimentation) that was meant to keep its 500 inhabitants healthy, alive and sane in order to repopulate the world.

Back in Fallout 3, Vault 76 was listed on a Vault-Tec terminal in the Brotherhood of Steel’s Citadel, and was also mentioned on an audio log found on an alien ship in the Mothership Zeta DLC. The audio log contains the voice of Giles Wolstencroft, the then assistant CEO of Vault-Tec, explaining that he was inspecting the construction of the famed Vault 76 when he was abducted.

In Fallout 4, it’s mentioned in the news in the beginning scenes, with the reporter noting that it was due to make its debut in honour of America’s tercentenary. 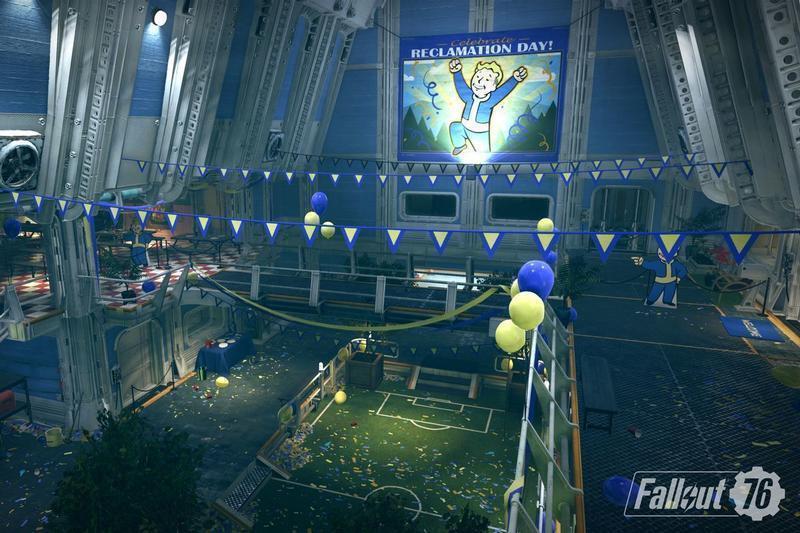 Fallout 76 will take place in West Virginia and will follow the story of the very first survivors venturing out from the vault following the nuclear fallout.

You’ll have six regions to explore, each filled with unique new creatures and different environments. Though we haven’t got much information about the animals we’ll come across and exactly how different the regions will be, what we do know is that the open-world Fallout 76 map is four times larger than that of Fallout 4, meaning there is a lot to explore and discover.

Bethesda has also confirmed that it is an online survival game, though described it as a “soft-core” survival game, designed to be a little easier for casual players to join in, as opposed to hardcore survival games like Rust and Ark: Survival Evolved where you need to play all day, every day to survive.

The company revealed more about what that means at QuakeCon 2018 during a panel and fan Q&A which you can watch below:

The game will employ a camp system similar to that in Fallout 4, allowing you to build your base and survive the harsh wilderness. One of the ‘softcore’ elements is that while your base can be destroyed, you can ‘blueprint’ your buildings, making them easy to reconstruct if they’re destroyed, or if you simply want to deconstruct and move your base elsewhere on the map.

One of the ways your base can be destroyed is by the Nuclear Missile Camps throughout the world, which can be used to launch nuclear missiles and destroy enemy player camps. They’ll also change the enemies and loot available on the map.

Just as the loss of your camp is designed to be challenging, but not punishing, the same is true of player death. You’ll apparently keep all of your equipment and caps (the Fallout currency) and will only lose your ‘junk’ – the resource used to upgrade buildings and equipment. This will stay where you died, so after each death you’ll have to decide if your junk is worth risking a return for.

You also get to choose where you respawn, with free respawns at Vault 76 or near where you died, and the option to pay caps to respawn at other locations, with the cost rising the further away from your death point you want to spawn.

S.P.E.C.I.A.L. stats and Perks are returning, to no-one’s surprise. Each time you level you’ll get one point to put into a S.P.E.C.I.A.L. stat – with a level cap of 50 – and for each point you can assign a certain Perk. Those perks are swappable on the fly, meaning you can tweak your build for PvE or PvP depending on the day, though there are also more permanent changes called mutations which kick in at certain levels of radiation, and can have both positive and negative effects on your stats.

Finally, let’s break down how the PvP is going to work. The good news is that it’s mostly optional: anyone can attack you at any time, but that first attack will only do very minor damage. If you want to fight back, you attack them in return, and from that point on you both deal full damage. Winning the fight nets you caps and experience points. PvP only starts from level 5 onwards, and gives you options like flagging yourself as a pacifist, or blocking other players to prevent any sort of interaction.

If a player somehow manages to whittle down an opponent and kill them with the minor damage they can deal in unreciprocated PvP, they won’t actually get any reward for the effort. Instead, they’ll be flagged as a wanted murderer, which is bad news. Suddenly they won’t be able to see other players on the map, but those other players will be encouraged to hunt them down for extra rewards, in a mechanic that Bethesda says “turns assholes into interesting content.”

You can watch the first gameplay trailer below, first showcased at E3 2018, to see what Fallout 76 has to offer.

With Sony now warming up to cross-platform support, many have been asking whether Fallout 76 will support cross-platform play, allowing PS4, Xbox One and PC players to play together in the vast open world of Virginia.

Sadly, Bethesda’s Pete Hines has shot down any hopes of that happening. In response to a fan on Twitter, Hines confirmed that there will be no cross-platform support at launch, and that it isn’t currently planned for post-launch.

Folks, chill. I work with a lot of devs and games for whom this is important going forward. Fallout 76 does not support crossplay, for a number of reasons. I have no idea if it ever will. But I assure you it is not on our radar right now as we focus on B.E.T.A. and Launch.