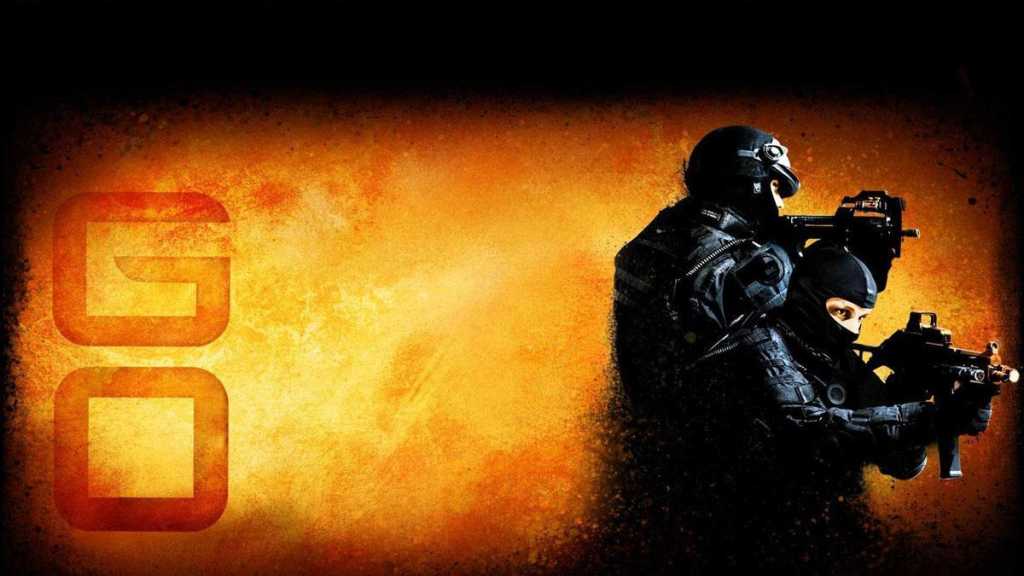 Counterstrike: Global Offensive is a hugely popular first-person shooter, but it’s not as welcoming to new players as games like Battlefield and Call of Duty. CS:GO is tough, especially when you don’t know what to do or when to do it.

Don’t give up though; we’ve played a lot of CS:GO, and here are our top tips to help new players get started and potentially give you an advantage.

Knowing what to buy and when to buy it

There’s a lot to break down here, but bear with us, as learning about rewards and the weaponry available can be the difference between life and death in casual and competitive CS:GO matches.

When you lose a round, you will get:

When you win two rounds in a row and then lose you get:

When you get into a game, you’ll have different starting amounts ($800 for casual, $100 for competitive). In casual, you will always have armour and a helmet so you don’t have to worry about that.

The same can’t be said about competitive matches though; you won’t have armour and you will need to buy it. Once you’ve bought your armour, you’ll have to replenish it as it gets damaged in combat. It costs $650 for your armour, and $350 for the helmet.

There are four main categories of guns, and each gun has a different price. 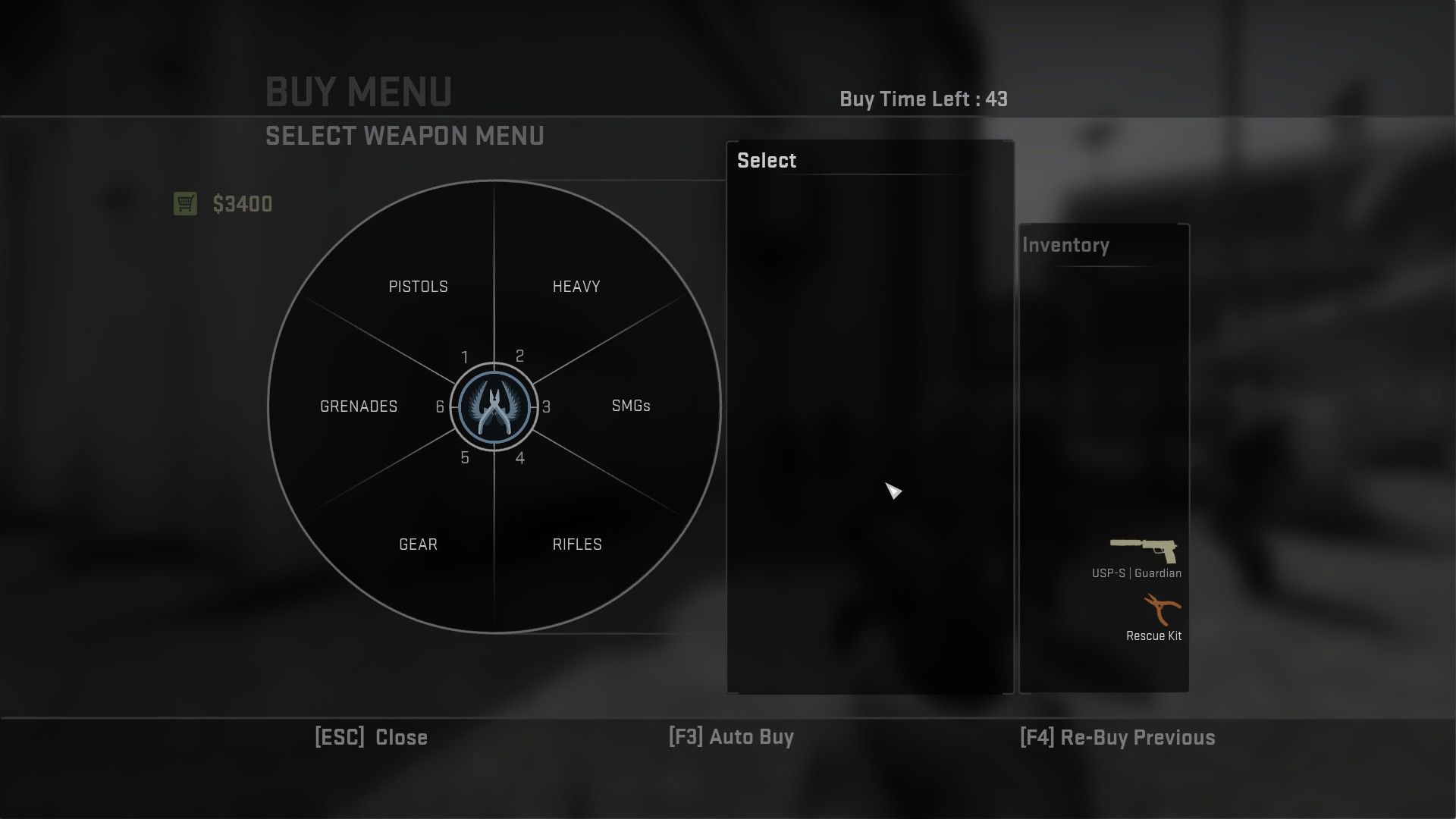 Each gun costs a different amount so it’s worth thinking strategically, considering what you want versus what you need so that you have a bit of money left over should you need it. 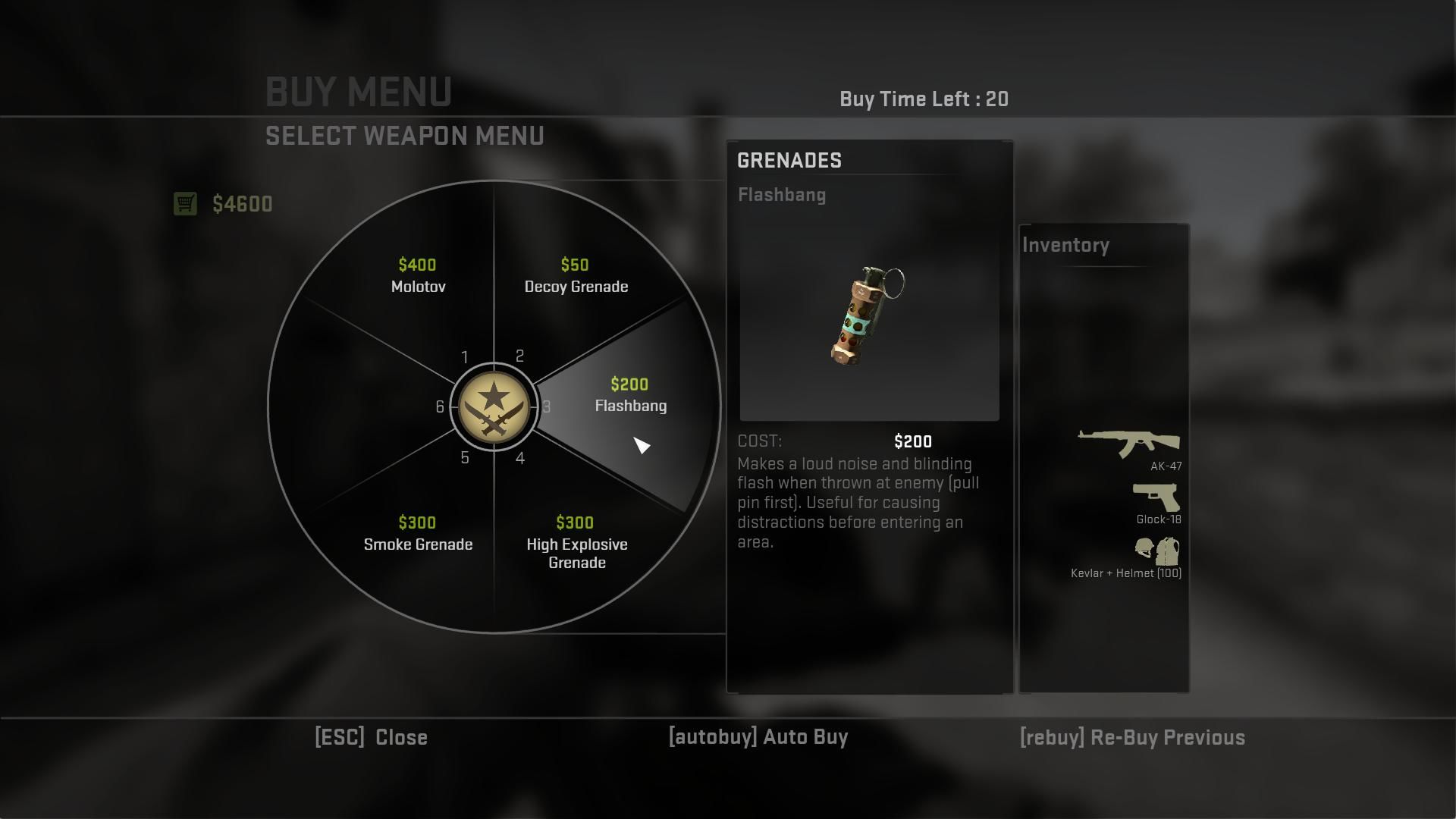 The different types of grenades are:

The flashbang is used to impair the enemies (and If you’re not careful you or your teammates) vision. You can then use this to your advantage to catch the enemies off guard and defenceless so then you can push and kill them.

The smoke grenade is used to block the vision of you and the enemies. You can use this to your advantage to block off an open area from a doorway, or to block a window so you and your team don’t get sniped. Be careful though, as you can still shoot – and be shot – through the smoke.

The HE (High explosive) grenade is good to deal up to 70+ damage to enemies, or just to discourage them from a push. Being hit by a grenade can be annoying for the enemy, as a well-placed grenade can cause high damage and force them to stay back.

Like the smoke grenade, these can be used to stop the enemies pushing through or to discourage them from running to you. But again, you can still shoot through the smoke and flames produced. Sometimes, you might even come across a Terminator-inspired enemy that doesn’t care about health loss and will follow you through the flames.

It’s not advised though, as the Molotov/incendiary can do up to 40 damage per second.

The decoy reproduces the sound of the gun you are holding, and can be used to trick the enemies into believing you’re somewhere that you’re not – the perfect distraction.

As you can see, the list of weaponry on offer is large. You have to manage your money well so you can afford a gun, some grenades and armour for yourself and, if need be, a gun for a teammate too.

The most important tip, rath obviously, is to make sure your shots count and that you’re hitting the enemies you come up against. When you fire a gun it’ll shoot in a pattern.

The best way to control where your bullets are firing is to reverse the pattern by pulling the mouse down and either to the left or the right. Every gun in the game has a different pattern so it can be hard at first to learn them all.

Recoil control is essential when trying to kill enemies from a distance as it allows you to focus the bullets into one spot.

There are many custom maps that you can use to help with your recoil control, if you need a bit of practice. 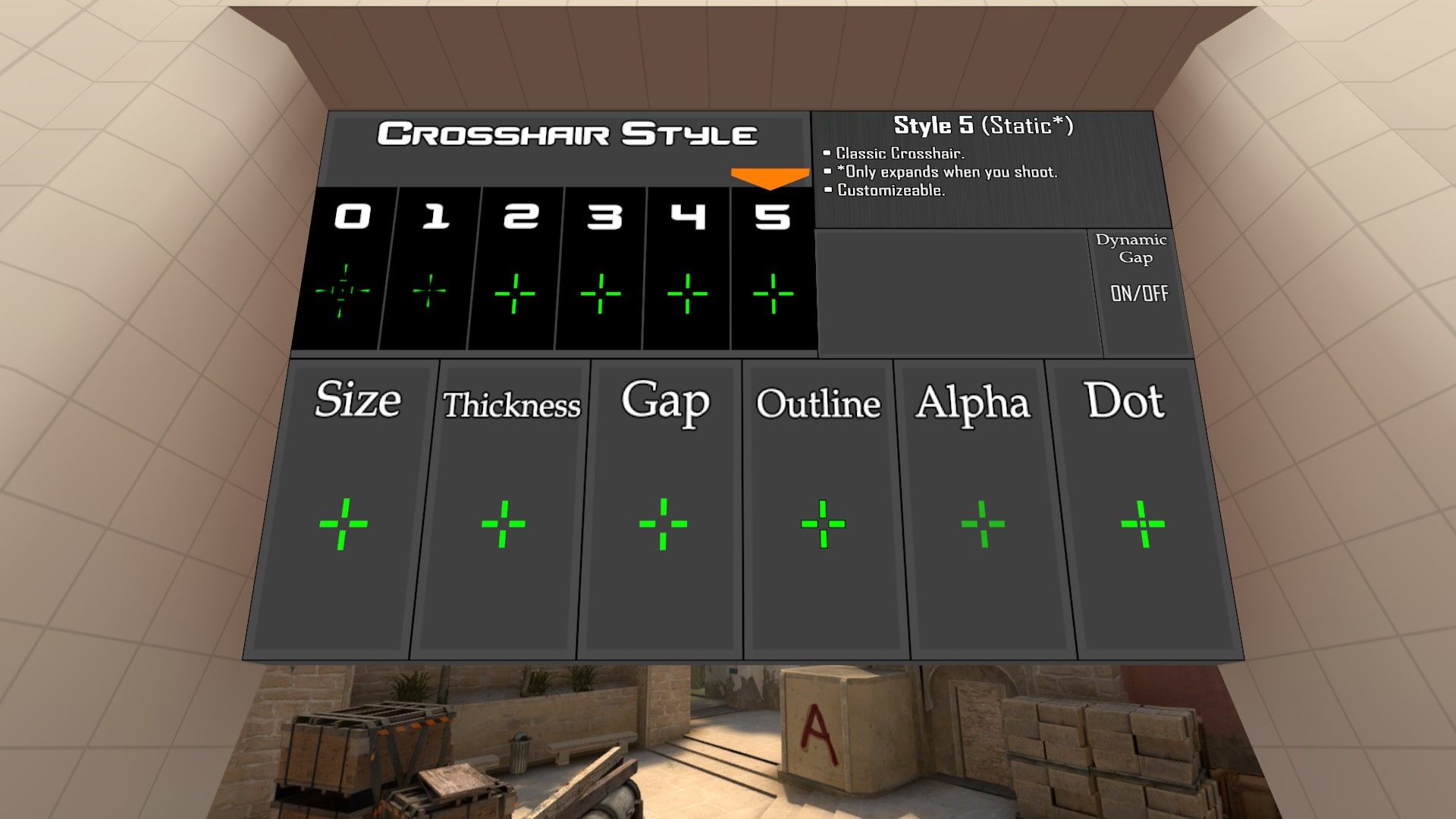 A good crosshair is useful as it can help you to place your crosshair on to the enemy and kill them. We recommend going for a dot so you have a really precise point to aim at to the enemy. Other people go for the generic cross as it is a bigger target and can be placed on an enemy a lot quickly and with more ease, but it’s less accurate.

The crosshair is very important as you want to have some indication of where your gun is going to hit and where you are looking. You need balance the visibility of your crosshair, so not having one that takes up 40% of the screen, and the efficiency of it. You want one that can work well for you and one you’ll be able to get used to.

Good mouse sensitivity is vital. You need two make sure you have a good sensitivity so you can move your mouse to move your cross hair where the enemy is, quickly and smoothly.

There are videos online and guides you can follow, but remember, you’re in control and you can choose what ever you feel you’re comfortable with.

And like with recoil control, there are custom maps that help you with getting used to your sensitivity. 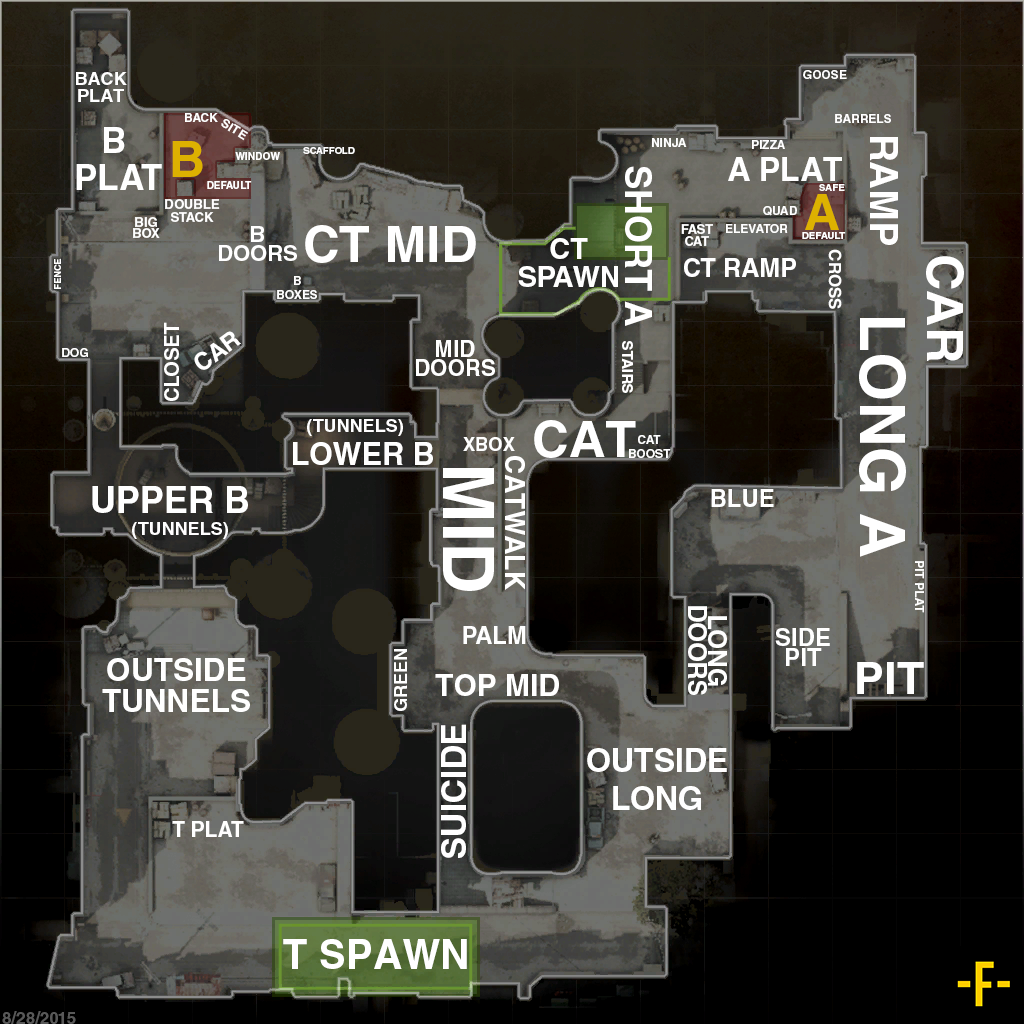 Map callouts are really important. It helps your team instead of shouting “He’s over there!”

Callouts are useful as it allows you to communicate with your team either where they are, where you are or, most importantly, where the enemies are. It is a good idea to get to know the locations of map callouts. You can play with others and ask, or take the time to look online and memorise the callouts for the various maps.

It is advised to not keep changing the crosshair and the sensitivity as it can be bad for you when you are playing. Once you have found a good sensitivity, stick with it so that your brain and muscles can adjust, and the same goes for the crosshair.

CS:GO is tough and aiming will be difficult initially but trust us, stick with it and after a while, you’ll notice improvements.

If you are unsure about a position you play, it is good to watch pro players who play in that spot to get a feel for how they do it.

Most importantly; you will have bad days! Everyone does. Don’t let the bad days get you down. Persist, keep going and have fun!