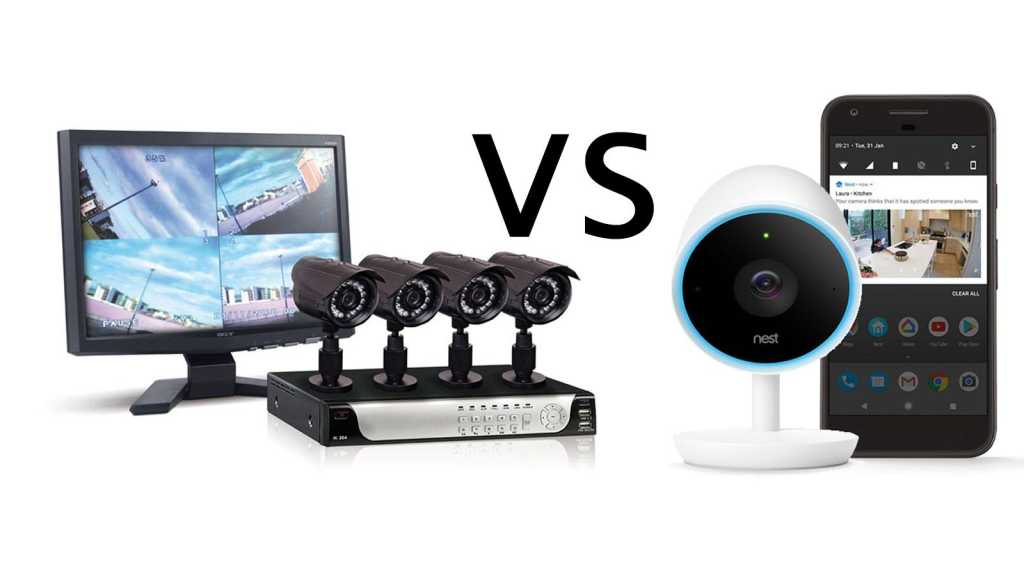 Home security cameras are more popular than ever. But should you buy one or two Wi-Fi ‘internet’ cameras or a traditional CCTV system? We’ll answer this question and more.

What’s the difference between CCTV and a Wi-Fi camera?

CCTV stands for closed-circuit television. For home security it means that you can watch the video feed from your camera(s) on a normal PC screen or TV and that footage is – typically – recorded constantly.

With a CCTV system you can go back to any point in time (limited only by the amount of storage in the recording system) and watch what happened.

All CCTV cameras should have night vision, but not all record sound. Most are also outdoor cameras, so are water-resistant. Some systems let you choose between continuous recording and motion-detection recording.

Video is recorded to a hard drive and the cameras are connected to the main box by long cables. That main box – in modern CCTV systems – will have a network port so you can connect it to your router with an Ethernet cable.

This allows you to view the live feeds remotely on your phone, get alerts for motion and review recorded footage.

Despite this remote access, there should be no subscription costs to pay: it’s on the initial purchase of the system you need to budget for.

One of the disadvantages of CCTV, specifically the type which uses wired cameras, is that you may have to pay to have them professionally installed if you can’t drill holes in your walls, mount the cameras and route the wires through your home yourself.

You can read our review of the Swann thermal-sensing CCTV system.

The alternative to CCTV is a Wi-Fi camera, also known as an IP camera or network camera. These are usually sold singly and connect to your router via Wi-Fi.

Instead of recording to a local hard drive, they tend to record to the cloud – usually the camera manufacturer’s own servers instead of Dropbox or another cloud service.

Most record video only when motion is detected. This puts less of a strain on your broadband connection, and costs less than recording video constantly.

One notable exception is Nest cameras which do record continuously. This is one reason why Nest’s monthly subscription costs are quite high. But it’s also important to remember that the amount of video your cameras send across your broadband connection multiplies as you add more cameras.

Just one Nest IQ camera (pictured above) can use up to 400GB per month at the highest quality. That requires an upload speed of 4Mb/s, but this is an extreme case. However, it is important to test your broadband upload speed because for anyone with ADSL, your download and upload speeds will be different and upload speeds can be much, much slower than download.

Most Wi-Fi cameras which record video only when they detect movement don’t consume so much data but if you want to watch live video remotely (on your phone, for example) you’ll still need a certain upload speed to transmit that video without it stuttering or buffering.

Not all Wi-Fi cameras record to the cloud, with some recording to a microSD card, such as the £85/US$99  EZVIZ Mini Plus. Others allow you to record to your own NAS drive, but this is rare to find.

Another feature some Wi-Fi cameras have is two-way talk. Not only do they have a microphone for recording sound, but also have a built-in speaker that lets you use it as a sort of intercom via the app.

Here are the best Wi-Fi cameras to buy.

Which type of security camera should I choose?

There are a few things to consider here. The first is how many cameras you need. If it’s four or more, you’ll almost certainly find CCTV to be more cost effective.

You’ll find bundles containing the recorder box and multiple cameras, and it’s usually possible to add more cameras later as long as the box has spare inputs. For example, if you buy an 8-channel system with four cameras, you can add another four later.

Wi-Fi cameras are coming down in price, but some still cost as much as £250/US$299 each. The cheapest cost around £50/US$50, but these may have lower resolutions, poorer quality lenses and fewer features.

This is why it’s important to read reviews of any camera or system you’re thinking of buying as specs won’t necessarily tell you how good is video quality, nor the effectiveness of any motion-detection system. Some can be triggered by changes in the light or trees swaying in the wind, but the best will alert you only when something you’d actually care about is happening.

The bottom line is that Wi-Fi cameras are easy to install and use, but most record only when motion is spotted. Many are also indoor models, so if you need to monitor what’s going on outside your home, you’ll need a specific outdoor camera. Pointing an indoor camera out of a window will work during the day, but at night all you’ll get is a reflection of the infrared LEDs.

CCTV systems tend not to have any ongoing costs, record continuously and don’t clog up your internet connection. But they’re more difficult to install and some don’t offer as many features as Wi-Fi cameras (such as two-way talk).