When Jurassic World arrived back in 2015, it brought with it a new park, new dinosaurs, and a new star – in the form of Chris Pratt, fresh from wowing us all in the first Guardians of the Galaxy.

It also brought with it more than a billion dollars in box office receipts, rapidly becoming the third biggest film of all time – though it’s since been overtaken by Star Wars: The Force Awakens, and will probably soon slip to fifth as Avengers: Infinity War carries on making the big bucks.

Naturally, in Hollywood that means sequels, so it wasn’t long before Jurassic World 2 – later given the subtitle Fallen Kingdom – was announced. Chris Pratt and Bryce Dallas Howard are back, along with a few new faces and one very important old one, as they have to go – would you believe it – back to the bloody park. Again.

Read on to find out more about the film, find out if the film has a post credit scene, or head to our Jurassic World 2 review to read what we think of it.

Jurassic World 2 wasn’t in cinemas that long ago, but we’re already looking ahead to the film’s home entertainment release, when we’ll be able to re-watch to our hearts’ content on DVD, Blu-ray, or digital. The film is available now in the US on digital formats and  Blu-ray and DVD, and after a bit of a delay it’s arrived in the UK too, with the digital version here and the disc version here.

Here are the special features we’re expecting to see, with the caveat that they will vary by format and region:

If you’ve forgotten what happened in the last one, you might want to re-watch Jurassic World before heading to the cinema for the sequel. You can grab the DVD/Blu-ray from Amazon, or just pick up a download from iTunes or the Google Play Store.

The really keen may want to go back and re-watch the original three Jurassic Park films too – luckily enough, there’s a box set for that. Universal is even planning has released a new giant five-film boxset containing the whole series to date.

It’s also worth remembering that there’s a new videogame out to tie in with the Fallen Kingdom release too. Jurassic World: Evolution is a theme park simulator that lets you build your very own dinosaur park, and hopefully keep it intact for just a little bit longer than they’ve managed in the films so far.

Check out our guide to all the biggest and best movies coming out this year to see what else is on the way.

To absolutely no-one’s surprise, Chris Pratt is back as Owen Grady, joined by Bryce Dallas Howard’s Claire Dearing as the two returning leads from Jurassic World.

They’re not the only returning faces though. None other than Jeff Goldblum is back, after roles in the first two Jurassic Park movies, as the inimitable Ian Malcolm, most famous for spotting that life, uh… finds a way. Having seen the film, we’ll warn you though: this is more of a cameo than a serious return to the series.

Elsewhere the likes of James Cromwell, Toby Jones, and Rafe Spall join the cast, along with the brilliantly named Justice Smith – best known for Netflix series The Get Down. Series staple BD Wong is also back as scientist Henry Wu, but there’s no sign of either of the two kids from Jurassic World, you may be pleased to hear.

Things have also slightly changed behind the camera. Original director Colin Trevorrow is gone, but still contributed the film’s script, along with Derek Connolly (who had a hand in the first film’s screenplay too).

Trevorrow’s directorial replacement is J.A. Bayona, whose big break was Spanish-language horror The Orphanage. He’s since gone on to more effects-heavy movies like tsunami drama The Impossible and the brilliant coming-of-age/giant-tree-monster movie A Monster Calls.

There have been five official posters for Jurassic World 2, which you can see below. One oddity worth noting is the taglines: the US posters tend to adopt the rather dark ‘The Park Is Gone’, while UK variants of the same posters opt for the cheerier ‘Life Finds A Way’.

It’s definitely worth clicking through to check out the film’s fifth and final poster: designed by a fan in collaboration with Fandango, it subverts Hollywood poster stereotypes to produce a design that recognises this movie’s real stars. 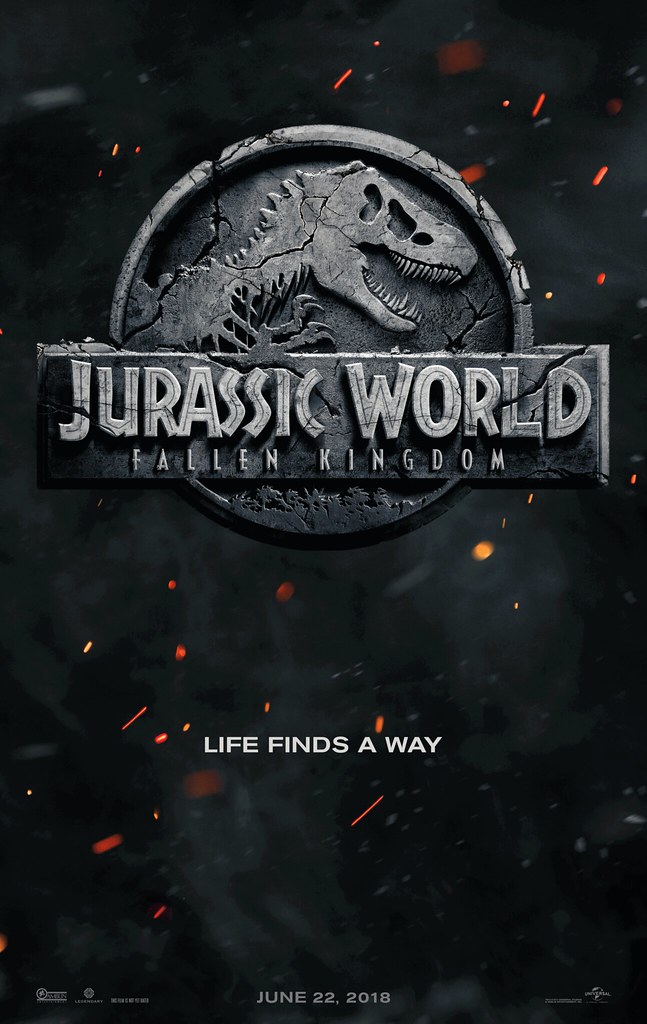 There’s also a decent selection of official images from the film, mostly made up of scenes that have featured in the trailers so far, showing off a few of the main characters (Goldblum!) and a couple of the new films big beasties. Click through the gallery below to check them out:

There have also been three full trailers for the film. The first came back in December 2017, and focuses on the initial thrust of the film’s plot: a mission to return to the island to save the dinosaurs from a volcano eruption. What could go wrong?

Then came trailer two, which teases what comes after the rescue op: new genetic hybrids, a dinosaur auction, and a particularly nasty new creation stalking suburbia:

Then there’s the final trailer, which takes everything in trailer and amps it up to, oh, 13 or so? It gets pretty nuts:

If you’ve made it through those three trailers, then you probably have a pretty good idea about what to expect from Fallen Kingdom.

Set four years after the first Jurassic World, it sees Owen (Pratt) and Clair (Dallas Howard) recruited for a mission to return to Isla Nublar to rescue samples of eleven dinosaur species after the presumed-dormant volcano on the island turns out to be, well, not so dormant.

It’s pretty clear that isn’t all that’s going on though – Owen is brought in specifically to rescue Blue, the raptor he trained in the first film, and from the looks of the trailers he’ll be used to create a brand-new genetic hybrid dino, which is in turn sold at auction to (presumably) nefarious sorts. Toby Jones looks to be the auctioneer, while Rafe Spall is apparently the big bad behind it all.

This is a Jurassic Park film, so naturally it all goes a bit pear-shaped. The big dino gets loose, and somehow finds itself in a child’s bedroom – all very reminiscent of the T-rex on the run at the end of The Lost World, the first Jurassic Park sequel way back when.