Here, you’ll find out everything you need to know about Nintendo Labo including the release dates and prices for the various different Labo kits, including their features and gameplay modes.

Nintendo has released two Labo kits so far, the Variety Kit and Robot Kit – read our Labo review to find out what we thought of the Variety Kit. The next to come out is the upcoming Vehicle Kit, and here’s what we know so far:

Labo launched with two kits available, but Nintendo has now announced the third: the Vehicle Kit. Due out on 14 September 2018, this new kit will include everything you need to build controls for a car, submarine, and plane, including a foot pedal and multiple ‘keys’ that you can use to switch between mini-games.

The gameplay shown off in the announcement trailer looks more flexible than the Variety Kit, with what looks like an open world to explore, with the ability to switch from one vehicle to another in the middle of gameplay – and potentially even some co-op multiplayer from the look of things.

Nintendo hasn’t yet announced the price of the Vehicle Kit, but we’re expecting it to be similar to the previous two kits, so likely around £60/$70.

How much does Nintendo Labo cost?

So, how much does Nintendo Labo cost? It is made from cheap cardboard as opposed to plastic, after all. The Variety Kit will set users back £59.99/$69.99, while the Robot Kit is slightly more at £69.99/$79.99. As mentioned above, we don’t yet have pricing for the upcoming Vehicle Kit, but expect it to match the Variety Kit.

Those interested can also pick up an £8.99/$9.99 customisation set with stickers, tape and stencils to customise your cardboard kits. 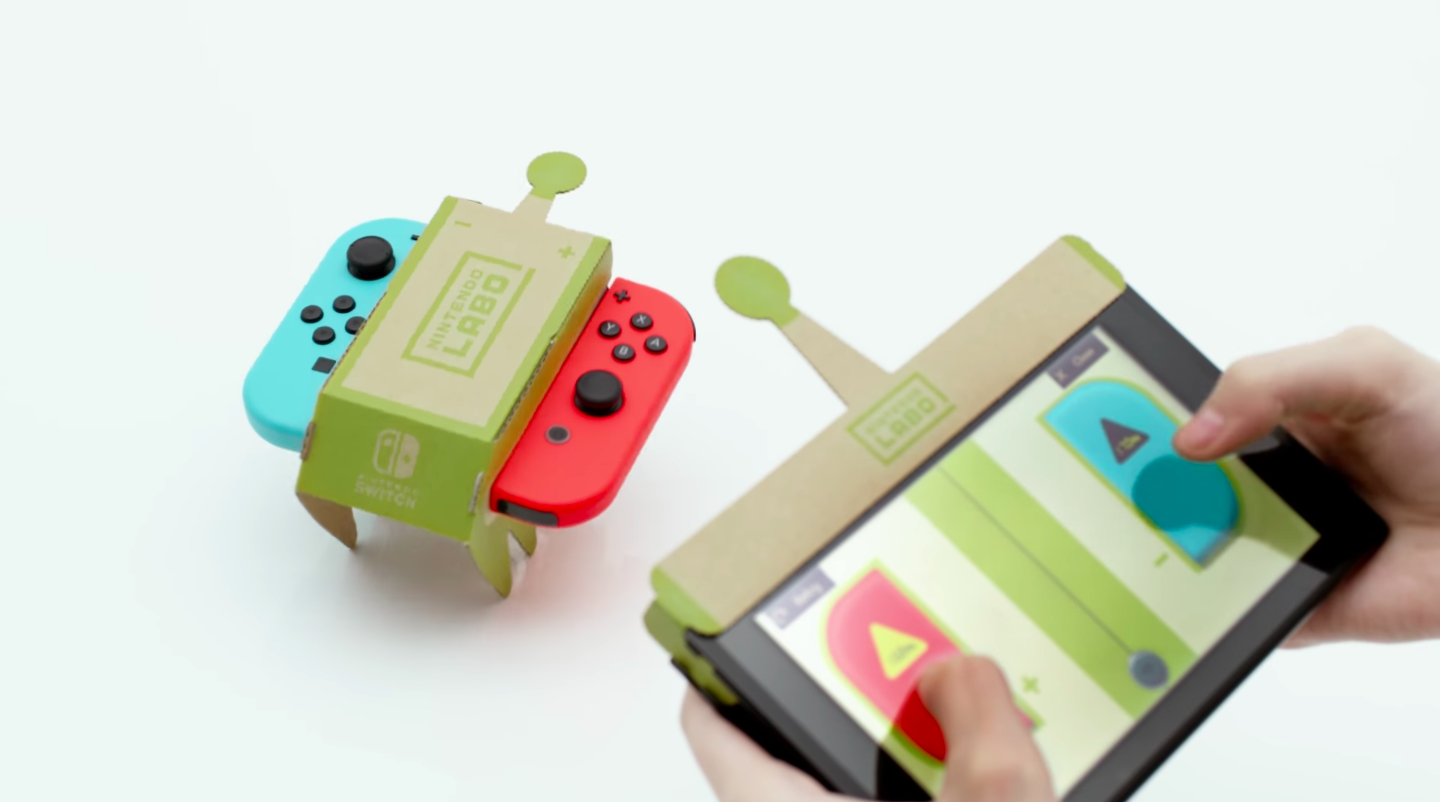 Of course, being made out of cardboard, the Nintendo Labo accessories aren’t the most durable on the market. Prior to launch, this made some fans nervous: would they have to fork out another £60/$70 if they break the cardboard fishing rod, or crush the robo-backpack? Thankfully, it won’t be the case.

It seems Nintendo itself is aware of the low durability of its latest product, and has started offering replacement parts of its’ DIY kit on the Nintendo Store in the US and in the UK. The accessories aren’t that expensive either; spare parts start at only $1.99/£3.49 each.

It’s worth noting that you can’t simply buy replacement parts and hope to have the Nintendo Labo experience – the kits come with a game cartridge containing the software, something not available from the replacement parts section of the store.

What can I do with Nintendo Labo?

The big question is what can you do with Nintendo Labo? As showcased in the reveal trailer seen at the top of this article, Nintendo Labo offers a range of cardboard accessories to enhance your Switch gaming experience.

You simply pop the cartridge into your Nintendo Switch and follow the Lego-esque step-by-step instructions on-screen to build your cardboard accessories. All the accessories are flat-packed to begin with, and can take anywhere from 5 minutes to two hours to install – especially when it comes to the more complex accessories like the telescopic fishing rod or the wearable exoskeleton.

While it sounds pretty cool on the surface, it’s how Nintendo is achieving this level of connectivity using cardboard that is most impressive. 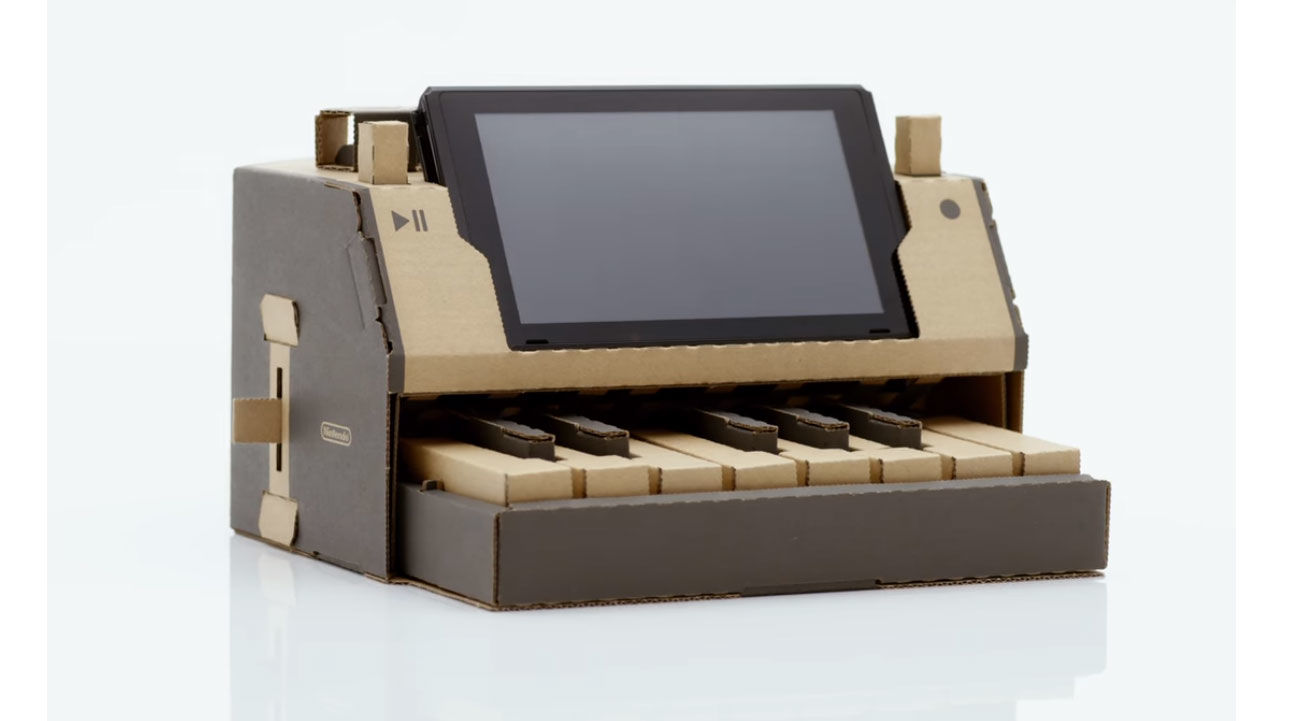 Have you, like us, wondered how the Nintendo Switch can play notes from a cardboard piano? Rather than somehow utilising the Joy-Con’s HD Rumble, it uses the right Joy-Con’s IR camera to read the internal workings of the keyboard and translate those notes to the console.

The Joy-Cons really are at the centre of Toy-Cons, and can be used in new and inventive ways. Want to build a cardboard robot? Pop it out of the flat-packed cardboard, tape a Joy-Con to the rear and watch as the controller’s vibration motor makes it move.

And, being cardboard, it’s easy to customise, repair and replace your Toy-Cons if/when they get damaged. Nintendo will send out replacement parts, but you could just as easily glue/stick it back together with sellotape. It really is an interesting, environmentally friendly way to introduce gamers to a whole host of new accessories.

Since the initial announcement, Nintendo has introduced the Toy-Con Garage Mode for Labo. In a nutshell this lets players create their own way to use and play with the Labo accessories.

In what is basically a fun way to do a sort of coding, Labo uses will be able to control ‘nodes’ for both input, middle and output so you can decide what happens when you do certain things. It works in a similar way to ‘if this then that’ (ITTT).

“For example, an input node could be gently shaking the Joy-Con controller, a middle node could be a certain number of times shaken, and an output node could trigger a sound effect or a blinking light when the two previous actions occur,” said Nintendo.

The possibilities are almost endless so you could use the Labo fishing rod as a musical instrument or use the piano to steer the RC car.