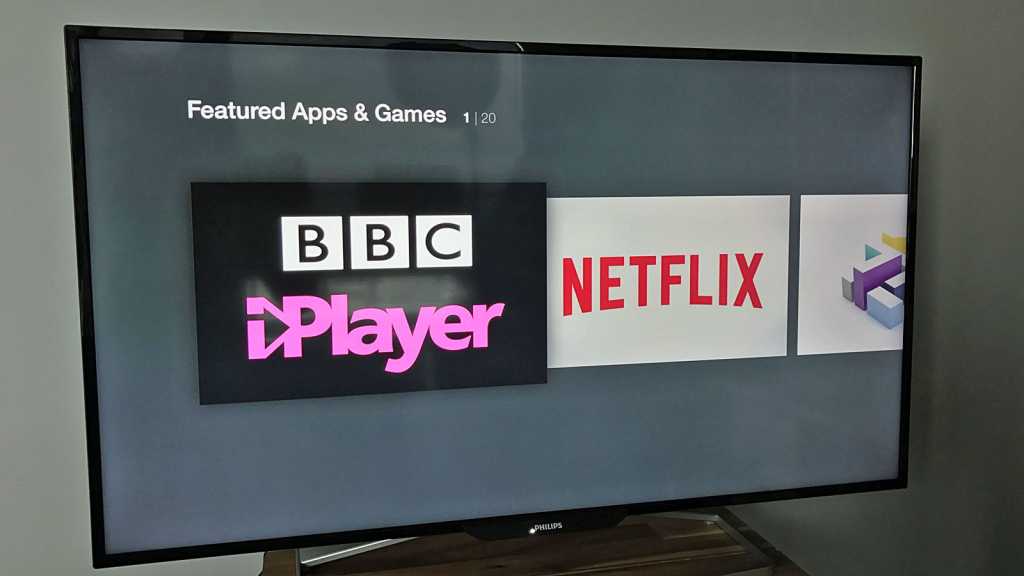 Amazon’s Fire TV is great media streamer, and it’s much cheaper than Apple’s 4K equivalent. The same goes for the Fire TV Stick which – in our opinion – is much better than the Chromecast for similar money.

Anyway, you already know this: you bought one and are looking for the best apps to install on it. And you’ve come to the right place, as we list the essential apps that should be on every Fire TV.

Before we get to the list, Google and Amazon have just announced that the official YouTube app will be available on Fire TV “in the coming months”. The old YouTube app was removed at the start of 2018 by Google, seemingly in protest at Amazon refusing to sell its Chromecast and other gadgets.

The two companies appear to have sorted out their differences, so much so that the deal will work both ways: Amazon’s Prime Video app will be able to stream to Google’s Chromecast and will also be available as an app on TVs and devices which run Android TV.

Until YouTube’s return, though, do check out Firefox below, though, as a workaround so you can watch YouTube on your Fire TV in the meantime.

Not everyone buys a Fire TV so they can use Amazon’s Prime Video streaming service. You don’t need a Prime subscription to use a Fire TV, a common misconception even if Amazon is probably happy that the confusion exists.

No, you can use your Fire TV as a way to watch Netflix. And if you have a 4K-capable TV and Fire TV you can watch all the glorious ultra-high-definition shows on offer. Just remember that you need a Premium subscription (£9.99 or US$13.99 per month) to access that 4K content.

We’re bundling all these into one here: you’ll find BBC iPlayer, All 4, ITV Hub and Demand 5 in the app store and since they’re free apps you might as well install them all so you can more quickly watch what you want when there’s a show on one of these four main services.

Don’t forget about UKTV Play, too, which lets you watch some shows from Dave, Drama, Really and Yesterday. If you haven’t watched Taskmaster on Dave, it’s a must.

Some apps – including iPlayer – now require you to register and sign in, but this has benefits for you as well as it’s easier to continue watching a series without having to remember which episode you last watched. Search history is usually saved, too.

It might seem odd to install a web browser on a media streamer, but the latest update to Mozilla’s broswer for the Fire TV includes a handy bookmark for – you guessed it – YouTube. That saves having to search Google for the website or enter the URL using the direction pad on the Fire TV’s remote control.

Then, you can use YouTube as normal. Well not quite as normal because you’ll still have to use the remote to search for specific videos as you can’t use the voice search function on the website: that’s only available within the app.

Plex is one of the most popular media streamer apps, although it’ll only interest those that have a collection of videos stored on a PC, NAS drive or some other hard disk that’s attached to your home network.

It’s essentially like a local Netflix with a slick interface and is great for watching your home movies or those DVD rips (backups of your DVD collection, naturally).

Kodi is much like Plex, but with more controversy. The interface isn’t as nice and it’s aimed more at, shall we say, computer enthusiasts than the average couch potato.

Kodi isn’t available in the app store on your Fire TV, but we’ve written a handy guide which explains how to install Kodi on a Fire TV.

VLC is another media player, and should be familiar a lot of Windows users as it’s one of the must-have Windows apps as it’ll play just about any video format and can often play incomplete or corrupt files that other video players won’t.

Like Plex, it can stream videos from your home network, or it can play those downloaded and stored in the Fire TV’s on-board storage.

You can also read our guide on how to install apps on your Fire TV if you’re unsure how it all works.